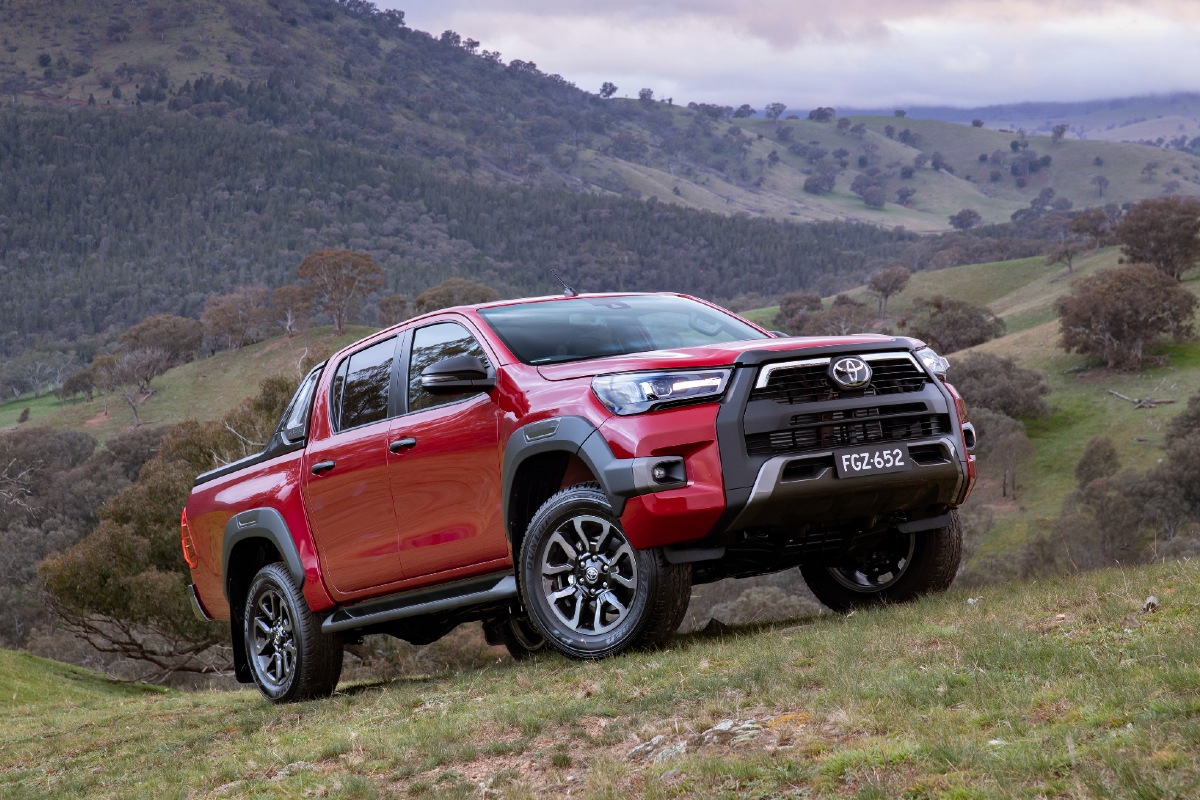 For starters, the HiLux is Australia’s most popular new vehicle. Secondly, the HiLux Rogue is a hero model introduced to counter the popularity of the Ford Ranger Wildtrak and Raptor.

While Toyota Australia didn’t make a high performance version of the HiLux (but that’s coming with the next-gen model), the Rogue adds more grunt, retuned suspension and extra sophistication to create a more polished dual-cab ute.

Toyota Australia played an active role in developing the Rogue (and its more off-road capable sibling, the HiLux RuggedX) which speaks to the importance of this country to the Japanese giant. Toyota Australia’s design studio helped create the new look for the Rogue, which includes a dark vertical grille, dark-surrounds for the LED headlights, new wheel-arches and a unique sports bar.

The HiLux has formed the basis for Toyota’s factory-backed Dakar Rally campaigns in recent years. It’s probably stretching things to say the HiLux that Nassar Al-Attiyah and Giniel de Villiers drive have helped shape the current model, but that looks set to change. Toyota is believed to be working on a new hero model for the next-gen HiLux that will be part of its Gazoo Racing range of performance cars, joining the GR Supra and GR Yaris (Toyota Australia trademarked the name ‘GR HiLux’ last year). This will be a direct rival to the Ranger Raptor and is expected to be packing the brand’s new 3.5-litre twin-turbo V6 petrol engine, which has already been installed in the new Dakar entries as a preview.

While we’re waiting for the arrival of the twin-turbo V6, the current HiLux is powered by a 2.8-litre four-cylinder turbo diesel. At the time of launch it was a boost over the standard HiLux range, with 150kW of power and 500Nm of torque (up from 130kW/450Nm), but since then Toyota has introduced the new engine across the line-up. 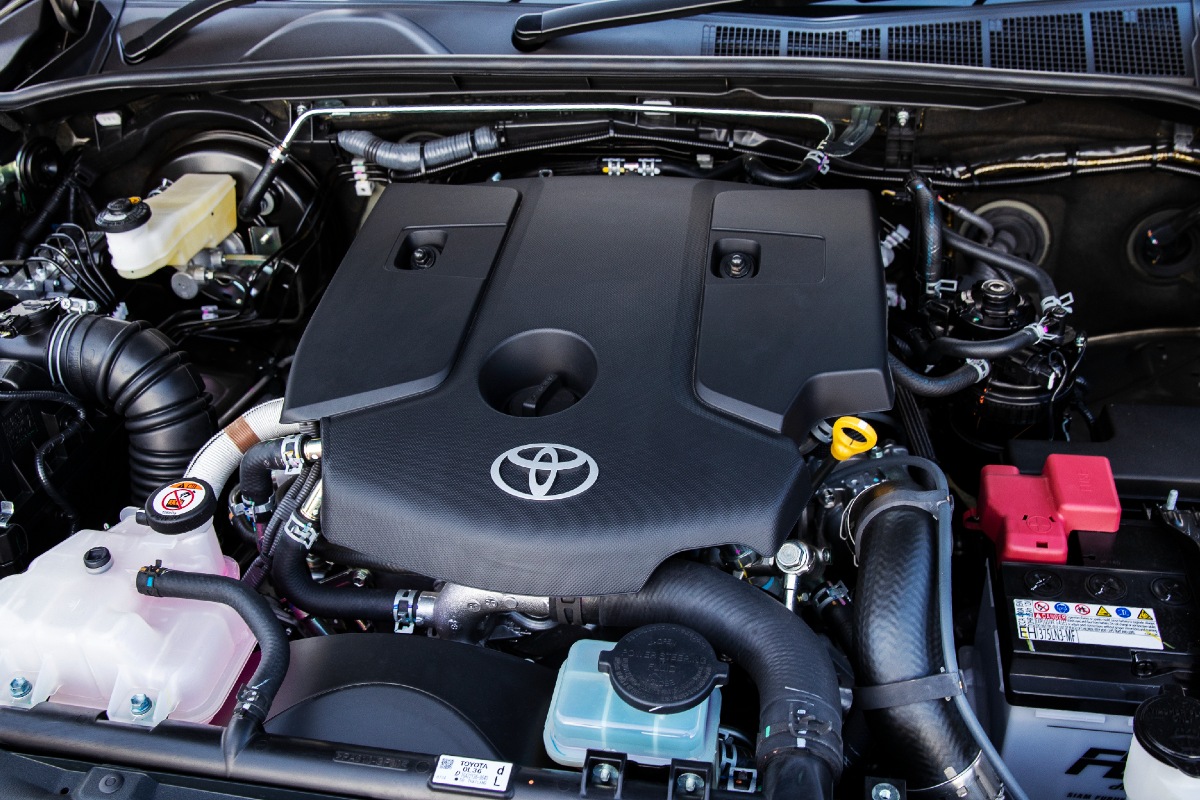 While it doesn’t sound particularly powerful, that 500Nm endows the HiLux Rogue with plenty of strength. There’s ample pulling power off the line and when you put your foot down for a surge of acceleration. While not quite in the same league as Volkswagen’s potent V6 turbo diesel Amarok (190kW/580Nm), it’s not far off Ford’s twin-turbo four-cylinder Raptor (157kW/500Nm).

However, the Raptor feels quicker because its 10-speed automatic transmission does a better job of maximising the engine’s capability, whereas the HiLux is held back somewhat by its six-speed auto.

Still, for what it is – a dual-cab ute – the HiLux Rogue feels punchy and has ample grunt for most duties.

Acknowledging that the Rogue is aimed at people wanting a premium ute experience, rather than a workhorse, Toyota revised the rear suspension to improve ride quality when the tray is empty.
The company also re-worked the power steering for better low-speed response. For both of these areas Toyota Australia played a major role in shaping the change. The result is a much nicer ute to drive. The new suspension set-up gets rid of some of the fussiness and jiggling that tends to trouble utes without some weight in the tray. But that’s not to say they’ve made it a show pony, the payload is still rated to 819kg and it has a maximum braked towing capacity of 3500kg.

The steering was already an under-appreciated strength of the HiLux, but the changes to the Rogue only enhance its driving character.

It still leans into corners and doesn’t turn with the sharpness of a car, or even an SUV, but in comparison with its ute peers the HiLux is near the front of the pack.

Given it’s designed for weekend adventures rather than weekday work, I’d love to tackle some Dakar Rally-style sand dunes in the Rogue. It’s an ideal ute for daily commuting and weekend fun, so some dunes or even some muddy tracks would be an ideal playground for it.

It’s the standard HiLux design for the most part, but with a few small touches that let you know you’re in the Rogue. The layout and design is more functional than stylish, with all the controls falling easily to hand including the 8.0-inch infotainment touchscreen.

The Rogue extras include the leather-accented seats and a nine-speaker premium JBL sound system which includes extra speakers mounted atop the dashboard. But it must be said, there’s plenty of hard-wearing plastics that do take away from the polished image the Rogue is aiming for.

Space is good in the cabin with ample room for four adults or two adults up front and three kids in the back seats.

The tray features a power roller tonneau cover, which was developed here in Australia, which is another convenience. For those used to a working class ute, the Rogue’s $68,990 (plus on-road costs) asking price may be confronting. But against its competition it stacks up relatively well.

A Ranger Wildtrak starts at $62,390 and the blue oval runs up to $79,390 for the Ranger Raptor; but that’s definitely a more capable off-road machine based on our experience.

The Nissan Navara PRO-4X Warrior looks sharp at $67,490, and it benefits from an Australian engineering program led by Premcar. Honestly, as impressive as the HiLux Rogue is, the competition in the ute segment makes it hard to commit to answering this question. With a new Ranger coming in 2022, a new Amarok to follow shortly after as well as the impressive Nissan Navara, not to mention the new HiLux due in 2023, choice is not in short supply for ute buyers.

But having become reacquainted with the HiLux Rogue, I certainly understand why so many people buy this Toyota. It was already dependable and hard-working, but the Rogue adds another layer of appeal with its upgrades.