Why SEMA is the coolest motor show in the world

Why SEMA is the coolest motor show in the world There are none left in Australia and around the world people are losing interest in looking at shiney cars on static displays.
Especially when the modern car dealership does a nice job of that anyway. Plus, a modern motor show is a hugely expensive exercise for car makers and they appear to be tiring of spending the money as smaller crowds turn up.

CLICK HERE FOR AN EXTENDED IMAGE GALLERY FROM SEMA

But there is one motor show in the world that is not only surviving but flourishing. It’s called the SEMA Show, which stands for the Specialty Equipment Market Association, and it holds an annual event in Las Vegas that draws a massive crowd and generates plenty of attention around the world.

As the name implies this isn’t a standard car show, this is designed to highlight everything in the world of aftermarket parts and accessories as well as car customisation. Which means nothing at SEMA is like a normal motor show.

Despite that, manufacturers have learnt the value of SEMA over the years and now the big brands have massive displays at the event. Ford has dozens of cars on show – everything from the Ford GT MkII to modified Rangers.

The show is so big it doesn’t even fit inside the Las Vegas Convention Centre’s four massive halls, instead it spills out into the carpark and forecourts with cars on display in seemingly every nook and cranny.

But it’s not just static displays, the outside area features a huge drifting pad (where none other than Ken Block shred tyres in his Ford Escort) as well as a burnout pit (sponsored by Block’s own Hoonigan brand).

The crowd throughout the event is immense, which is made even more remarkable by the fact SEMA is an industry event and not open to the public. It underscores just what a huge industry the aftermarket space is because people just love making cars their own.

Of course there are too many cars to go into detail about all of them, but we’ve selected some of our favourites here at Torquecafe.com

There are so many special cars it’s impossible to pick the best (without filling up the internet) but the best place to start is the Toyo Tyres stand.

Well, it’s not technically a stand, instead the tyre company takes the space between the Central and South halls and fills it with exotic machinery.

This year’s line-up included the remarkable Button Built Ferrari F355, also known as the BB355TT. Mitchell Button has developed a reputation in the customisation world for producing remarkable Ferraris for – and this year was no different.

The BB355TT started life as 1999 F355 Berlinetta but he added a pair of turbochargers, stretched bodywork and massive 15-inch wide rear rubber.

Sharing the Toyo space with the Button Ferrari was a car dubbed the ‘Evil Evo’ – Mercedes 190E Evo that was far from stock. Under its DTM-spec bodywork was a twin-turbo Chevrolet LS3 V8 making nearly 1200kW of power.

Another Ferrari that attracted plenty of attention (away from the Toyo stand) was the 1991 348 ts of Australian supermodel Jess Hart. It was produced by Los Angeles-based creative agency Race Service and features a range of track-inspired additions.

Star of the show Each year there is one car that seems more popular than any other. Unsurprisingly in 2019 that car was the new Toyota Supra, with tuners going to town on the new A90 model.

There were officially sanctioned twists on the new model, including GR Supra Heritage Edition that harked back to the 1990s and the GR Supra 3000GT Concept.

Then there were more radical interpretations, such as the big-winged Supra from Japanese aftermarket giant HKS and road-hugging version from Air Lift Performance.

All shapes and sizes 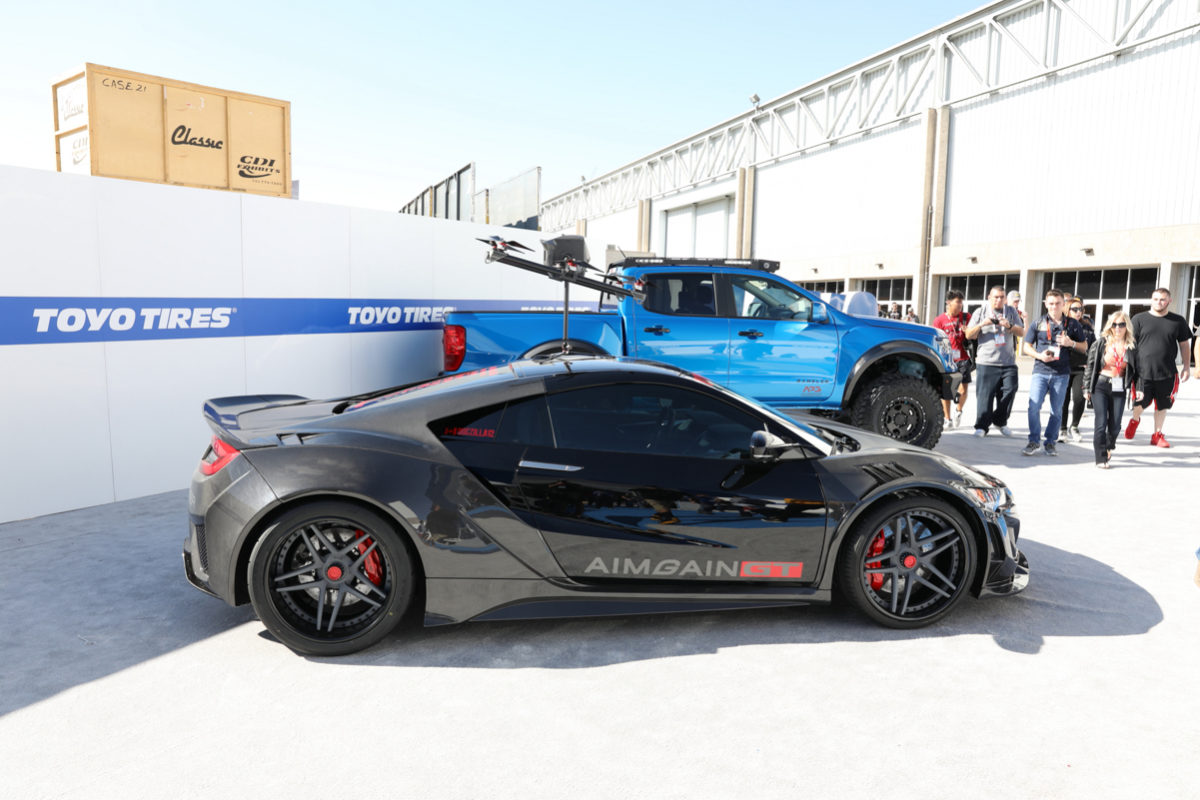 SEMA covers everything aftermarket and that includes off-road accessories, so naturally there are plenty of SUVs and 4x4s on show.

From jacked up Jeeps to lowered Ford Rangers and even off-road ready soft-roaders like the Honda CR-V, SEMA has it all.

For example, it’s the only place in the world where you can find a Mercedes-AMG G63 dropped so it hugs the road, and running on Toyo Proxes R888R track-spec tyres.

While another special project on display at Toyo was the Baja 911 from Russell Built Fabrication.

The classic 911 ditches the racetrack for off-road racing, with off-road suspension that creates 305mm of wheel travel, rides on nobby off-road tyres and gets a full rollcage in case you tip over in the dunes.

There’s also underbody protection and a luxurious but purposeful interior.

If you want one, the company is building a limited run. The catch is the price tag: a cool $1.7m.

That’s a tiny taste of what SEMA has to offer. It really is too big to capture, the best thing you can do is find a way to beg, borrow or steal (well, maybe don’t break the law) a pass for it one year. It has to be seen to be believed.

In the meantime, make sure you check out our exclusive gallery of images from this year’s show.