Bespoke design, chilled champagne, custom luxury watches – all elements of a car so expensive that even Rolls-Royce won’t admit the price.

Customisation is the buzzword of modern car buying. Everyone wants their car to feel special or unique, and it’s not a new trend, it’s why car companies have offered you a choice of colour since the early days. But in modern times choosing a colour from a short-list isn’t enough, especially when it comes to high-end exotics like Rolls-Royce.

Which is why the British brand has announced it’s re-introducing its Coachbuild department to build one-off creations from suitably wealthy clients. And to showcase this revival Rolls-Royce has unveiled its most expensive car to date – the Boat Tail.

Torsten Müller-Ötvös, Rolls-Royce chief executive explained that the return of Coachbuild is part of the brand’s return to its historical roots, as back in the earliest days of luxury motoring owners would often commission unique coachbuilt bodies for their cars. “Historically, coachbuilding had been an integral part of the Rolls-Royce story,” Müller-Ötvös said. “In the contemporary Rolls-Royce narrative, it has informed our guiding philosophy of Bespoke. But it is so much more. Rolls-Royce Coachbuild is a return to the very roots of our brand. It represents an opportunity for the select few to participate in the creation of utterly unique and truly personal commissions of future historical significance.

“Rolls-Royce has carefully listened to its closest clients, each of whom has expressed a desire to deepen their relationship with the brand by creating ambitious, personal statements of true luxury. Rolls-Royce Boat Tail is not a concept created to be retrospectively sold.

“Quite the contrary. Rolls-Royce believes in complete authenticity and Boat Tail is the culmination of a four-year collaboration with three of our most special clients.” 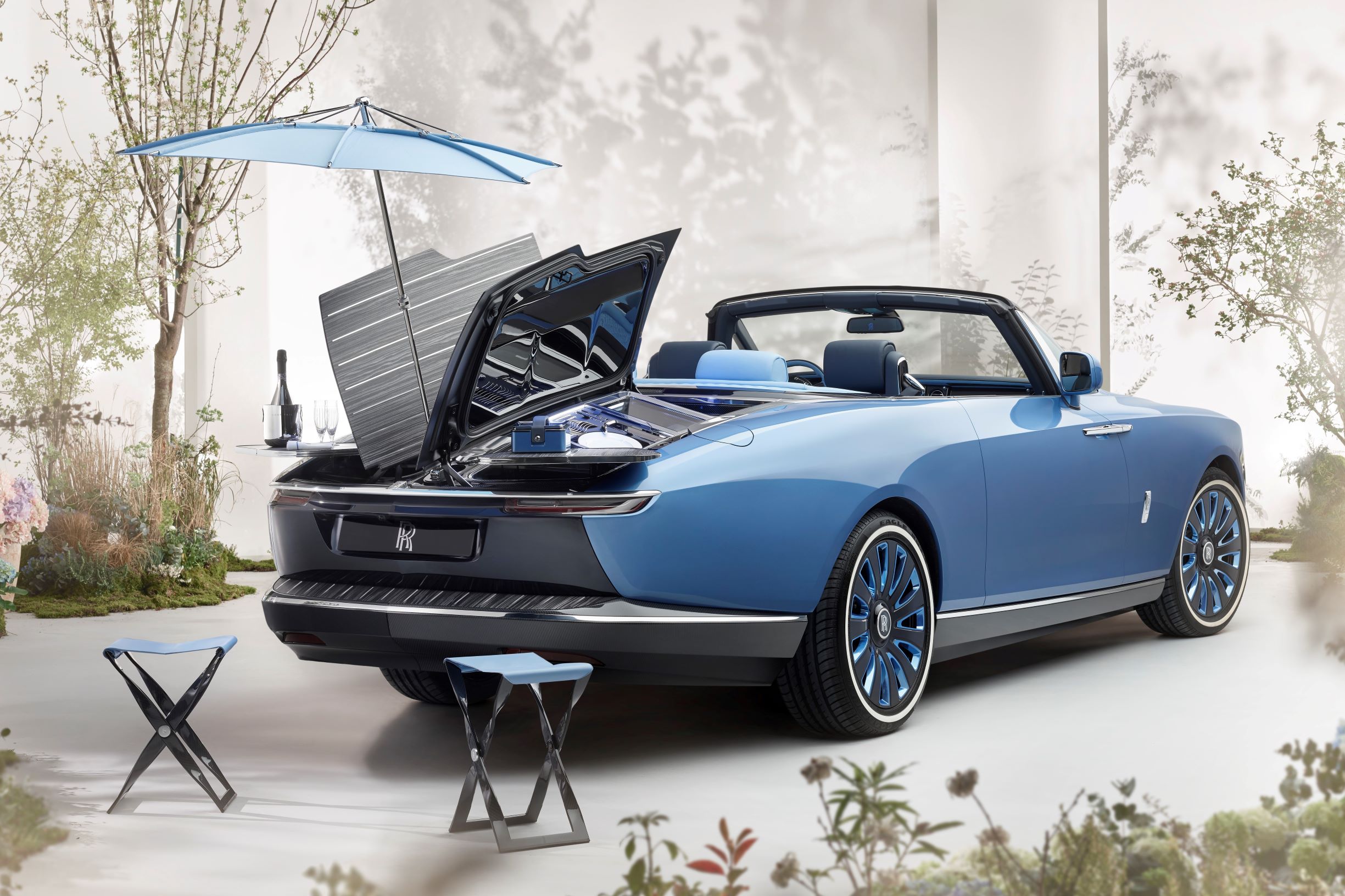 The Boat Tail is rumoured to be the world’s most expensive car, with every aspect produced in collaboration with its owners with no expense spared. Rolls-Royce won’t say how much, but a report from Britain’s Autocar publication claims it could be as much as £20 million ($36m).

There’s a lot of car for the money, though. The Boat Tail is designed to look like a luxury yacht (hence the name) and measures 5.9m, even though it’s a two-door convertible. Under the bonnet is a 6.7-litre twin-turbo V12 engine, reportedly making 420kW of power.

But it’s not the power or performance that sets the Boat Tail apart – it’s the design and its luxury elements that elevate beyond typical prestige cars.

According to Rolls, the husband of this Boat Tail owning power couple is an avid collector of Grandes Marques de Champagne, so naturally this was incorporated into the car. There’s a fridge built into the tail of the car, which allows the champagne to chill to the precise six-degrees the owners demand. The Boat Tail owner is a champagne connoisseur

To enjoy it, they can sit on the bespoke designer stools underneath the automatic parasol that’s also hidden beneath the tail. Naturally the stools aren’t from Bunnings, but instead created by Italian furniture maker Promemoria and trimmed in the same leather as the cabin.

Another very luxurious touch are the pair of ‘his and her’ timepieces created specifically for a Boat Tail customer by Swiss craftsman, Bovet 1822 – because why spend millions on a car without matching expensive watches. The two hand-crafted timepieces have been designed both to be worn on the wrist or can be placed into the centre fascia of the car to act as the car’s clock.

Rolls-Royce isn’t the only company making these custom cars, low volume models have become big business for prestige car companies. Ferrari is one of the most proliferant , with its special project division building a number of one-off supercars, including the SP12 EC for legendary musician Eric Clapton. More recently it unveiled the stunning, track-ready, P80/C in 2019 and the 812 Superfast-based Omologata in 2020.