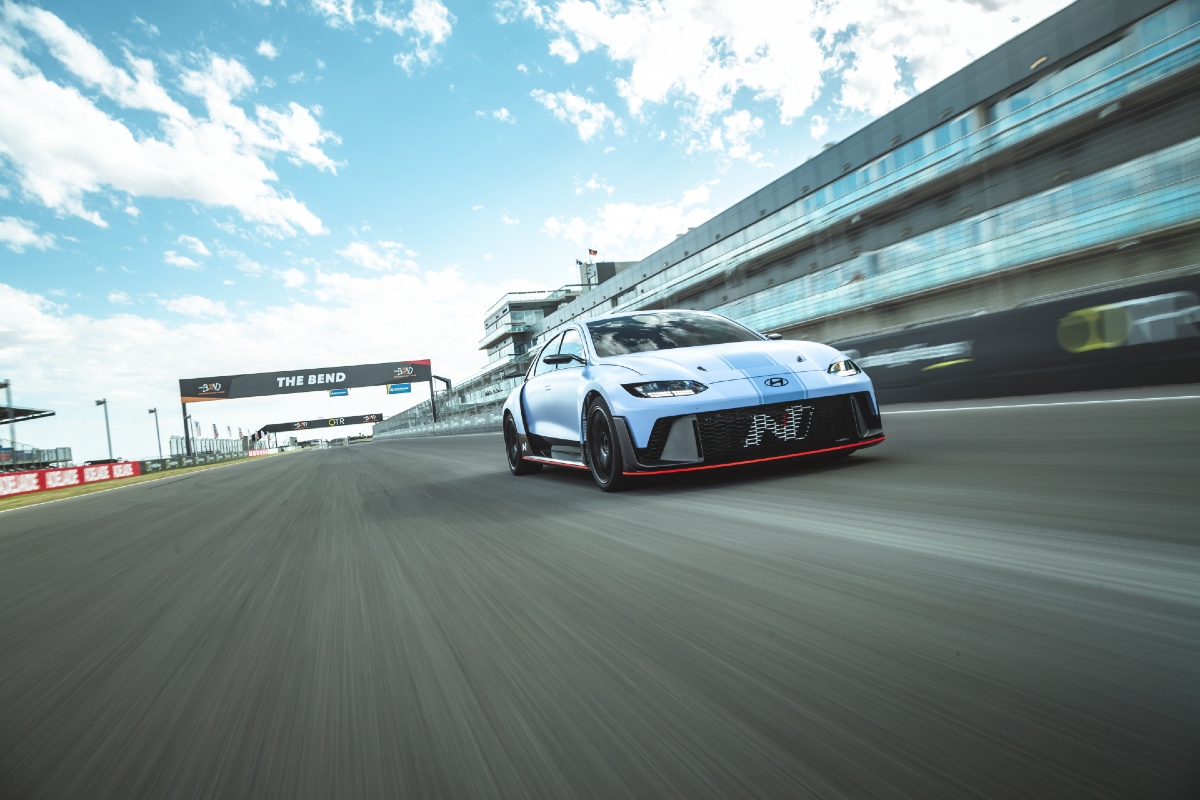 Hyundai calls it a ‘Rolling Lab’ and it previews the brand’s upcoming all-electric performance cars. While most car companies produce ‘concept cars’ to showcase a future model that look the part but often don’t drive, the RN22e Rolling Lab is a functional prototype that the company is happy to let the media experience so we can give you an understanding of what’s around the corner.

The RN22e is an obvious preview of the upcoming Ioniq 6 N, but before that the all-electric powertrain and its ground-breaking technology will form the basis of the Ioniq 5 N that’s due to hit Australia in 2023. 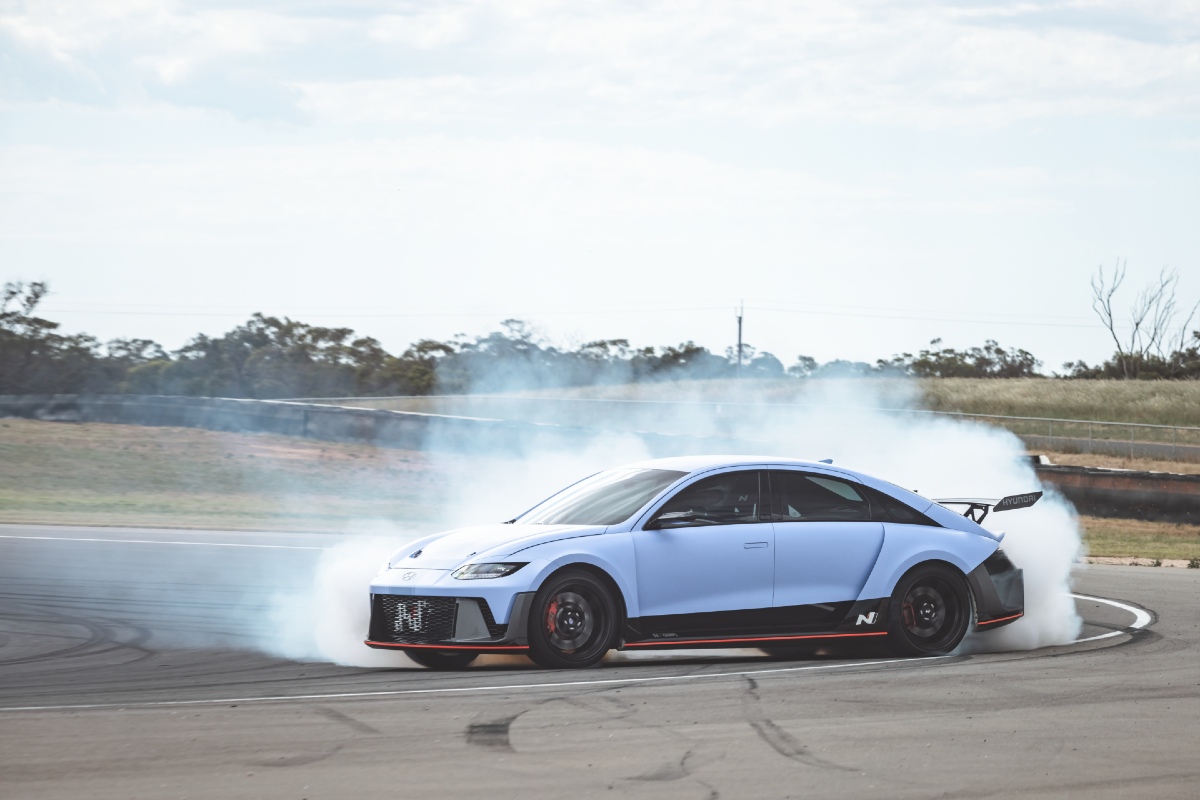 Because we can’t drive it on the road. The RN22e in Australia is one of only two of its kind in the world. Hyundai Australia managed to get it into the country as a star attraction for its recent N Festival at The Bend.

It was unveiled earlier in 2022 at the Busan Motor Show in South Korea (alongside the hydrogen-electric hybrid N Vision 74) and has previously only been sampled by a limited number of international media.

The other reason it deserves a track test is simple – it’s a really quick car, the most powerful ever built by Hyundai, so it needs a venue that allows you to explore its full potential. 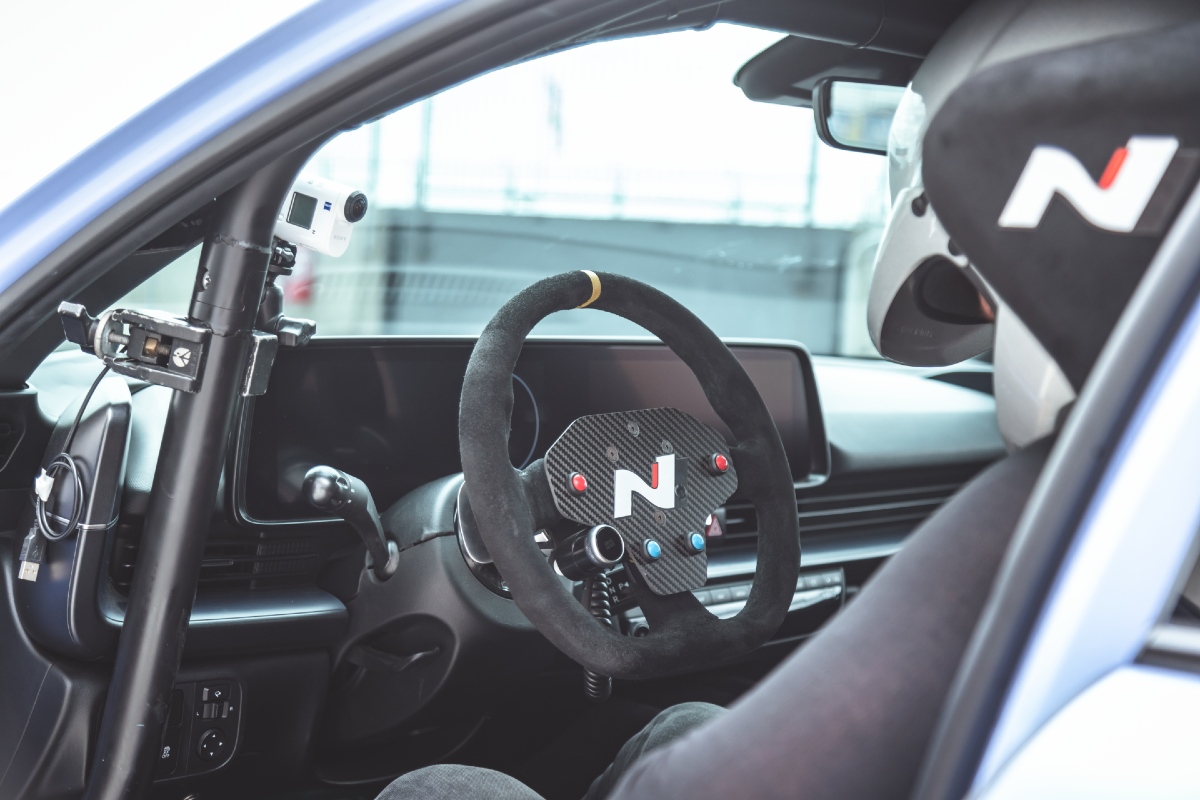 It’s actually a somewhat odd mixture of parts from the Ioniq 6 production car with some racing touches. For example, the digital dashboard, gear selector and indicator and wiper stalks are all production parts, but we sat in a racing seat with harness and the car uses a race-style steering wheel.

There’s also a rollcage and no carpets that adds to the motorsport motif and underlines this car’s purpose as a test bed for the future of N performance cars. 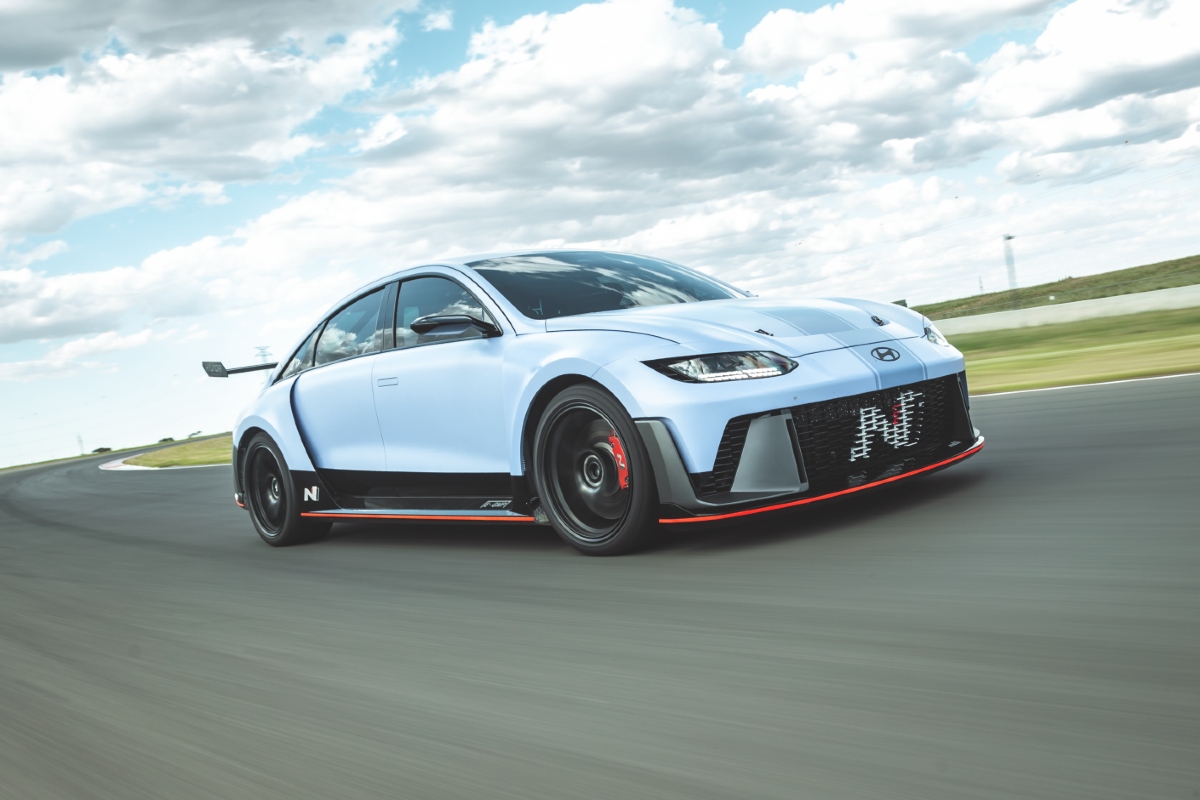 The RN22e is powered by the same dual-motor set-up seen in the recently revealed Kia EV6 GT. That means the two motors combine to make 430kW of power and 770Nm of torque that is set to the road via all-four wheels.

However, the Hyundai does get some new elements that the Kia misses out on. Starting with a unique battery and inverter which have been designed to endure more track use, which is in keeping with the Hyundai N image of building racetrack-ready performance cars.

But the most interesting elements are arguably what the company is calling N e-shift (NES) and N Sound Plus (NSP). These are a virtual gear-shifting system and an artificial soundtrack for the car, respectively, which are designed to retain some of the emotional experience Hyundai believes attracts performance drivers to its N models.

Out on The Bend circuit the RN22e impresses with its speed, in particular its ability to launch from the corners. We drove the car on track alongside owners during the N Festival and the RN22e had little trouble blasting past the likes of the i30 N and Kona N out of each corner.

The long front straight was no different. Driving an i30 Sedan N on the same day we regularly saw speeds just above 200km/h at the end of the straight, but the RN22e just kept going. It would hit 225km/h before we reached the braking zone for turn one.

That’s really only half the story though, because while our time was limited in the car, Hyundai was very keen for us to experience N e-shift and N Sound Plus and get our feedback.

The NES has been designed to feel like the company’s eight-speed dual-clutch transmission in the i30 N, i30 Sedan N and Kona N. Except, of course, the RN22e uses a single-speed transmission, so there are no actual gears to change.

Instead there are virtual gears, with Hyundai programming the system so that the motors build and lose speed depending on when you change the gear. They have even added a rev limiter, so when you hit maximum rpm the car slows with a jolt and you need to pull the steering wheel to go faster.

The N Sound Plus is a similar system to what is already found in the likes of the Porsche Taycan. It uses speakers in and outside the car to generate a simulated engine noise to add to the feeling of acceleration and deceleration that you typically get from an engine note.

Both these systems could easily be dismissed as gimmicks without experiencing them, but having sampled them they actually hold a lot of appeal. They don’t really make the car any faster (in fact, the NES probably makes it slower) but they do make you feel more engaged as a driver and that’s the whole point.

Plus, if you do hate them and think they’re gimmicky, both systems will be able to be switched on or off whenever you drive the Ioniq 5 N. 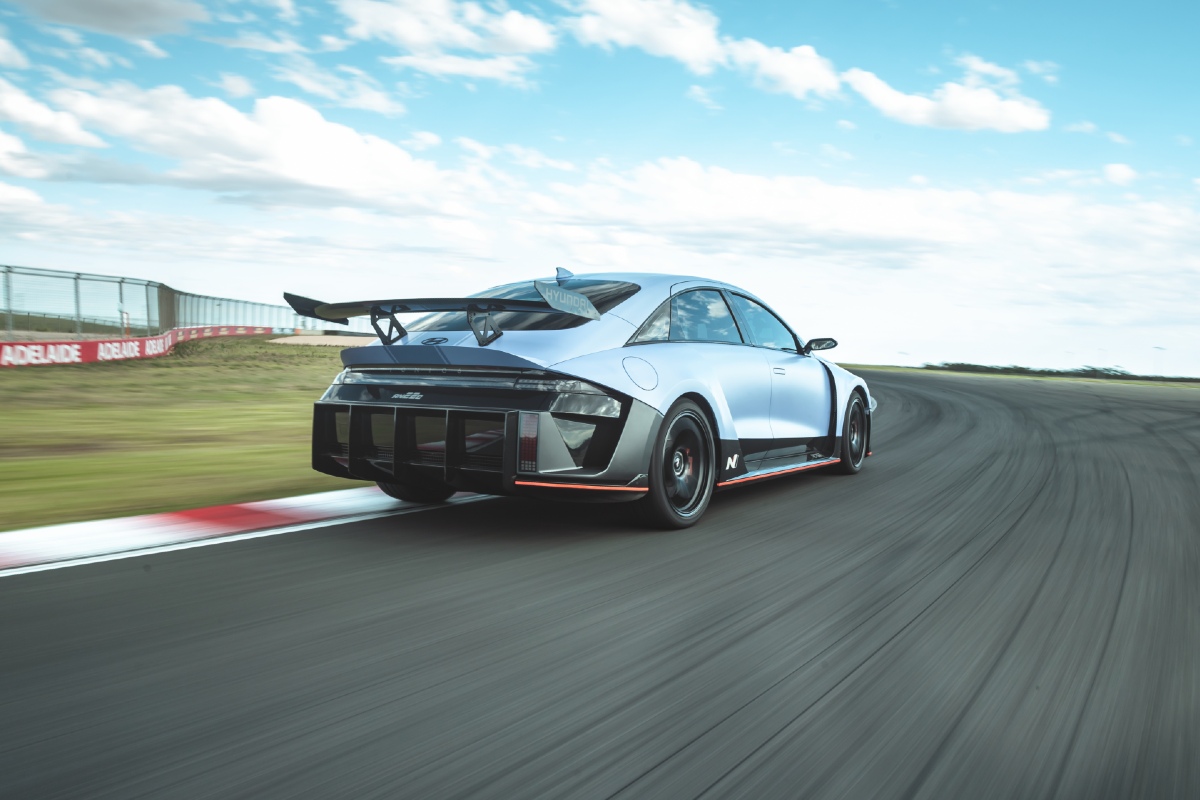 It’s hard to know exactly how close to production the chassis and aerodynamic package of the RN22e is to the Ioniq 6 N – and it certainly doesn’t look anything like the Ioniq 5 N will – but we can say the RN22e impressed with its handling.

Unsurprisingly given its large battery pack the RN22e does feel very heavy when cornering and braking, but it finds a way to get the job done.

That shouldn’t be too surprising though, as it not only has a large aero package but was also rolling on track-spec Pirelli P Zero Corsa tyres. While those tyres are tricky when cold, leading to some minor drifting on our first lap out, when warm they provide excellent grip.

The car cornered relatively flat and had good turn-in thanks to its direct and responsive steering. It also comes with a system Hyundai is calling electronic torque vectoring by twin clutch (e-TVTC), which uses a pair of clutches on the rear axle to direct drive where needed for sharper turning.

This all helped it carry good speed through the corners and coupled with the electric powertrain it felt rapid at The Bend, keeping with Hyundai N’s goals of a ‘corner rascal’ with ‘racetrack capability.’ 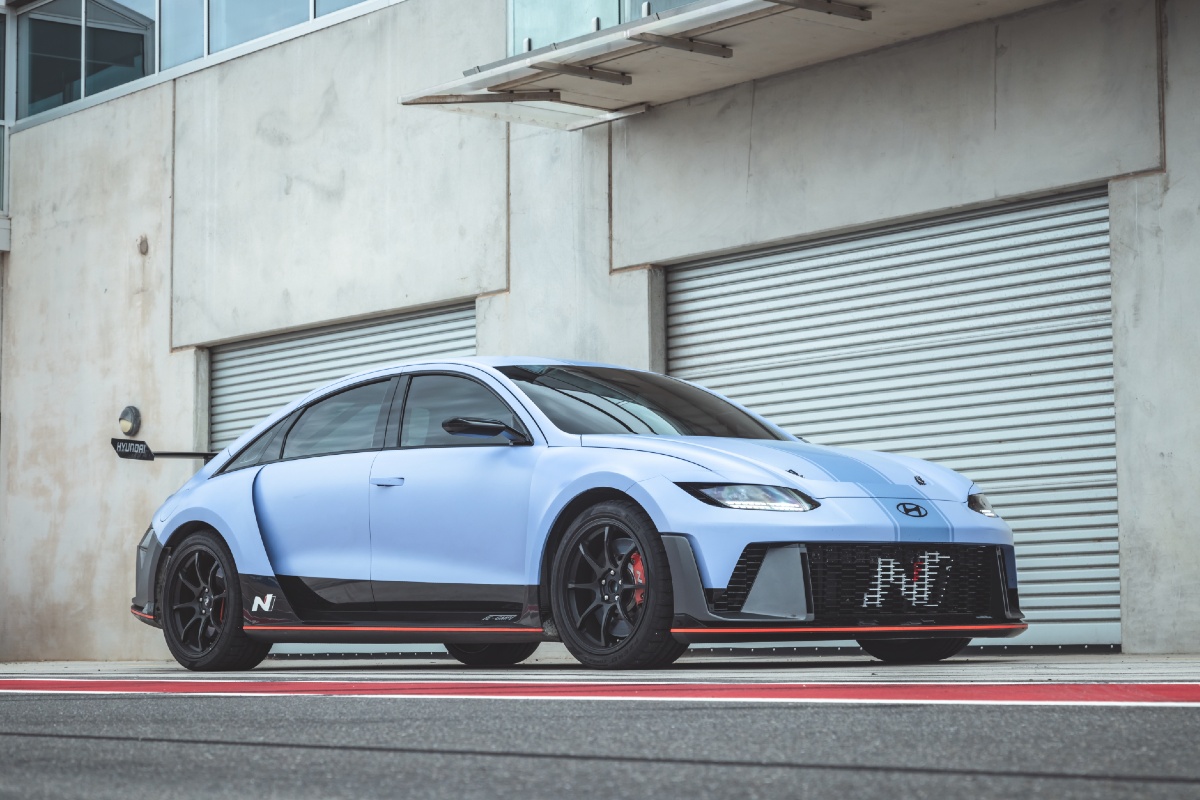 Hyundai has confirmed that it’s unlikely to build any more all-new petrol-powered N models in the future and will instead focus on an electric future. Before driving the RN22e I was disappointed about that fact because the South Korean brand has done a great job of building exciting and engaging cars like the i30 N and i20 N.

However, getting behind the wheel of the RN22e demonstrates that the future of Hyundai N is headed down a promising path. Given this isn’t the finished article there’s reason to hope that the Ioniq 5 N and eventually the Ioniq 6 N will elevate Hyundai N to the next level of performance with its more potent electric powertrain and new technology.

It gives Hyundai a chance to become a real front-runner in this shift towards electric performance the future will bring.