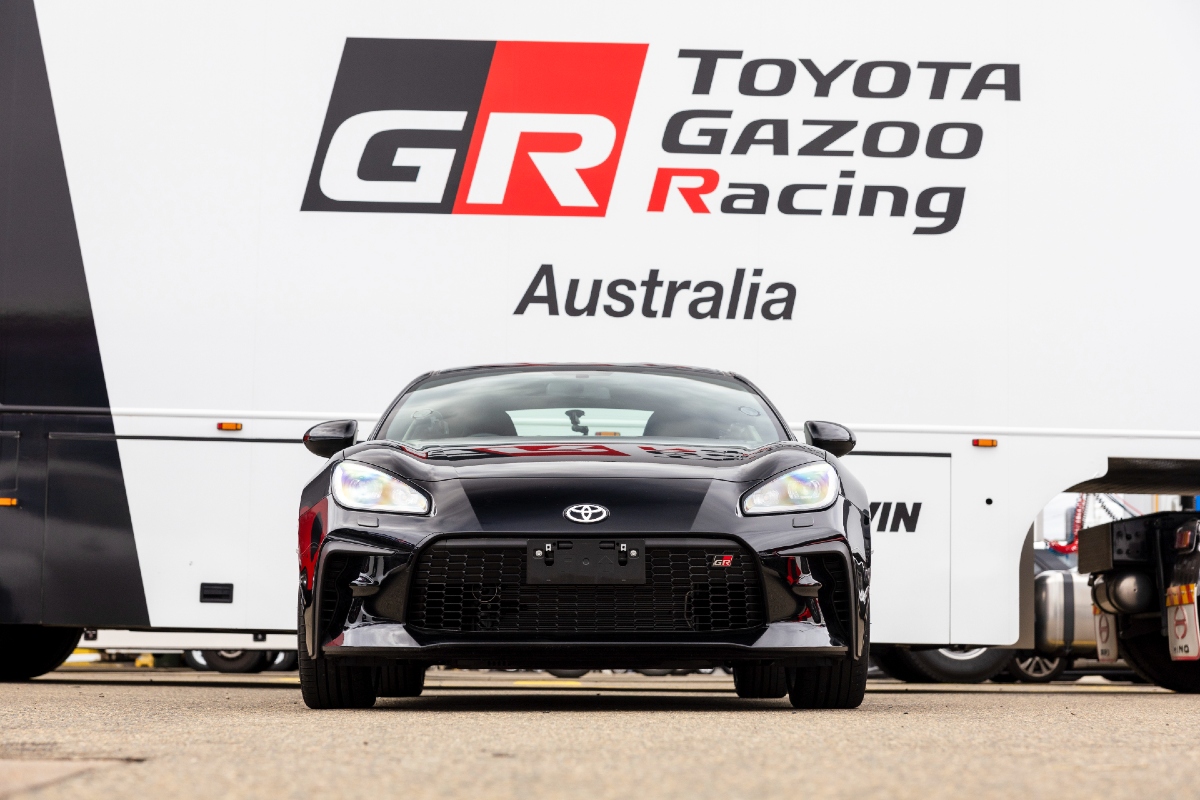 The long-awaited sequel to Toyota’s game-changing sports coupe. It’s been a decade since it arrived and helped usher in a new era of more exciting vehicles from a brand often criticised for its ‘whitegoods-on-wheels’ approach.

Since the arrival of the original 86 the Japanese giant has introduced its Gazoo Racing performance sub-brand as well as the GR Supra and GR Yaris to ramp up the excitement in its showrooms.

Now comes the new GR86, which no longer has to carry the brand’s performance hopes alone but does have to live up to the wide acclaim of the original. The out-going 86 was often criticised for its modest performance, with only 147kW of power available, but its lack of grunt made it a fun car to drive on the road because it could be pushed hard without worrying about necessarily breaking the speed limit. But on the track it was a little underwhelming, with more focus on driving enjoyment rather than outright performance.

Toyota has taken the criticism of the lack of power to heart and has improved the outputs with the introduction of a new, bigger-capacity engine. So with more power, more torque and grippier Michelin Pilot Sport 4S tyres the GR86 should be a much better proposition on the track than the old model. A completely overhauled cabin design that addresses the other major area of attention for critics of the old model. The out-going 86 was, to be frank, a bit cheap inside, which wasn’t entirely surprising when you considered it started at the $30k mark.

This new model is expected to cost slightly more – closer to $40k – but the new interior looks much better presented, with a more cohesive design, intuitive layout and better materials. Much quicker than the old model thanks to its new, larger engine. Toyota has swapped the 2.0-litre four-cylinder boxer for a 2.4-litre version. This bumps power up to 174kW and torque to 250Nm; a boost from the previous 212Nm.

Toyota opted for larger capacity rather than a turbocharger which keeps the delivery more linear and that has some obvious benefits on the track. The extra power and torque is noticeable as soon as I roll out of pit lane, with a easy, smooth surge of speed when I bury my right foot.

It doesn’t take long to feel just how different this new engine is, as exiting turn two I press the accelerator as hard as I would have in the old 86 and instead of gently accelerating out of the corner the back end begins to slide. This is a revelation, especially considering the previous 86 was popular with drifters despite its struggles to break traction.

This new tail-happy trait makes it much easier to drift and slide around, especially in medium and fast corners, which will undoubtedly only enhance its appeal to the drift crowd.

But that’s not the only positive of the engine, the extra grunt also helps it punch out of the corners quicker and keep pulling hard down the straights. Down the front stretch at SMP the GR86 reached 180km/h and felt like it still had plenty left before we had to hit the brakes for turn one.

Our drive was in a pre-production example fitted with a six-speed automatic transmission and having left it to shift itself for a lap, we spent the rest of our time using the steering wheel-mounted paddles.

Left to its own devices the gearbox shifts well on track, holding gears to the redline and shifting down hard when braking at the limit.

The paddles obviously offer greater control but the car won’t allow it to rev too much when downsizing so if you like to engine brake it does it frustrating when it refuses to shift and instead give you a little rejection ‘beep-beep’.

The shifts themselves are good but do lack the crispness and urgency of a dual-clutch transmission. 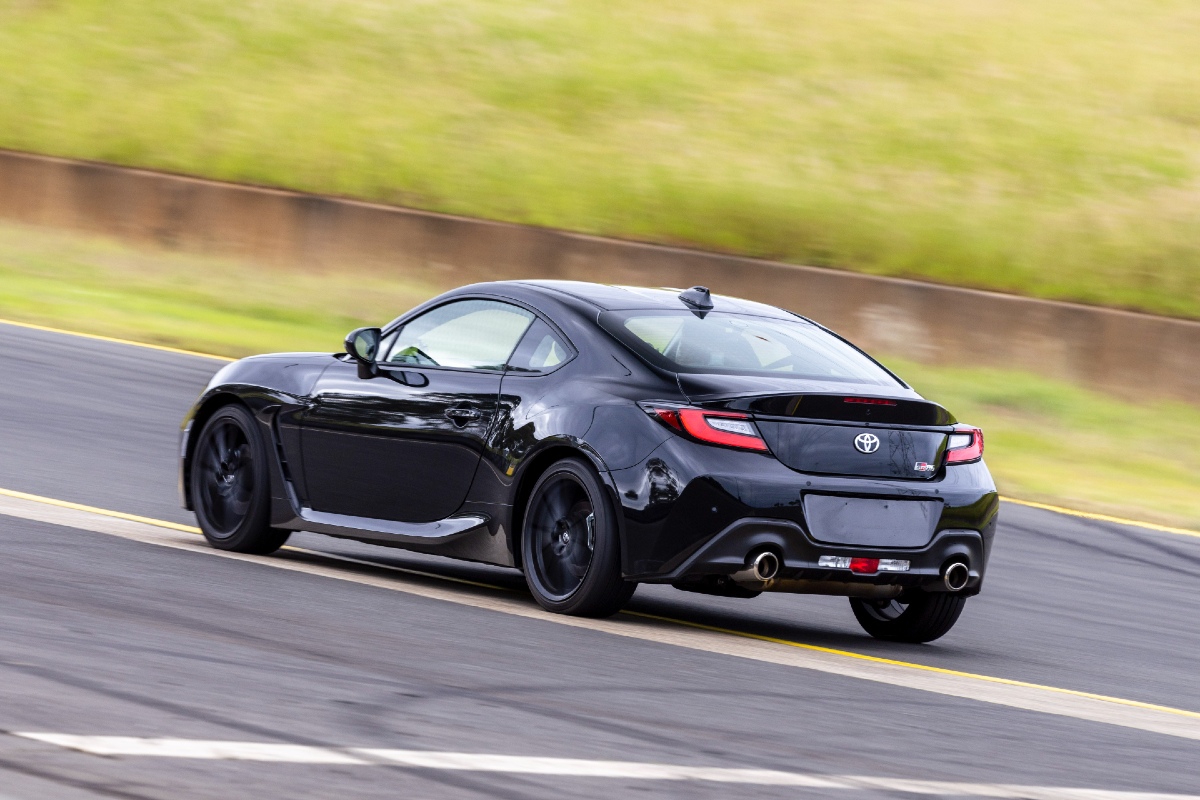 This ‘new’ generation model is really an evolution of the original, which is no bad thing because it was a well-balanced and deeply enjoyable car to drive.

Having said that, Toyota has made some major changes underneath to improve it. For starters the chassis has been strengthened, with torsional rigidity reportedly 50 per cent better now. Toyota also swapped its deliberately low-grip, Prius-sourced tyres for grippier rubber – Michelin Pilot Sport 4S.

Fundamentally the new model feels the same in character as the old model, but just a bit sharper in every respect. That means it retains that fun-to-drive character but can be placed with more precision on the track.

The steering is especially good, accurate and well-weighted, it was a highlight of the old model and thankfully Toyota has messed with a good thing.

Our test drive was only a few laps so we can’t comment on the endurance aspect of the brakes, but they felt strong initially with enough stopping power to allow you to push hard into the corners.

The balance between power, handling and enjoyment was one of the highlights of the original and despite the extra grunt, grippier rubber and tweaked chassis that balance remains. Sydney Motorsport Park was not an ideal circuit for the old 86, with the long straights and fast corners ill-suited to its modest power and low-grip tyres. On the contrary, the new GR86 feels at home on the big track.

The extra grunt combined with the gripper tyres makes it a much more competent track day car than the model it replaces. So if that’s your priority this is good news. However, the question remains whether these changes have impacted its on-road appeal.