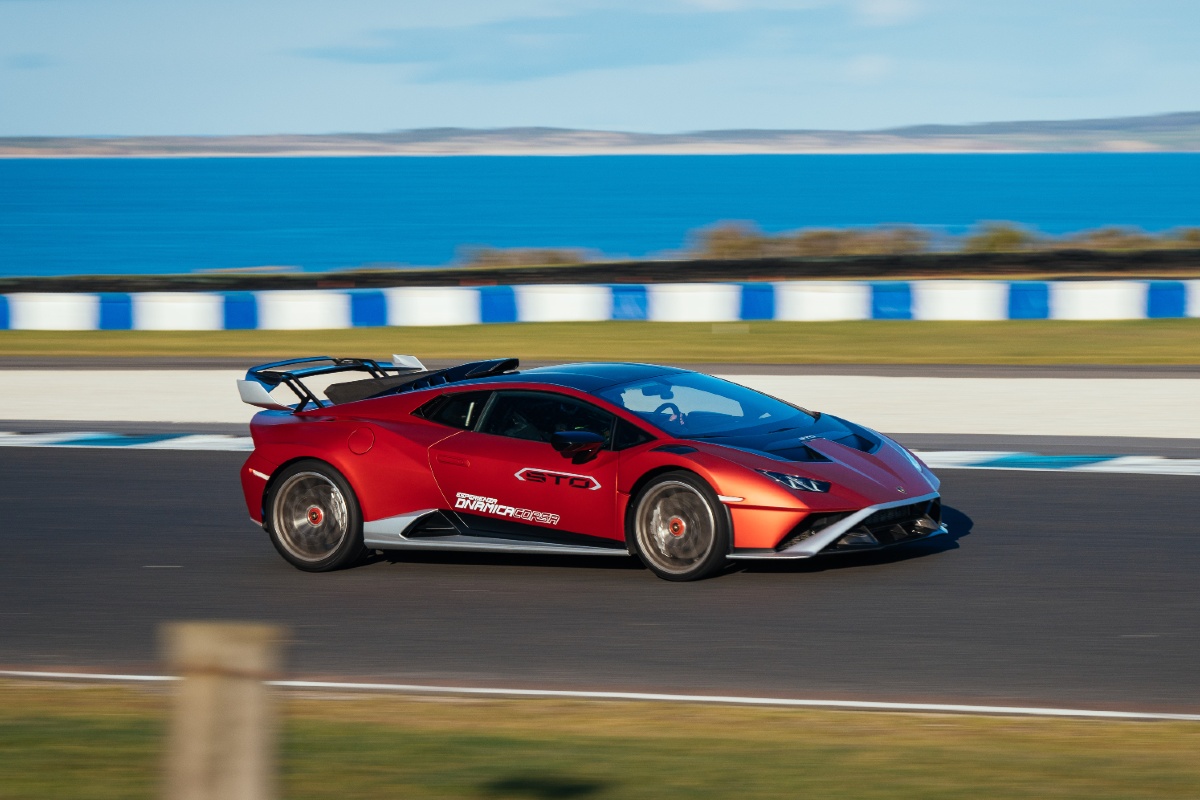 Lamborghini calls it “the purest incarnation of Lamborghini Squadra Corse heritage” – which is to say the closest thing you can buy to a Huracán GT3 racer that you can legally drive on the road.

The Huracán is getting older but the Italian brand is finding new ways to keep it exciting before its successor arrives in 2024. The STO takes elements from the GT3 and Super Trofeo one-make racer to create the ultimate street-legal, track day-ready supercar.

The name, STO, stands for Super Trofeo Omologata, which rams home just how closely-linked it is to its racing siblings. 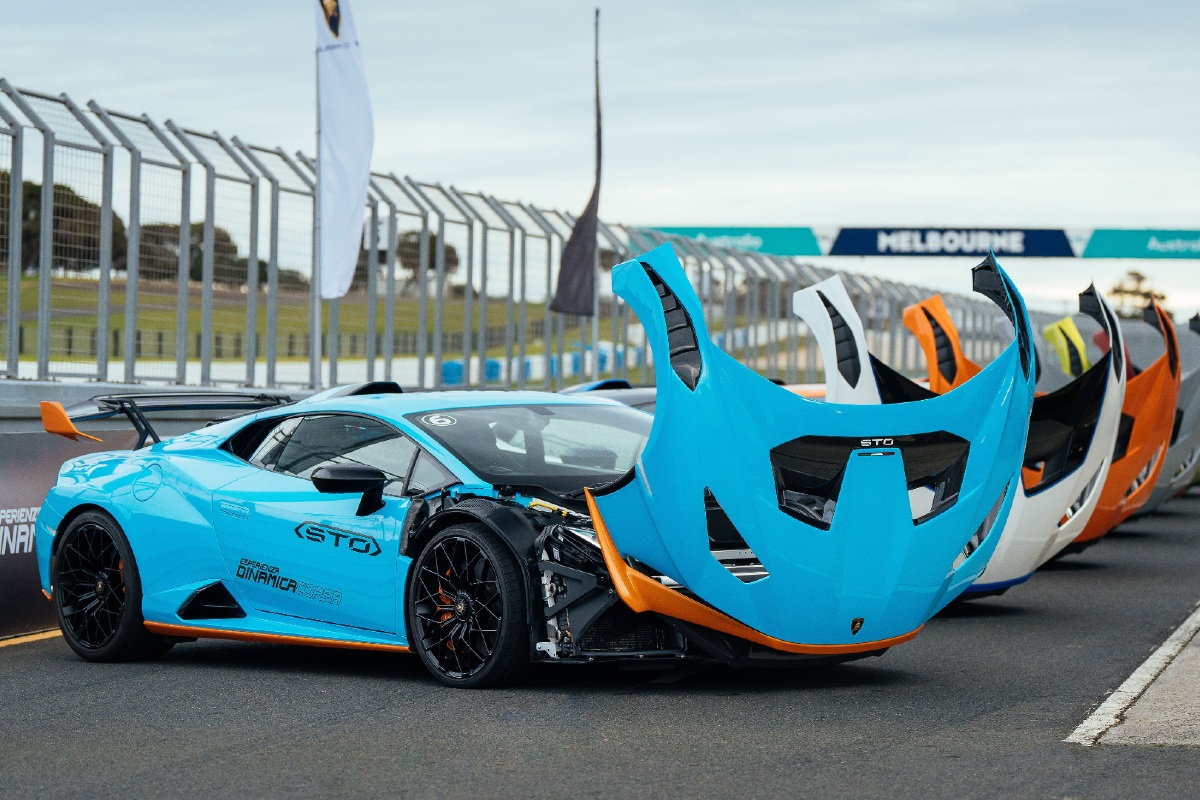 Because the track is what it’s designed for. From its V10 engine and rear-wheel drive layout to its complete re-worked bodywork and aerodynamics, the STO is all about connecting the brand’s road cars to its Squadra Corse racers.

Lamborghini even claims that around the Daytona circuit in the USA the STO is only two-seconds per lap slower than the GT3.

Make no mistake, this is a seriously focused piece of equipment. The aerodynamics have been reshaped, with new elements including the single-piece front-end, dubbed ‘confango’ by Lamborghini (confango is a mash-up of the Italian words ‘cofano’ for hood and ‘parafango’ which means fender). There’s also the unmissable roof-mounted air-intake and racing-style, adjustable rear wing that make it clear, even from a distance, that this car means business.

The good news for us is that Lamborghini invited Torquecafe to one of Australia’s best racetracks, Phillip Island, to experience the potential of the STO. The bad news for us was the weather was far from ideal, with rain and wind lashing the circuit throughout the day. Purposeful is the word that springs to mind. There aren’t wholesale changes to the rest of the Huracán line-up – the steering wheel, digital instrument panel and central infotainment screen are all the same – but there are unique elements for the track-focused STO.

Like the extensive use of carbon fibre and Alcantara for the trim. There’s no carpets, just floor mats and the doors ditch the usual luxury for a no-nonsense carbon look with fabric pulls to get in and out.

The windscreen is also new and 20 per cent lighter than the standard Huracán. So much so we were told not to attach a GoPro camera to it for fear it would damage it.

There are also full carbon fibre sports seats, trimmed in Alcantara. Unfortunately though, the combination of these seats and the dramatically low roofline means that anyone over 180cm will struggle to fit comfortably inside the cabin. This reviewer is just over 180cm and found the top of my helmet was touching the roof the entire time. It’s a shame, given that the STO is designed for the track where helmets are required, that the seat wasn’t either mounted lower or given greater adjustment to ensure taller drivers were more comfortable. 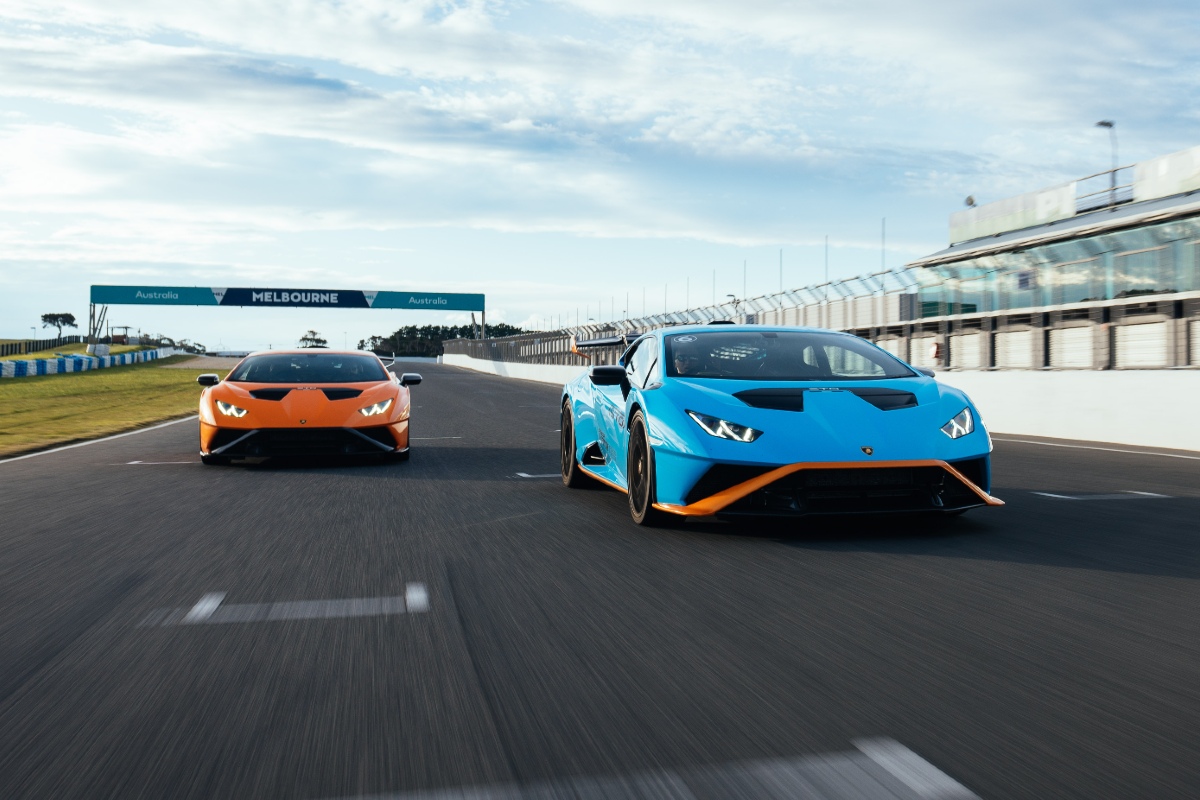 The STO is powered by the same 5.0-litre naturally-aspirated V10 as the rest of the Huracán range, but it’s tuned to make 470kW of power and 565Nm. That’s the same power as the Huracán Evo, but less torque (the Evo makes 600Nm) because the STO ditches the heavier all-wheel drive system in favour of a rear-wheel drive layout; just like the GT3 and Super Trofeo.

Not that the lack of torque means the STO is slow, with Lamborghini claiming it can run 0-100km/h in just 3.0 seconds, 0-200km/h in only 9.0 seconds and will run to a top speed of 310km/h. Even in the wet we were seeing speeds above 265km/h down the Gardner Straight, so it feels race-car-fast.

But the speed is only half the story of this engine because the noise the V10 makes it almost worth the asking price on its own. Fans of high-performance, naturally-aspirated engines know their days are numbered (Lamborghini has even confirmed the Huracán’s replacement will be a hybrid) so they need to enjoy them while they can.

This engine truly sounds epic, with a fantastically evocative scream when revved hard. Standing in the pits with your eyes closed you’d just assume it was a thoroughbred racing car on track. In fact, it sounds better than many modern racers. It was challenging to fully experience the capabilities of the Huracán STO because of the wet conditions at Phillip Island. Thankfully there’s a new ‘ANIMA’ driving mode system with three unique modes – STO, Trofeo and Pioggia.

The latter is specifically designed for wet weather so it was ideal for our Phillip Island test drive. It adjusts the traction control, torque vectoring, rear-wheel steering and ABS settings to ensure the best driving experience in slippery conditions.

Crucially though, that doesn’t mean it dumbs down the car and cuts the power and response, which is what so many wet weather modes like this typically do. Instead, there’s still a very responsive throttle, the power is still accessible and the driver is still able to extract the most from the car that they can.

However, there is a safety net there to catch you if things get too slippery or out of hand, but the Pioggia mode does allow for some slip angle before it steps in – as we found out seemingly at every corner at Phillip Island.

The STO were fitted with Bridgestone Potenza tyres designed primarily for track use – but a dry track not the wet and slick Phillip Island we were faced with. That meant even in Pioggia mode and even using a higher gear or short-shifting the STO was breaking traction at most corners regardless of how gentle you were on the throttle.

Despite this you could still feel the potential of the car and when the rain stopped and the wind began drying the track for our final run we were able to experience the STO closer to its limit – and wow. It has fantastically direct and responsive steering, hugely powerful braking performance and the combination of huge tyres and high-downforce bodykit makes it incredibly stable through the Island’s fastest, most intimidating corners. 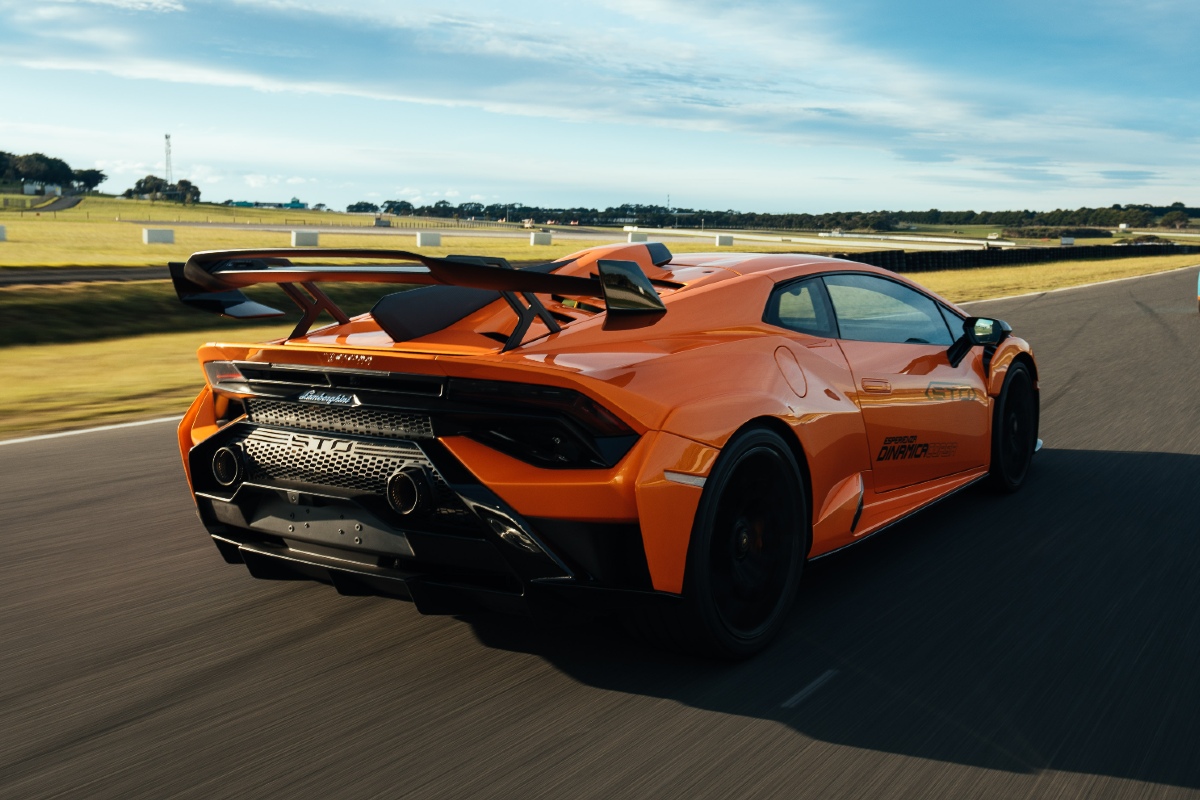 Even in the tricky conditions we experienced, the Huracán STO demonstrated immense ability and marked itself out as something special.

For the lucky few who can afford the $596,000 (plus on-road costs) asking price for the Huracán STO, they will be rewarded with a car few can rival in terms of driving appeal. There are faster track cars and more powerful road cars, but few supercars have the same evocative appeal of the Lamborghini.