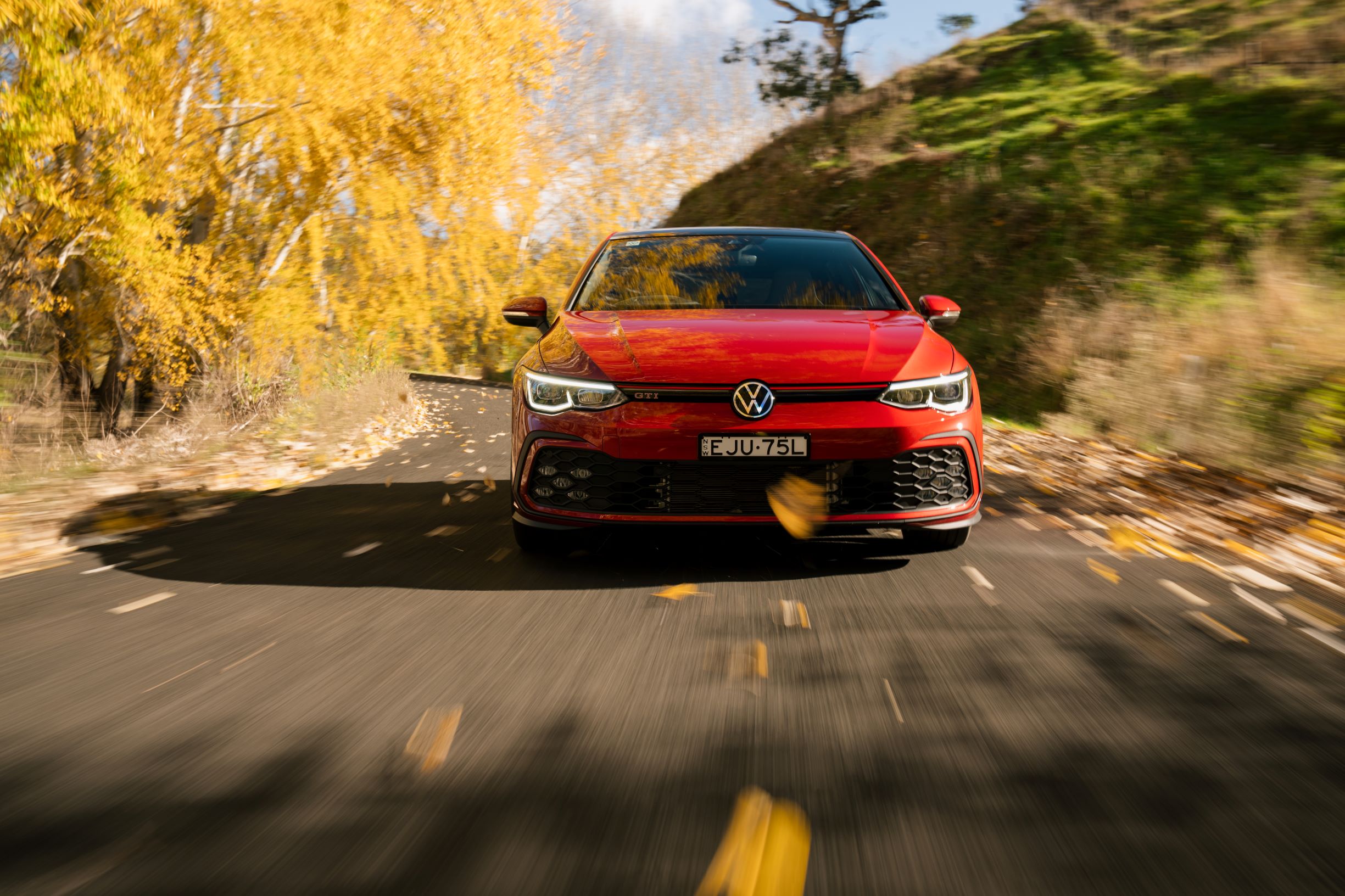 The eighth generation of what is arguably the origin of the hot hatch species as we know it today. Yes, the Mini Cooper came before it, but Volkswagen invented the modern hot hatch in 1976 when it launched the first Golf GTI – a small hatchback with a punchy engine.

Since then it has stayed true to its roots – small car, big engine – but the Golf has evolved into a far more modern and advanced small car. This latest GTI still has a powerful engine, but the focus has been on improving drivability and handling. Volkswagen gave us a chance to sample the new GTI at Luddenham Raceway on the edge of Sydney. For those unfamiliar, Luddenham is a short but busy track, with a variety of corners (slow, fast, off-camber, etc) and good elevation changes. It’s an ideal venue to test out the company’s claims that the new model has improved its handling.

READ MORE: What you need to know about the new VW Golf GTI

Like the rest of the Golf Mk8 range the cabin is a massive step forward thanks to what VW calls its ‘Innovision Cockpit’ – a pair of large, integrated screens for the instrument panel and infotainment systems. This new infotainment panel also introduces a new interface so the entire set-up looks and feels like a major upgrade from the previous model. 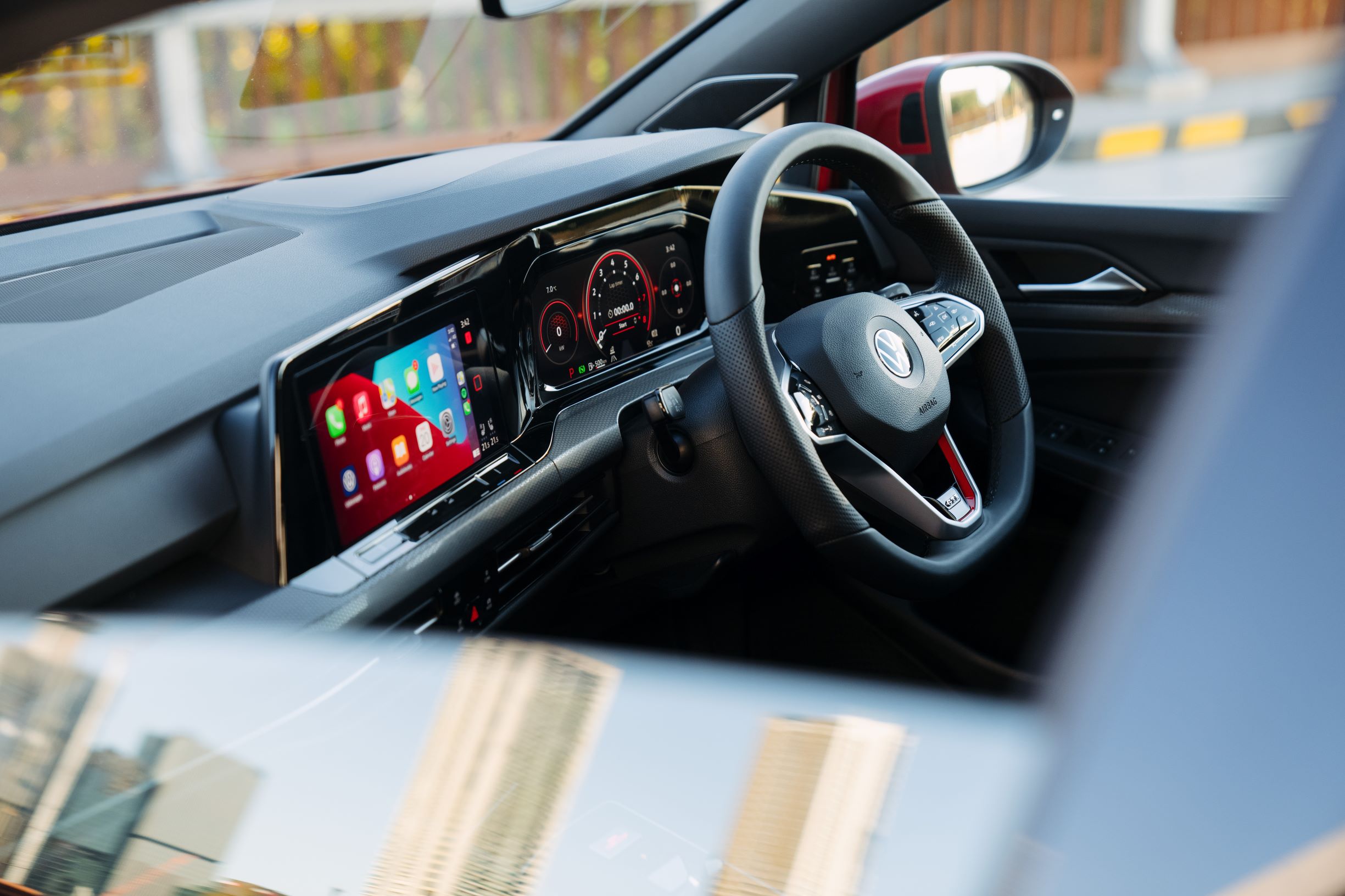 There’s new switchgear, with soft-touch, sliding buttons to control various aspects of the car including the climate control, stereo volume and, most importantly for the track, the Drive Mode selector.

The GTI also gets unique seats compared to the rest of the Golf range, the sport chairs offer good support and are comfortable, and naturally they’re trimmed in the GTI’s trademark tartan fabric.

Despite the new-look exterior and interior, Volkswagen has opted to carryover the same engine from the last GTI for this new one. That means it’s still a 2.0-litre four-cylinder turbocharged petrol unit and it still makes 180kW of power and 370Nm of torque. In pure output terms that puts the GTI behind some of its key rivals, the Hyundai i30 N makes 206kW/392Nm while the Ford Focus ST punches out 206kW/420Nm. Even the three-cylinder Toyota GR Yaris makes 200kW/370Nm. 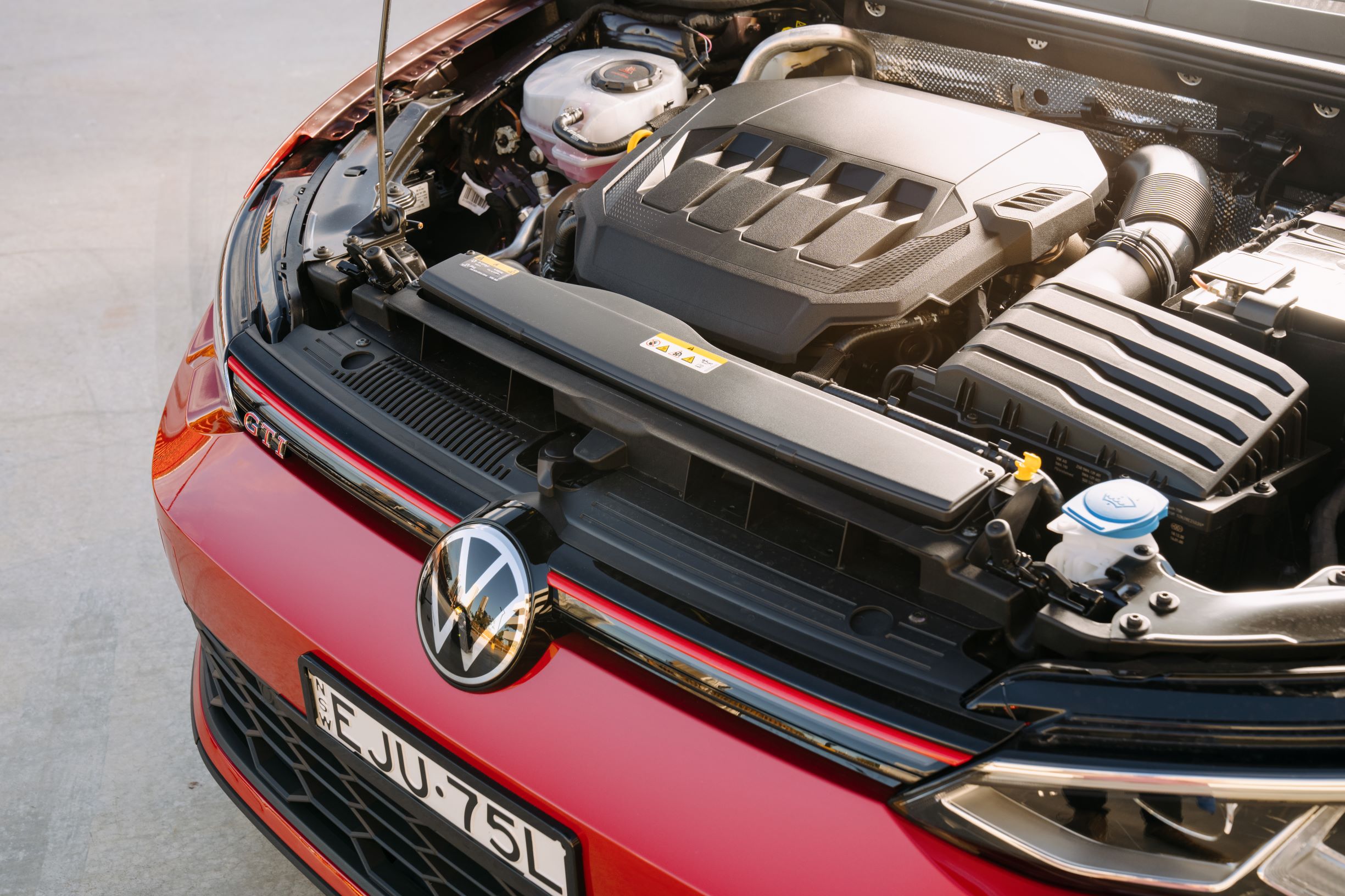 But power isn’t everything in a hot hatch. Not to sound like an apologist for Volkswagen but in this reviewer’s opinion some hot hatches have become so powerful it makes them harder and harder to enjoy on the road. The best hot hatches of all-time have struck a balance between outright performance and accessibility. Having more power isn’t helpful if it means you have to break every speed limit to enjoy the car.

So, while it’s fair to say the new GTI lacks the same pulling power as its rivals when you’re flat-out down the straight, it has plenty of punch out of corners and feels suitably quick for a car of its size.

The engine remains paired to a seven-speed dual-clutch automatic transmission, which is well-suited to the car. While the rest of the Golf Mk8 range has switched back to a more traditional torque converter automatic, the dual-clutch and its rapid-fire shifts help extract the best from the GTI engine.

It has been upgraded though, introducing a new shift-by-wire system that not only improves the way it changes cogs but also does way with a conventional gear-shifter and replaces it with a small toggle.

In Sport mode the response is good, but you can take full control by using the paddle-shifters. This means the DCT will hold gears for as long as you want, taking it all the way to the redline without interfering.

Having kept things the same under the bonnet, Volkswagen’s engineers got busy improving the handling dynamics of the new GTI. Arguably the biggest problem with the previous model (at least in my opinion) was it was loaded with too many gizmos and driver aids. Sure, they were impressive and arguably made the GTI a more efficient performance car, but it did suck the fun out of it to a large degree.

For this new model all the same gizmos have been retained, but they have been re-tuned and now fall under the new Vehicle Dynamics Manager. This combines and controls the functions of the XDL electronic differential lock and the Adaptive Chassis Control (aka the adjustable dampers), which helps improve the driving character of the GTI in Sport mode by feeling less intrusive than the old model.

It also helps that Volkswagen has introduced an ‘ESP Sport’ mode that gives more leeway for the car to slide and move around more at the limit, whilst still providing a safety net. Or if you prefer to play without any interference you can switch ESP off completely.

The GTI also comes standard with the brand’s Progressive Steering, which as the name implies, offers a progressive steering ratio as opposed to a conventional fixed one.

While all of this sounds like a lot of techno gizmos – and it is – the end result in the tuning of these various systems is the latest generation GTI manages to simultaneously feel faster and more responsive when cornering, as well as more playful and engaging. It has a higher ‘fun factor’ than the old model, especially when you turn ESP Sport on and dial up the dynamic settings. You can really cut loose, sliding the back end into corners, turn-in with more precision and power out of bends harder and feel like you’re more in control than the previous GTI allowed; even if the Vehicle Dynamics Manager is still working away to help you.

The Golf GTI is the front-runner – at least for now. Volkswagen not only invented the hot hatch segment, but has had a commanding sales lead for quite some time. This new model has managed to rediscover some of the magic the previous model lost, whilst simultaneously bringing more refinement and technology to the cabin. 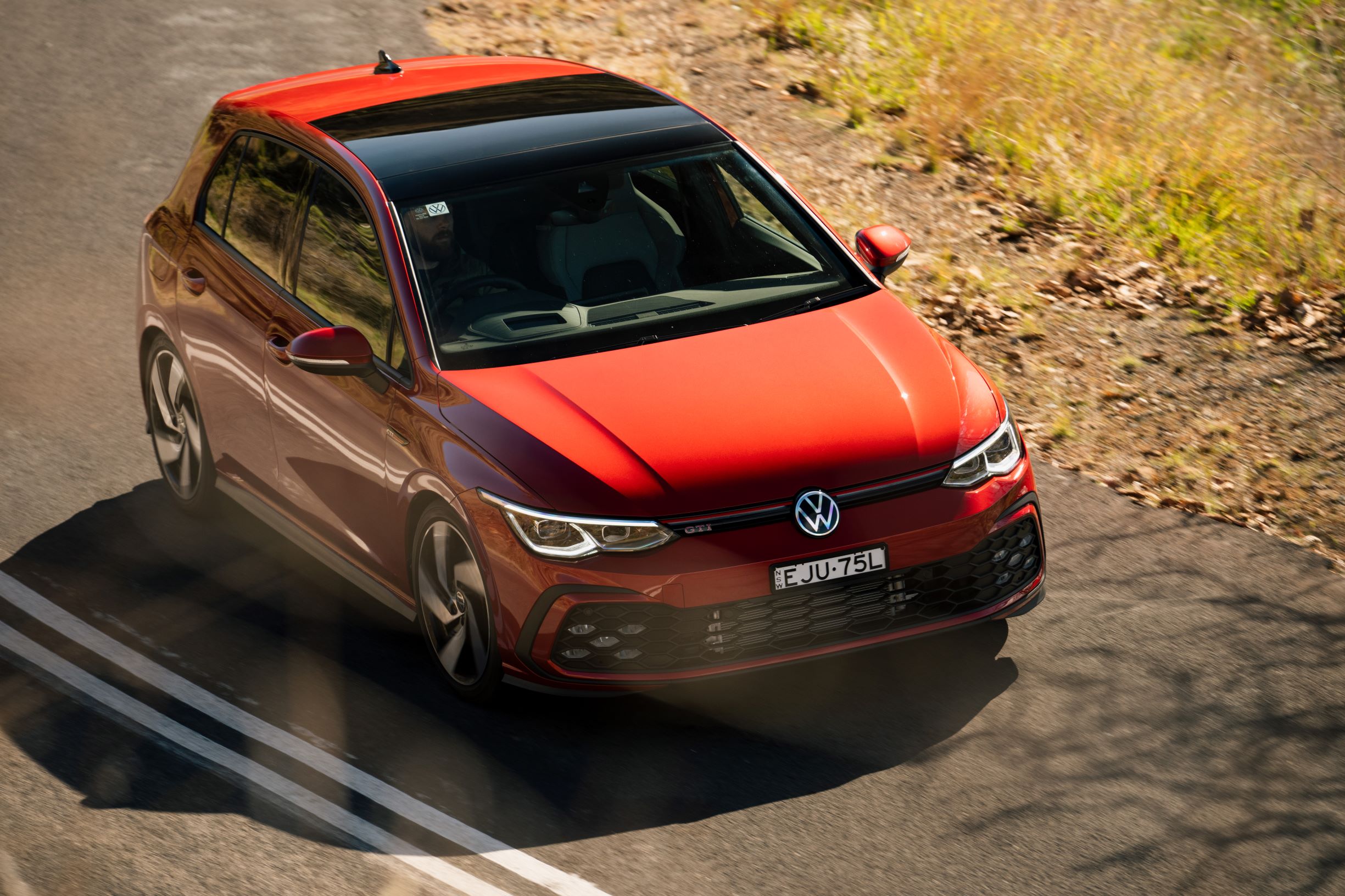 It doesn’t come cheap though, with the asking price now starting at $53,100 (plus on-road costs) that pushes it into the kind of money the brand has been asking for the all-wheel drive Golf R. It also makes it more expensive than its key rivals, especially the Hyundai i30 N which is about to launch with a DCT variant of its own.

That will push the Golf under pressure like never before, but the improvements made to this new GTI means it should be a thrilling duel between the veteran and the young upstart.