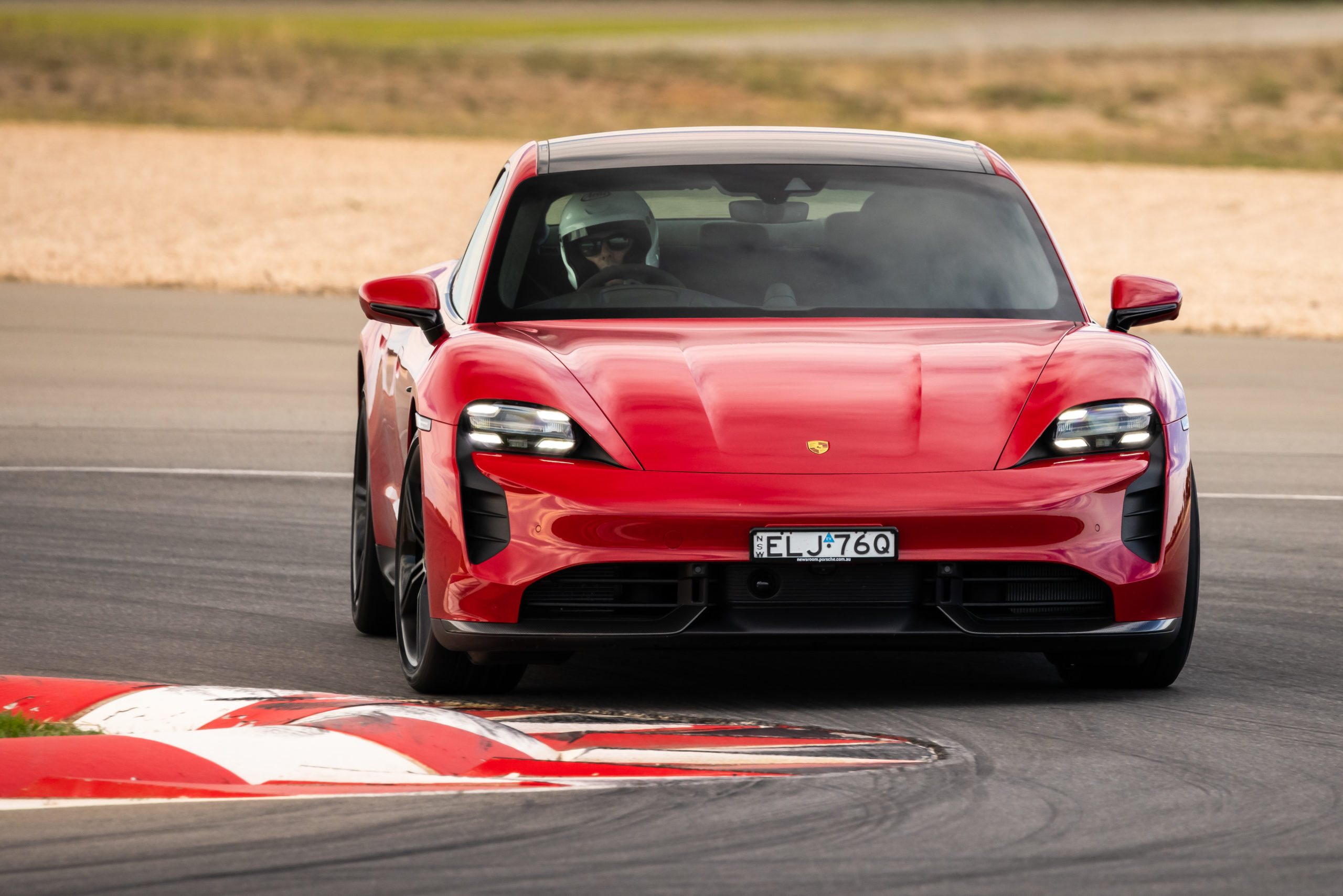 Porsche much-hyped new electric car. This is a bold step into the future for the German brand, perhaps its boldest and most important move since the launch of the Cayenne SUV way back in 2002. 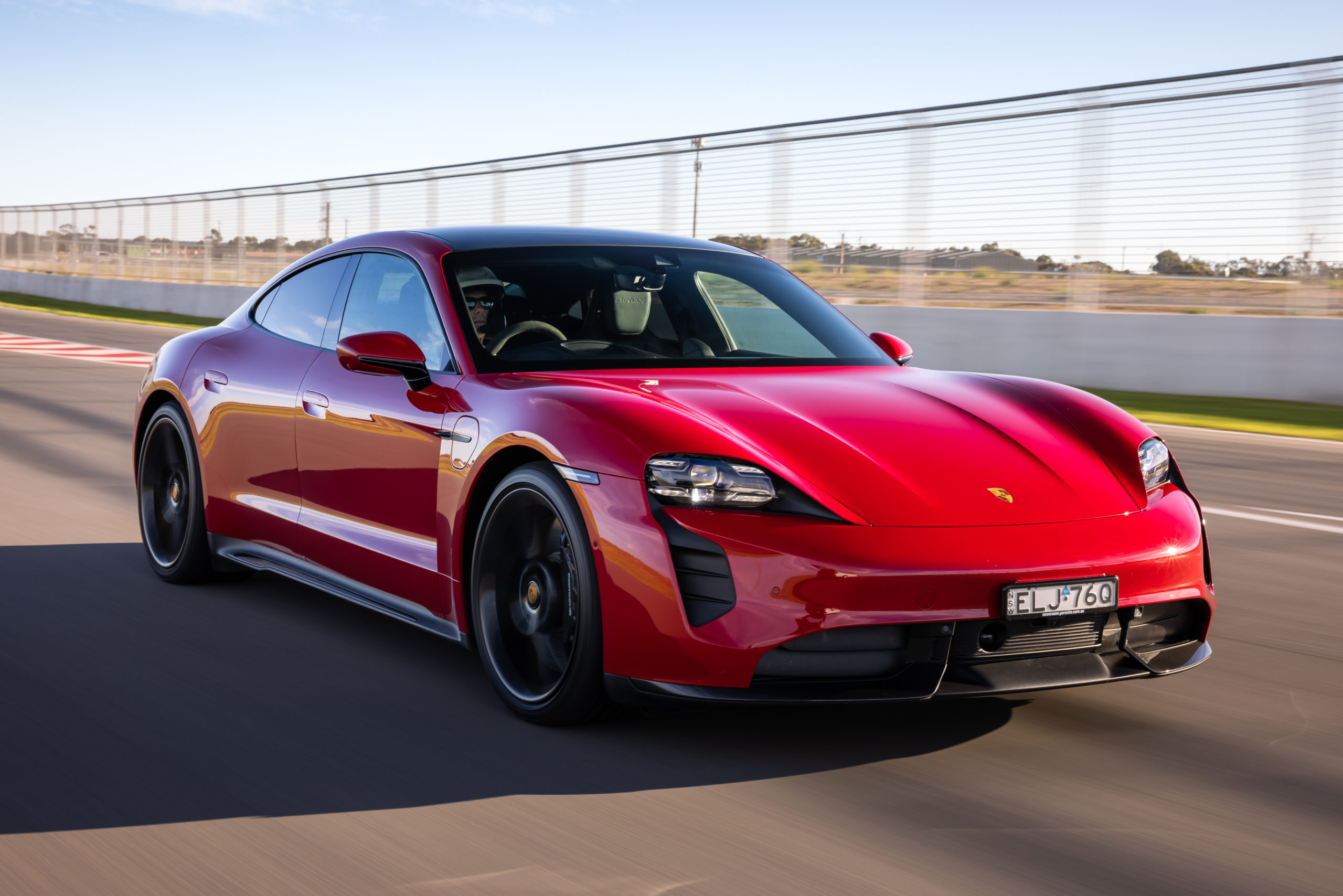 An EV is a major departure for Porsche, a company famous for its petrol engines, particularly its iconic flat-six, but with much of the industry headed down the electric road (driven in large part by emission regulations in Europe) Porsche couldn’t ignore EVs. That doesn’t mean Porsche is sacrificing performance, on the contrary the Taycan – especially in Turbo and Turbo S guises – packs the kind of punch we expect from the Stuttgart car maker.

Porsche Australia took the opportunity to allow journalists to sample the Taycan on the track at the recent 911 Turbo launch at The Bend. While modern EVs have earned a reputation for excellent performance, specifically acceleration thanks to the almost-instant torque electric motors provide, none yet have really felt track-capable. Porsche wanted to show that was no longer the case, and we were more than happy to see how it handled itself when unleashed in a safe environment. 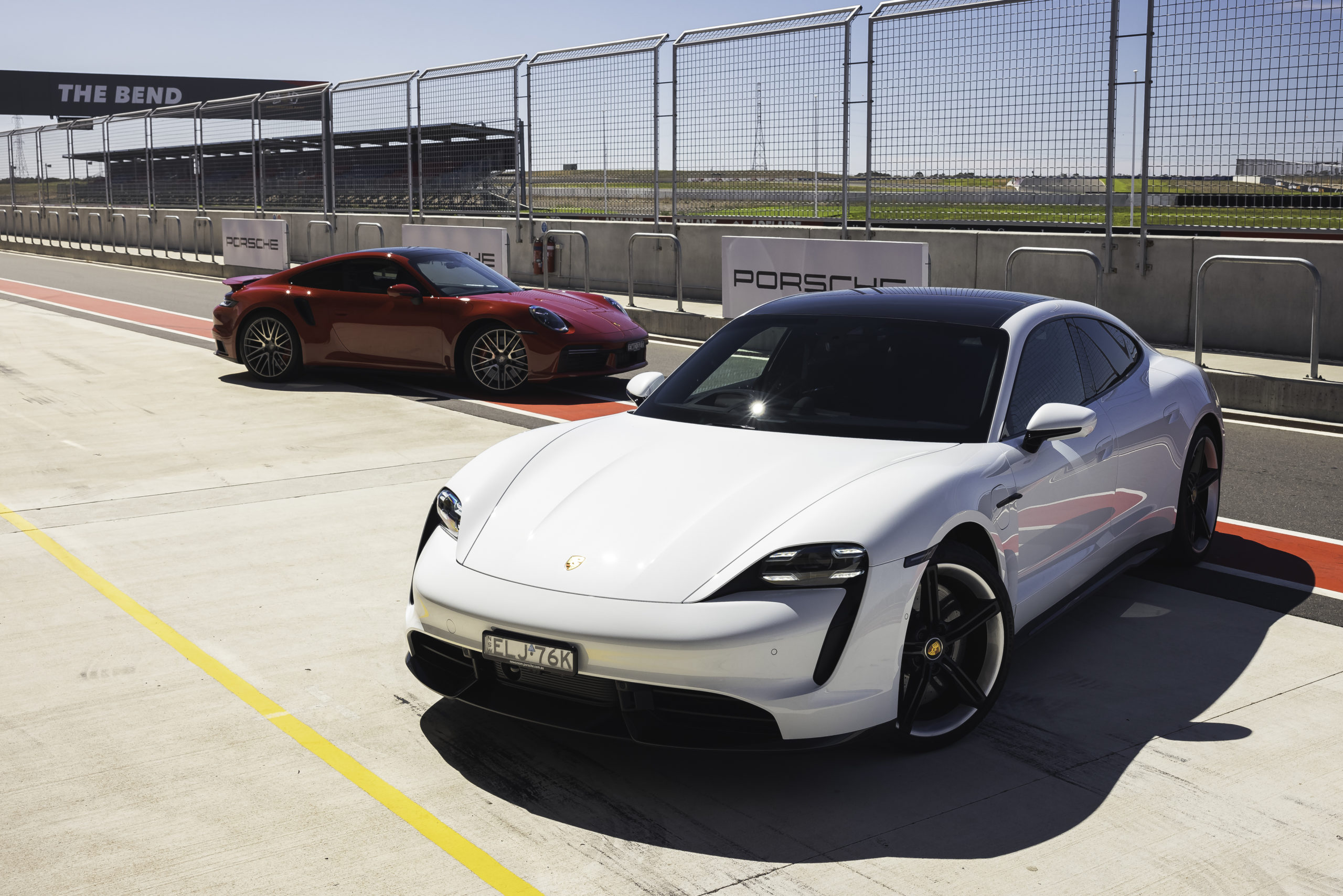 Plus, the fact remains, despite its powertrain the Taycan is a sports sedan at its core and that means it needs to go toe-to-toe with the likes of the BMW M5 and Mercedes-AMG E63 both on the road and the track if it’s to be judged fairly.

As we wrote when we tested the Taycan Turbo on the road, the cabin is stunning, a fantastic blend on tradition and technology. There’s plenty of digital screens to take care of pretty much every function – from the instrument panel, air-conditioning and infotainment – but there’s also classic Porsche touches, like the thick-rimmed steering wheel.

The key for this test are seats, excellent sports chairs that offer the lateral support you need when taking a car on the track. 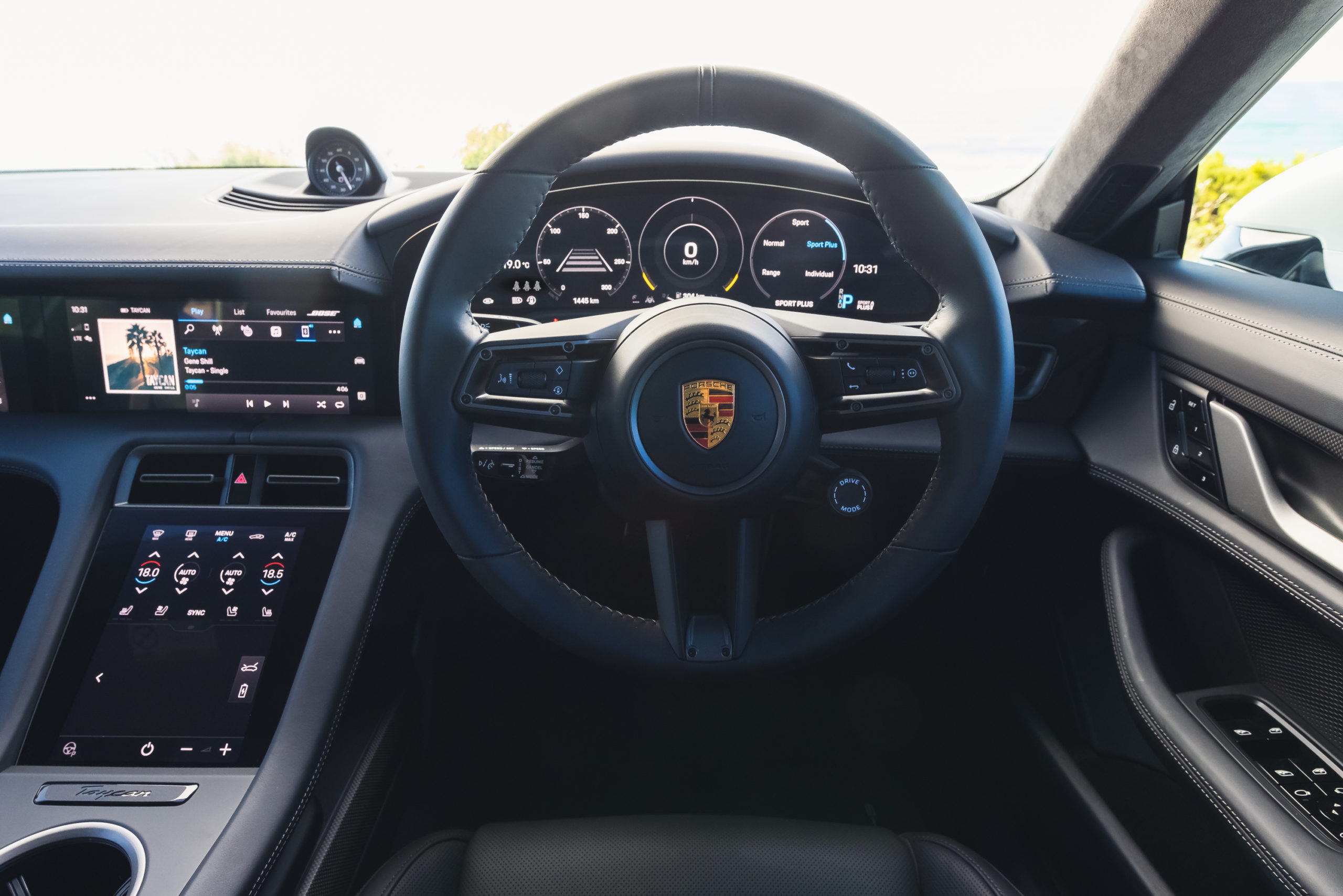 Tesla can rightly claim credit for popularising the concept of a high-performance, luxury EV, because before the Model S arrived, EVs were generally considered golf-carts-on-steroids. Given Porsche’s history and experience, it’s no shock (pardon the pun) that the Taycan takes that idea of a luxury sports sedan and elevates it to the next level.

The stats of the Taycan Turbo S are hugely impressive, the electric motors pack a punch with 560kW of power and a staggering 1050Nm of torque. Even though it weighs more than 2000kg the acceleration of the Taycan is nothing less than ferocious. 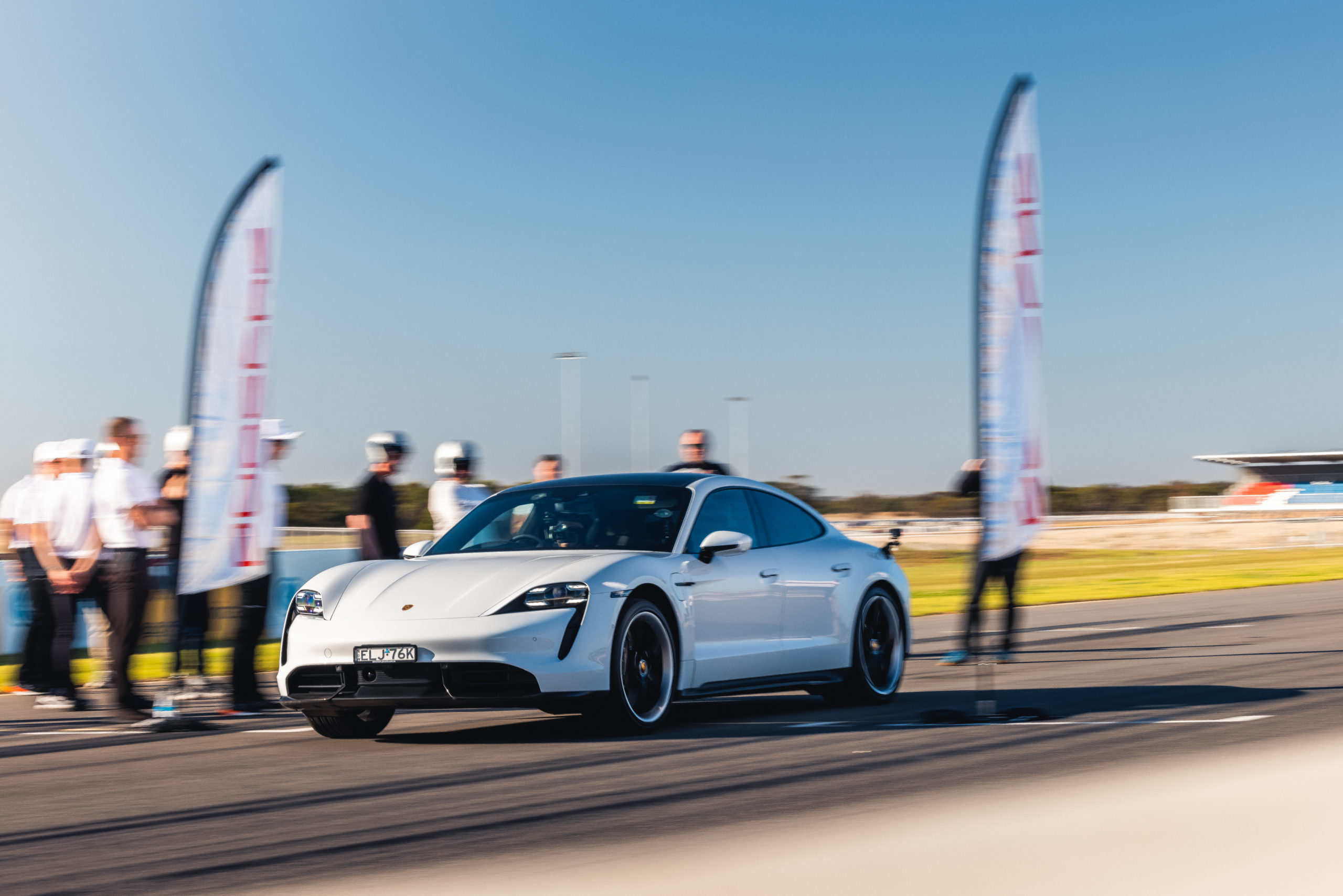 Porsche has earned a reputation for reported acceleration times that are both achievable and repeatable, and just because the Taycan has gone electric, that hasn’t changed anything. Not that it wasn’t a challenge, reportedly the engineers had to work especially hard to ensure the correct thermal management to make sure the Taycan could do the claimed times on a consistent basis.

Did they succeed? Well, the official claimed 0-100km/h time is a mighty 2.8 seconds, a very, very rapid time for any car, let alone a four-door sedan. Porsche allowed us to repeatedly test the claim using the car’s launch control and we couldn’t match that 2.8 seconds claim – we beat it. Our first launch was 2.54 seconds and our second 2.55 seconds, which highlights both that Porsche’s claim is conservative and that it has achieved its goal of making it repeatable. 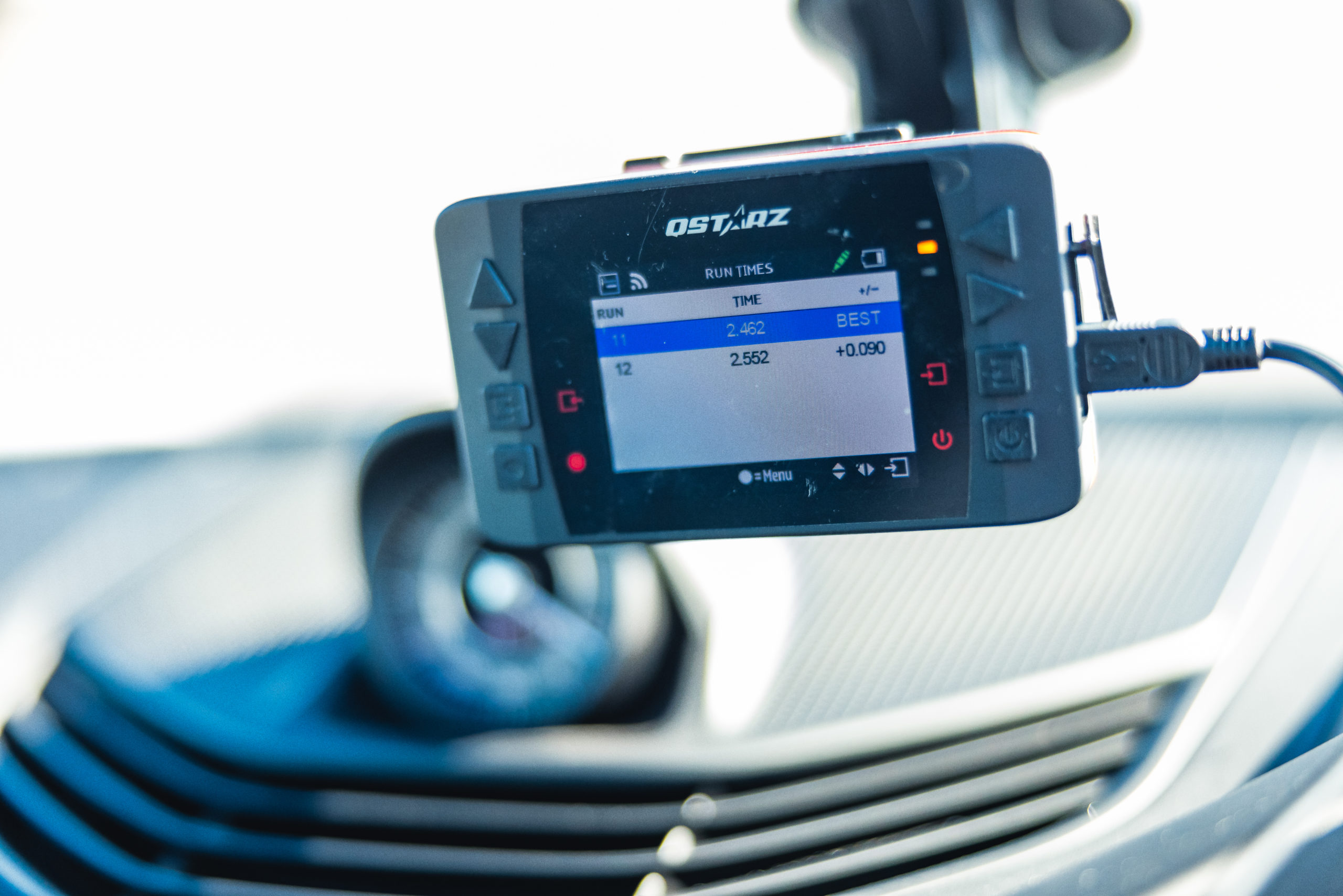 The Porsche Taycan Turbo S acceleration is rapid and repeatable

Not only that, but Torquecafe wasn’t the only media present. So that 2.55 seconds run was actually the Taycan’s 13th full-speed launch, and no-one reported a time slower than 2.8 seconds. In fact,

In short, the acceleration of the Taycan Turbo S is so quick and repeatable that you may find yourself feeling mildly sick due to the violence of each launch.

As for the performance down the straight when he started doing hot laps, the Turbo S isn’t just quick off the mark. It kept pulling all the way down the long front straight at The Bend, easily blasting past 250km/h.

The truth is, the acceleration was always going to be impressive, that’s something it shares in common with plenty of EVs. The real test was how it held itself in the corners, because EVs are heavy thanks to the huge battery packs – and weight is typically the enemy of handling. 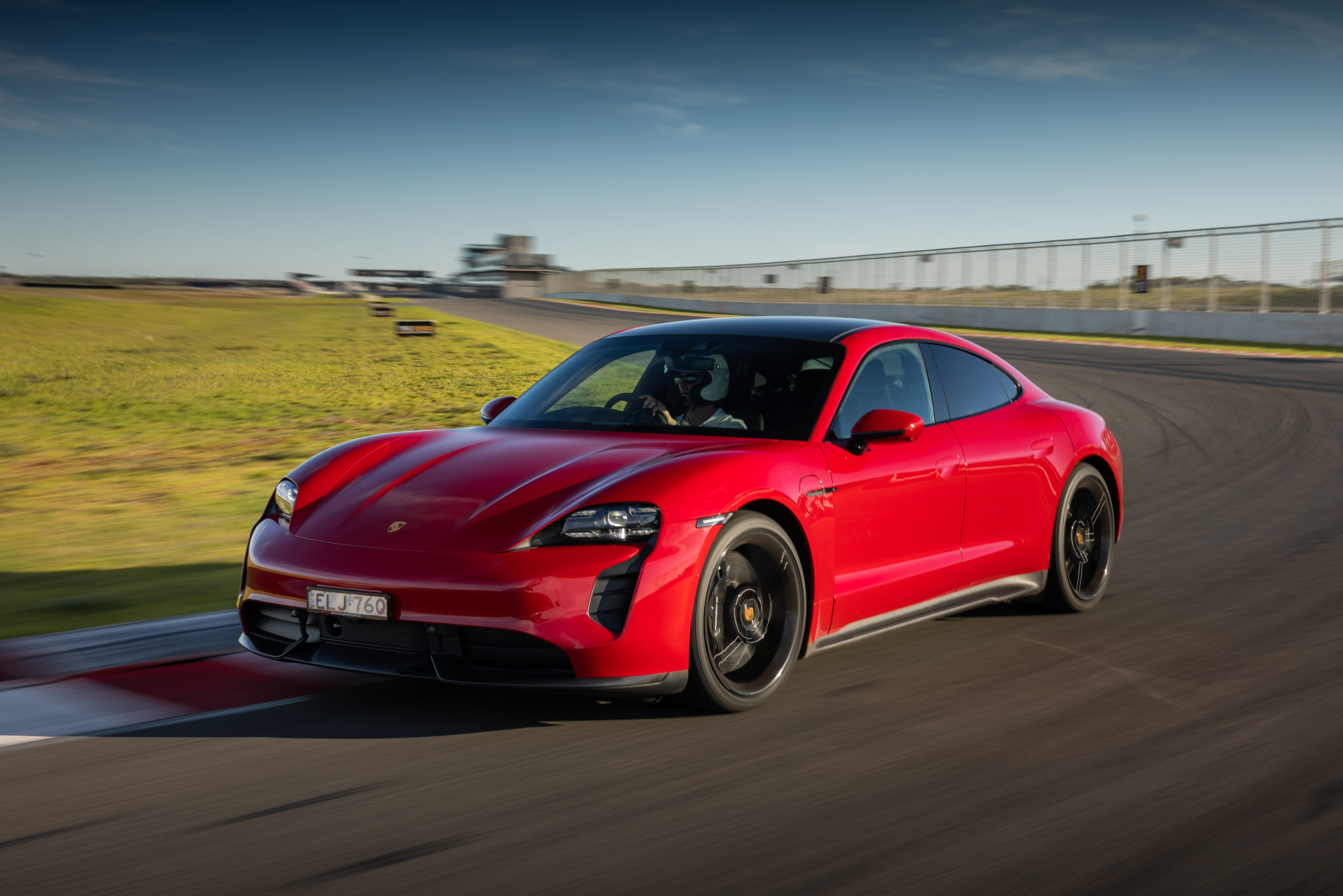 Porsche wouldn’t let a trivial matter like physics get in its way.

Obviously you can feel the weight when cornering, but it doesn’t feel lumbering or slow, instead the directness and feedback of the steering allows you to place the Taycan with precision. It has the trademark Porsche feel on the track, cornering with a purposefulness that makes it engaging to drive.

As we discovered when we tested the Taycan Turbo on the road, another era of attention for Porsche’s engineers was the braking. They aimed to ensure a more genuine pedal feel, rather than the artificial action that often comes with regenerative brakes on EVs. You can choose to have regen or not, and we experimented to see the difference, and it was noticeable. At the end of the straight, at the hard stop into turn one, the Turbo S pulled up almost 50m quicker with regen active – while still providing good pedal feel.

While obviously not a track car in the sense of a 911 or 718, the Taycan certainly earns its Porsche badge for being an above-average machine on a circuit. While the acceleration is amazing, what really impresses is how well it acquitted itself around the more challenging corners at The Bend. 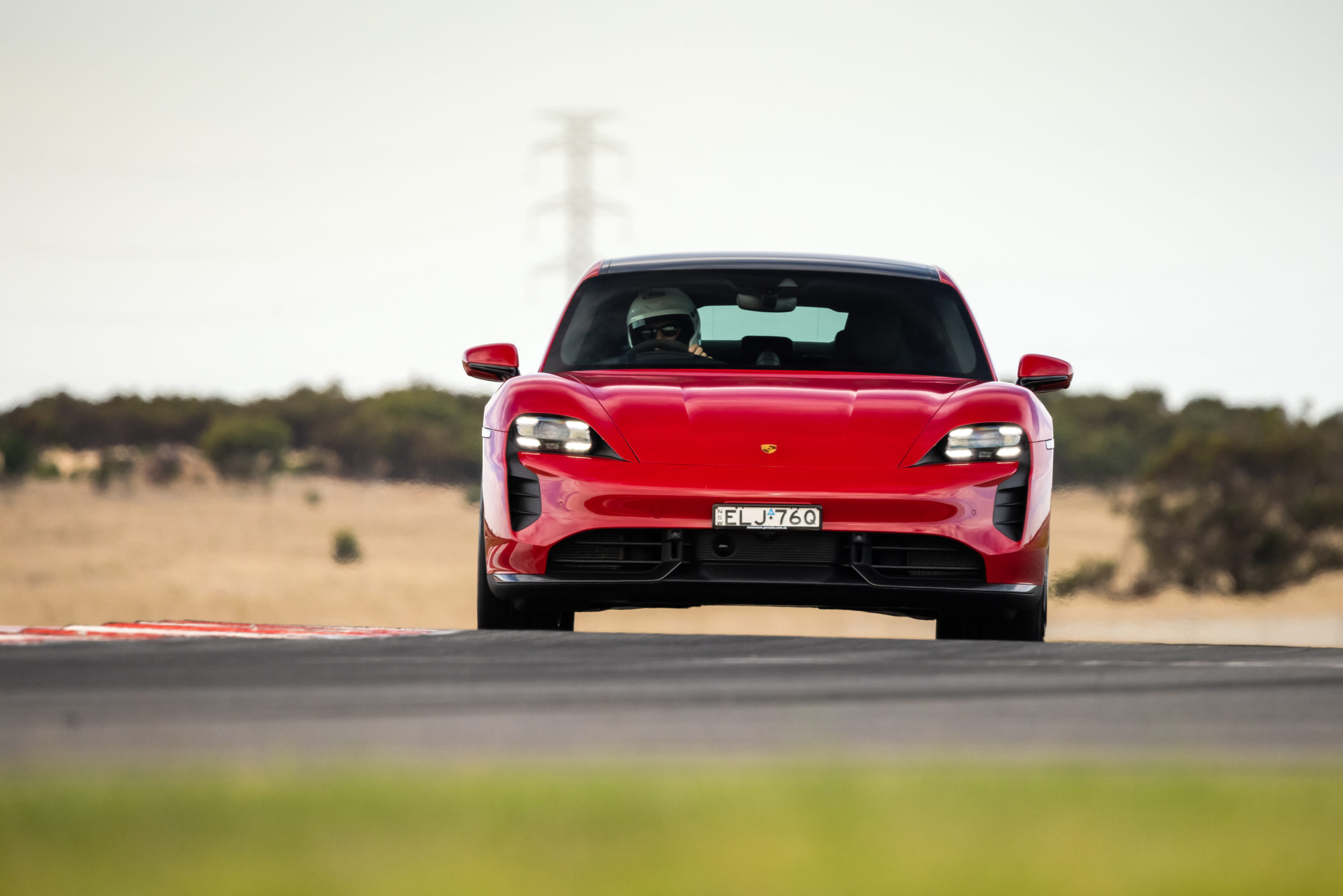 Another impressive aspect of the Taycan on track was the battery use. The Turbo S has a long range for an EV, a claimed 405km, but it’s especially good when you consider the performance. You’d think that high-speed lapping would suck in dry in no time, but remarkably Porsche needed to refuel the 911 Turbo before the Taycan needed to visit the powerpoint.

Against conventional sports sedans, like the M5 and E63, the Taycan would have no trouble going head-to-head on a track.