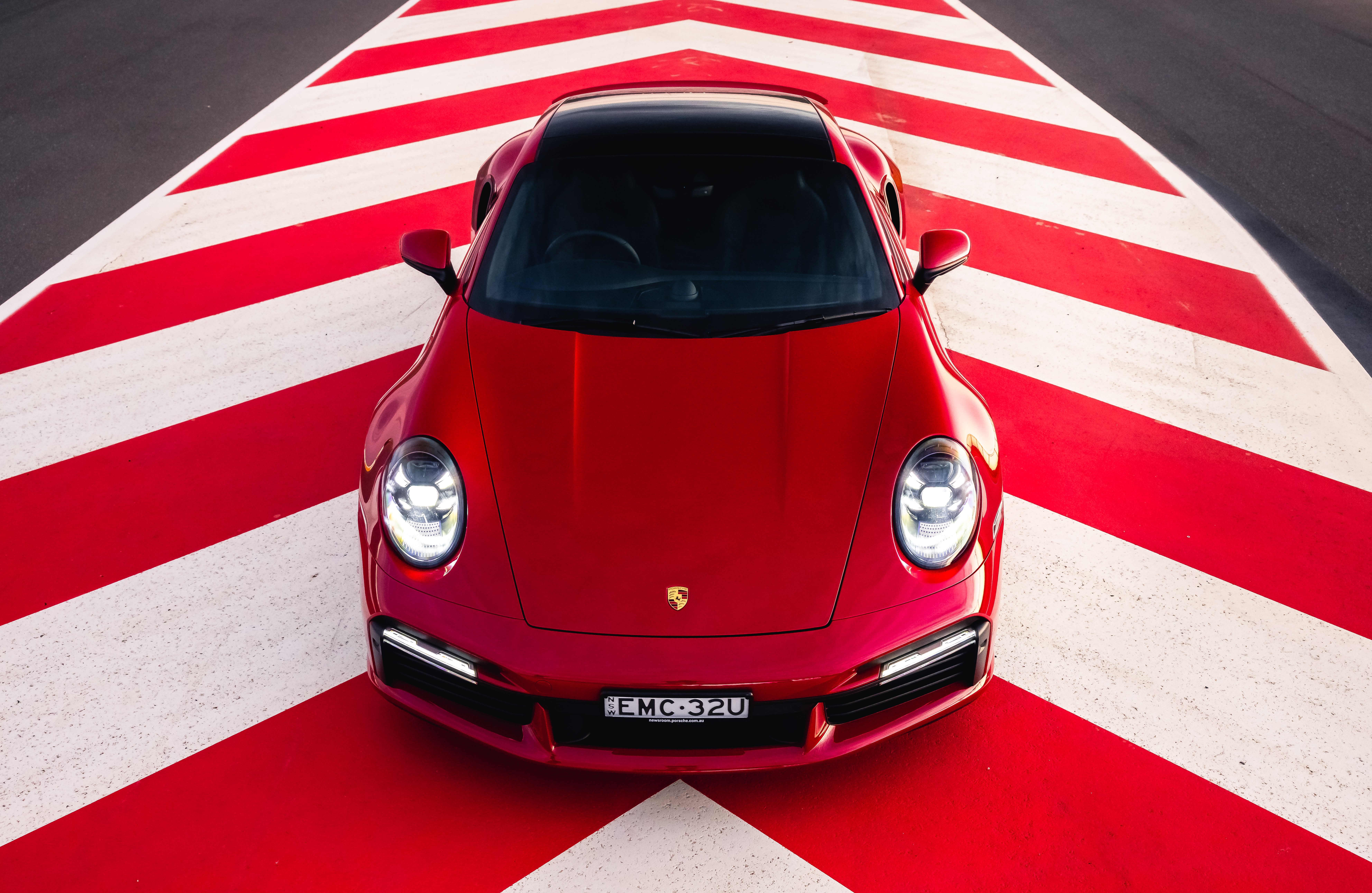 The newest member of the Porsche 911 family and the second-most potent variant released so far. The modern need for downsized, turbocharged engines across the regular 911 range has made the line-up slightly more confusing, but there should be no confusion about how serious the 911 Turbo is about performance.

While the 911 Carrera and Carrera S use a turbocharged engine, it only measures 3.0-litres. In contrast, the 911 Turbo gets a bigger 3.8-litre twin-turbo flat-six that pumps out a lot more power. It also comes standard with all-wheel drive, for superior traction and help tame all the power it offers. Because it’s a Porsche. All Porsches are track-capable even the Cayenne and Macan SUVs don’t disgrace themselves on a track.

But the 911 Turbo not only feels at home on the circuit but needs a closed course to fully appreciate the breadth of its capabilities. It’s simply too fast to drive anywhere near its limit on the public road.

Another defining element of the 911 Turbo is its luxurious and well-appointed cabin that helps separate it from the more spartan and purposeful interiors of the track-focused GT3 and (eventual) GT2 models. For starters, getting in is just as easy as any 911. Yes, it’s a low-slung sports car, but once you carefully drop yourself inside you’re embraced by a comfortable, leather-trimmed sports seat. You grip a leather-wrapped steering wheel with all the key controls easily falling to hand. There’s a pair of stubby gear selector in the in centre console for the eight-speed dual-clutch transmission, and small metal paddle-shifters behind the wheel to swap cogs in manual mode on the track.

There’s also a cupholder in the centre console if you need that too.

So with ‘only’ 427kW/750Nm and all-wheel drive the Turbo has no trouble launching from 0-100km/h in a neck-snapping 2.8 seconds; and it’s a Porsche so that claimed number is believable, achievable and repeatable. Porsche also claims a top speed of 320km/h and while we ran out of straight away at The Bend, it certainly didn’t feel like it was running out of steam as we hit 250km/h on the run to the first corner. On the track what you really notice though, is the way it punches out of corners. With so much great and all-wheel drive traction, you only need to get the car partially straight and you can squeeze on the throttle and fire out of the corner like you’ve been launched from an aircraft carrier.

It builds speed so quickly that you really need your wits about you on the track because the distance between the corners feels shorter than when you’re in a less potent car.

The beauty of the 911 Turbo (and why it costs so much money) is its breadth of capability, feeling equally at home blasting down a highway (or autobahn), gliding along a country back road or carving up a racetrack.

While we’ve experienced the first two in previous generations, our test of the new model is limited to the track – and we’re not complaining. The 911 Turbo felt perfectly at home on The Bend, taking whatever challenge we threw at it with ease. 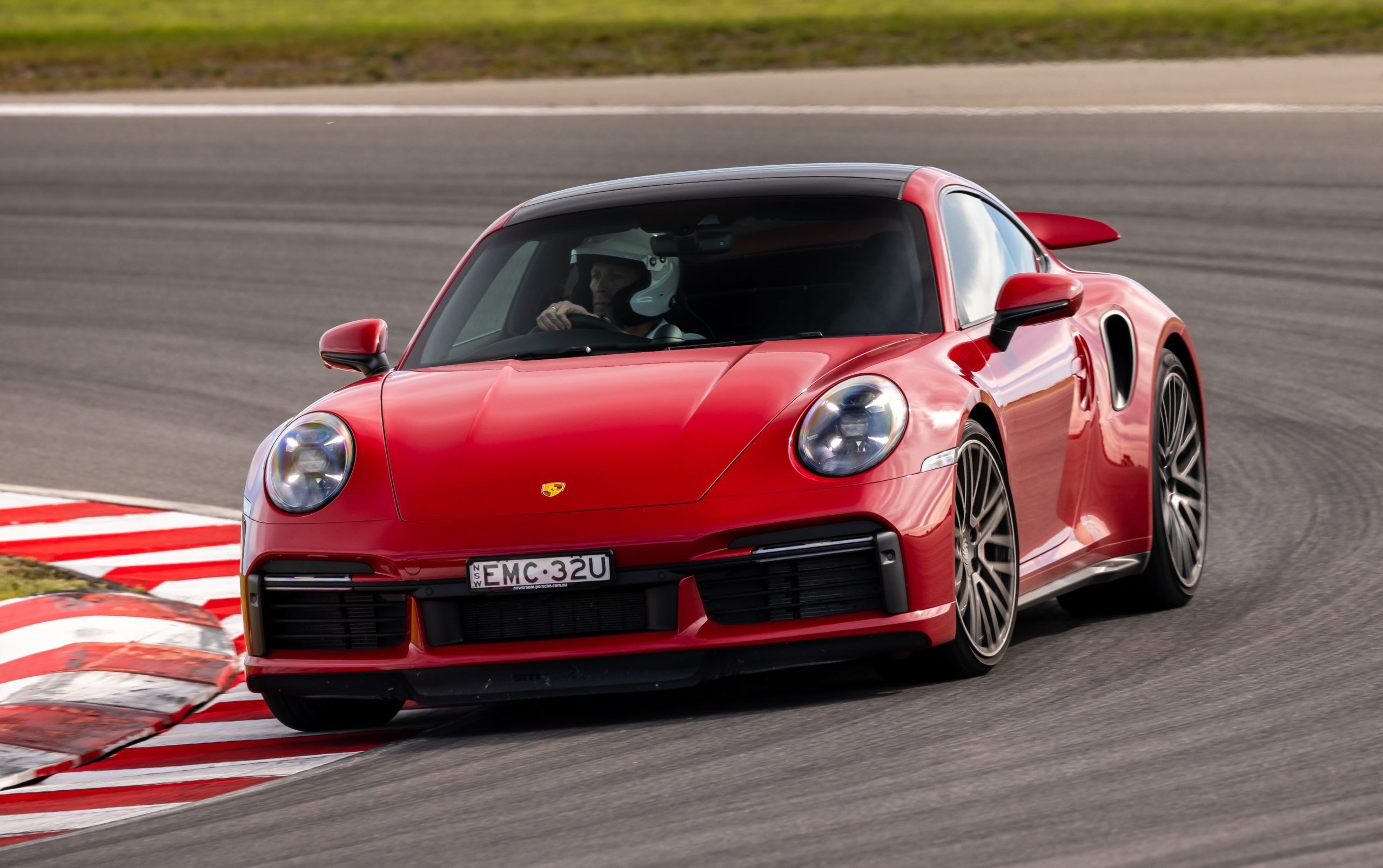 The first sequence of corners at The Bend is a great test of a car, you need to brake hard at the end of the straight for the almost 90-degree right-hander, before quickly changing direction to take the open left-hand turn two and then diving back to the apex for the right-hand turn three.

For starters, the brake into the first corner gives you a chance to marvel at the stopping power of the 480mm front rotors that are clamped by six-piston calipers. Even from more than 250km/h the 911 Turbo pulls up rapidly and gives you confidence every lap that it will do the same; although we personally didn’t do any long runs, the two examples we tested spent most of the day running laps at speed with no reports of brake fade.

Turning into the first corner highlights the directness of the steering, while the quick changes of direction into T2 and T3 show off just how responsive the chassis is. Tucking the nose into the apex at T3 and then launching it out onto the straight-ish run to T4 was a thrill every time.

Interestingly Australian deliveries of the 911 Turbo come with either Pirelli P Zero or Goodyear Eagle F1 tyres. The former is the clear preference if you like a grippier, more stable tyre. The Goodyears, by contrast, tend to slide around more on track, but not in an uncomfortable way as the chassis is so well balanced it allows you to feel in control at all times. In a verdict that will come as no surprise to anyone who understands performance cars, the Porsche 911 Turbo is a brilliant car on track. The combination of a powerhouse engine and finely-honed chassis make this latest addition to the 911 family a front-runner for anyone looking for a supercar that’s as easy to drive on the track as it is to the local shops.