The newest and most extreme iteration yet of Porsche’s iconic 911 GT3.

Now in its seventh generation, having begun with the 996 model in 1999, the GT3 has become a legend in its own time. The GT3 is designed with two guiding principles – firstly, to be the ultimate driver’s Porsche, and secondly to tie together what the company does on the racetrack and what it sells in the showroom.

Because it’s the closest thing you can buy to a Carrera Cup car with number plates.

A lot of car companies like to say their cars are ‘like a race car’ but only a select few road cars truly offer the kind visceral, borderline violent, experience that a racing machine does. The 911 GT3 is one of those few. 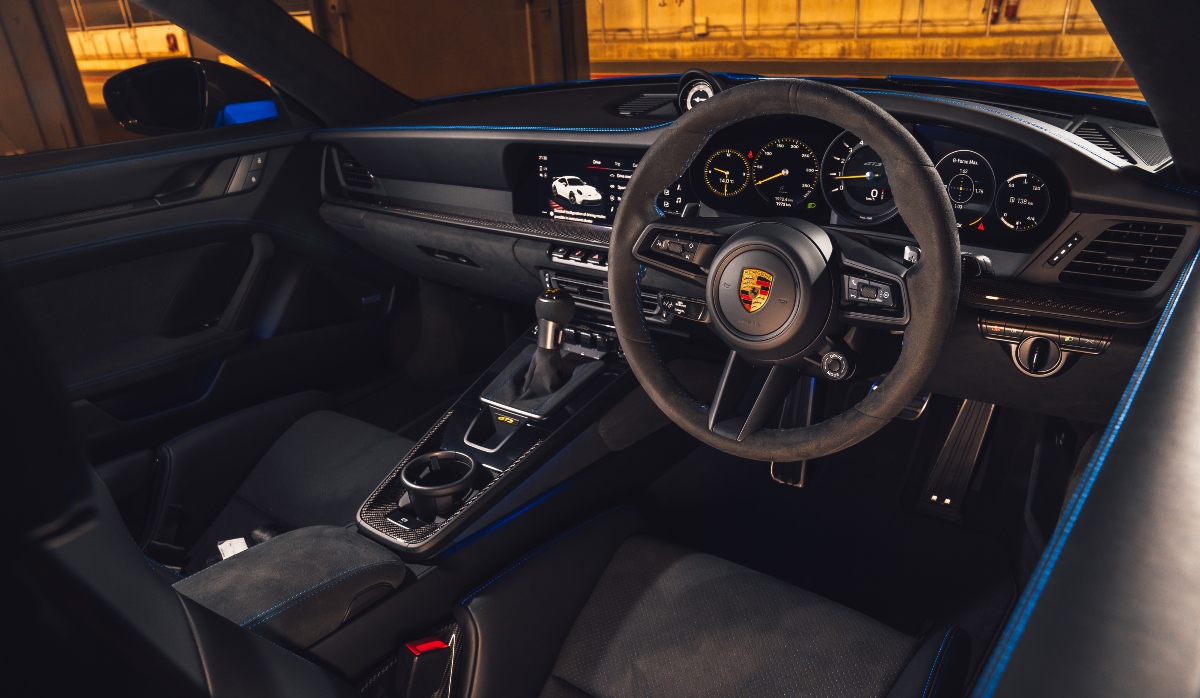 It features the same design we’ve become accustomed to with the latest 992 generation 911, but you can tell as soon as you slide inside that it means business. There’s a more purposeful intent to the GT3, with sports seats and a suede-wrapped steering wheel.

The cars we tested took things to the next level though, because they had the Clubsport package fitted, a no-cost option, which adds a half roll cage, a racing-spec six-point harness for the driver and a hand-held fire extinguisher.

Our test car also had the optional lightweight bucket seats installed, which are the same design as the 918 Spyder hypercar. These chairs are made from carbon fibre reinforced plastic (CFRP) so they weigh 12kg less than the sports seats, and they feature the correct holes for the racing harness.

The new wheel features Porsche’s drive mode dial for the first time, allowing you to switch between the GT3’s three driving modes – Normal, Sport and Track.

One of the notable features of the Track mode is it changes the dashboard display so only the most relevant data is shown on the two screens that flank the large, round tacho that sits in the centre. Specifically it shows the oil pressure, oil temperature, coolant temperature and the tyre pressures. Track mode also allows the tyre pressure monitoring system to distinguish between cold and warm tyres and adjust its warnings accordingly. Porsche’s decision to stick with the 4.0-litre naturally-aspirated flat-six engine is a pragmatic one, given the cost of developing an all-new, non-turbocharged, petrol engine at this stage of proceedings would be difficult to justify.

Thankfully, the engine remains one of the true modern mechanical marvels and Porsche has found a way to squeeze yet more power from it. It now makes 375kW at 8400rpm and 460Nm of torque at 6100rpm, but has the ability to rev all the way to 9000rpm.

It’s paired with the choice of a six-speed manual or seven-speed dual-clutch transmission (which is what was fitted to our test car).

On paper those figures don’t sound spectacular in this age of huge power and torque numbers, but on the track the GT3 feels brilliant – never lacking for grunt. Porsche claims it will run 0-100km/h in just 3.4 seconds, and it feels every millisecond that quick.

It may not have a big performance boost over the previous generation but it pulls hard all the way down SMP’s main straight. It feels equally punchy out of the corners too, launching you with such ferocity between the bends that it forces your brain to speed up.

What’s really overwhelming though, is the noise. This boxer engine is loud – very, very loud. At 9000rpm the engine is screaming through the exhaust at such a volume that even when wearing a helmet the sound is intense. Thankfully, it’s the sweet sound of Porsche’s iconic flat-six so the sheer volume of it is pleasing rather than painful. 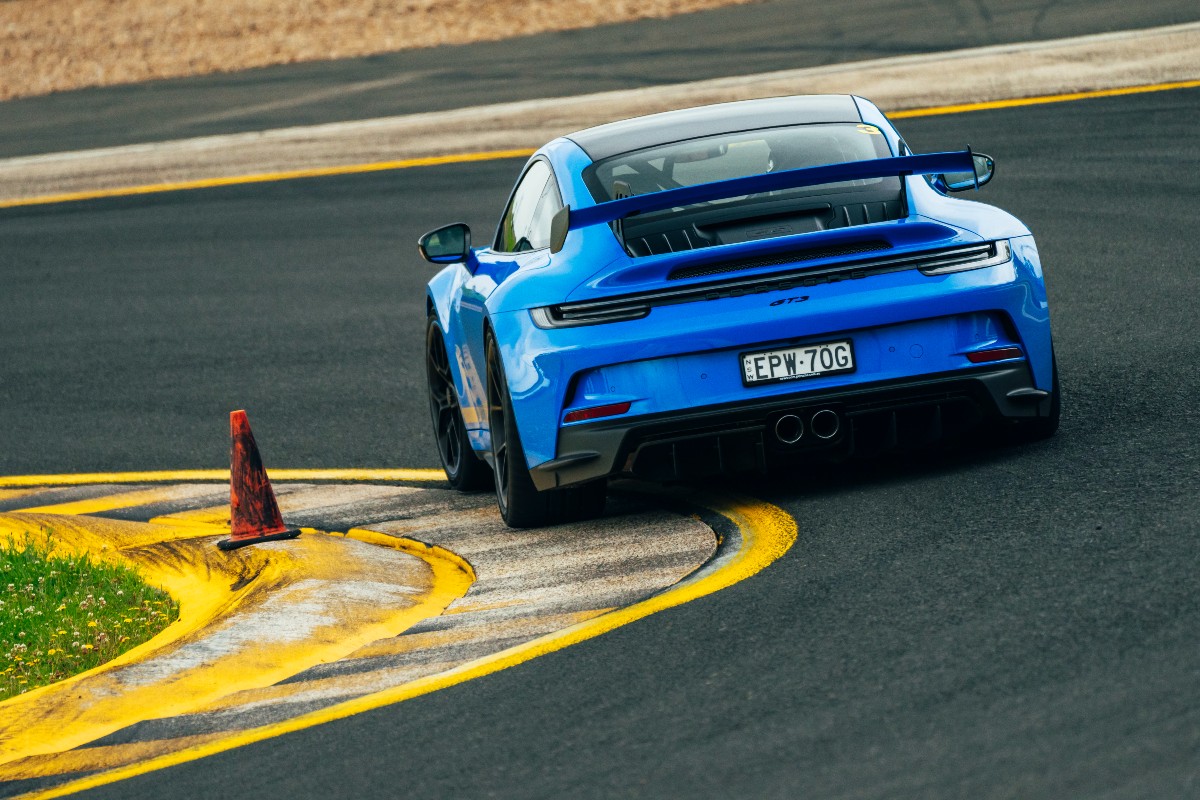 While the power is more-than-adequate, where Porsche’s engineers really focused on improving this new generation is the handling. It has pushed the production car closer to the race car than ever before thanks to some major changes.

While the wild-looking new aerodynamic package is one obvious change, another equally important one is under the front guards – double-wishbone suspension. This is a first for a road-legal Porsche but the set-up is very similar to what the company used on its 2017 Le Mans GTE-class winning 911 RSR; while also having connections back to the RS Spyder LMP2 prototype.

Porsche has made the switch to this new suspension layout because of its ability to provide a more stable handling platform when driving at speed on the track. The double-wishbone layout is able to reduce braking dive as well as lateral forces when cornering and it allows for a higher camber stiffness under high compression.

Then there’s the aero kit, and it may be one of the best combinations of function and form on the market today. Starting at the front there are intakes to channel air into the radiators and front brakes, while simultaneously increasing downforce on the front axle. The air is then expelled through the new two-part vent on the bonnet (which is made of carbon fibre).

There’s also a new wide lip spoiler at the front that works with the front diffuser to direct the air under the new fully clad underbody. This allows for a much cleaner flow of air over the large rear diffuser – thus improving downforce on the rear axle.

Helping that situation is the unmissable rear wing. In what is believed to be a first for a production car it uses a swan-neck mounting, again taking from the Le Mans-spec 911 RSR. Aside from looking impressive, this mounting allows air to pass more cleanly across the underside of the wing to create even more downforce.

That’s all interesting technical detail, but what does it really mean when you drive the new GT3? In short, it means it’s as good as any car I’ve ever driven on a racetrack – and probably the best.

It has immense grip from both ends, allowing you to carry huge amounts of speed right to the apex of the corner and then out to the exit.
The GT3 turns in with pinpoint precision, but has so much grip and front-end response that you can adjust it even at the limit. Porsche Australia’s chief driving instructor (and 2017 Bathurst 1000 winner) Luke Youlden demonstrated this when he took us for a hot lap. At times you could be forgiven for thinking Youlden over-drove into a corner but seemingly no matter how hard he leaned on the front end, the GT3 responded with more grip and would go wherever Youlden pointed it.

The way the car rotates is helped by Porsche’s rear-wheel steering (RWS) system. It works below 50km/h to help improve the turning circle and maneuverability of the GT3, but above 80km/h it steers the rear wheels in the same direction as the front (up to 2.0 degrees) to aid cornering stability.

While the system helps to turn the car, but to the unfamiliar it can feel at times like the back end is sliding around. Once you get accustomed to it though, you do notice it helping to tuck the back end into line.

Then there’s the brakes, which are bigger than before and offer immense stopping power. The front rotors now measure 408mm (up from 380mm), are internally vented and clamped by six-piston monobloc calipers. At the rear the discs are still 380mm.

Put simply, you can pound the brake pedal and the stopping power is deeply impressive. Even after multi-lap runs and limited breaks in between, the GT3 never felt anything less than strong and stable when you needed it to slow. It’s stating the obvious, but the 911 GT3 is definitely a front-runner. In fact, it may be the benchmark for road-legal track cars. Few others offer its combination of approachability and sheer performance potential.

Someone like myself, with some level of track experience, can enjoy the GT3 for what it is. But in the hands of an expert like Youlden, or anyone who regularly hits the track, this is a car that can continue to demand more for the driver.

Youlden summed it up best when he said during his new lap record at The Bend he began to refer to the same brake markers and turn-in points in the 911 GT3 as he would in a Supercar or Carrera Cup racer.