The other GT R. While the Nissan GT-R is unquestionably more famous, this German version has quickly made a name for itself as a seriously quick performance car. While not at the very top of the AMG GT range – that’s the Black Series – the GT R takes the ‘standard’ coupe and makes it faster and more track-focused.

Because it’s designed for the racetrack. While not a racing car the GT R has been designed for regular track use, in the same mould as the Porsche 911 GT3, Lamborghini Huracan STO and Ferrari 488 Pista. 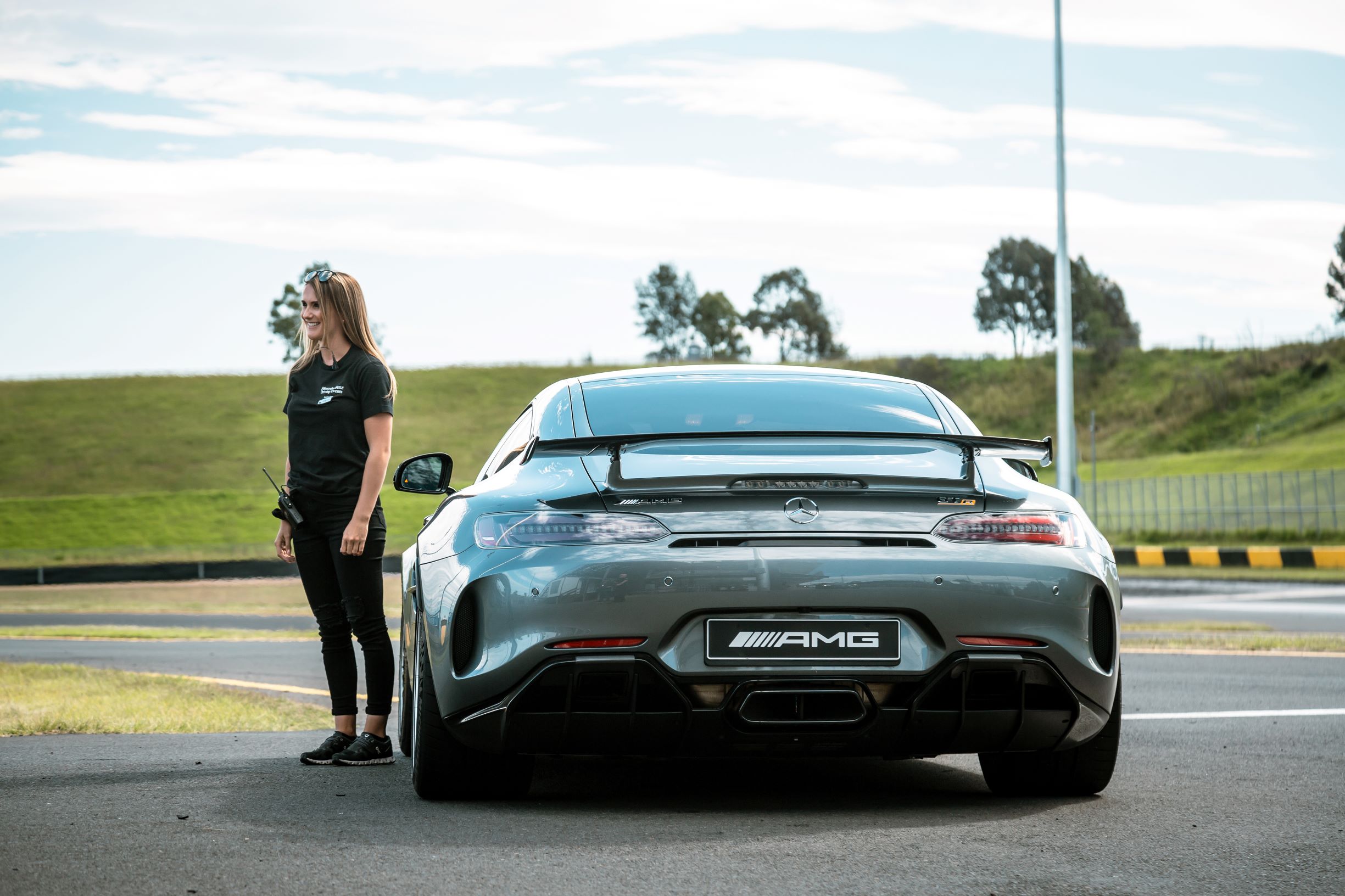 Fortunately for us, Mercedes recently let us take a short spin in the GT R at Sydney Motorsport Park. It was only a few laps – and we had TCR young gun Chelsea Angelo (pictured) riding shotgun to keep an eye on us – but it was enough to get a taste of what this German super coupe has to offer.

It’s much the same as the rest of the AMG GT line-up, but the small dial in the centre of the dashboard just below the four air-vents hints at the car’s true intent. The dial is for the multi-stage traction control, lifted from the GT3 racing variant, that allows you to turn up or down how much you can let the rear-end slide. Aside from that, it’s a lovely cabin – purposeful and sporty but still very luxurious. The flat-bottomed steering wheel is trimmed in Alcantara and is fitted with a variety of switches, including a dial to adjust the drive mode. It’s just just a dial though, it’s a small digital screen that looks suitably high-tech. The same tiny displays feature on the other key performance buttons that fill the console between the front seats.

As for the seats themselves, they are appropriately supportive to keep you stable at speed and they were comfortable for our brief stint behind the wheel; but we’ll reserve a long-term comfort rating until we do a longer stint.

The view from the driver’s seat feels special in the GT, you feel set really far back in the car and the windscreen looks wide and short as you look down the long bonnet.

All members of the AMG GT family share the same engine, a 4.0-litre twin-turbo V8 gem. It makes plenty of grunt and makes a musical bent-eight growl when it does.

The ‘standard’ GT makes 384kW of power and 670Nm of torque – impressive numbers. But for the GT R those figures jump to 430kW and 700Nm to give it some extra punch. And you can feel it as soon as you squeeze down the throttle exiting the pitlane. 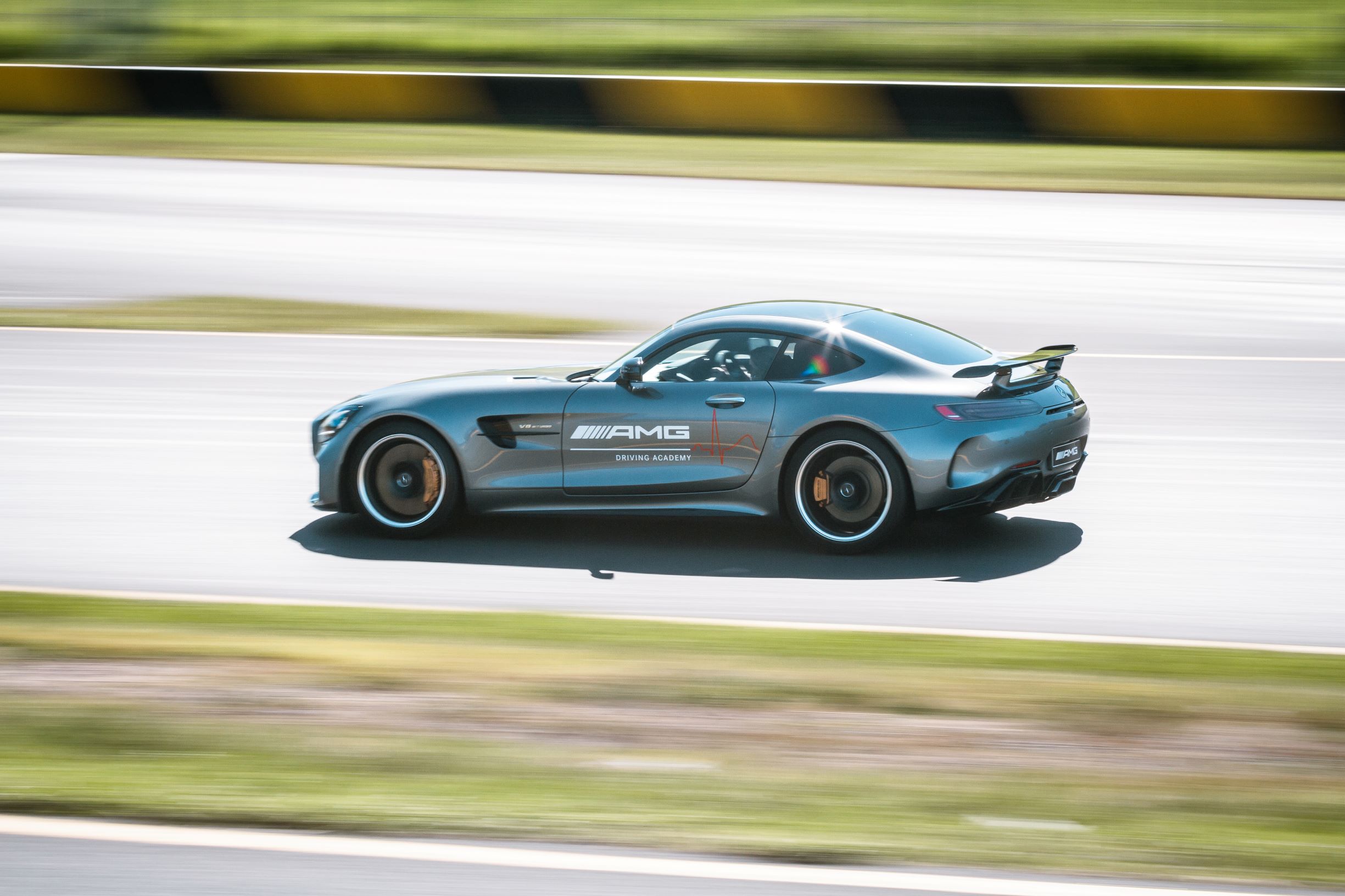 Having spent the rest of the day driving the rest of the models in the Mercedes-Benz range, including the AMG C63, (which you can read about here), the GT R immediately feels faster and more intense. It surges forward, building speed without hesitation and Turn Two at ‘The Creek’ comes up quicker than in any other car we’ve driven. The volume from the exhaust as I powered towards the corner sounds louder and throatier than even the already-sweet sounding GT.

Squeeze the throttle on exiting the corner and the GT R launches out the other side, feeling every bit the star of the AMG line-up that it is. You don’t have to squeeze it on either, you can be aggressive if you want and rely on the seven-level traction control system that’s taken directly from the GT3 version, I mentioned earlier.

Unfortunately we could unleash the engine fully on our brief test drive, as we were limited to 150km/h by safety regulations governing this particular event. But powering onto the main straight it certainly didn’t take long to hit our cap, so without restriction it’s a safe bet you’d be well north of 200km/h heading into Turn One.

The seven-speed dual-clutch transmission feels well mated to the engine, offering up fast, crisp changes when we tapped the paddles behind the steering wheel.

Our test drive was limited, but even a handful of laps is enough to get an impression of what the GT R is capable of. One of the surprising strengths of the ‘regular’ AMG GT is its turn in feel, because despite its long bonnet and very rearward cabin the front-end feels incredibly responsive and agile. The GT R improves on that sensation, offering excellent response when you turn the wheel, allowing you to place the car precisely on your preferred line. Naturally the GT R feels incredibly quick and stable through the corners, thanks to a combination of track-sorted suspension and the very big and very grippy Michelin Pilot Sport Cup 2 tyres. It allows you to push hard right from the start, confident in the knowledge that the limits come telegraphed so there’s time to correct any dramas.

One of the cleverest functions on the GT R is AMG’s Track Pace, a live data logging system built into the infotainment system that the company calls your “personal race engineer.” While it comes pre-loaded with certain tracks most are foreign (Nurburgring, Hockenheim, Laguna Seca, etc) but you can either load new track maps via a companion app or upload the circuit in real-time as you drive. Once the car knows the track it can help coach you through improving your lap time, showing you not only split times but also a huge array of data including (but not limited to) speed, lateral acceleration, engine speed, steering angle and accelerator pedal. It means, if you have the time, you can study each lap you do and see where you’re driving well and where you need to improve. Even just spending a few minutes looking through the basic data was interesting and it’s easy to imagine it would become a very handy tool for GT R owners to utilise anytime they hit the track.

While our time was limited it was hard not to be impressed by the AMG GT R. Without more time it’s impossible to compare it to its peers that we have more experience in, but it’s safe to say it would hold its own against the likes of the 911 GT3 RS.

Mercedes set out to turn AMG into a serious performance car brand, not just a tuning house, when it built the GT, and the way this car has evolved into the GT R is a clear mark of success.