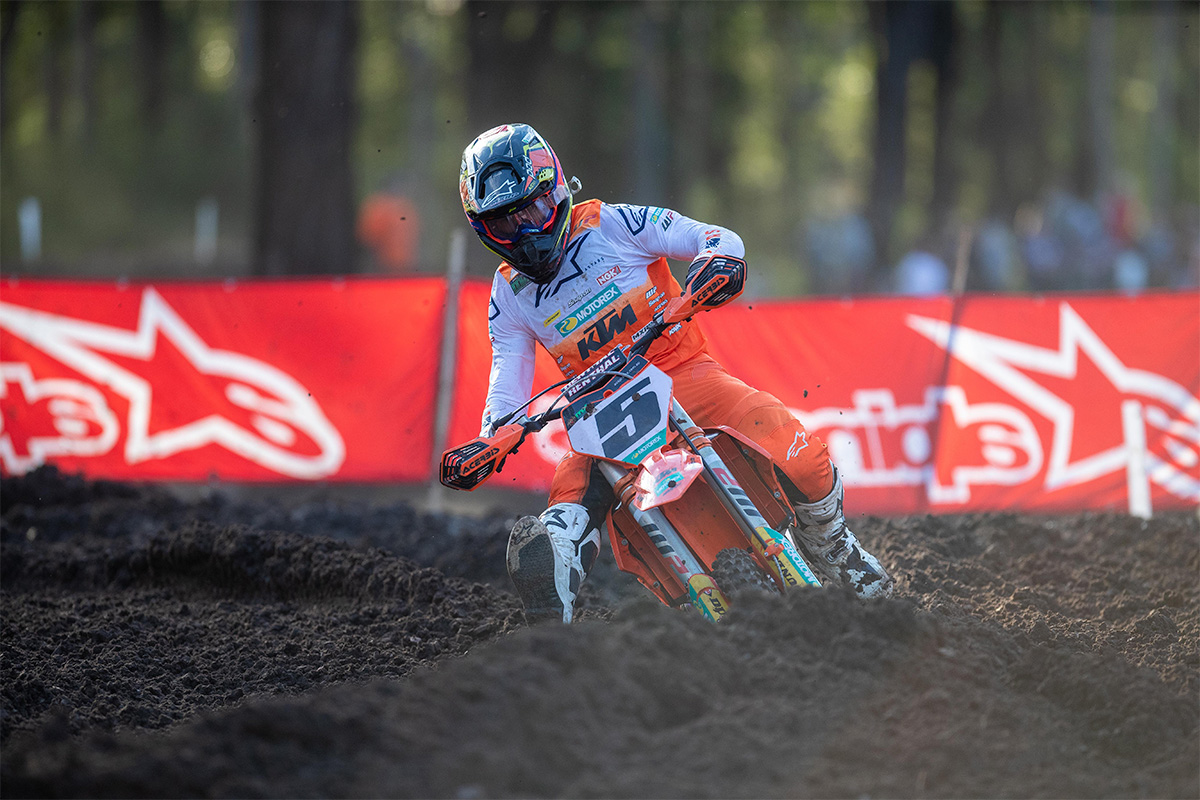 KTM Racing Team’s Kirk Gibbs experienced a mix of fortunes in the fifth round of the 2022 ProMX Championship at Maitland, as an injured thumb that he sustained while leading the opening MX1 moto hampered his end results.

Gibbs finished the day in 11th overall, but his results don’t tell the full story of how competitive the former national champion was early on.

Aboard the KTM 450 SX-F, Gibbs set an astonishing lap-time in qualifying and was the only rider to drop below the 1m45s mark as he made short work of the hard-pack New South Wales circuit.

In the opening moto, Gibbs rounded the first turn in fourth position, but clicked off quick passes to take the lead and begin stretching an advantage. However, disaster struck soon afterwards when he landed hard into the face of a jump, injuring his thumb in the process.

The Sunshine Coast-based racer continued to fight for points, eventually finishing in a gritty sixth place, despite a fall late in the moto. Fighting the pain, Gibbs lined up for the second race, but took a hard crash while circulating in seventh and opted to pull off the track.

Despite his bad luck, Gibbs remains in fifth in the MX1 point-standings as the ProMX Championship heads to Coffs Harbour, NSW, on 24 July.

Kirk Gibbs: “Today went from very high to very low. I came into this round with really good prep and feeling like I had the bike working perfectly. We started well by qualifying fastest and I felt saucy in the first race – I got into the lead, but a lap later it all turned on its head. I overcooked a jump and landed into the face of another, so it blew my throttle hand off the handlebar and damaged my thumb. I’m not sure of the extent of it, but from there I was four-finger death-gripping it and made another error late in the race. That one incident turned what could’ve been a great day into a really bad day… I’ll go home and see where I’m at, then hopefully move forward there.”