This is the most important electric car of 2019

This is the most important electric car of 2019

After 55 years as a petrol-powered sports coupe the blue oval is using the Mustang name to help launch itself into the electric vehicle race. The Mach-E takes clear styling inspiration from the Mustang but will do battle with the likes of the Tesla Model X, Jaguar I-Pace and next-generation Porsche Macan with an all-new electric powertrain.

Using the Mustang nameplate underlines Ford’s intent to make its mark on EVs, an area where it currently lags behind some key rivals, notably Tesla in the US. The clear intent is to leverage the good will built up around the Mustang brand in order to attract customers to sample a battery-powered Ford. But it’s not just a branding exercise, Ford has tried to give the Mach-E genuine Mustang levels of performance and will offer a wide range of models including a GT.

“The Mustang Mach-E wholeheartedly rejects the notion that electric vehicles are only good at reducing gas consumption,” said Hau Thai-Tang, Ford’s chief product development and purchasing officer. “People want a car that’s thrilling to drive, that looks gorgeous and that can easily adapt to their lifestyle – and the Mustang Mach-E delivers all of this in unmatched style.”

The Mach-E will be available with either rear- or all-wheel drive with a variety of power outputs. The standard model will boast 190kW of power and 414Nm (RWD) or 565Nm (AWD) of torque. Stepping up to Premium model will raise power to 210kW (RWD) or 248kW (AWD) while the range-topping GT will boast 342kW and 830Nm in AWD only.

According to Ford, the Mach-E GT will be able to out-sprint a Porsche Macan Turbo 0-100km/h while still having a range of 375km.

The standard powertrain range will be 337km, with the more powerful extended range models capable of an estimated 482km between visits to the powerpoint.

Ford has developed three distinct drive modes for the Mach-E – Whisper, Engage and Unbridled. Switching between them will alter the SUVs responsiveness of the throttle and steering as well as the sound it makes and even the ambient lighting. 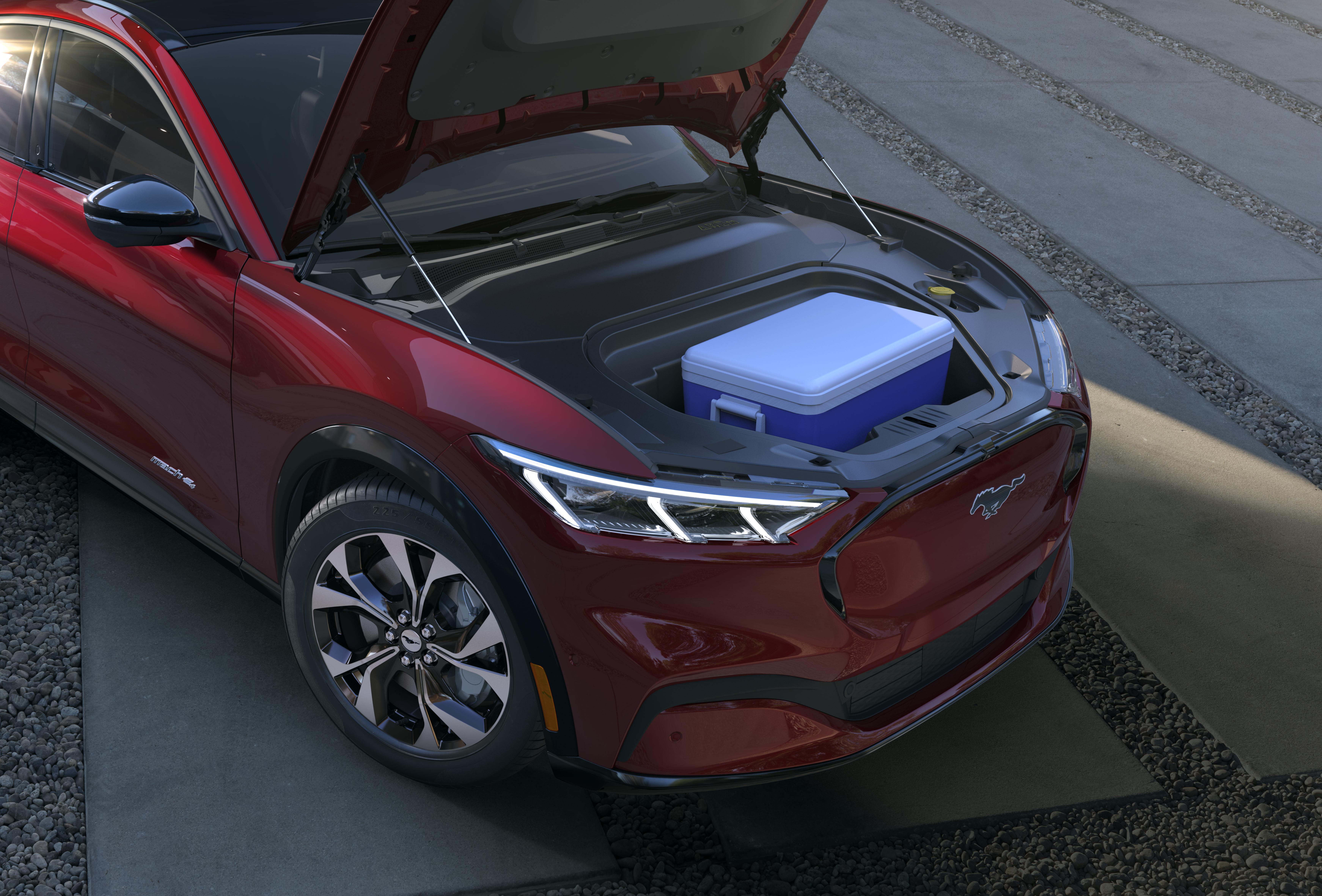 The exterior styling has clear elements of the Mustang coupe, albeit morphed to fit the shape of a five-seat SUV. The signature Mustang grille shape has been integrated into the front end styling, even though the Mach-E doesn’t need a traditional grille. Other ‘Stang design elements include the long bonnet, angular headlights and swooping roofline.

It’s not just about looking good either, there are some clever design features worked into the new model, to take advantage of the extra space liberated by not having an internal combustion engine. For example, the front truck (or frunk in the modern lingo) under the bonnet doubles as an Esky, with a hard liner and drainage hole, so owners can fill it with ice to keep their food and drinks cold when they travel.

Inside there’s no retro Mustang, aircraft-inspired dials, instead it’s utterly modern, with just a pair of digital screens – one for instruments and the second for infotainment. The 15.5-inch centre screen looks more like it belongs in a Tesla than a Mustang, but it runs Ford’s latest generation SYNC system that includes a more intuitive interface to control the multimedia and navigation.

Seating for five comes standard in another major departure for the Mustang name as is the generous boot, with a claimed 800-litres of luggage space.

While it may be a major departure for the Mustang as we know it, Ford chairman, Bill Ford, believes it holds true to the values of the brand. 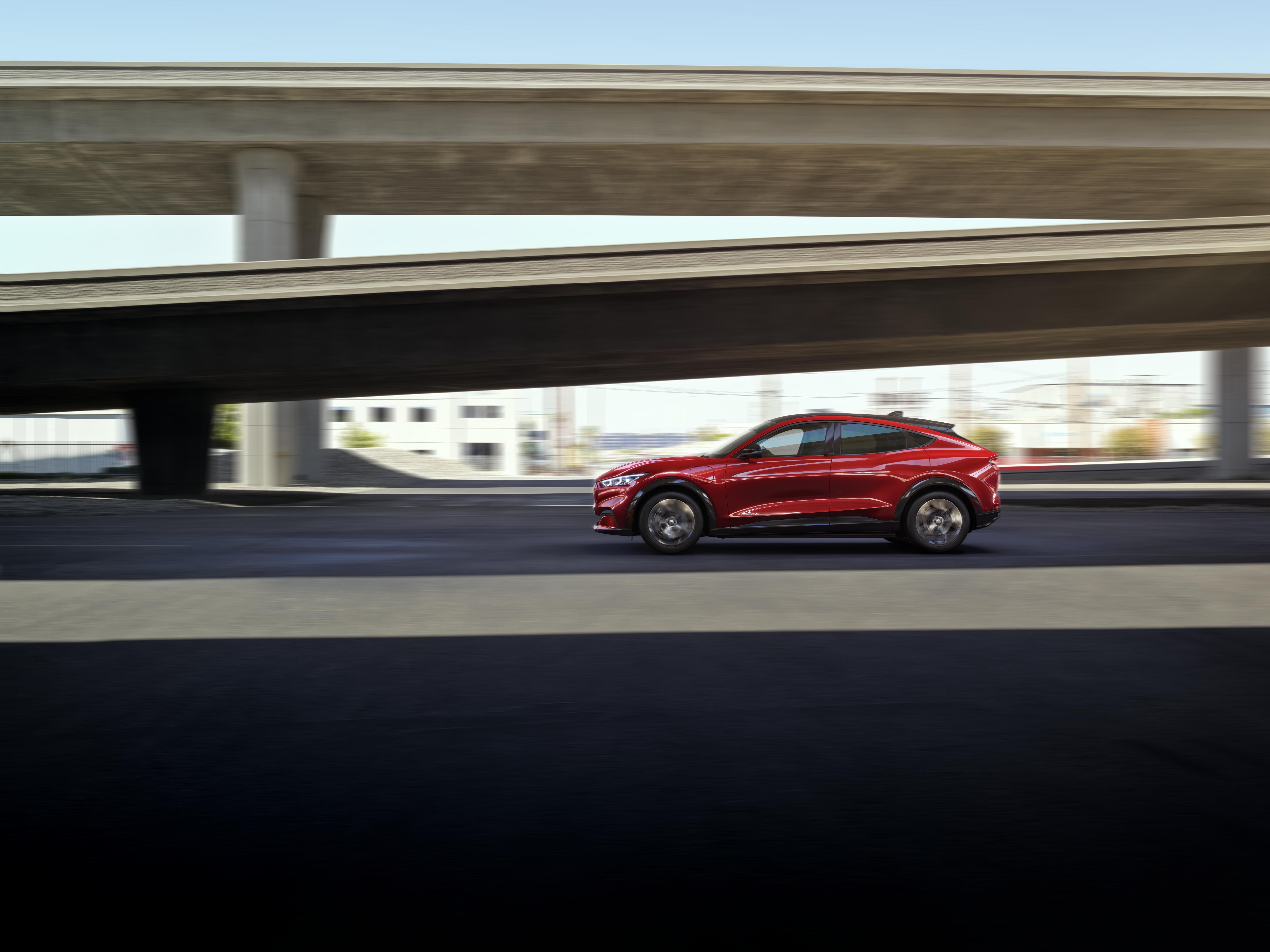 “At the first-ever Detroit auto show, Henry Ford said he was working on something that would strike like forked lightning,” Bill Ford explained. “That was the Model T. Today, the Ford Motor Company is proud to unveil a car that strikes like forked lightning all over again. The all-new, all-electric Mustang Mach-E. It’s fast. It’s fun. It’s freedom. For a new generation of Mustang owners.”

Customers who order their Mach-E now will need to be patient, with the first deliveries not expected until late 2020 or early 2021, depending on specifications. But that’s a lot shorter than Australians will be forced to wait. Officially Ford Australia has no plans to offer the Mach-E locally, despite the huge success of the regular Mustang and the popularity of SUVs.

Typically it’s easier for EVs to be engineered in left- and right-hand drive and given Australia eventually got the Mustang coupe, perhaps it’s worth crossing your fingers.