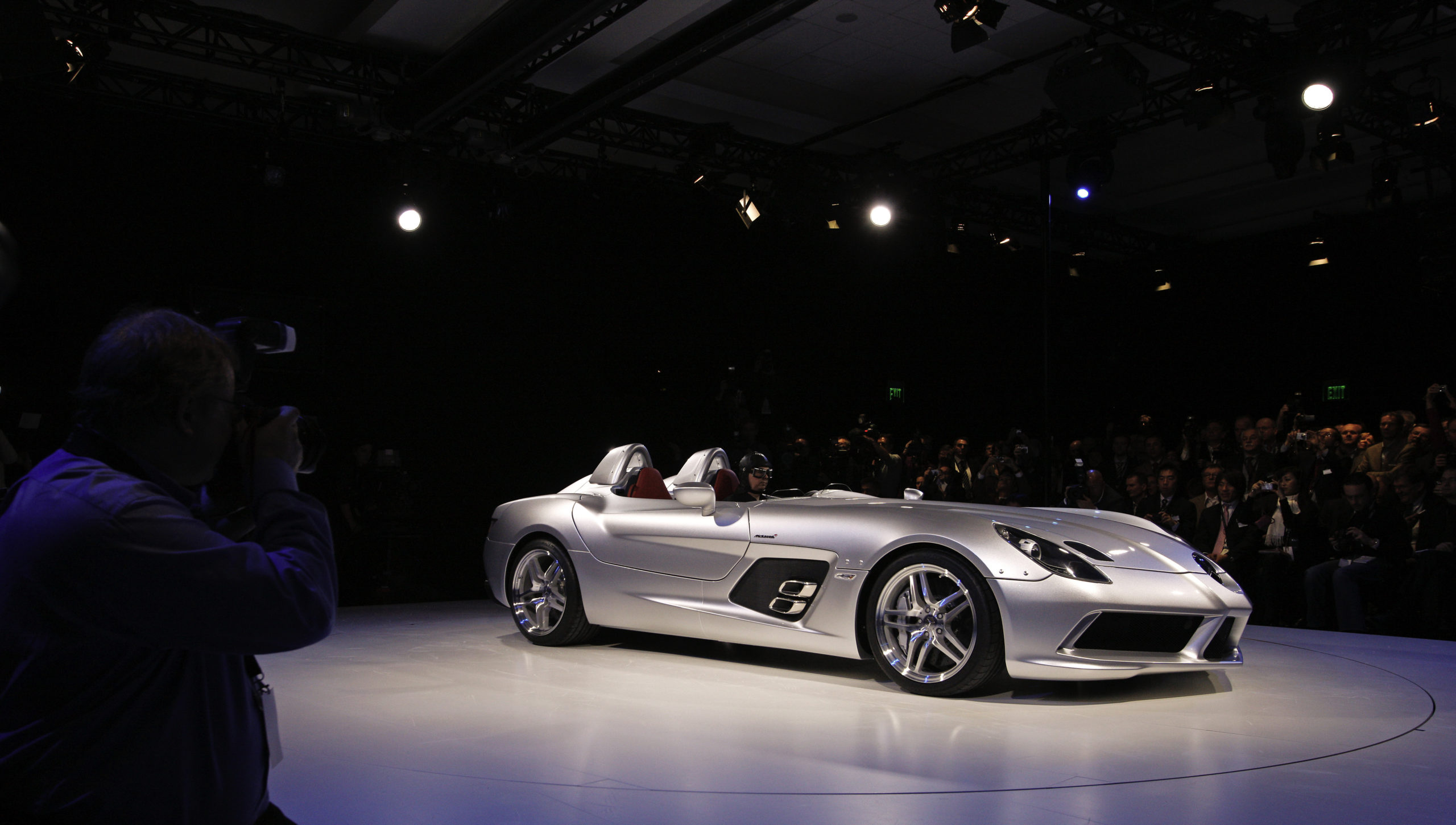 In a career as diverse as Sir Stirling Moss enjoyed, picking one car that stands out above the others is difficult. For many it will be a Lotus or a Vanwall, but for some his most famous set of wheels was the Mercedes-Benz 300 SLR – the car he claimed arguably his greatest victory in the 1955 Mille Miglia.

It was this famous front-engine machine that was the inspiration for one of the most under-rated supercars of the last 20 years, the Mercedes-Benz SLR McLaren. And it has very clear connections to Moss. 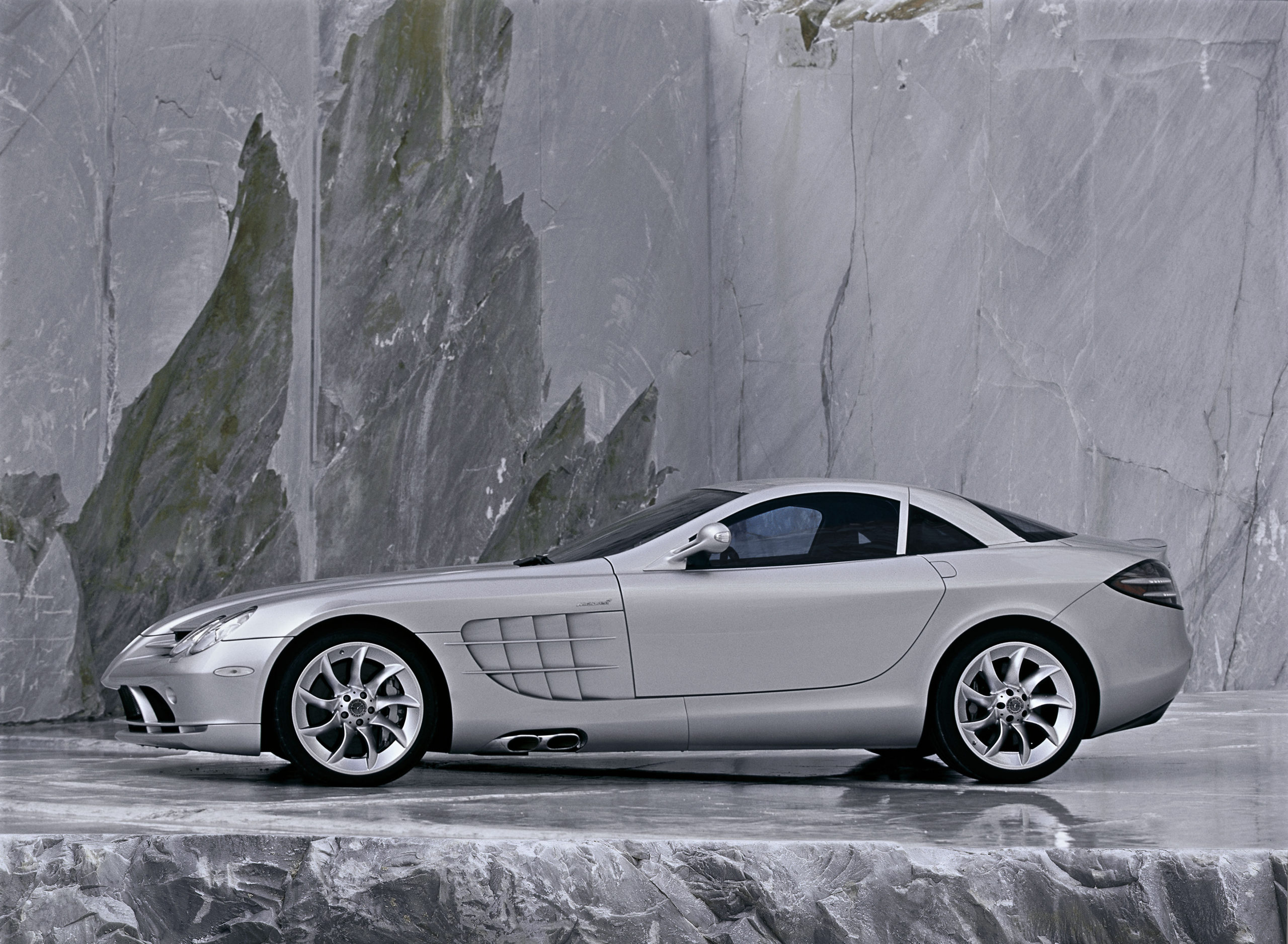 The SLR McLaren went on sale in 2003 and was the result of the then-successful partnership between the German car giant and the British Formula 1 team. At that point Mercedes owned a 40 per cent stake in McLaren so it made sense for the two to work together.

The SLR McLaren was largely misunderstood because while it had the performance to match contemporary supercars, it had a front-engine layout that was more in-line with a grand tourer. The combined efforts of Mercedes-Benz and McLaren unsurprisingly resulted in an incredibly sophisticated machine, with an array of cutting-edge technology.

The engine was a hand-built, all-aluminium 5.4-litre supercharged V8 with a dry sump lubrication system. Initially it was tuned to make 460kW of power and 780Nm of torque. To put that in context the Porsche Carrera GT (which also came out in 2003) made 450kW/590Nm from its 5.7-litre V10 and the Ferrari Enzo (launched in 2002) produced 485kW/657Nm from its 6.0-litre V12. So in horsepower terms, it was more than capable of holding its own againsts its supercar peers. The SLR McLaren was a hi-tech machine.

What made it dramatically different from the Porsche and Ferrari was where the engine was located, ahead of the cabin rather behind it. However, McLaren shifted the engine as far rearward as possible, getting it behind the front-axle for what was called a ‘front-mid’ layout.

To handle all the grunt Mercedes opted to fit a five-speed automatic transmission, rather than its seven-speed unit, that sent the power to the rear wheels. The brakes were made from F1-spec carbon ceramic material to provide equivalent stopping power to match the engine.

To try and keep the weight down the entire body was made from carbon-fibre reinforced plastic (then an extremely rare material in car construction) but it still tipped the scales at 1750kg; more than 200kg heavier than the Porsche and Ferrari. 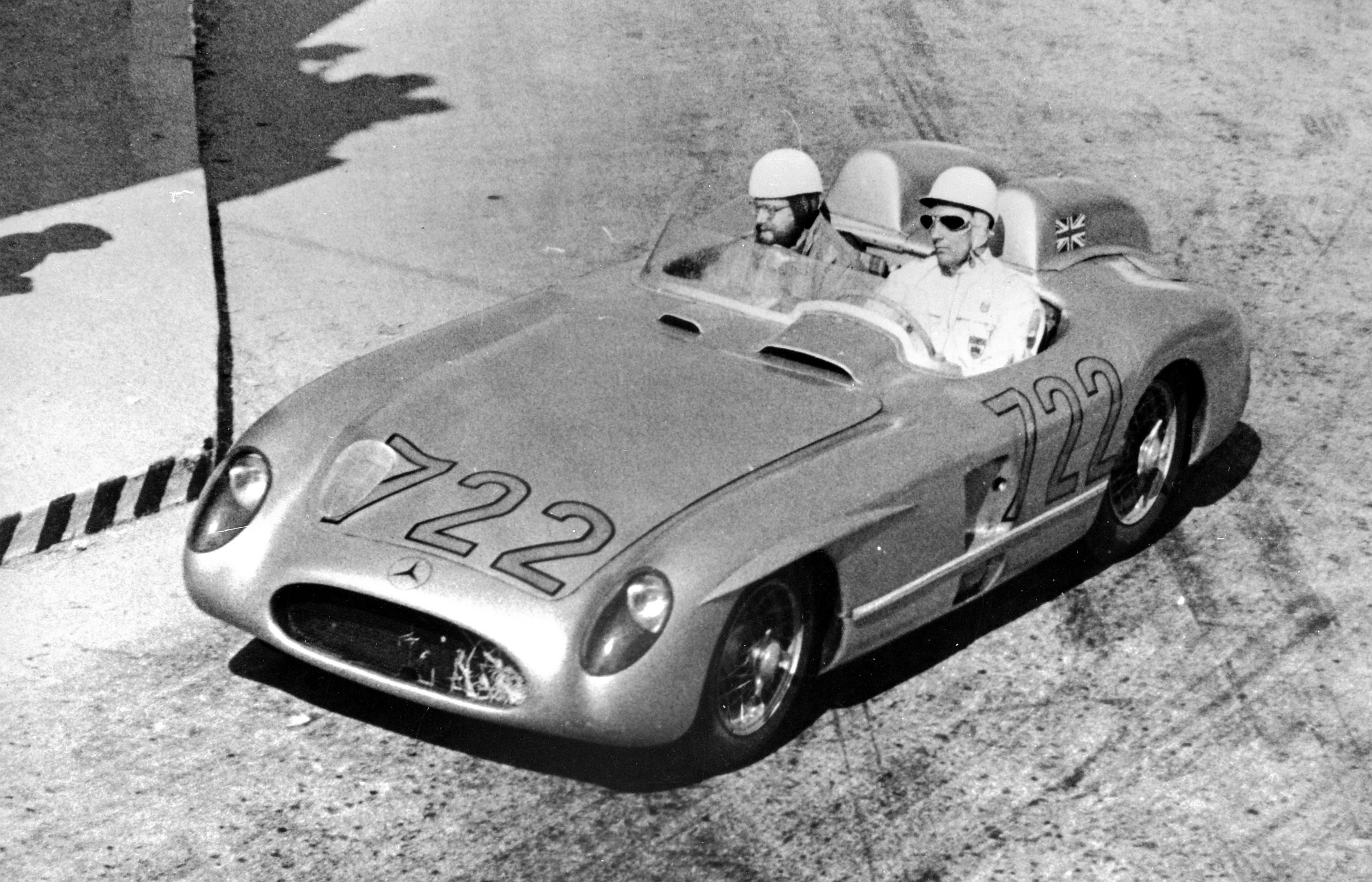 Moss and Jenkinson in the 1955 Mille Miglia.

While the link between the 1955 300 SLR and the new model was already strong, Mercedes left no doubt about how highly it regarded Moss’ Mille Miglia victory when it introduced an updated SLR McLaren in 2006 – it was called the 722 Edition. The number was the same wore by Moss and co-driver Denis Jenkinson in 1955; representing their starting time of 7:22am.

The 722 Edition boosted the already awesome performance of the Mercedes super coupe, taking power to 478kW and torque to 820Nm. Handling was improved with new, lighter 19-inch alloy wheels and revised suspension.

The German company honoured the British racing legend even further in 2009 with a limited edition run of the car called the Mercedes-Benz SLR Stirling Moss; a rare honour from the brand.
But as the company declared when announcing the car: “At that time, the 300 SLR was the master of the racetrack. But the master of the 300 SLR was Stirling Moss.” The unveiling of the Mercedes-Benz SLR Stirling Moss.

It featured an even more potent version of the engine, now tuned to make 485kW and 820Nm which was enough to give it a top speed of 350km/h. However, the bigger change was the body, which was largely redesigned to ensure the Stirling Moss Edition stood apart; while also saving approximately 200kg.

Naturally that meant ditching the roof and windscreen to ensure the modern take as closely resembled the 1955 open-top sports prototype.

Mercedes and McLaren built just 75 examples of the SLR Stirling Moss to enhance its collectible status. Everyone knows the classic Mercedes-Benz 300 SL ‘Gullwing’, but there’s another car from that era that is largely unknown – the Mercedes-Benz SLR Uhlenhaut Coupe.

While the 300 SL had numerous celebrity owners – including Pablo Picasso, Paul Newman, Frank Lloyd Wright and Juan Manuel Fangio – and Mercedes built more than 2600 examples of them, the 300 SLR was limited to just one.

Rudolf Uhlenhaut was Mercedes’ motorsport chief during Moss’ time and had a pair of the 300 SLR redesigned to tackle the Carrera Panamericana road rally. However, when the German brand pulled out of all competition in the wake of its Le Mans tragedy, Uhlenhaut was able to turn one of the new 300 SLR coupes into his personal road car.

The race-car-turned-company-car was reportedly capable of hitting 290km/h, which made it one of the fastest road cars on the planet at the time. Since Uhlenhaut’s passing in 1989 Mercedes has carefully looked after the car, often displaying it at its museum in Stuttgart.

It might be the most valuable classic car in the world too, with various reports estimating it being worth anywhere from $60-100m. Not that Mercedes will ever sell such a rare piece of its history.