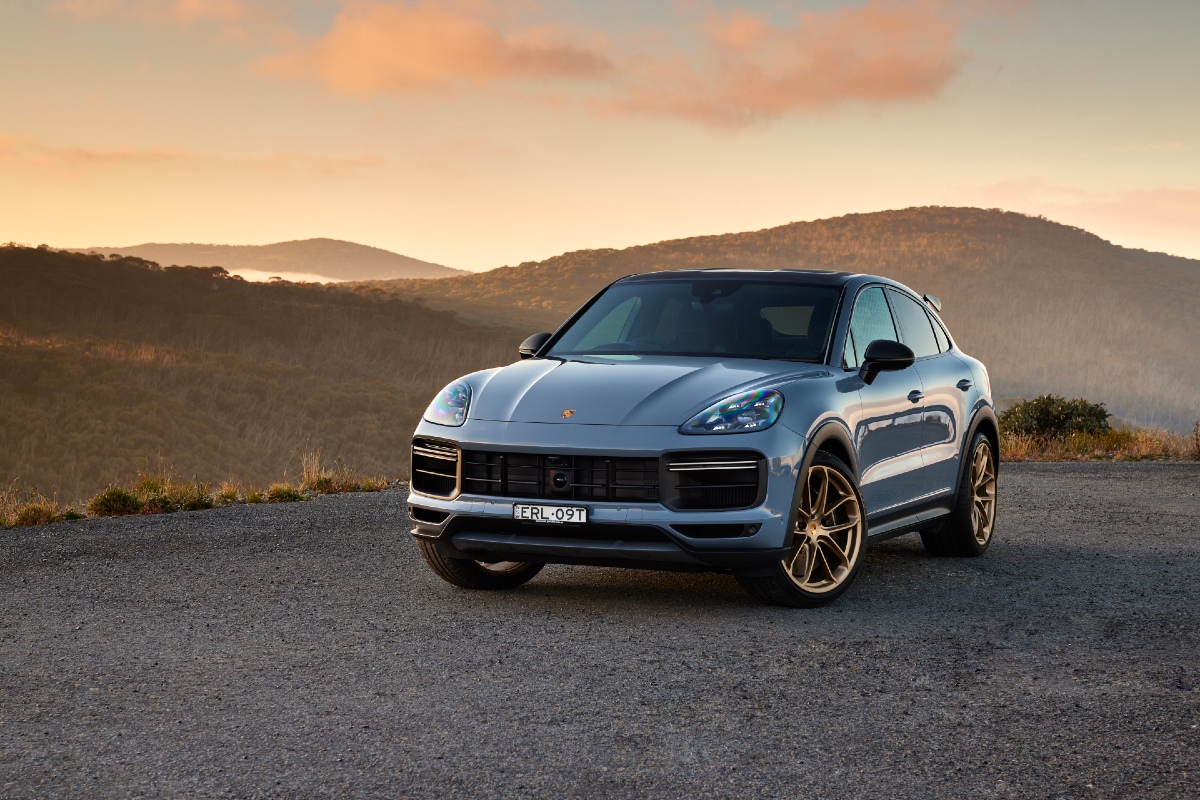 The car that puts the ‘sports’ back into Sports Utility Vehicle. This is the ultimate iteration of the German brand’s performance SUV, pushing beyond the already impressive Turbo with every element of the Turbo GT dialed up for more performance.

It comes at a time when the Cayenne is getting increasing competition, with the likes of the Aston Martin DBX, Bentley Bentayga and Ferrari Purosangue all increasingly blurring the line between a performance car and an SUV.

READ MORE: Why the Porsche Cayenne is the brand’s most important model 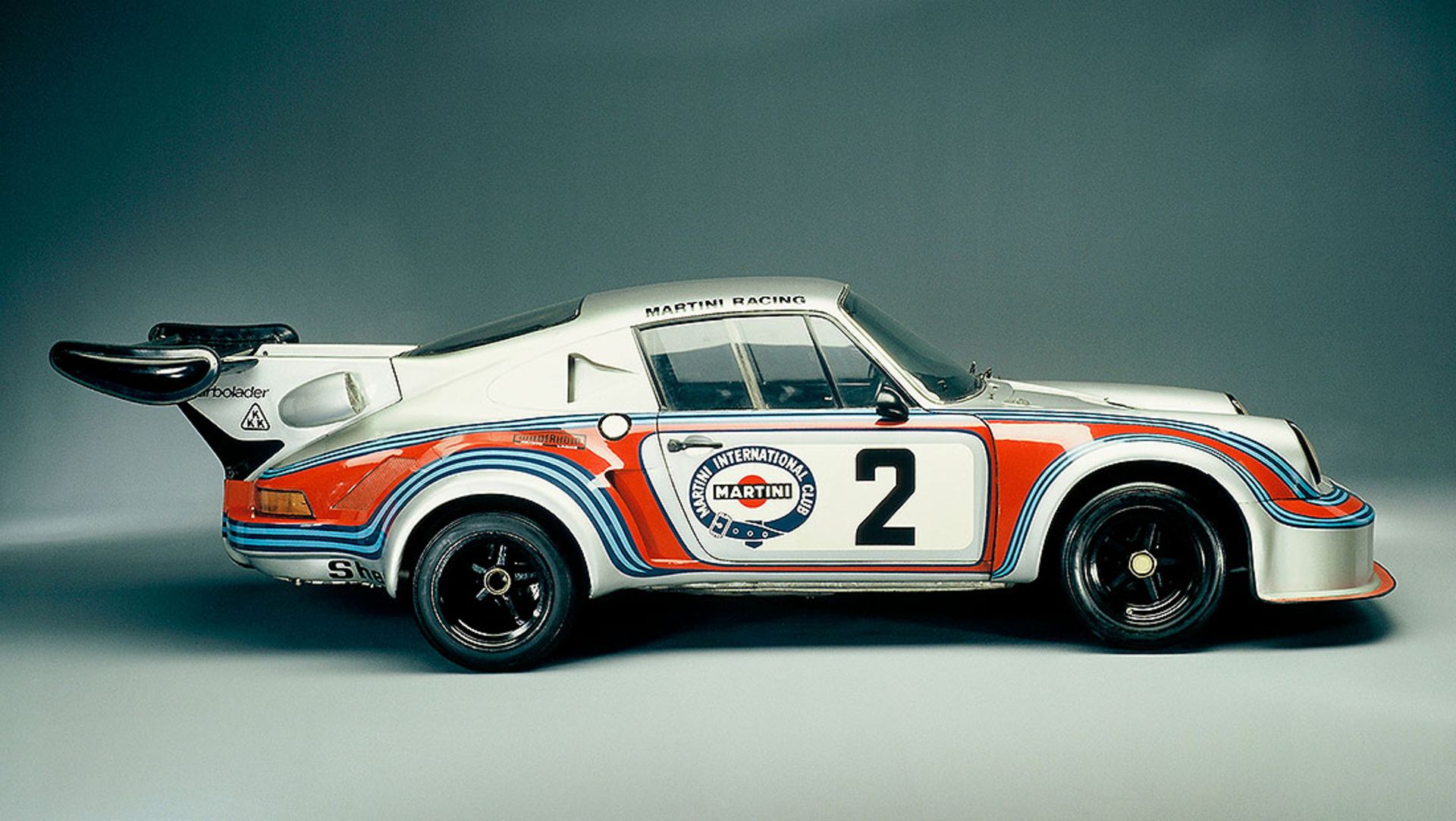 The first Porsche 911 Turbo concept arrived in 1973 and even then it had motorsports in its DNA, because the company had been racing with a turbocharged engine in the US-based Can-Am series.
That first 911 spawned a racing car the following season, the 911 Carrera RSR Turbo, which competed in the ‘74 sports car season to give the company more knowledge ahead of the first production version arriving in ‘75.

Since then the company has raced a variety of turbocharged engines including in 2023, with the new 963 LMDh powered by a twin-turbo 4.6-litre V8; similar in size to the Cayenne Turbo GT’s powerplant but actually based on the 918 Spyder’s engine. 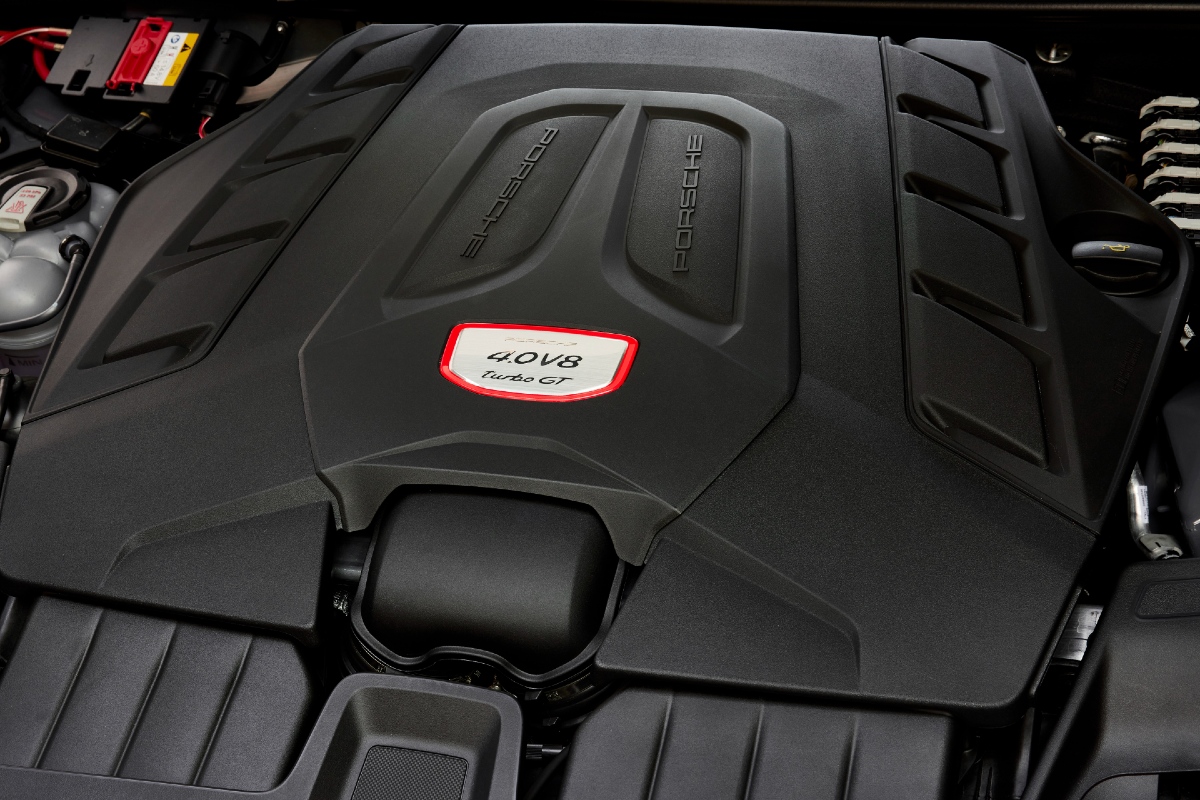 The engine in question is the same 4.0-litre twin-turbo V8 petrol engine used in the Cayenne Turbo but it has been dialed up to produce significantly more performance in this new variant. It punches out an impressive 471kW of power and 850Nm of torque, that’s an extra 67kW and 80Nm over the Cayenne Turbo which is a significant upgrade.

The engine is paired to an eight-speed automatic transmission, which has been modified for faster shifts for the Turbo GT compared to the rest of the range.

Porsche claims that despite its size the Turbo GT has enough power to launch 0-100km/h in just 3.3 seconds, which is more than half-a-second (0.6 seconds to be precise) quicker than the Cayenne Turbo manages. It feels every millisecond that quick on the road, with immense performance whenever you bury your right foot.

However, despite all that performance potential, the Turbo GT is also a well-behaved SUV around town. If you just want to cruise down the road or plod along in traffic it’s equally happy doing that as it is accelerating hard. That’s not something all high-performance engines can claim, with some feeling high-strung and awkward at lower speeds.

The Turbo GT may be a track-capable performance flagship but it still plays the role of family-friendly SUV. 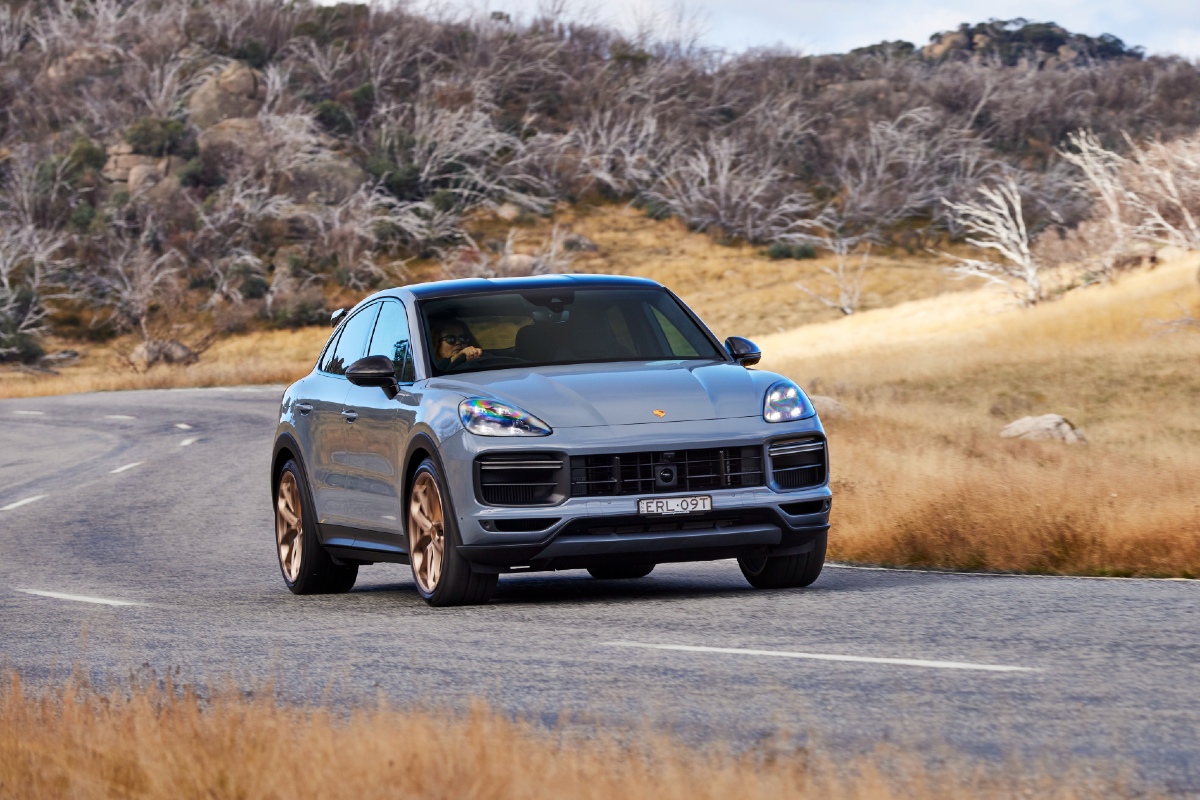 Porsche didn’t just drop a more powerful engine under the bonnet and slap a new badge on the back. This is a complete overhaul and that means some major changes to the chassis to improve handling, both the passive and active elements.

That means, for starters, the Turbo GT sits lower thanks to a 17mm ride height reduction, but more importantly, the Porsche Dynamic Chassis Control (PDCC) active roll stabilisation system has been given a new software set-up to make it sit flatter when cornering.

On top of that the Turbo GT rides on 22-inch alloy wheels wrapped with Pirelli P Zero Corsa performance tyres that provide a significant amount of grip.

To ensure this big, powerful SUV can safely stop it comes standard with Porsche Ceramic Composite Brakes (PCCB). These are both very powerful and consistent, especially once they get some heat into them.

All this technology combines to make the Cayenne handle better than such a big, tall SUV really should have any right to. Obviously it’s not as sharp or agile as a 911, but for an SUV it feels responsive, direct and sits surprisingly flat when cornering.

But equally, as we mentioned about the engine, it has no trouble playing the role of ‘family SUV’ to handle the weekly chores around town. So it really is a fantastic all-rounder package. Taking an SUV onto a racetrack may seem an unlikely destination, but I’d love to see how the Turbo GT handled itself on a fast, flowing track like Phillip Island. The engine would rocket you down Gardner Straight and the long corners would seemingly be well suited to the state-of-the-art chassis. 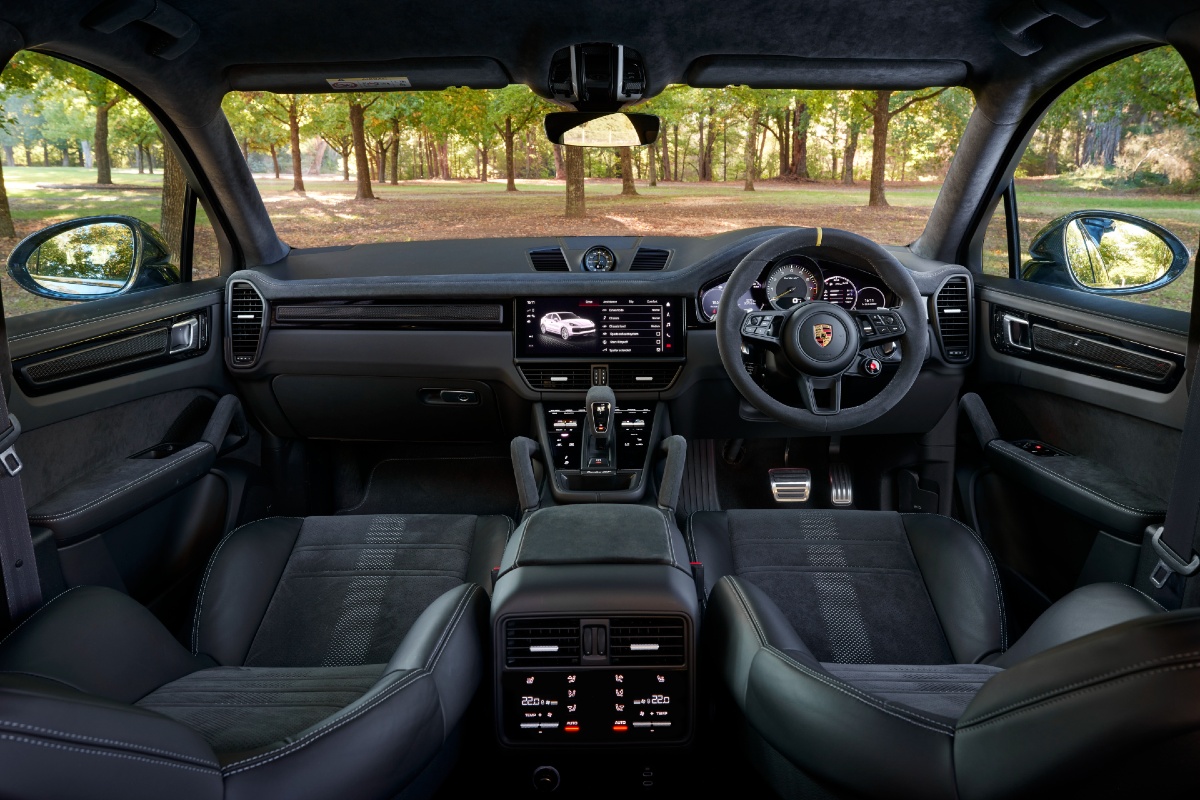 It has the size of a Cayenne Coupe, with the style of a 911. There’s room for four in comfort (even with the sloping roofline) but what stands out immediately are the sporty touches.

There’s loads of Alcantara throughout the cabin, on the steering wheel, seats and other touch points. It gives you that feeling that you’re in something with real performance intent, which is in keeping with the theme of the Turbo GT.

How much does the Porsche Cayenne Turbo GT cost? 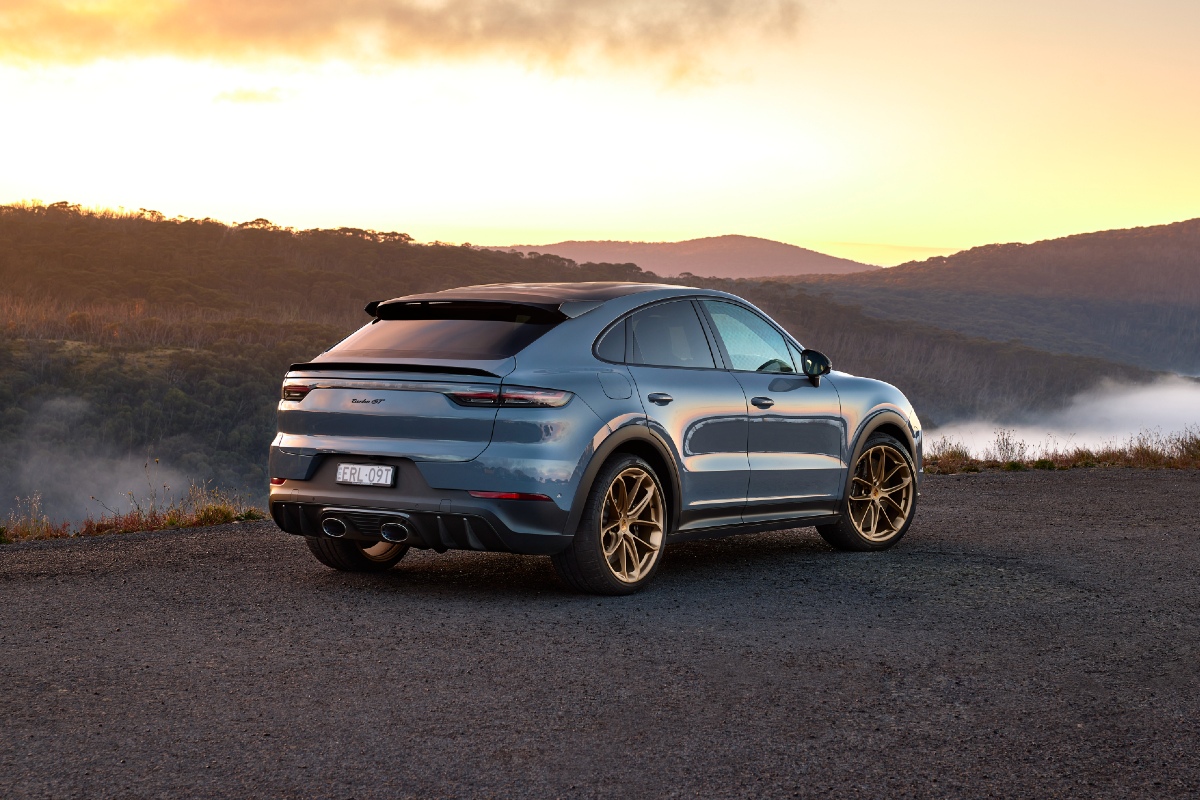 It’s easy to say ‘yes’ because there is not a lot to dislike about the Cayenne Turbo GT. Certainly if your priority is performance then this is the Porsche SUV for you. However, if ultimately you’re looking for a better balance between performance and price, the rest of the Cayenne range has plenty of other appealing options too.