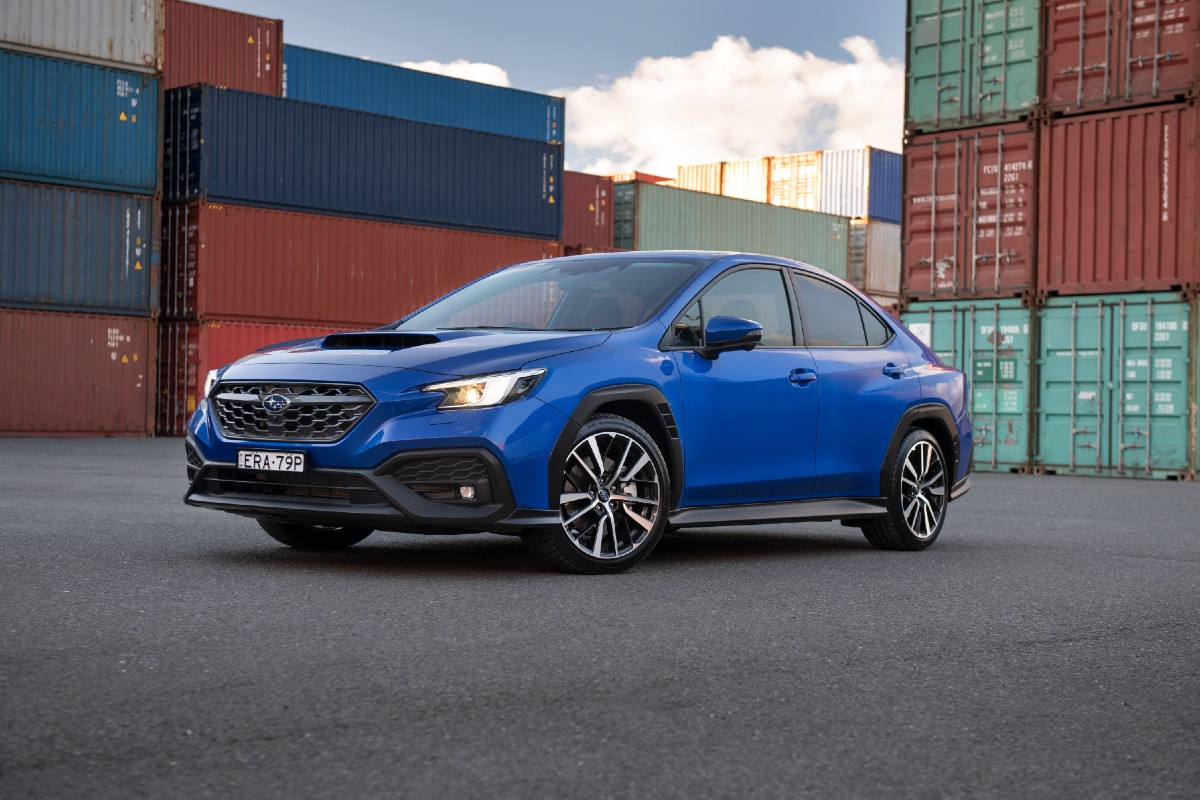 The car Subaru has been trying to build for nearly 20 years. Seemingly since its earliest days, when it jumped off the rally stage and into the affordable performance car market, shaking it up permanently.

The original Impreza WRX was as raw as it was fast. It made no secret that performance was its priority and it paid little attention to civility. Since then, and with each new generation, Subaru has tried to make the WRX more civil and easy to live with but with mixed results.

Until now. This is the most ‘grown up’ WRX yet, benefitting from the decades of knowledge Subaru has gained since the original and applying it to make a more sophisticated, but still very quick, car. 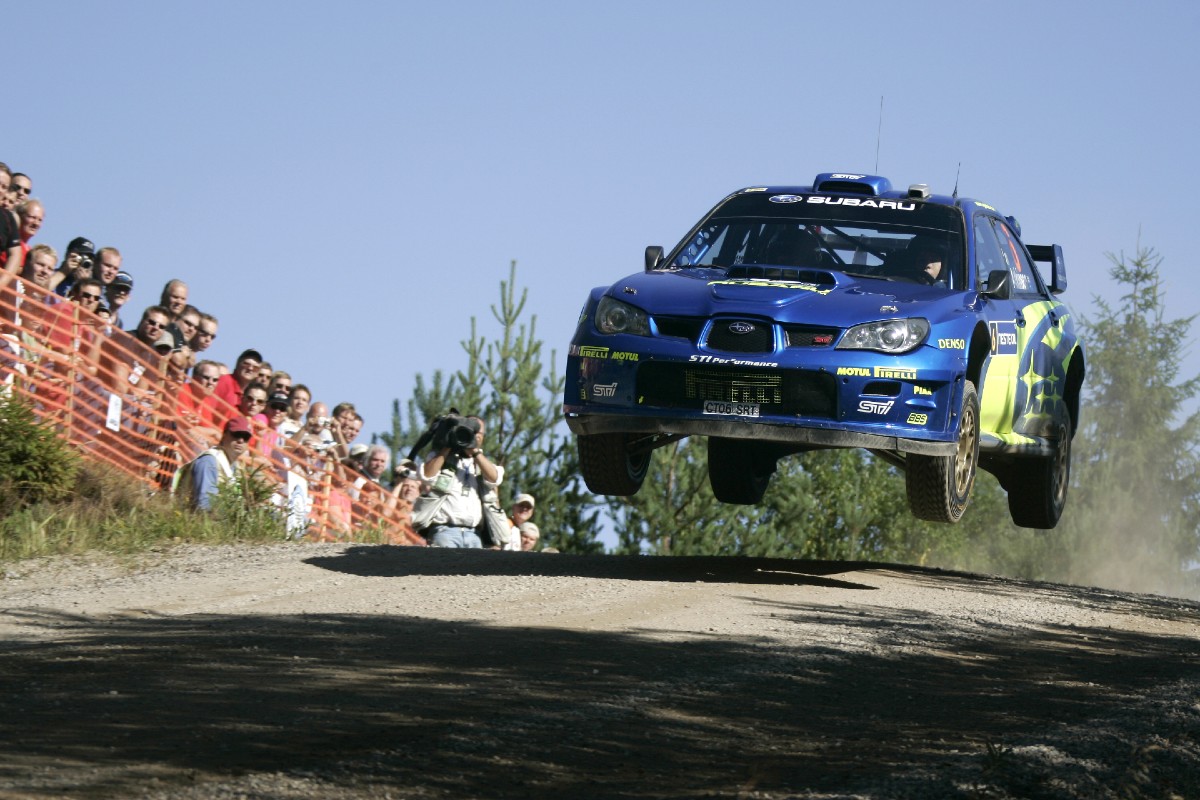 The WRX came to life under the Group A regulations, the name literally comes from ‘World Rally eXperimental’ because Subaru until this point in its history had never built a true performance car.

The original WRX took a standard Impreza small car and added a turbocharged engine and all-wheel drive to make it a winner in the WRC through the 1990s and early 2000s. Some of the famous names to win in the WRC for Subaru include Colin McRae, Carlos Sainz, Richard Burns and Petter Solberg.

But over time, the links to rallying have become more distant and harder to feel in each passing model.

Subaru hasn’t been a part of the WRC since the end of the 2008 season, and since then there have been two generations of new WRX models, so the idea that this latest model is still ‘rally-bred’ is harder to believe. 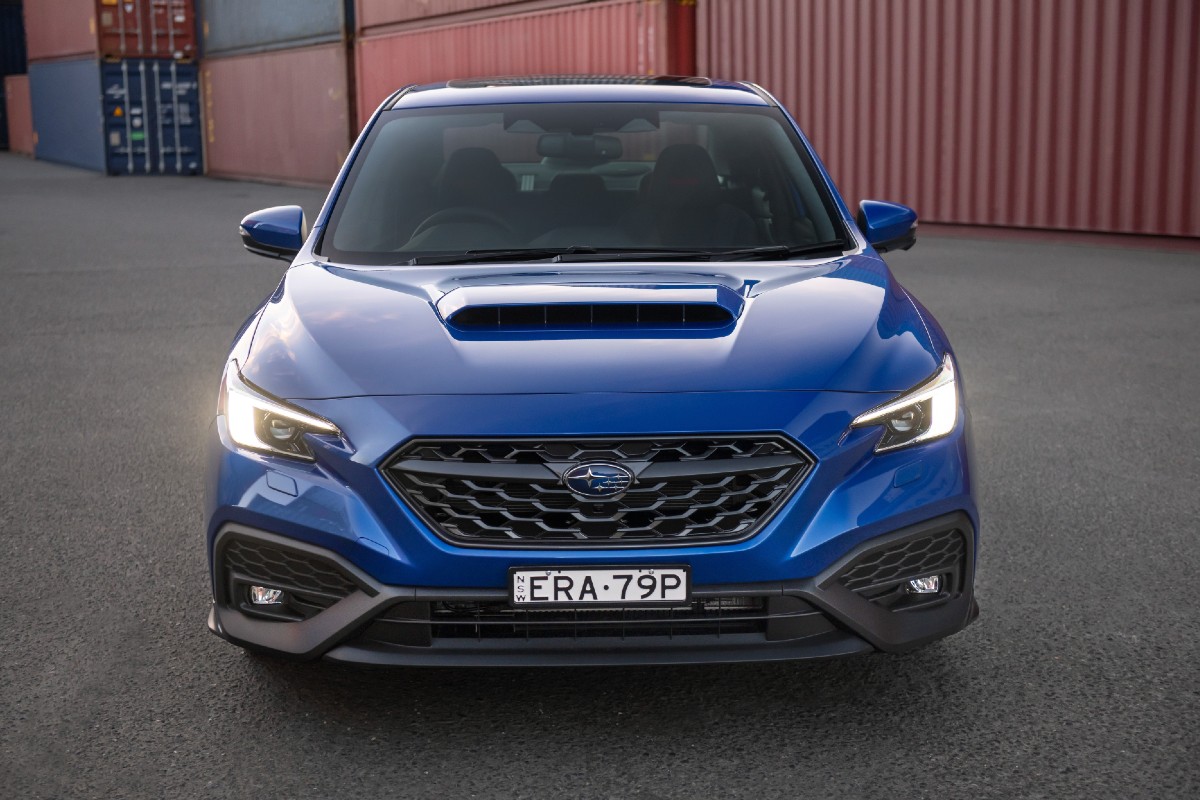 One of the biggest changes for this latest iteration WRX is an all-new engine. The 2.0-litre four-cylinder ‘boxer’ engine that has served the model for generations has been superseded by a new, larger 2.4-litre flat-four.

Despite the increased capacity, performance hasn’t taken a leap forward. Power is up to 202kW from 197kW but torque is 350Nm, the same as the smaller engine. However, Subaru claims the torque is available across a wider band, which improves the drivability of the engine.

Not surprisingly given the only modest increase in performance, the new engine doesn’t feel that much faster than the old 2.0-litre. It’s still a quick car, but it feels like Subaru missed an opportunity to make it even quicker for what is an all-new model.

The bigger problem though is the transmission. We’re only focused on the tS model for now, which is equipped with what the company class the ‘Subaru Performance Transmission’ but is actually a continuously variable transmission (CVT). Despite some F1 teams experimenting with CVTs in the early ‘90s this style of gearbox has never been conducive to extracting the best driving experience from a performance car.

Subaru has tried its best to make this transmission feel more like a conventional automatic or a dual-clutch transmission, but it still has that trademark CVT feeling of slackness when you put your foot down. It doesn’t allow the engine to rev like a conventional auto so instead of feeling exciting and engaging it makes it feel dull and slow-witted.

Fortunately, Subaru has stayed loyal to enthusiasts and there’s a six-speed manual gearbox available. We’ll have a review of that in the coming weeks, so stay tuned… 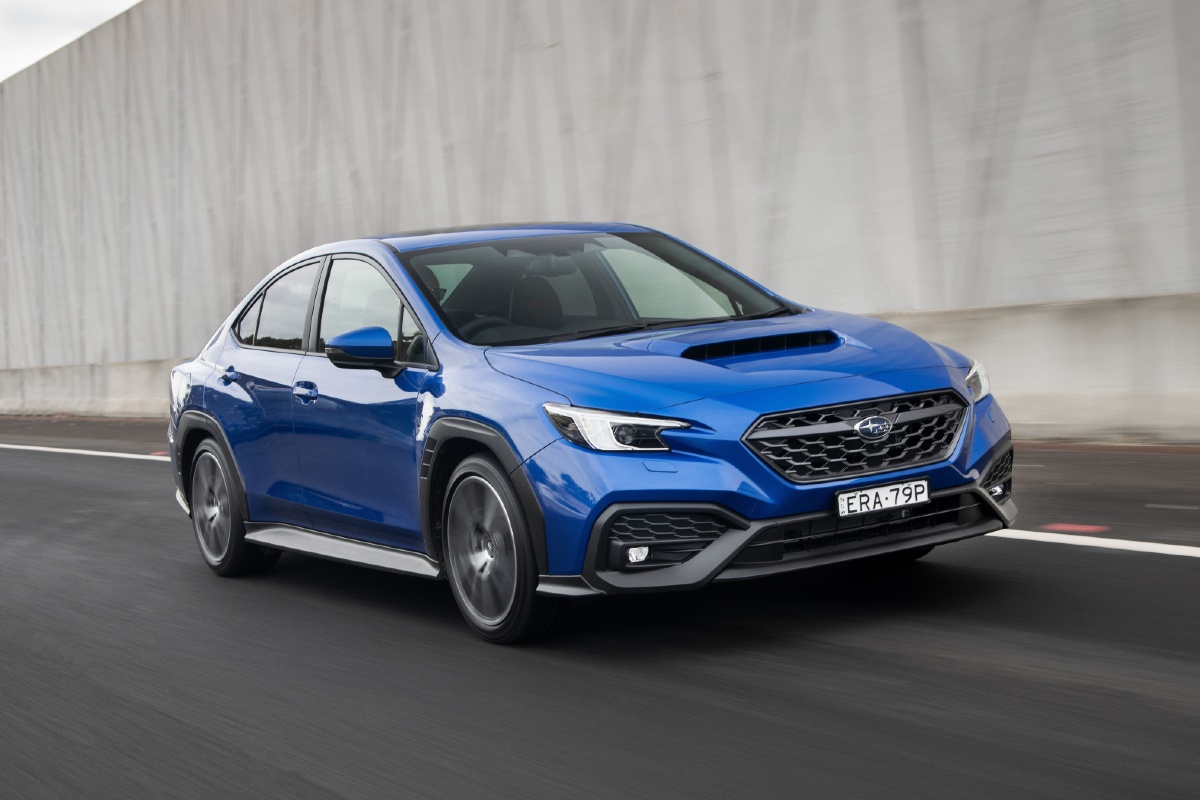 While the powertrain is a bit of a let down, the great news for WRX fans is this new generation transitions to the newer Subaru Global Platform (SGP), which has a very positive impact on how it drives.

The SGP debuted with the new Impreza model back in 2016 and it was immediately evident that this new architecture was a big leap forward. It’s lighter and stiffer than before, which makes for a much better basis to build a performance car.

The result is the new WRX feels really sharp and dynamically capable on the road. The high-grade tS model gets adaptive dampers, which allows you to alter the character of the car on the fly. In the ‘Normal’ or ‘Comfort’ setting the ride is quite compliant but when you dial up ‘Sport’ or ‘Sport+’ the dampers get noticeably more firm and responsive.

However, perhaps the even bigger change is just how quiet and refined the cabin is.

This is not a frantic or edge-of-you-seat hot hatch, this feels much more ‘grown up’ than the WRX that came before it. That won’t appeal to everyone but Subaru has achieved the goal it set for itself several generations ago to make the WRX less ‘boy racer’ and a more polished, well-rounded performance sedan. 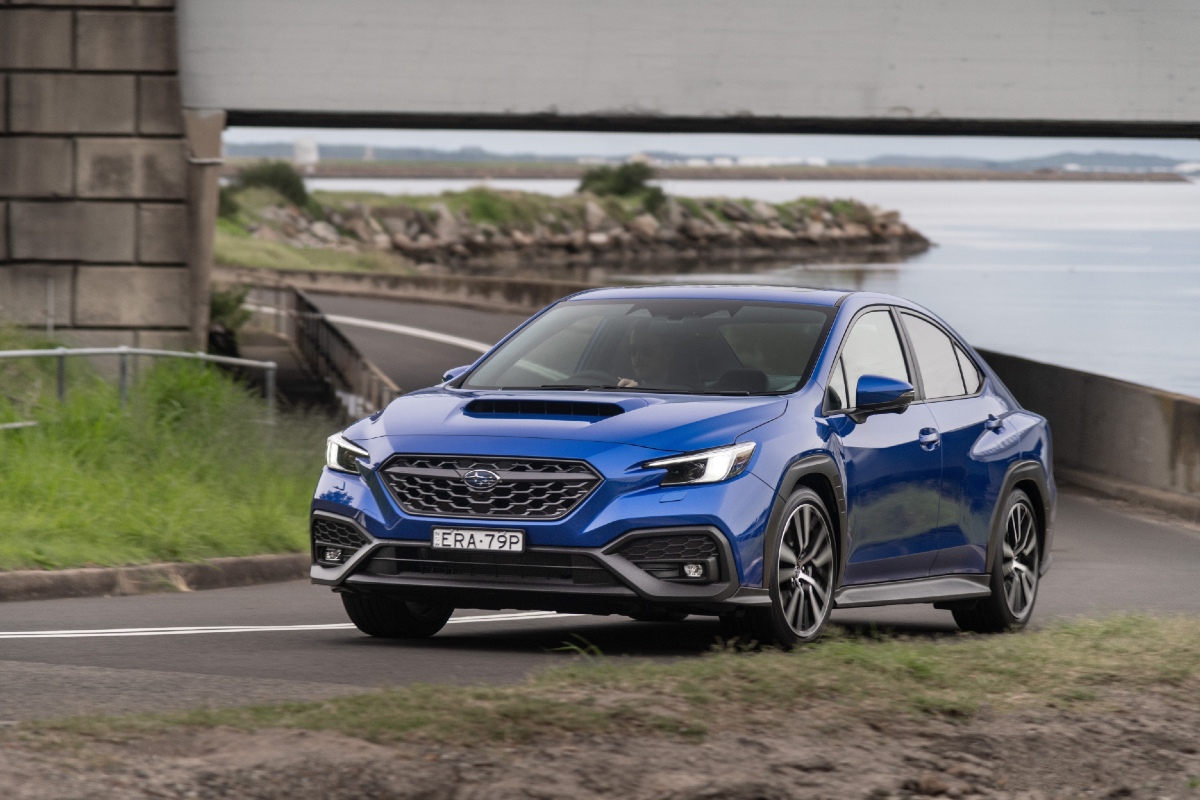 The clichéd answer would be a ‘rally stage’ but it feels like this WRX, particularly this tS model with the CVT, has moved on from that. Instead of feeling like a rally-car-for-the-road, this latest take on the WRX is better suited to a long, winding country drive.

It’s a much better long-distance machine now, thanks to its quieter cabin and more compliant ride. 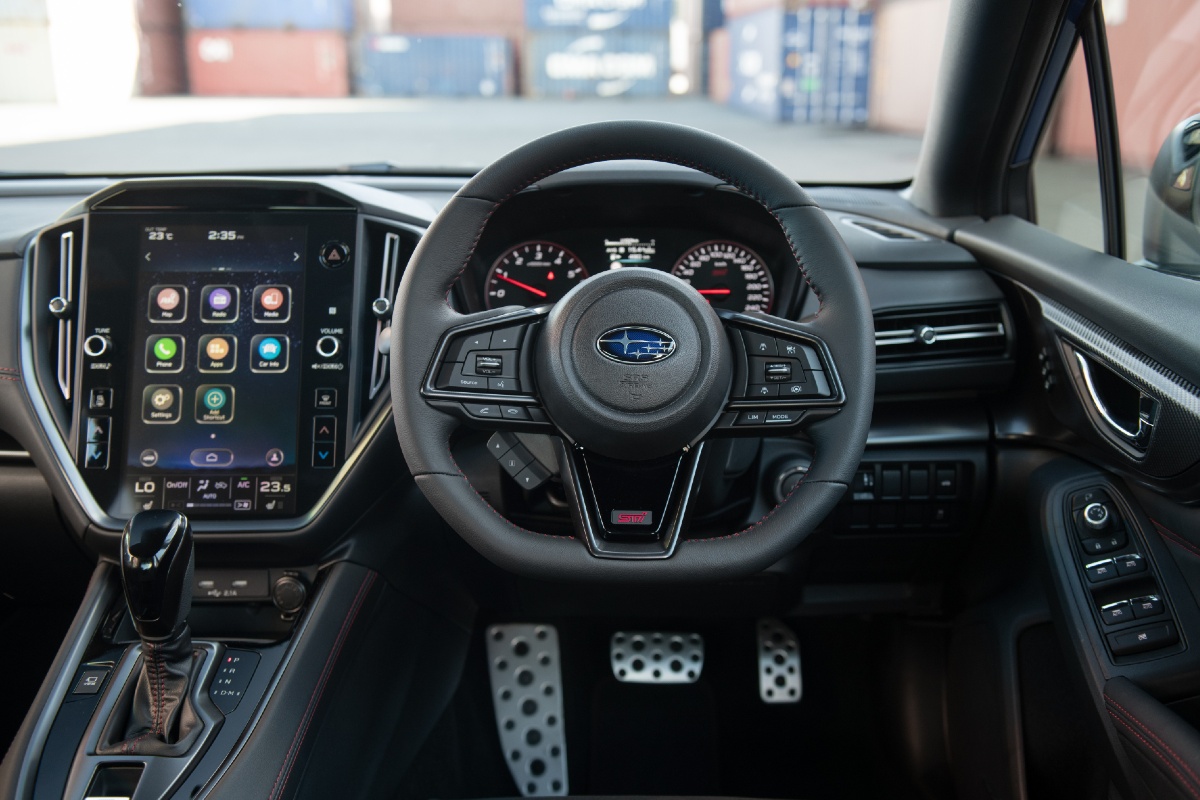 The cabin is a major leap forward from the previous model, introducing a more modern and sophisticated design. The obvious highlight is the huge 11.6-inch iPad-style touchscreen that dominates the centre fascia.

The tS model also gets some STI touches, like the thick-rimmed steering wheel that sits nicely in your hands. The sports seats are both supportive and comfortable, adding to the premium feeling.
However, for all this new luxury, for WRX die-hards this new model does feel a bit softer inside especially when it comes to the sporty elements that really define the car.

For example, it’s telling that the steering wheel features plenty of buttons for the infotainment system and the various active safety features but there’s no ‘Sport Mode’ button. Hyundai has two big blue ‘N’ buttons on the i30 N, BMW has ‘M’ buttons on its wheel but Subaru’s priorities seem to have shifted. Instead, the Drive Mode selection is done via the touchscreen, which makes it more difficult to do on the move and indicates its a lower priority for this latest model.

How much does the Subaru WRX cost?

The WRX range begins at $44,990 for the entry-level manual model, but we’re reviewing the range-topping four-door, the tS Sport which is priced from $56,990 (all prices exclude on-road costs).

It’s generously equipped for that price, specifically on the tS Sport, with all the usual creature comforts plus a raft of active safety features as part of the Subaru ‘EyeSight’ suite. 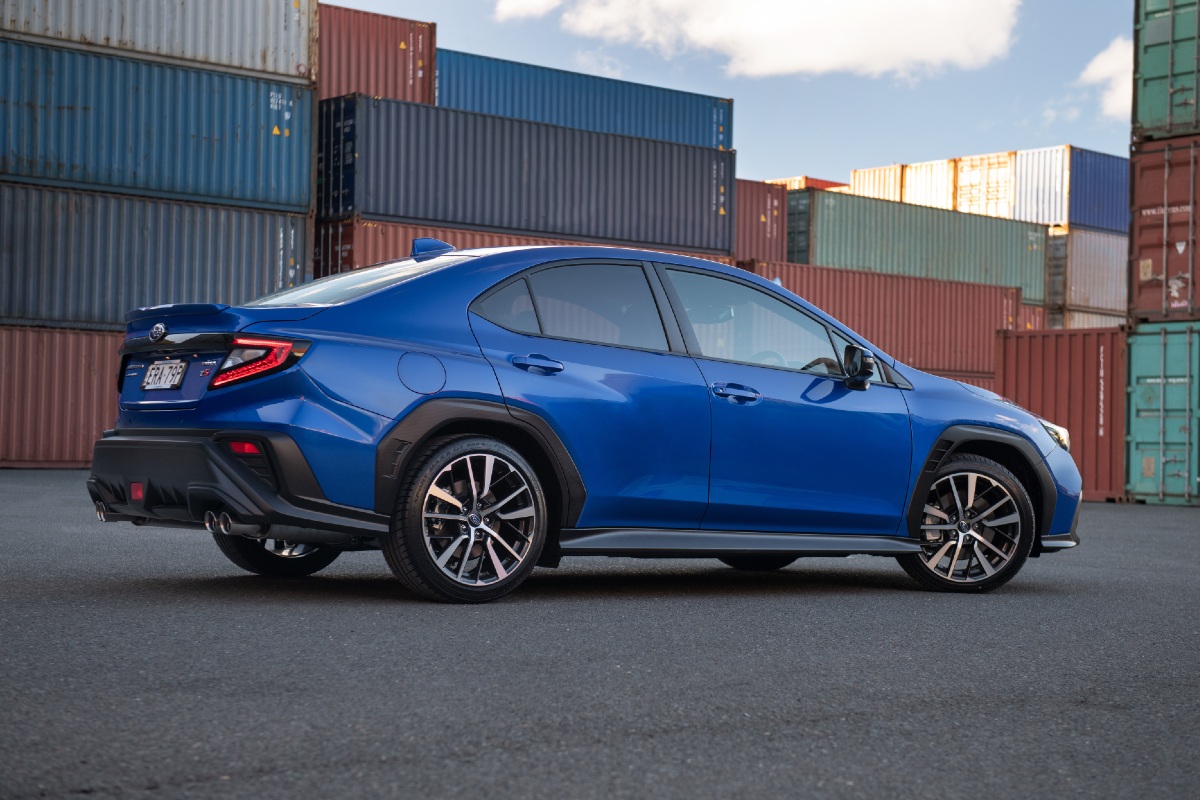 No, at least not the CVT model. We’ll reserve judgement on the manual WRX until we review it, but in isolation this automatic option wouldn’t be our pick. The CVT simply dulls the driving experience too much and reduces that ‘rally-bred’ feeling that has made the WRX such an iconic model for Subaru.

The flipside to all this, is that this new, more polished model might appeal to exactly the same people who bought the original WRX in their mid-20s back in the late ‘90s and early 2000s. Just like them, the WRX has grown into middle age and is now slightly softer but a more well-rounded proposition.