A driver’s SUV. Which, I know probably sounds like a contradictory idea to any driving purist, but Porsche’s take on a family-friendly SUV that is enjoyable on a twisty road manages to achieve both roles beautifully.

The GTS sits at the top of the current range, offering the most performance and sharpest handling, while still having the same amount of space and practical benefits as the rest of the Macan line-up.

Does the Porsche Macan GTS have any racing pedigree?

Porsche may have never raced the Macan but you can feel the influence of its performance cars throughout the car. GTS is the German brand’s designation for models designed to appeal to its drivers, so it has clearly taken lessons learnt on the racetrack and applied them to the handling of the Macan GTS. It may be an SUV but it feels taut and dynamic from the moment you start driving. Porsche only introduced this latest variant of the Macan GTS in 2020 but it has already been given some major upgrades for 2022.

It still has the same 2.9-litre twin-turbo V6 petrol engine but both power and torque have been significantly increased. It now makes 324kW of power and 550Nm of torque, compared to 280kW/520Nm previously.

One of the main reasons for this performance boost is the Macan S swaps its old 3.0-litre single-turbo V6 for the 2.9-litre twin-turbo V6, which makes the same 280kW/520Nm as the old GTS.

The engine is paired to a seven-speed dual-clutch automatic transmission. As we’ve written in our previous reviews of this gearbox, it’s probably the best example of a dual-clutch unit we’ve experienced. It’s smooth and quick shifting and without the hesitations and jerkiness that are often found in its competitors.

It’s a fantastic combination because it provides both drivability and performance. Around town the Macan GTS never feels restrained or lumpy, which is often a problem with such powerful engines because they don’t like just cruising, instead it does whatever is required without any fuss or bother.

When you do want more power it’s available, with the transmission quickly shuffling ratios to find the sweet spot in the rev band. And it’s ferocious power, delivered smoothly through the all-wheel drive system, but it can run 0-100km/h in just 4.3 seconds.

How does the Porsche Macan GTS handle? As impressive as the engine performance is, the real star of the show is the way the Macan GTS behaves when you point it at a series of challenging corners.

The rest of the Macan range uses steel springs, and the difference between the two is very noticeable, especially on a choppy back road. It offers more body control thanks to the work of the adaptive dampers, both only when cornering but they also settle the Macan more quickly over bumps.

The steering on the previous Macan GTS was already nicely weighted, direct and provided meaningful feedback to the driver. But that didn’t stop Porsche’s engineers from fine-tuning it even more, so it feels as good as any steering you’ll find in an SUV.

The braking has been improved too, with the 390mm front and 356mm rear rotors coated with tungsten carbide which Porsche claims improves both stopping performance but also reduces the amount of brake dust that is generated.

The beauty of the Macan GTS is it’s the kind of vehicle you’re just happy to drive anywhere. It’s just as impressive and capable on the school run as it is tackling the challenging rural roads we pushed it to its limits on.

What’s the interior of the Porsche Macan GTS like? 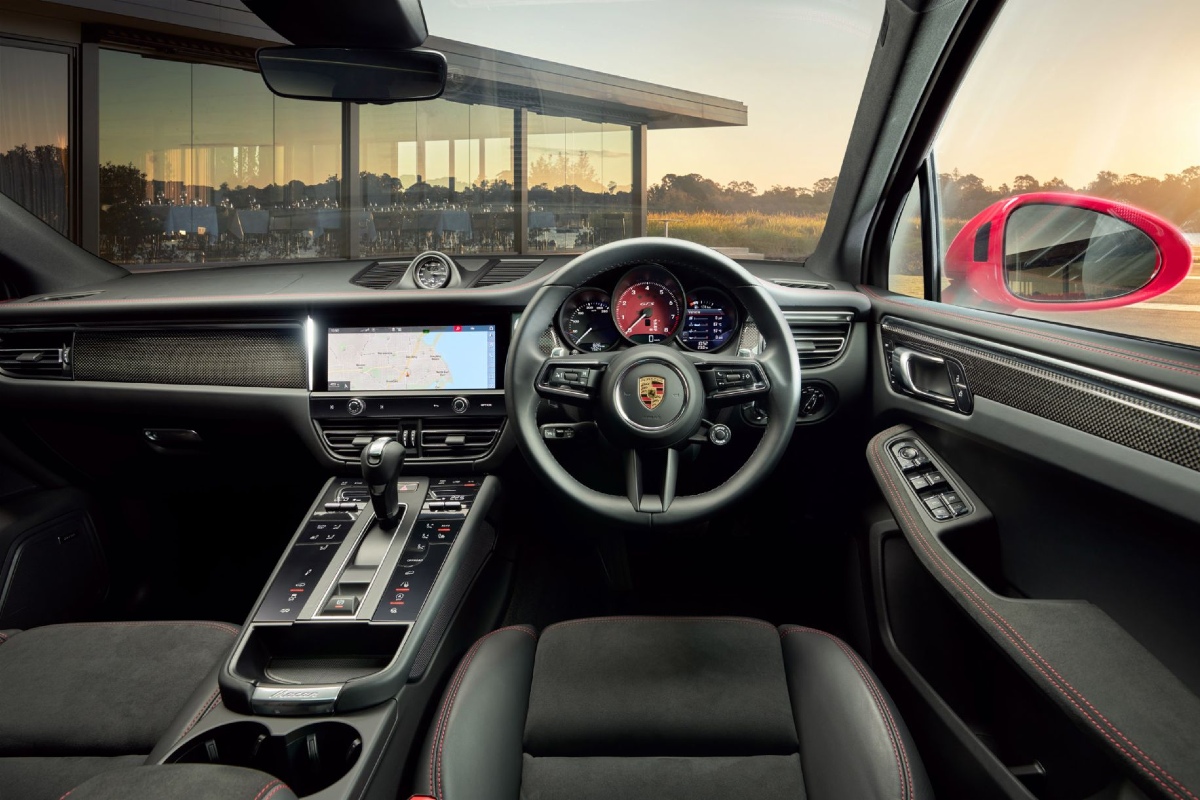 The pre-facelifted Macan was a great blend of practical SUV and stylish sports car, with plenty of room but obvious elements borrowed from the 911 and 718 sports cars.

Porsche didn’t leave it alone though and made some significant changes, with the most obvious being the centre console switchgear. It’s no longer physical buttons and is now instead touch-sensitive surfaces.

It may sound like a relatively minor change but it actually makes a big difference, because previously the sheer volume of buttons was an area of criticism. This new look is much cleaner and more premium.

As for space and comfort, the front seats are not only comfy but are great to look at trimmed in leather and Alcantara. The second row offers respectable space for teenagers and even smaller adults, while the boot is a roomy 488-litres.

How much does the Porsche Macan GTS cost?

These upgrades do come at a cost, with the Macan GTS now costing $129,800 (plus on-road costs), which is a $17,500 increase. Even for people looking at buying a Porsche that’s not an insignificant amount of money.

Especially when the Macan S, which has the same engine as the out-going GTS, is priced at $105,800. As a parent who cares about the driving experience of any car I get behind the wheel of the Macan GTS is a car I’d make a permanent addition to my garage in a heartbeat. It’s got a fantastic blend of practicality and performance that makes it a pleasure to drive in virtually any circumstance.