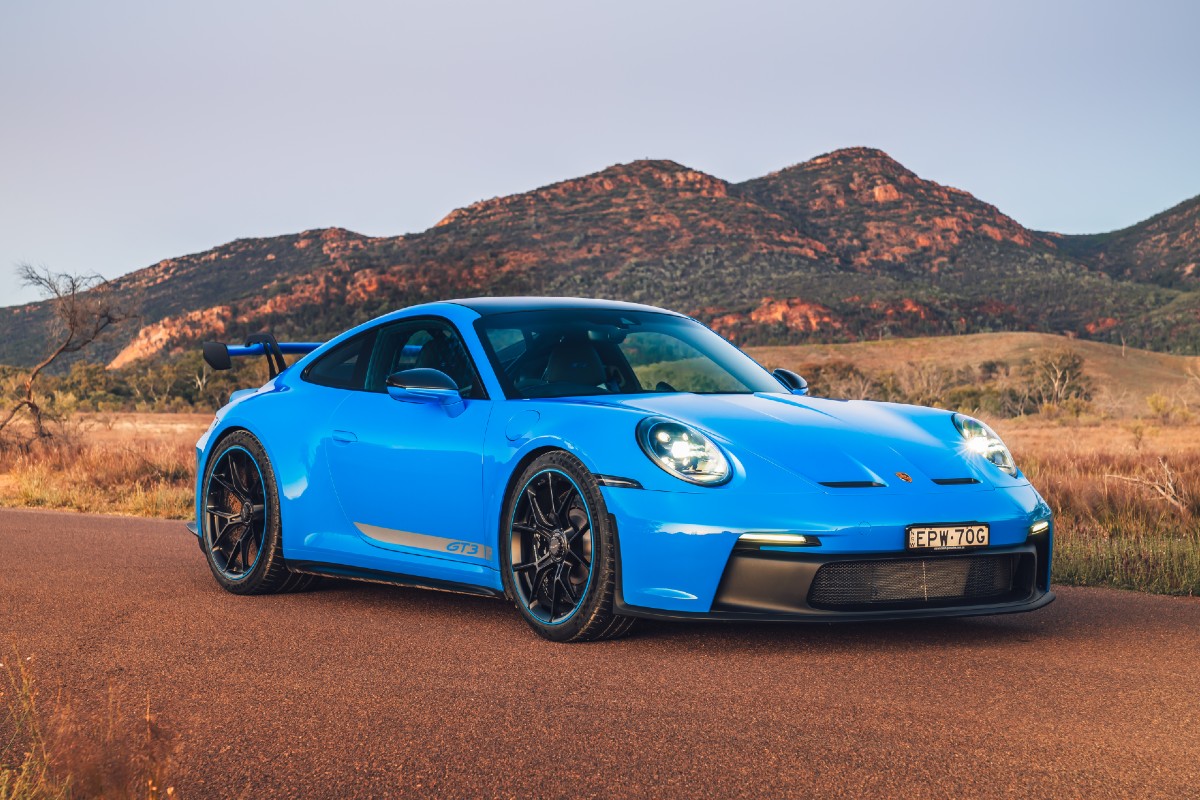 The closest thing to a road-going race car you can buy today. That’s not hyperbole either, this 992-generation is so quick on a racetrack – even on road-legal tyres – that Porsche’s chief driving instructor, Luke Youlden, says he references the same braking markers as a Carrera Cup car on the track.

We’ve already given it a Track Test and confirmed for ourselves that this is a remarkably quick and competent car on a circuit, but it’s a road car primarily so we needed to see how it measures up in the real world.

The liveable nature of the previous 991-generation 911 GT3 was one of its greatest strengths, because it was a car that was as at home on the road as it was on the track. This new model is significantly more capable on the track now and that has had an impact on its road car credentials. 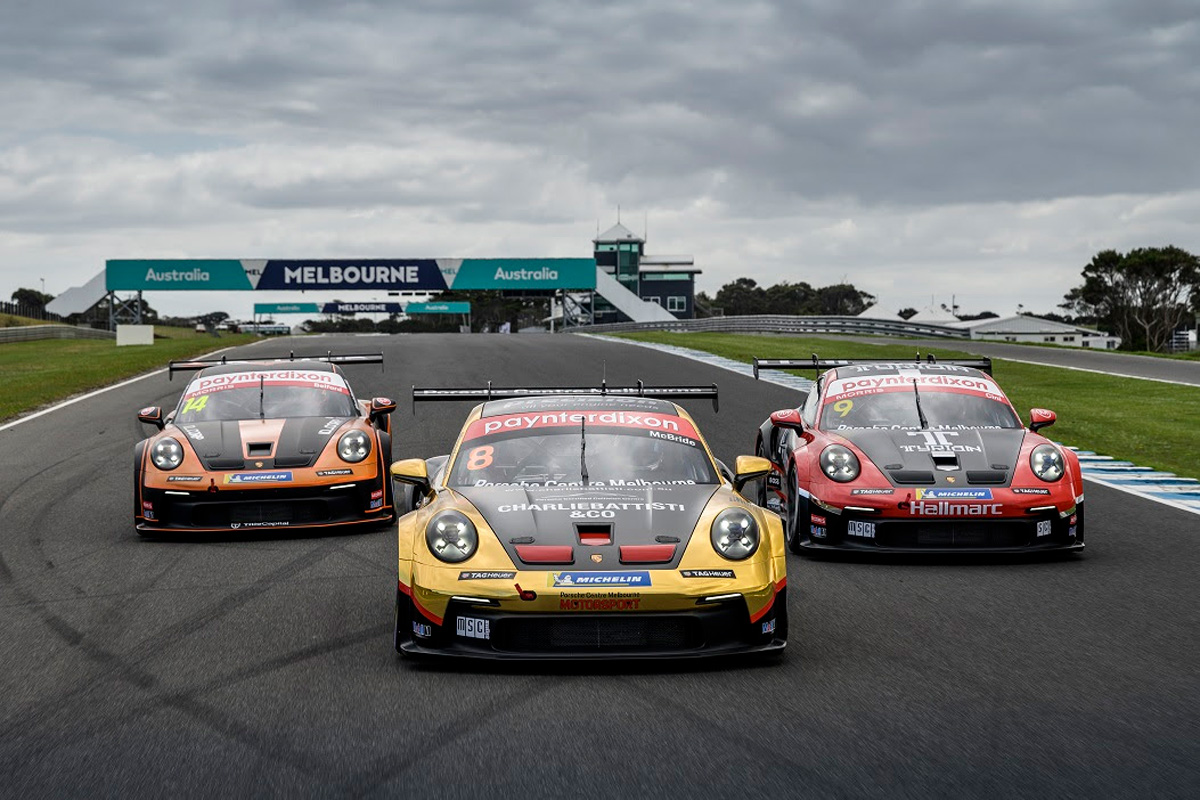 It has as much motorsport pedigree as any car on the road. The GT3 has long been developed side-by-side with the Carrera Cup and GT3-class models and this 992 version is the most race-connected version yet.

From the engine to the aerodynamics every inch of this new GT3 is tuned for maximum performance with lessons learnt on racetracks around the world. In particular the suspension layout, double-wishbones at the front, is a direct transfer from the Le Mans GTE class-winning 911 RSR and a first for a road-going 911. 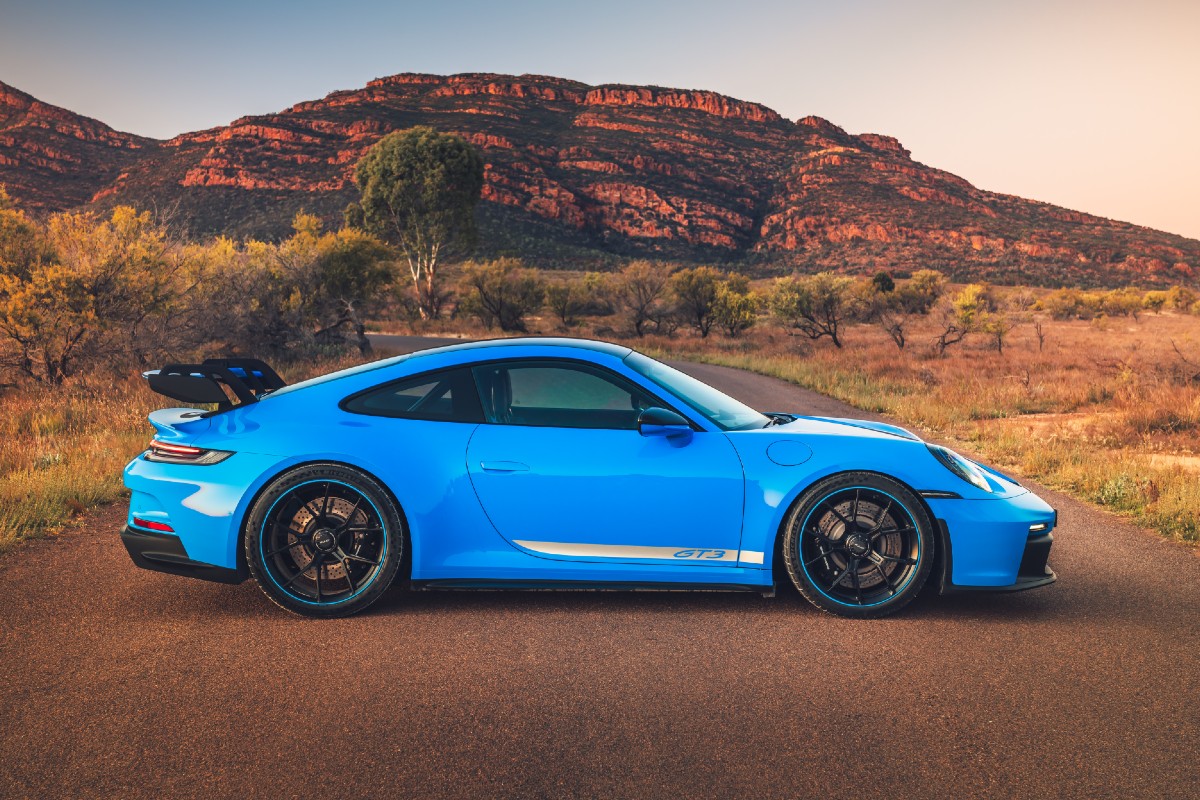 Porsche’s last naturally-aspirated flat-six. This 4.0-litre boxer engine does service in a variety of 911 and 718 models these days but even so the way it has been tuned for the GT3 makes it feel special.

In this instance it makes 375kW of power at a screaming 8400rpm and 460Nm of torque at 6100rpm, but if you keep your foot buried it has the ability to rev all the way to 9000rpm and make the most glorious mechanical sound as it does so.

It’s easy to understand why Porsche is pouring tens of millions of Euros into the development on carbon neutral synthetic fuel to try and save the internal combustion engine. An electric 911 might be faster and more efficient but it will never sound as good as this mechanical masterpiece.

The problem with this engine on the road, is to extract the best sounds you need to drive it quite hard and because it’s so powerful you end up going quite quickly. It also doesn’t really enjoy just puttering along in traffic either, it will do it but it feels like a wild animal on a leash that just wants to run free.

However, when you do find some open road and allow it to run free it comes alive. At its best this engine is truly remarkable. It may not be the most powerful engine on the market (in fact it’s far from it) but it has such great flexibility and driveability when you push it hard that it feels as quick as anything on the road.

One aspect that helps it on the road is the seven-speed dual-clutch transmission that was fitted to our test car (and there’s a six-speed manual available if you’re a purist). The transmission does a great job of getting the best out of the engine, either when you’re just commuting or if you’re pushing hard on a twisty road. It has rapid-fire shifts on the go and the broad spread of ratios takes advantage of the broader torque curve. As mentioned earlier, Porsche really pushed the limits on the handling package for the new GT3, introducing a raft of elements designed to improve its on-track performance. These include the aforementioned double-wishbone front suspension, the outrageous aero kit that includes a swan-neck adjustable rear wing and a huge tyre footprint (255/35 ZR20 fronts and 315/30 ZR21 rears).

However, once again the focus on on-track performance does take away from the handling on the road. Like the engine the chassis is immensely capable, so much so that it feels restrained on the road.

While the suspension is firm, that’s understandable and acceptable given the nature of the GT3 and the quality of Australian roads. It feels busy much of the time but never crashy or uncomfortable.

However, the decision to fit Michelin Pilot Sport Cup 2 tyres is another on-road compromise that does make the GT3 difficult to live with at times. These are excellent track tyres, providing superior grip than even the excellent Pilot Sport 4S hoops, but they aren’t really designed for driving in the rain on the road.

Given the very wet summer the east coast of Australia had, unsurprisingly much of our test was conducted on slippery roads and several times the tyres struggled for grip, even on modest throttle and despite their size. It’s hardly a deal-breaker but it does mean you need to be cautious when the road is slippery.

Having said all that… when you do find an stretch of dry, snaking open road the GT3 comes alive. It feels incredibly capable with its awesome chassis response and immense grip it allows you to push yourself and the car to its limits. It may feel restrained around town, but once you let it off the leash it runs majestically.

Having experienced this latest 911 GT3 on both the road and track the answer is obvious. It would be the car you chose to tackle any of the world’s best circuits – Nurburgring, Mt Panorama, Suzuka or Elkhart Lake. It has power, poise and precision that makes it fantastically engaging to drive.

But, equally, if you find a challenging piece of road, like the Old Pacific Highway or the Great Alpine Way, the GT3 would excel there too. It’s the ultimate driver’s car. 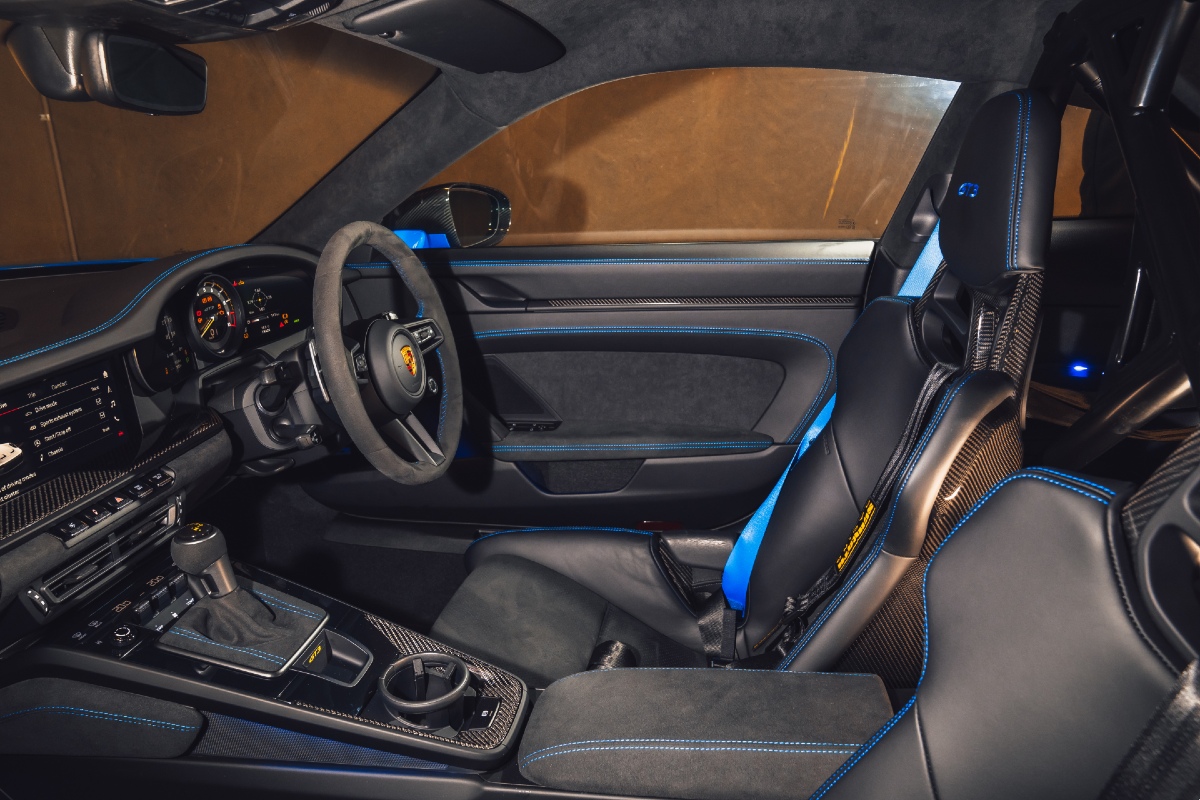 Purposeful is the word that immediately springs to mind. Our test car was fitted with the (no-cost) optional Clubsport Package which adds a half-roll cage, racing-style bucket seats and multi-point harnesses, so it really rammed home the ‘racing car for the road’ image of the GT3.

However, beyond those extras the design of the GT3 sends a clear message that it means business but with Porsche’s typical attention to detail. There’s plenty of suede and carbon fibre around the cabin and contrasting stitching to make you feel like you’re in something properly special.

The steering wheel features Porsche’s drive mode dial for the first time in the GT3, allowing you to switch between the GT3’s three driving modes – Normal, Sport and Track. The rest of the controls are the same as you find in the rest of the 911 range, so it’s a very user friendly sports car.

It’s all a moot point though, because Porsche Australia’s allocation for the 911 GT3 was sold out before the car even arrived, so if you want one you’ll have to try and find an owner willing to part with theirs – and that will likely mean paying well over the list price. 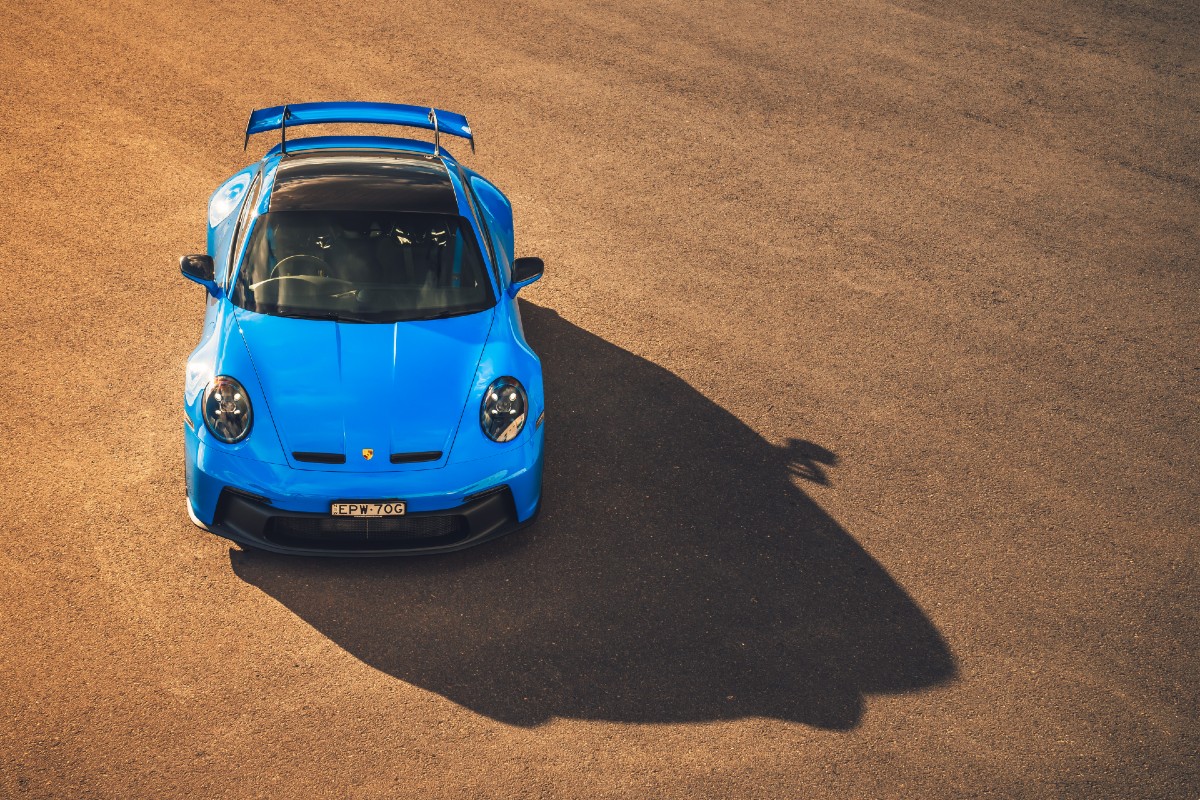 Yes, but only if I intended to do regular track days. That’s because the track is when this 911 GT3 is at its best and as a road car it has too many compromises to make it your daily driver.

In some ways that’s disappointing, because the previous generation GT3 had that duality of purpose – liveable on the road but thrilling on the track. But in another way it makes perfect sense that Porsche has pushed the limits of the Gt3 even higher.

For starters, it’s what customers wanted because Porsche has a highly engaged and active group of track drivers amongst its owners. And it also has a wide range of alternative 911s that can do a better job of being a road car and still being engaging on the circuit – even the entry-grade 911 Carrera can do that and the 911 GTS is the ultimate iteration.

Ultimately this latest GT3 isn’t the nicest 911 to drive on the street but you can’t help but love it regardless because of what it’s capable of at its limit.