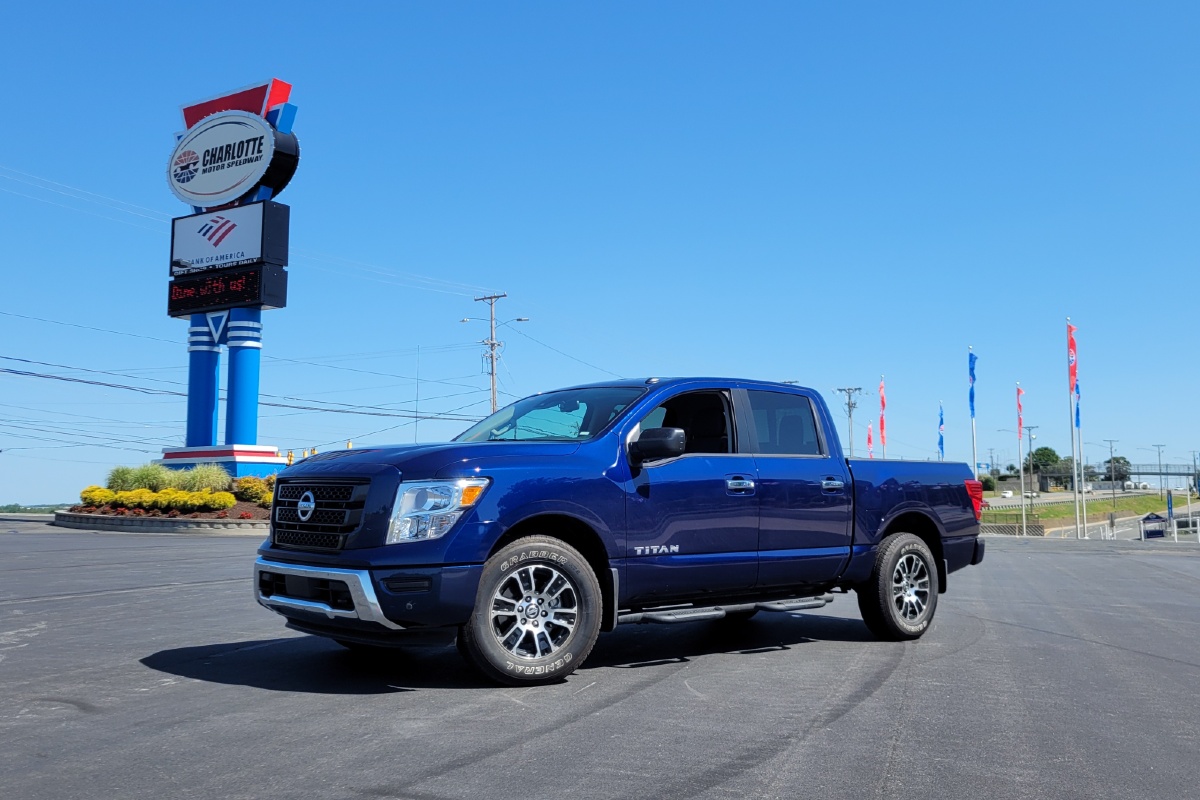 Nissan’s biggest ute and its answer to America’s most popular automotive trio – the Ford F-150, Ram 1500 and Chevrolet Silverado 1500. The Titan is bigger than the Navara that’s sold here as well as its US sibling, the Frontier.

Unfortunately the Titan isn’t currently available in Australia in an official Nissan capacity, but on a recent trip to the USA we were able to sample a Titan for a few days to get a taste for it. Full disclosure, we rented the Titan so Nissan had no direct involvement in its preparation, but the model we drove had approximately 8000km on the odometer and was in representative condition to what owners should expect.

While Nissan Australia has no plans to begin importing the Titan anytime soon, given the increasing popularity of the Ram 1500 and Chevy Silverado – as well as the impending arrival of the F-150 in 2023 – it does raise the question over whether the company should strongly consider it for Australian buyers. Obviously its a very large ute, so hardly a racing car, so surprisingly there are some strong racing links to the Titan. For starters, Nissan USA has a strong heritage in off-road racing in the desert and on short course dirt tracks. While more common with the Navara-sized Frontier, the off-road racing is what led to the development of the sporty PRO-4X variant.

Also, the engine that powers the Titan is the same V8 that was used as the basis for both the Altima in Supercars and the GT-R in the short-lived GT1 sports car class. The engine is a 5.6-litre V8 that has served Nissan well over a long period. Aside from its racing use, Nissan has also deployed it in the Patrol, Armada, Frontier and a range of Infiniti models.

In the Titan it pumps out 298kW of power and 560Nm of torque which is more than enough grunt to move this mammoth pickup with ease. When you put your foot down the Titan surges forward with a surprising amount of speed.

It may be a big truck but the big engine makes it feel smaller. It’s also great for just cruising around town or down the highway, as the engine can just tick along at relatively low revs and relying on all that torque to keep you rolling.

It’s helped by the nine-speed automatic transmission that does a good job of finding the sweet spot for the engine depending on the circumstances. It can take a moment to shuffle down to a lower ratio when you need a burst of acceleration, but the V8 compensates for the hesitation by punching hard.

The downside of this big, powerful engine in such a large vehicle is typically the fuel economy. However, Nissan’s official combined cycle claim for the Titan is 13.0-litres per 100km, which is hardly miserly but is respectable for such a big machine. During our test drive, which included several large highway stretches we saw 12.2L/100km from the car, which is a decent return given the combination of power and size. Obviously with more urban driving or if you were towing you could expect that number to rise significantly. 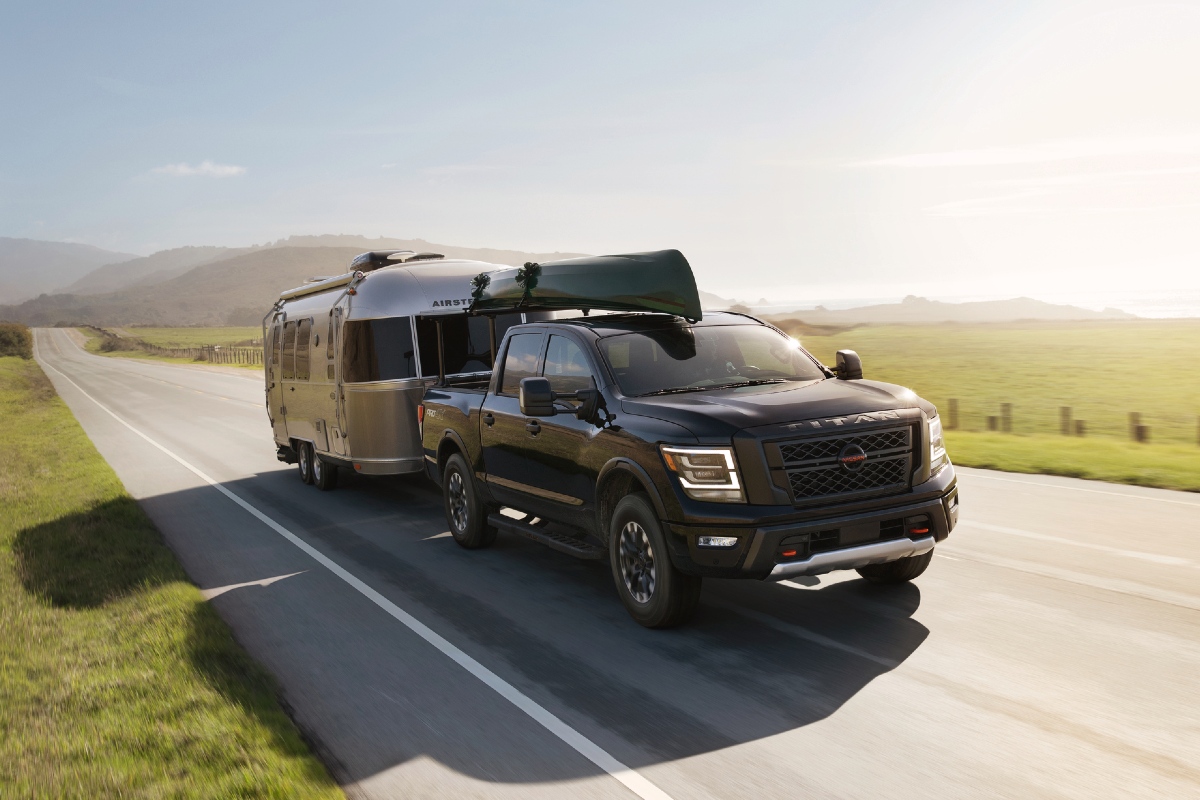 The Titan was our chariot for a journey into ‘NASCAR country’ taking us from Charlotte, North Carolina to Darlington, South Carolina and back again. This meant several hours behind the wheel through both the urban sprawl of Charlotte but also the open road to the track at Darlington.

Around town the sheer size of the Titan does take a few minutes to get used to. This beast measures 5.7m long and 2m wide, which may not sound a lot bigger than the 5.3m long and 1.9m wide Navara but feels it when you’re behind the wheel.

Once you are comfortable with it though, the Titan is a breeze to live with. The high set cabin gives you a commanding view of the road, even amid the plethora of other pickups and SUVs that dominate roads in the Carolinas, so it’s easy to understand why these types of utes are popular in the US.

The steering is direct and accurate for a ute of this size and the ride was well managed (especially considering we had no load in the tray) so you can manoeuvre it with confidence.

In terms of its capabilities, the Titan is rated to a maximum towing capacity of 4200kg and can only take 725kg in the tray, which isn’t much better than the Navara despite its extra size (which might explain Nissan Australia’s hesitancy to bring it here as it doesn’t offer significantly more in this key department).

In Australia. While it’s certainly a sizeable vehicle, the Titan would feel at home on local roads. It obviously has appeal as a heavy-duty workhorse, but equally there seems to be a growing market for these US-designed pickups that just like the size, style and space they offer. Not surprisingly there’s plenty of space inside such a large pickup. We drove the ‘Crew Cab’ variant which offered four full-size doors and two rows of seats inside with comfortable space for five adults.

The design and presentation of the Titan is on brand with the rest of the Nissan range. The styling and technology is very similar to what you’ll find in a Patrol, so given its success locally there’s no reason to think Australian buyers wouldn’t embrace it.

There are some differences though, like the old-school column-mounted shifter and foot-operated park brakes. Naturally given its size and the US audience, there are plenty of cup-holders and other storage options.

How much does the Nissan Titan cost?

In the US the Titan Crew Cab range starts at US$38,310 for the entry-level King Cab S, which at current exchange rates converts to approximately $54,000. The mid-range Crew Cab SV we drove is priced at US$43,560, approximately $62,000. It extends all the way up to roughly $85,000 for the range-topping Crew Cab Platinum Reserve model.

Obviously, to get the Titan to Australia it would need to be converted to right-hand drive which would add significant cost, as would local taxes and other charges, so it would likely end up with a higher asking price than the direct financial conversion. 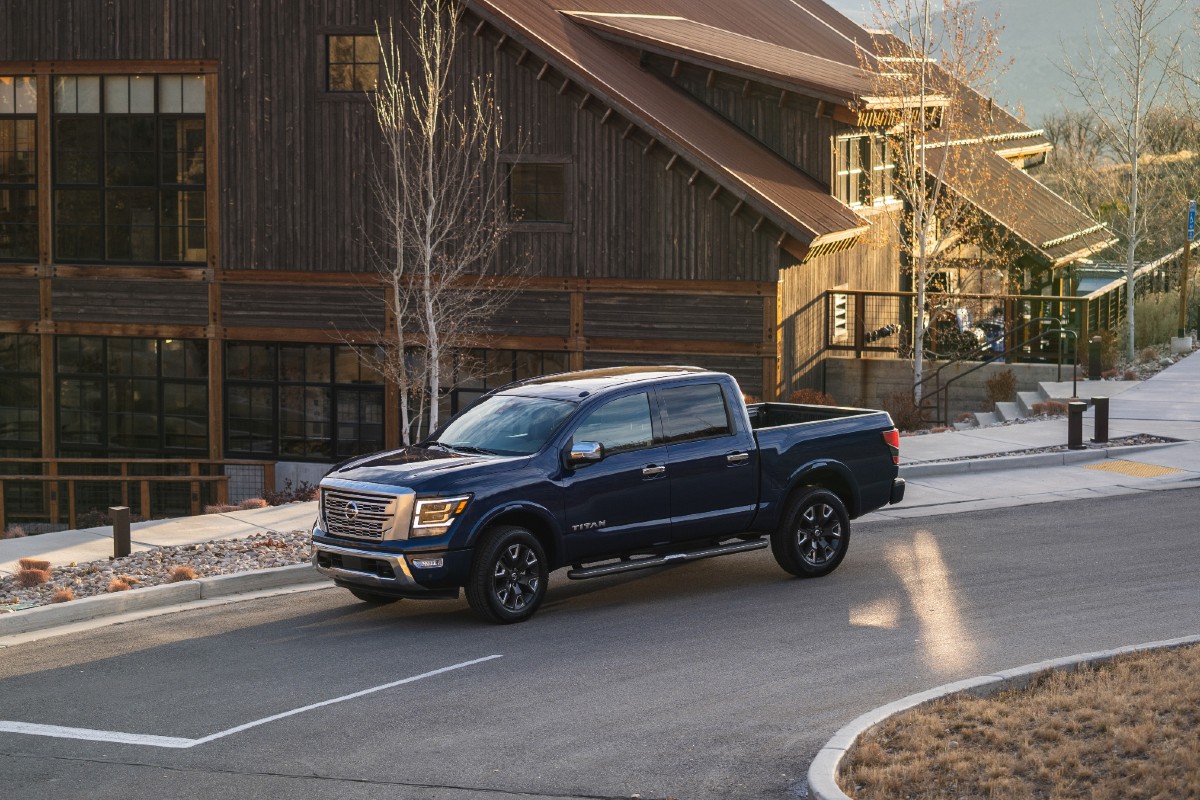 If Nissan made the Titan available in Australia it would certainly be on my shopping list. While it’s obviously designed for the US market the success of the Ram and Chevrolet equivalents down under show what a strong market there is for these types of full-size utes/pickups here.

And after driving the Titan it’s easy to understand why. The appeal isn’t so much in the capability, given how similar a Navara performs in that department, but in the size and scale these US pickups bring.

Especially when powered by such a grunty V8 engine, the Titan is a quick and capable, family-friendly but also an adventure-capable vehicle.