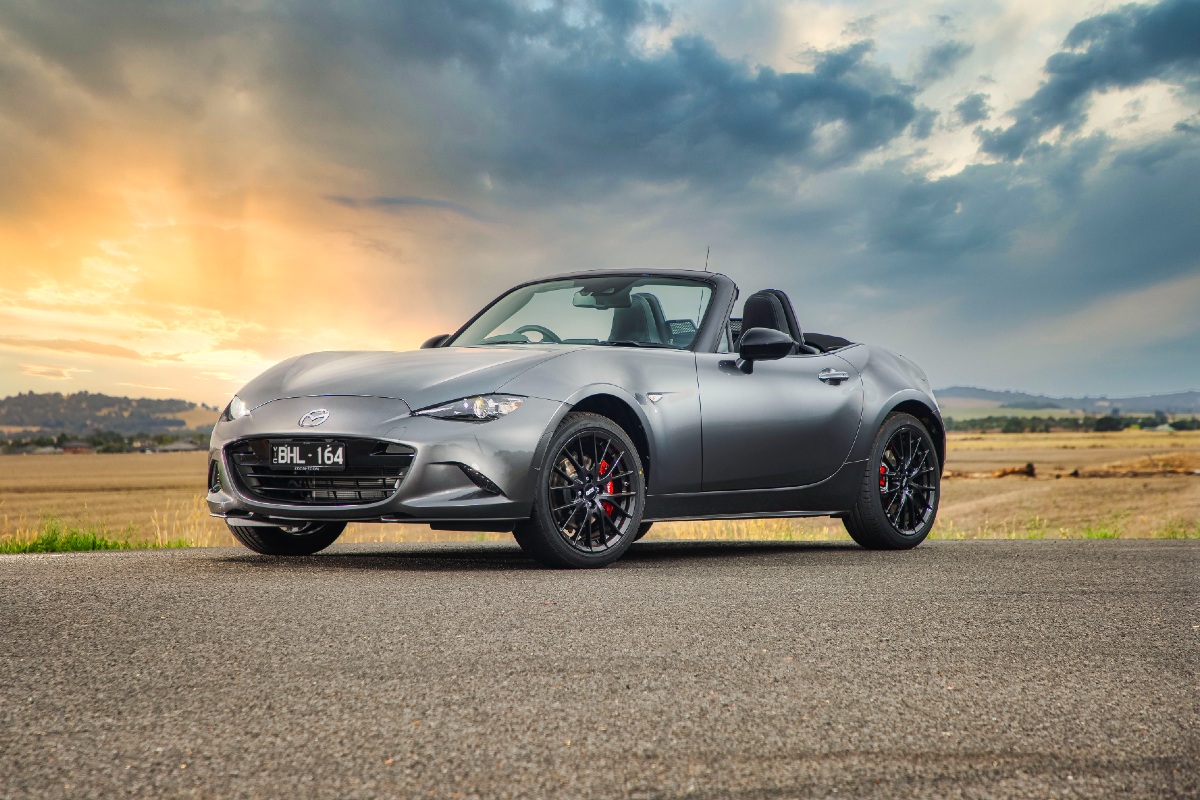 In many respects the Mazda MX-5 is a retro car, not in its style and technology, but its character. This is the closest we get in 2022 to those popular and memorable British roadsters of the 1960s – like the Lotus Elan and MGB.

It’s compact, focuses on lightness and handling over brute power and is more about driving thrills than lap times.

For 2022 Mazda introduced an updated model, with the biggest new addition called Kinematic Posture Control (KPC). This is a new suspension technology that has been integrated across the range to improve its already excellent handling. 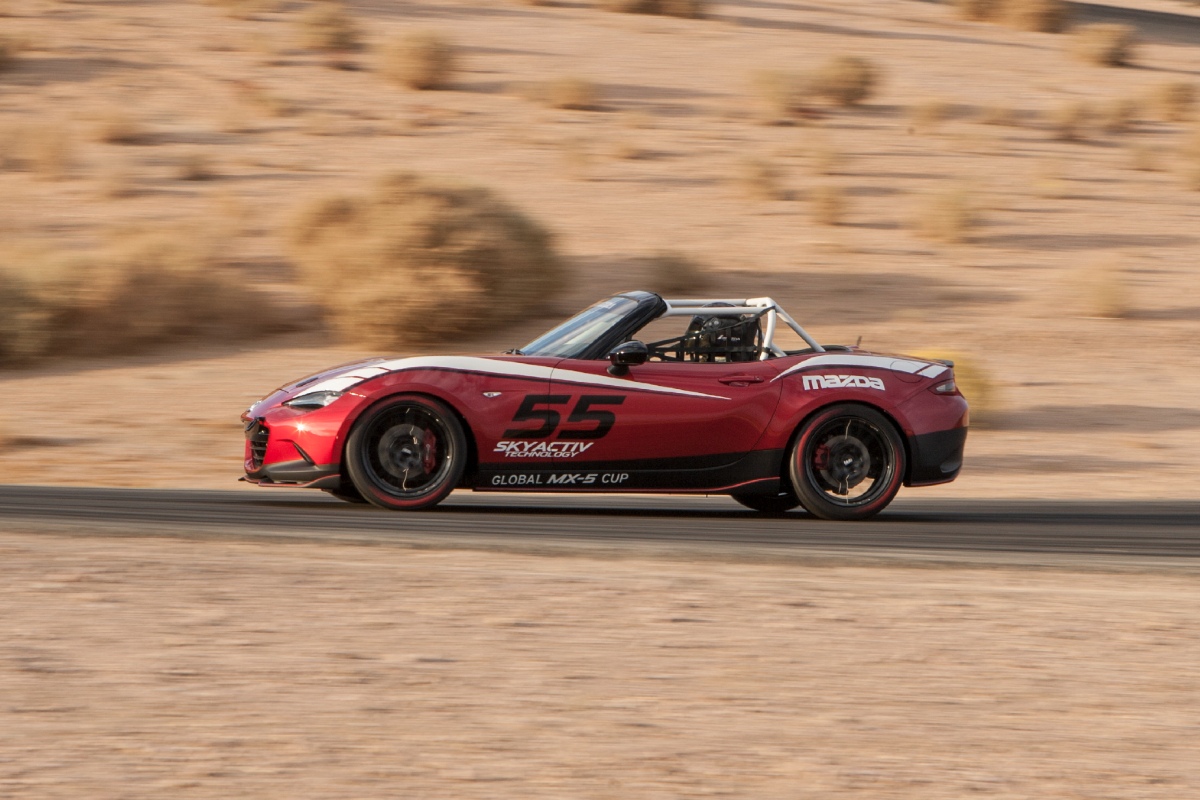 Yes, the MX-5 is Mazda’s primary motorsport vehicle ever since it dropped out of the IMSA Daytona Prototype category. The MX-5 Cup is a popular racing series in multiple countries around the world, with the car providing the ideal platform for close racing that puts the onus on the driver’s skill. 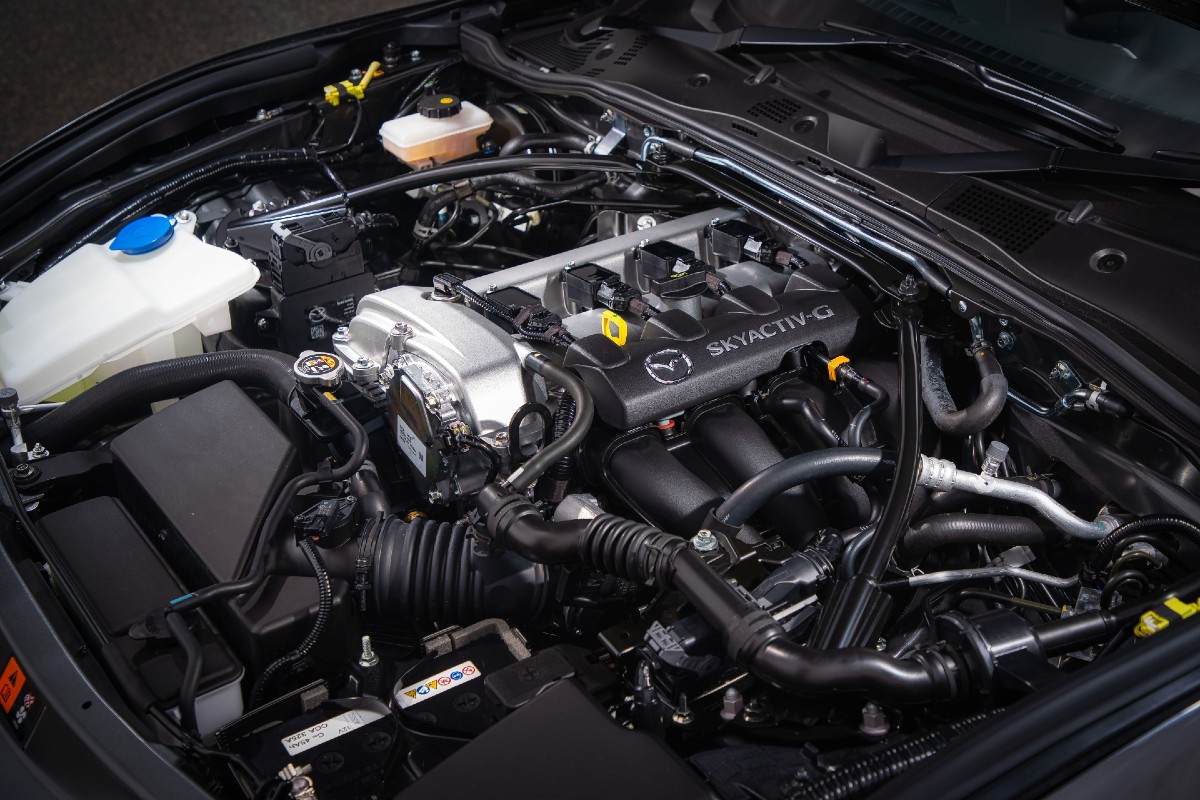 Another major change for the ‘22 model is Mazda Australia’s decision to drop the previously-available 1.5-litre four-cylinder engine. Instead, all models are now powered by the 2.0-litre ‘Skyactiv-G’ engine, a four-cylinder, naturally-aspirated petrol engine that makes 135kW of power and 205Nm of torque.

If that doesn’t sound like a lot of power, you’re right, but Mazda has paid close attention to how much the MX-5 weighs, so it tips the scales at just 1058kg which means it doesn’t really need a big engine. This fourth generation MX-5 weighs less than 100kg more than the original model that came out back in 1989 and is now a much safer model with more features so you have to applaud the engines for not letting this little roadster get bloated.

The result of this modest power and weight combination is a car that you can really push to its limits on the road without fear of losing your licence. Unlike so many modern cars that punch out huge horsepower numbers and need a racetrack to get the best from them, the MX-5 is a fantastic car on a twisty section of country road. 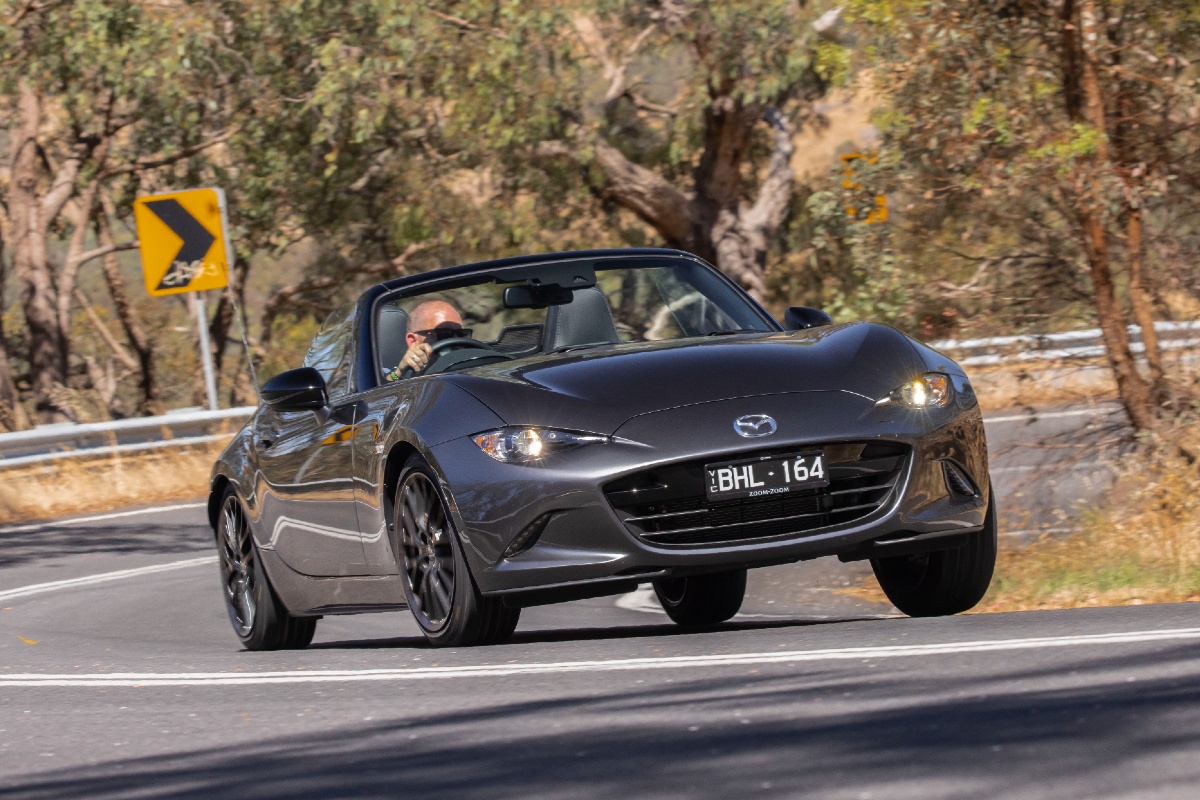 The addition of KPC was a concern to this reviewer, as the pre-updated MX-5 was a great handling car with a unique driving character. That’s because to get the right balance of handling and comfort Mazda opted for a softly sprung car which rolled noticeably in the corners.

It took some adjustment in this era of adaptive dampers that are able to provide a firmer, flatter ride, but it made the MX-5 feel special and was loads of fun.

Which is why Mazda developed KPC, which the company claims is “designed to generate an ‘anti-lift’ force that pulls the vehicle’s body down when the brakes are applied.” Or, to put it another way, it’s designed to stop so much body roll.

The good news is it manages to do that without making the MX-5 feel too ‘same, same’ with so many modern sports cars. It still has a fun, lively and playful driving character that makes it a joy to jump behind the wheel of. 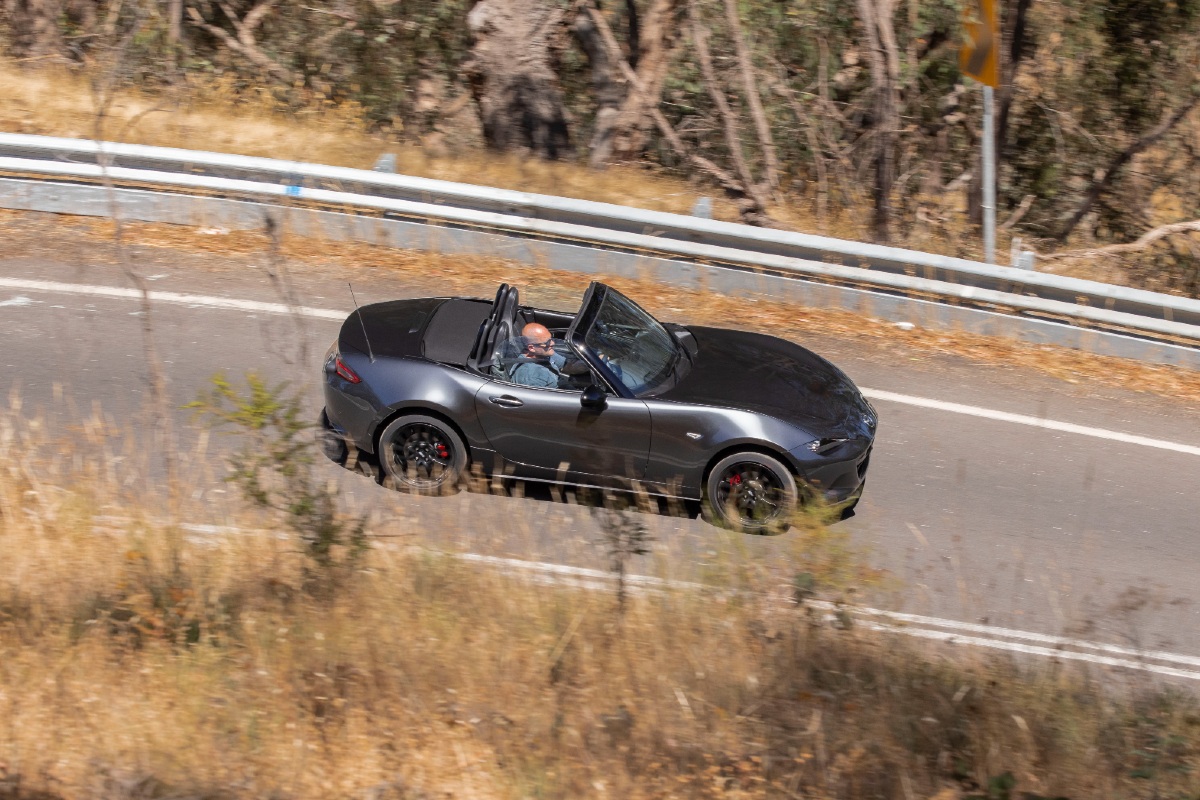 Forget the racetrack, this is a roadster built for the road. A twisty road through scenic views, so you can take the top down and enjoy the sun on your face and the wind in your hair.

That may sound cliched, like a 1960s advertisement, but that’s because the MX-5 is a car that tends to lean into the cliche of a ‘60s convertible because it harks back to those days of ‘carefree’ motoring – and is all the better for it. 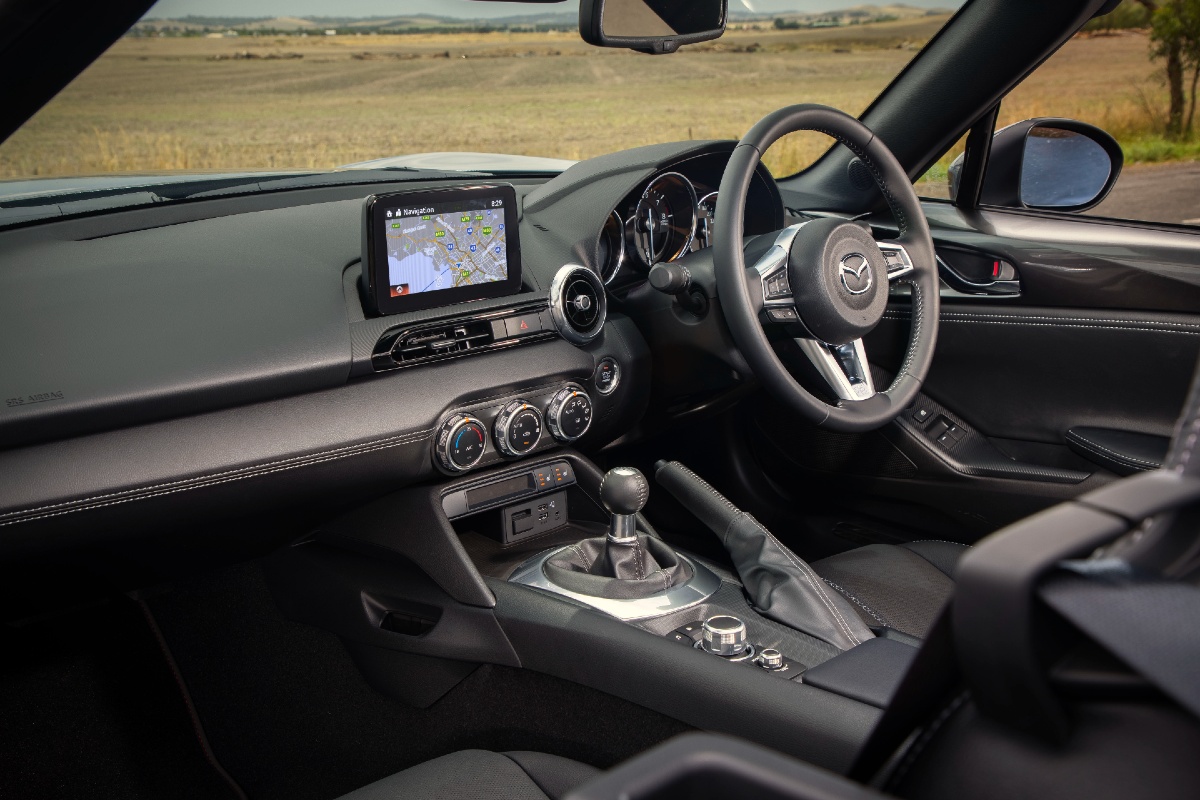 It’s nice enough but it’s also started to look a little dated when compared to newer models in the Mazda range. It again has that simple, no-frills but well designed and executed feel to it as the rest of the car, but the infotainment screen is small (only 7.0-inches) and only works when the car is stationary; when you’re moving you need to use the rotary dial in the centre console.

But overall it has all the important things covered – supportive seats, nice steering wheel and a short-throw gear lever – so the cabin is far from a deal-breaker.

How much does the Mazda MX-5 cost? 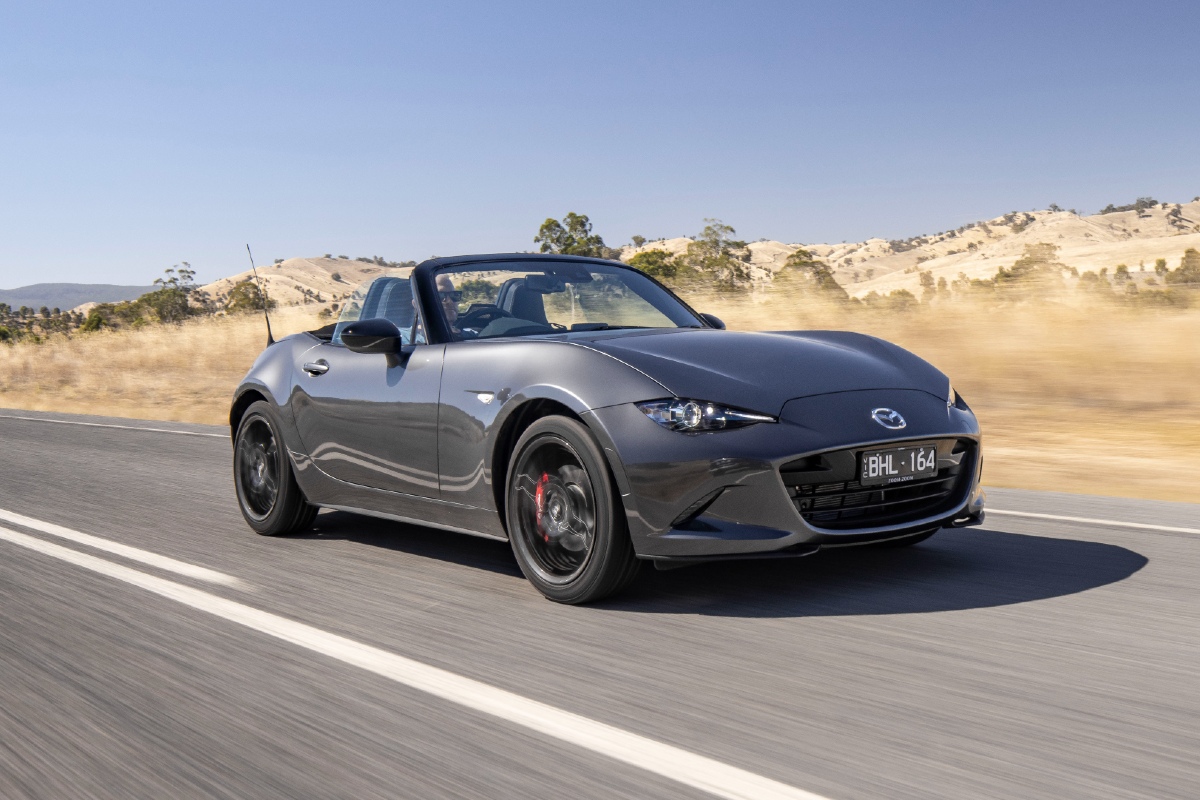 We drove the MX-5 GT RS Roadster which is priced from $47,320 (plus on-road costs) which puts it in the upper echelon of the current range.

With the decision to cut the 1.5-litre model the range now begins at $37,690 for the Roadster with the manual transmission and stretches all the way to $51,420 for the folding-hardtop RF GT with the automatic and black roof. 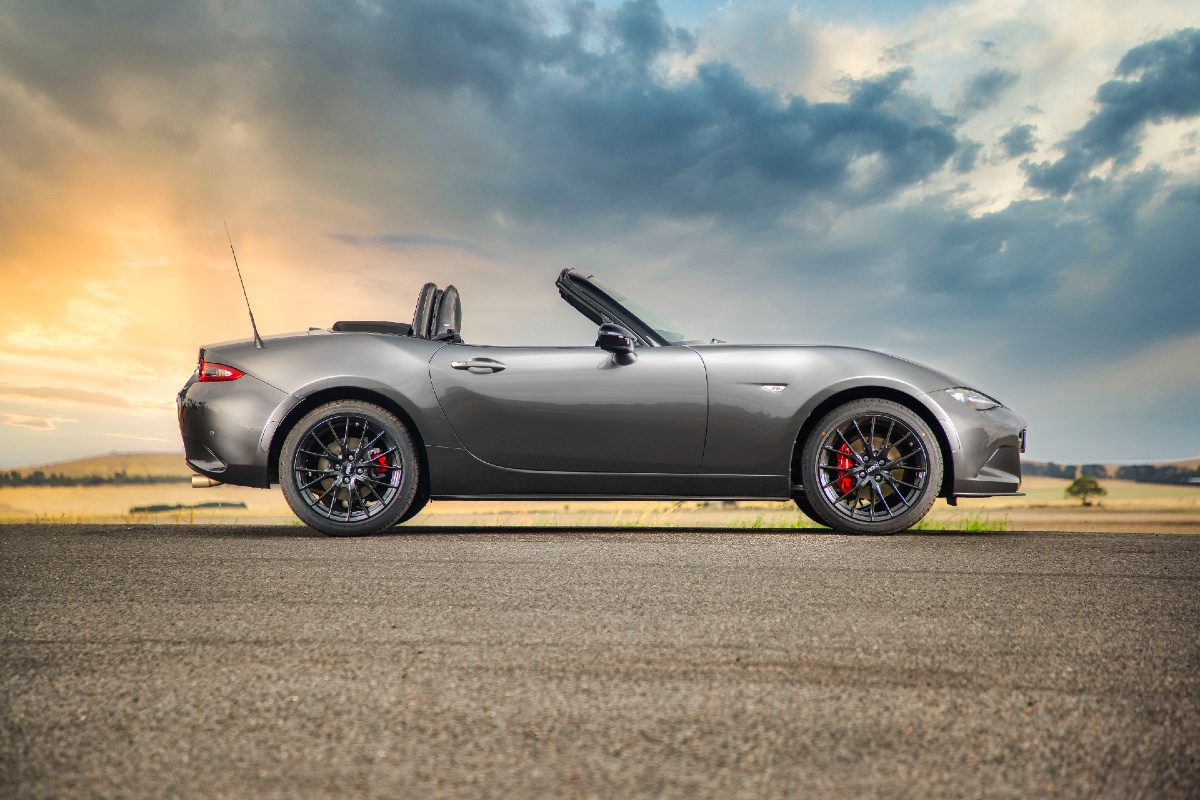 Most definitely. The MX-5 bucks the modern trend for more power, more weight and more technology (KPC not withstanding) and as a result is one of the most engaging and enjoyable cars on sale today.

It’s obviously not designed for the nine-to-five grind or doing the school run, it’s a weekend car designed to allow you to reconnect with the purity of driving.