A modern take on a station wagon, which is to say it’s more focused on looking good rather than being practical.

Genesis, Hyundai’s luxury brand, is beginning to establish itself in Australia. The addition of the GV70 and GV80 SUVs alongside the G70 and G80 sedans has seen steady sales growth, but the brand was clearly looking to do more.

The addition of the G70 Shooting Brake isn’t likely to trigger a sales spike, but it does make a statement about the Genesis’ intent in Australia and around the world. European car makers like Audi and BMW pride themselves on their wagons – or Avant and Touring, as they respectively call them – so by adding the Shooting Brake Genesis is taking on its German rivals head-on.

Not directly, Genesis is still too new to have got involved in racing yet. Which is a shame, because it’s something that might help establish the brand as a more serious rival to the likes of Audi, BMW, Mercedes-Benz, Lexus and Jaguar – all brands that are involved in motorsport in some capacity.

Perhaps a Le Mans assault with its own Hypercar or IMSA GTP program, or given its electric future plans maybe Formula E makes more sense. Either way, hitting the track would give Genesis some more profile. 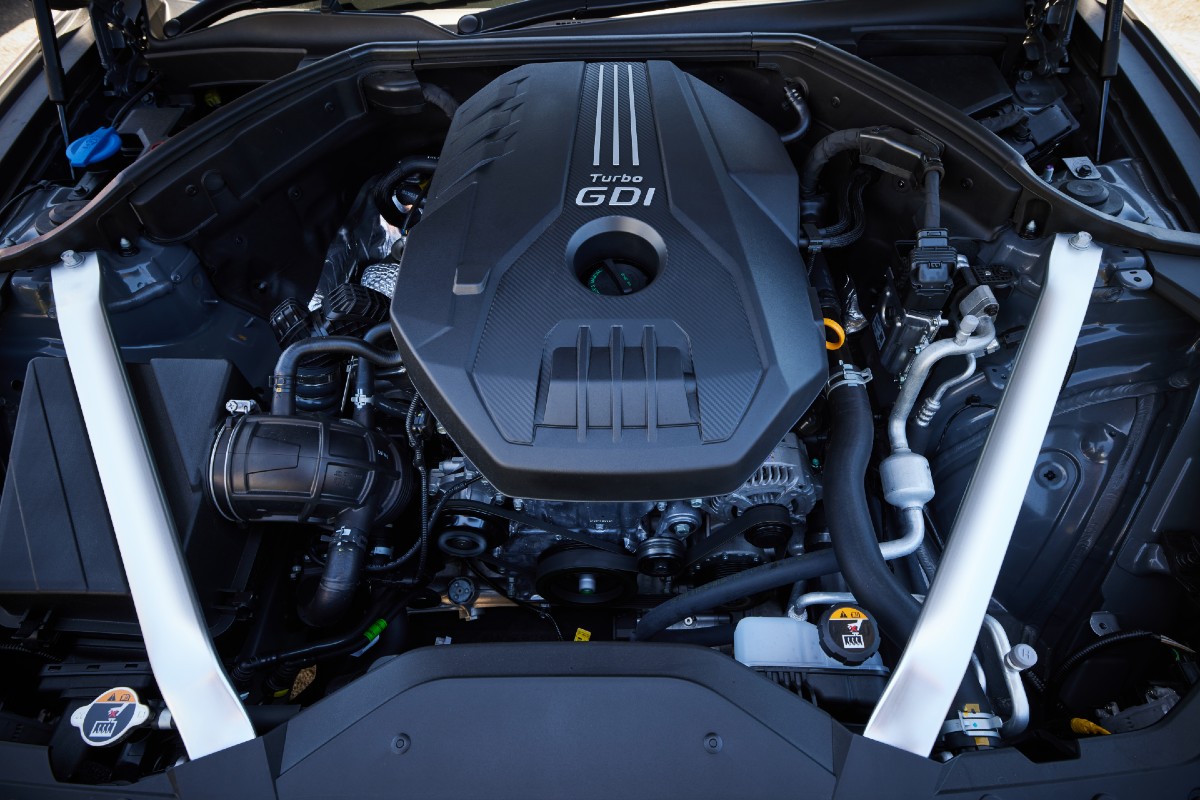 Unlike the G70 sedan that comes with the choice of turbocharged four-cylinder or V6 power, the Shooting Brake only gets the smaller option. It’s a 2.0-litre four-cylinder turbocharged petrol engine making 179kW of power and 353Nm of torque.

It’s paired to an eight-speed automatic and drives the rear-wheels.

However, despite the similarities in capacity and cylinder count, this engine isn’t the same as you find in the Hyundai i30 N – unfortunately. It has enough performance for the G70 to feel quick enough, but it could do with more punch. The 2.0-litre turbo in the i30 N is tuned to make 206kW and 392Nm, so it could help make the Shooting Brake feel quicker and more premium.

It’s also a shame the 3.3-litre twin-turbo V6 isn’t available as an option. The underpinnings of the G70 are actually shared with the Kia Stinger, so there’s an inherent sportiness to the way it drives – even if it is a wagon.

It feels good on the road, with a nice balance between comfort and control to the suspension, direct steering and good grip from the Michelin Pilot Sport 4 tyres (which wrap around 19-inch alloy wheels).

It may not be quite as sharp as the BMW 3-Series Touring, but it holds its own against the Audi A4 Avant. And compared to an SUV alternative, the obvious advantage of the Shooting Brake is its lower ride height and centre-of-gravity, which makes it a much nicer driving experience.

This is an ideal chariot for a long weekend country road trip. This isn’t a twisty, mountain road type of car, it’s more at home on long, sweeping corners, so the open road is ideal.

The extra space of the wagon rear-end is also ideal for those types of weekend explorations where you might pick up a few boxes of wine or some local produce. 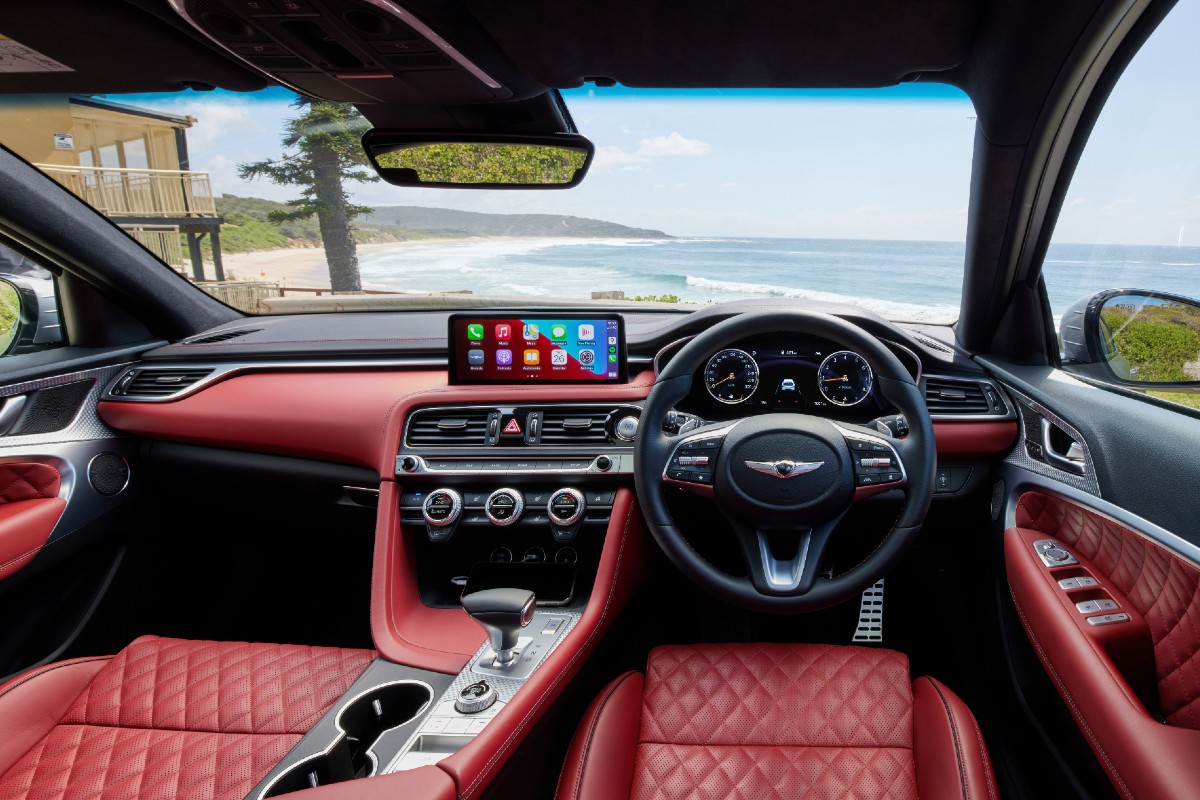 As you can probably guess by the fancy name, if you’re looking for a station wagon because you want more space in the back, the Shooting Brake isn’t really what you want. Sure, the Shooting Brake has a 465-litre boot, but the rakish roofline means it’s smaller than it could be and really only offers hatchback levels of room. If you do need a bit of extra space, the big advantage of the wagon layout is the rear seats can drop down to liberate more cargo room.

That limited space carries over to the back seat, where leg and knee room are at a premium, even for kids. Only the front seat passengers sit in genuine comfort, with the leather-lined seats offering excellent support.

The rest of the cabin is what you find in the G70 sedan, which as we wrote in its review, is unfortunately a generation behind the GV70 and GV80 SUVs in terms of its design. While it’s still luxurious and well finished, it feels conversative and generic in its presentation, especially as Genesis has shown us it can do something more creative as it has in the SUVs.

How much does the Genesis G70 Shooting Brake cost? Where Genesis is trying to offer better value is the ownership experience. Its ‘Genesis-to-you’ concierge service is designed to make an owner’s life easy, with the company bringing the car to you for a test drive and if you buy they will come and collect the car for servicing. So there’s never any need for you to even go to a showroom or service centre. Plus there’s a five-year warranty too.

I’d certainly take it over the G70 sedan, at least in its 2.0-litre guise, because the Shooting Brake succeeds at making a style statement. It’s a sharp-looking wagon that certainly stands out amid a sea of sensible mid-size sedans.

If Genesis offered it with the 3.3T engine it would be hard to ignore, but the 2.0-litre holds its own and the handling is good enough to make it appealing. The lack of rear seat room is also an issue for anyone with a family, which is one reason why you should ultimately consider an SUV.

Overall though, it’s a worthy addition to the Genesis fleet and shows the brand is serious about carving its own niche in the ultra-competitive luxury car market.