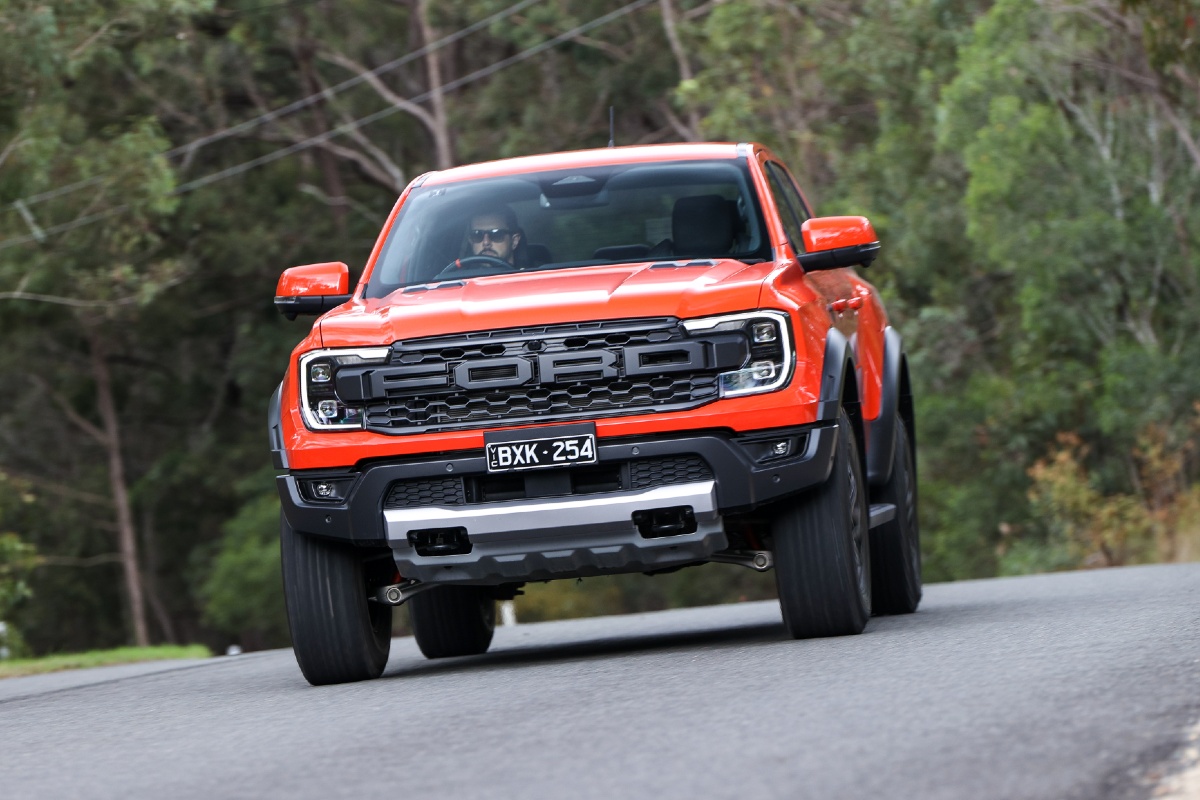 There’s no mistaking who builds this ute with ‘F-O-R-D’ is literally writ large across the grille, sending a clear message to the world that this is a bigger, bolder and more aggressive Raptor.

And Ford shouldn’t be shy about it because the Raptor has become its leading performance hero model in Australia, as the Falcon GT is long gone now and a new-generation Mustang is still months away. Even when the Mustang arrives the reality is the Ranger Raptor really is Ford’s biggest and most obvious flagship model.

We’ve already tested this new-generation Ranger Raptor on the dirt, but now we’re driving it on the road. This is where most owners will spend the majority of their time, so we wanted to see how the Ford Performance leader handles itself. 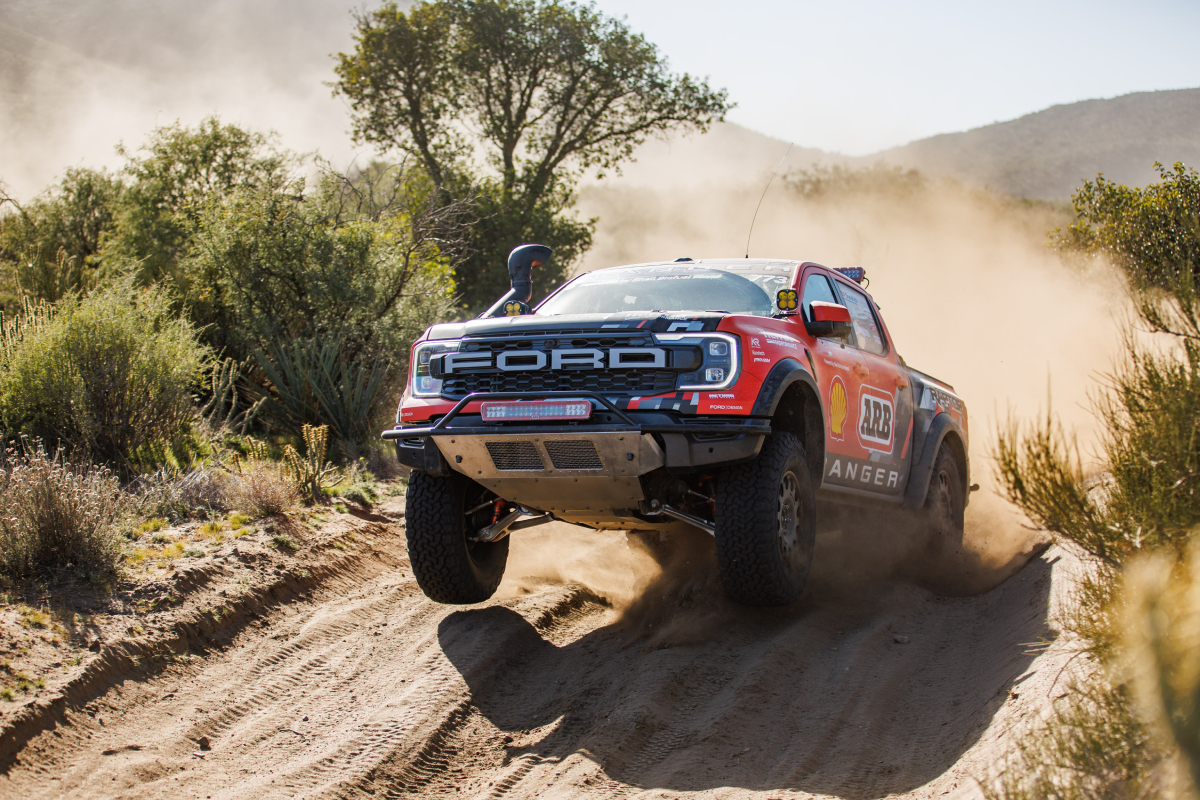 Since we first drove the new Raptor back in September Ford has put it through the ultimate motorsport test for off-road capable utes like this – the Baja 1000.

Prepared by Kelly Racing and entered by US specialists Lovell Racing, a production class Raptor entered the gruelling Mexican desert race and won its class. Well, winning was the obvious result as it was the only car in its class, but it was far from a foregone conclusion due to the arduous nature of the Baja. Running 1000-miles flat-out, non-stop through the desert is the ultimate test for any ute or off-road truck and the Raptor passed with flying colours. As we’ve previously written, one of the biggest changes for this new model is its engine. Out goes the 2.0-litre four-cylinder turbo diesel and in comes the 3.0-litre twin-turbo V6 petrol unit.

It makes 292kW of power and 583Nm of torque, which is a 135kW/83Nm improvement on the diesel. Which naturally means a quicker Raptor, because even though Ford doesn’t publish a 0-100km/h time, the new model feels a lot quicker across the ground than the old Raptor when we’ve driven them back-to-back.

It also sounds better too, with a raspy V6 engine note not too dissimilar to the soundtrack from the Ford GT supercar which runs a similar (but different) EcoBoost V6. Ford spent a lot of time on the exhaust note, tuning four different modes – Normal, Quiet, Sport and Baja – so you can dial it up or down depending on the situation. Around the city and suburbs you can choose to be respectful to your neighbours and run Quiet mode, or just unleash the full-noise in Baja and get some unhappy looks from people in your street.

The new engine made the Raptor feel great on the dirt and that’s the same case around town, with the extra performance and faster response making for a more pleasing driving experience.

The engine is paired to a 10-speed automatic transmission that uses a broad spread of ratios to get the best out of it. Most of the time I just let the car decide on the gear, but when you want to feel more involved the steering wheel-mounted paddles shifters offer crisp manual changes. 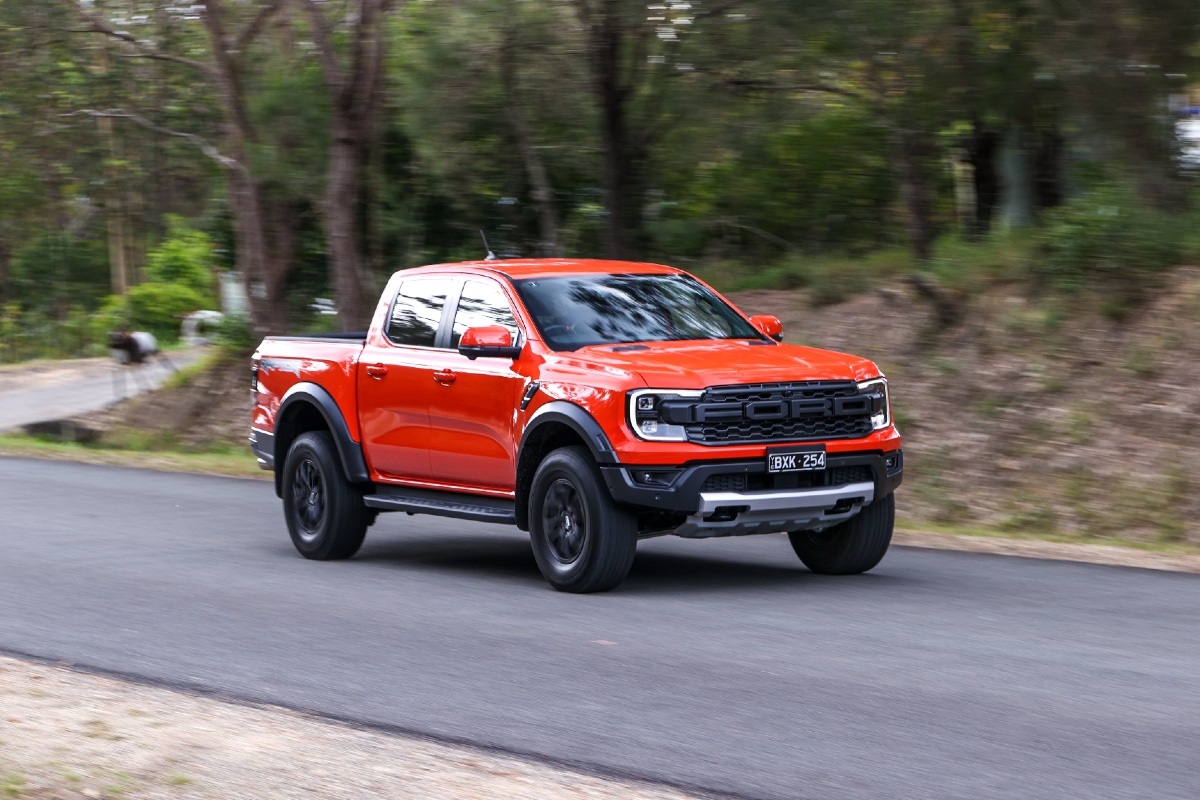 The performance focus for the Ranger Raptor is off-road and to that end it gets a unique suspension set-up, with Fox Shocks at each corner with 2.5-inch Live Valve Internal Bypass damping and a Watt’s link and coil-spring rear-end to replace the leaf springs. It also rides on 17-inch alloy wheels wrapped in 285/70 off-road tyres.

These elements combine to make it an awesome vehicle off-road, capable of climbing through ruts and over rocks with the same ease it slides around dirt corners and hits jumps. On the road it means the Raptor feels capable of conquering anything, making light work of speed bumps and allowing you to drive over roundabouts.

But, more seriously, this more advanced suspension set-up means the Raptor feels more composed and responds more directly than any other dual-cab ute on the market. Backed up by excellent steering that is nicely weighted and direct, it makes the Raptor easy to drive despite its size and potential.

One notable negative is the wheel and tyre package. While great off-road the knobby off-road rubber has a tendency to squeal when cornering sharply on sealed surfaces. It’s a shame Ford Australia doesn’t offer an ‘on-road’ wheel and tyre set-up for those who intend to spend the majority of their time on paved roads, like it does with the Everest Sport and Platinum models, because it’s hard not to feel it would elevate the on-road drive. 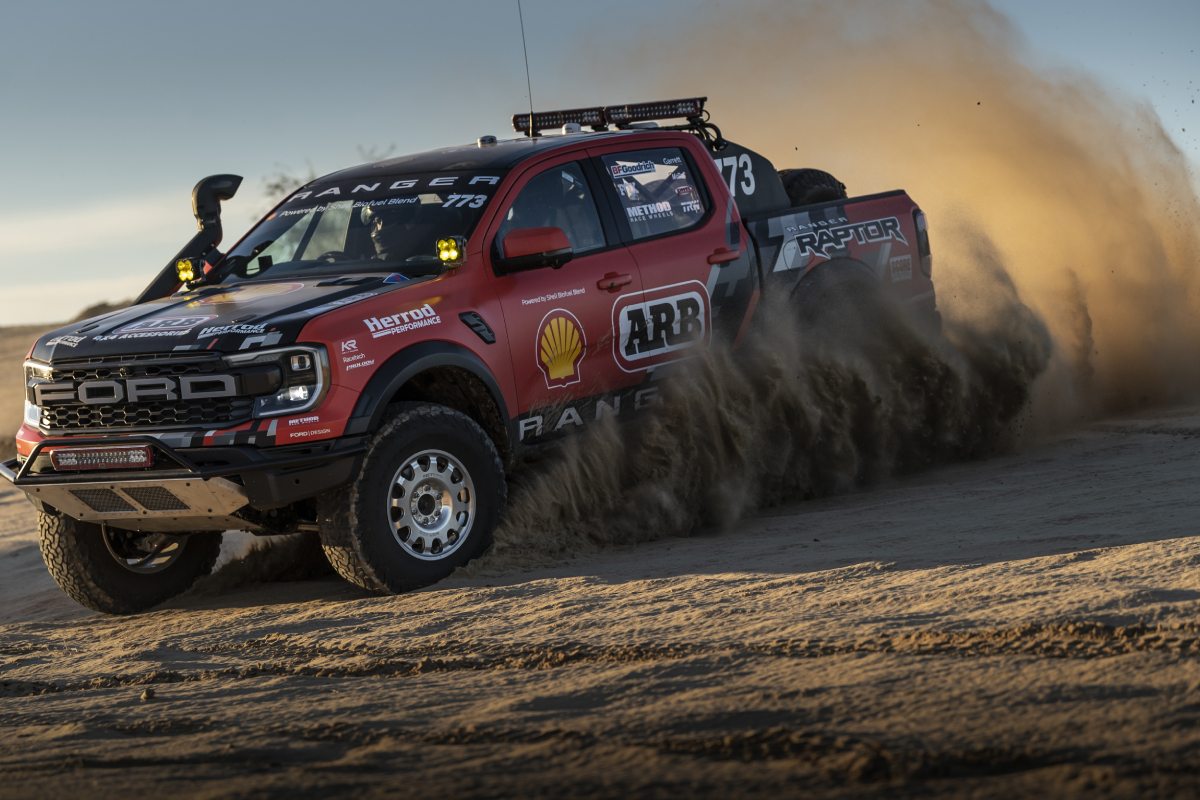 I know this is meant to be a road test, not another off-road review, but after Ford’s Baja entry that’s the only place I want to drive a Raptor now. As we said in our earlier review, the Raptor elevates the Ranger above its commercial ute roots, with more premium materials and design elements.

For example, the seats are inspired by the F-22 Raptor fighter jet and not only look great but offer good support and comfort. There’s also a unique steering wheel with ‘Raptor’ embossed on and contrasting ‘code orange’ stichting as well as other orange highlights around the air-vents that separate it from the rest of the Ranger range.

How much does the Ford Ranger Raptor cost? 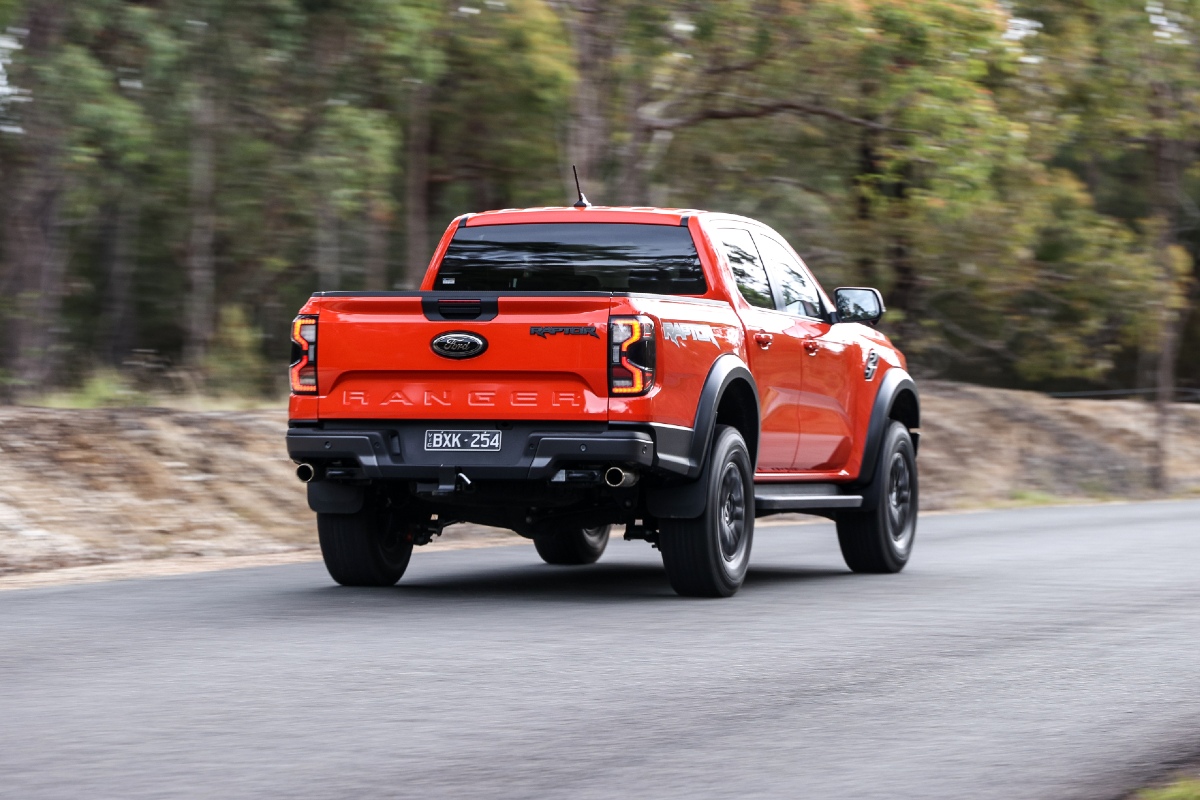 This isn’t as easy to answer as you’d hope. Ford Australia introduced the Ranger Raptor with an asking price of $85,490 (plus on-road costs). However, from March 2023 the price will increase to $86,790 so anyone who takes delivery of one after that will need to pay the higher cost.

This is a challenge for Ford because the Raptor is a huge sales success with the wait times already blowing out until late 2023. This will put dealers in a tricky position with customers, but given the demand for the Raptor the price increase is unlikely to actually turn people off. I would if I could (and had the patience to wait nearly a year for it to get delivered). There’s so much to like about the Ranger Raptor, because on the one hand it’s easily the most off-road capable ute on sale today, while on the other it’s a pleasant and likeable ute to live with around town.

The fortunes of Ford Performance may be riding in the back of the Ranger Raptor, but luckily for the Blue Oval it’s more-than-capable of carrying that weight.