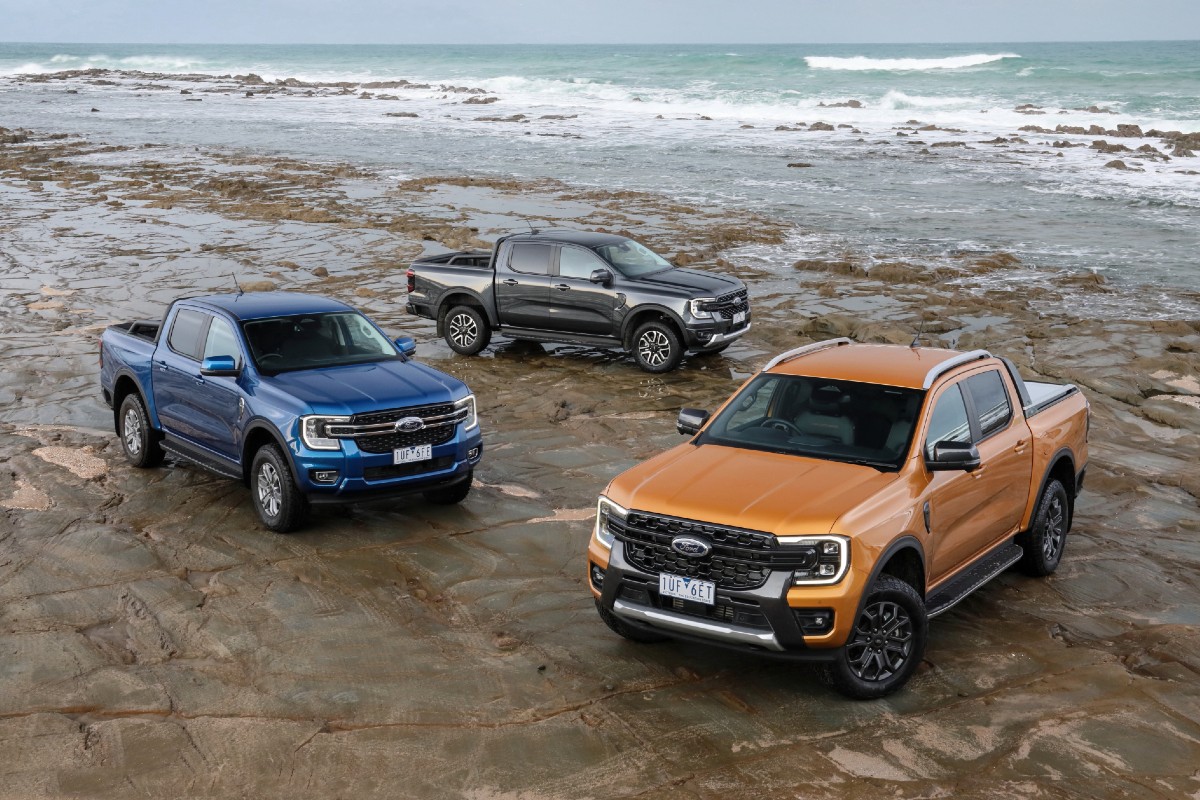 The most important model Ford Australia will launch this decade. To say the Ranger is key to the company’s success locally is an understatement because even in 2021, at the end of its lifecycle, the Ranger accounted for 70 per cent of its total sales.

So there’s plenty of pressure and expectations riding on the back of this latest generation model. The good news for Ford Australia, despite the Ranger being sold in 180 countries around the world, it was the Melbourne-based team that led the design and development of the new model so it has been tailored with this market front-of-mind.

The local Ford team has done a comprehensive upgrade over the out-going model. It starts with a tough new exterior look, which takes elements of the F-150, carries over into a more premium interior and includes a new V6 engine under the bonnet.

There are five models available initially (the high-performance Raptor will follow soon) – XL, XLS, XLT, the now permanent Sport and the range-topping Wildtrak. We were able to sample them all at the local launch of this new model – here’s what we found. Obviously Ford has plenty of motorsport heritage but frankly the Ranger doesn’t really need any. Its success is built on the back of its ability as a workhorse for tradespeople and, more recently, as an adventure vehicle for families.

Having said that, Ford’s involvement in Supercars is designed to help drive sales of the Ranger. The Supercars fanbase are one of the key demographics for the ute and anytime you’re at a race you’ll see plenty of Rangers in the car park. Unfortunately we didn’t get the sample the single-turbo four-cylinder engine, but it’s unlikely to be a popular choice given the other two options. That’s because the 2.0-litre bi-turbo is the out-going model’s premium engine (it debuted in the Raptor before becoming an option on other models) and the V6 offers more power and torque than before.

The single-turbo engine makes 125kW of power and 405Nm of torque, while the bi-turbo boosts those numbers to 155kW and 500Nm of torque. But the reason the V6 is likely to be the preferred option is it pumps out a very healthy 184kW and 600Nm.

The biggest problem with the bi-turbo is its diminutive size and people’s somewhat old-fashioned attitude that there’s ‘no replacement for displacement’. In reality this little engine has a big punch, with plenty of performance on tap when you put your foot down.

However, while impressive in isolation the V6 brings even more punch and does it easier. It just feels more effortless when you accelerate, building speed with little fuss, whereas the 2.0-litre bi-turbo has to work noticeably harder. The smaller engine gets the job done, but just needs to put in more effort to get there.

One noticeably absent feature from the powertrain line-up is a manual transmission. Despite its working-class roots the Ranger has moved more upmarket so the focus is on automatic transmissions.

The single-turbo engine gets a six-speed gearbox as standard while the other two motors are paired with a 10-speed auto.

While the XL, XLS and XLT get a conventional auto gear-shifter, in the higher-grade Sport and Wildtrak Ford has introduced its so-called ‘e-shifter’. This is a similar shift-by-wire system used in other models in the Ford line-up which use a rotary dial. Ford’s research showed Ranger customers didn’t want a dial to select gears so the e-shifter was created to find a compromise between new technology and traditional driver preferences. Ford overhauled the chassis and suspension for the new Ranger, introducing new four-wheel drive systems as well as changers to the ride and handling.

Ford is now offering two four-wheel drive systems – a part-time 4×4 set-up with electronic shift-on-the-fly or a full-time 4×4 system. The former comes standard on the 2.0-litre engines and the latter is fitted to all V6 models.

However, the more noticeable change is how the new Ranger drives, especially on-road. Even on the lower-grade models the driving experience feels much more refined and well-sorted than the previous model.

It still has that ‘jiggliness’ that is inherent in utes, but the ride is much more composed than previously even when unladen. While still capable of hauling it rides much closer to an SUV which should help make it more family friendly.

A bigger leap forward is the steering, which feels significantly more like an SUV than the old model. It has better weighting, while weighty it’s lighter and more linear, which helps both when driving and parking.

On road the new Ranger feels nicer and easier to drive, which should give it even broader appeal. It also makes it for a more relaxed experience behind the wheel for extended periods. Some utes can feel tiring after a while, but the more composed ride and improved cabin make the Ranger a step above its competitors.

We also got to sample the new Ranger off-road, and while we’ll give it an extended off-road review in the near-future, we can report that despite the changes that make it easier to live with on sealed roads, it remains a very capable ute.

We sampled both the part-time and full-time all-wheel drive systems and neither had any trouble with the obstacles we put it through, which includes a deep water crossing, mud, rocks and chopped up tracks. The impressive thing about the new Ranger is, regardless of which model you end up in you can not only drive it in a variety of conditions but enjoy it.

We went through the bush in a V6-powered Sport and found it comfortable and easy to crawl over or through any obstacle. But equally, we drove an entry-level XL with bi-turbo along the freeway for an hour and found it perfectly capable. In keeping with the more polished and premium goal for the design team, the cabin of the Range represents a real step up in terms of presentation and quality.

Even on the entry-level XL there’s a 10-inch tablet-style touchscreen for all the infotainment controls, while the higher grades get a 12-inch screen. There’s also a digital instrument panel and changes to the steering wheels, switchgear and more soft-touch materials (especially on the higher grades).

From XLT up there’s also a reversing camera, traffic sign recognition and rain-sensing wipers, while the Wildtrak even comes equipped with a 360-degree parking camera system as well as the semi-autonomous Park Assist.

However, for all the new technology, Ford also listened to customers who said they still want physical buttons for often-used functions, so there are knobs and buttons for the volume and air-conditioning controls.

Overall the level of presentation and technology, once again, elevates the Ranger from a ‘humble ute’ to a genuine SUV rivaling offering.

If there’s a criticism it’s space, especially in the rear. Despite the obvious push to make it more family friendly, the cabin remains the same size as the old model. That means while there’s good room up-front the rear seats are limited for legroom. It’s alleviated slightly by the front seat backs being deeply sculpted so there’s room for your knees, but it feels like an obvious miss for this new model and an area that could have been improved further.

Another surprising issue is the lack of small item storage space around the cabin. The glovebox is small and the door pockets aren’t huge, while a small ledge above the glovebox provides some room it’s quite narrow. The Wildtrak gets a second glovebox, above the first, which is an improvement but it does feel like tradies and families would prefer some extra places to stash odds and ends.

On the plus side there is a smartphone wireless charging pad at the bottom of the centre fascia so overall the cabin ends up feeling like another area of improvement for this new model.

How much does the new Ford Ranger cost? There are 22 variants of the new Ranger line-up so it’s too extensive to list them all here, but the bottom line is the changes for this new model have come at a price. The new Ranger varies from $240 to $2240 more expensive than the previous model (with the exception of the most popular XLT variant, which actually remains unchanged).

That puts the Ranger at the high end of the ute market, but you ultimately get what you pay for because it’s also one of the best utes available now. 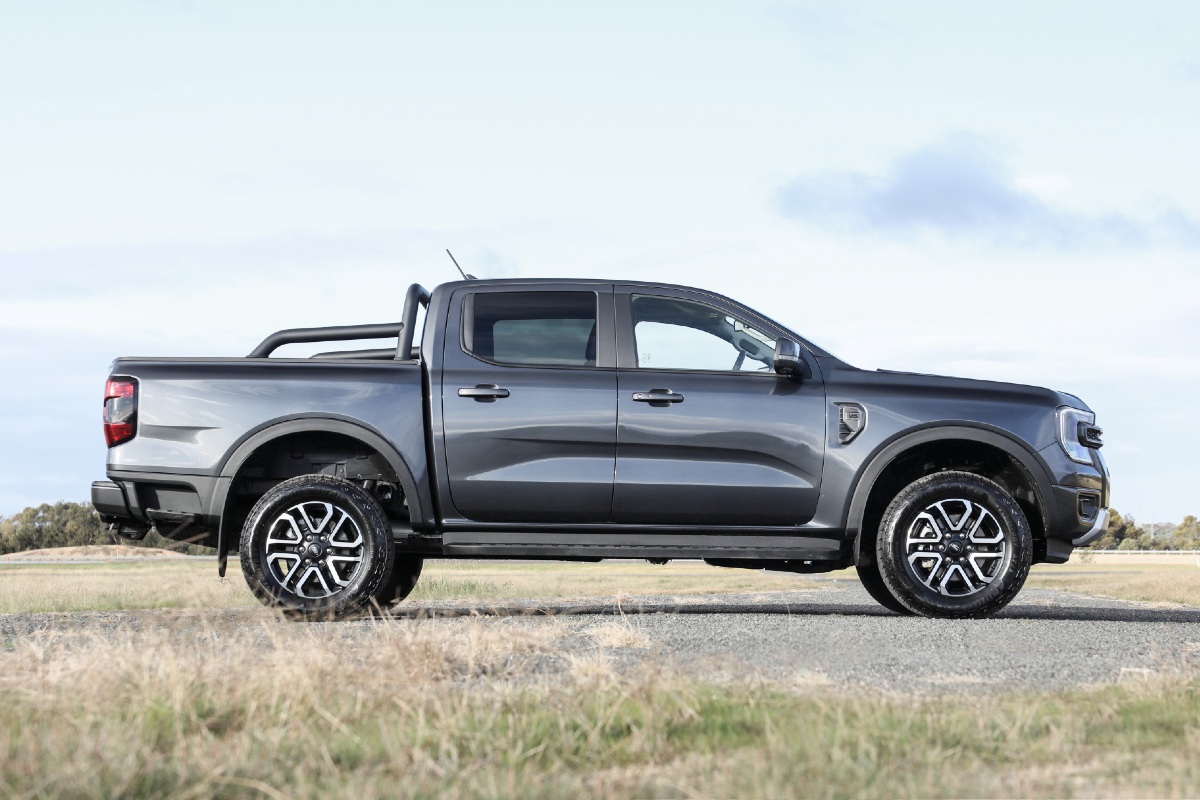 The question isn’t really ‘would I buy one?’ but ‘which one would I buy?’ because this new model is impressive in almost every way. The XLT was the most popular variant of the previous model and I wouldn’t be surprised to see that continued, given it remains unchanged on price but is a nice model overall and has the option of a V6 engine.

Personally, I feel like the now full-time Sport with the V6 engine may be the pick of the range. At $66,690 it’s certainly not cheap, but it’s a great ute that can either work, play or do family duties.

The biggest challenge for Ford in the current circumstances will be simply getting enough supply. The global supply chain crisis could ultimately have a very big impact on not only how many Rangers Ford Australia can sell in 2022, but whether the company has a good year or not.