Audi’s TCR racer for the road. The RS3 Sedan (and Sportback) are the four-ring brand’s compact performance cars, elevating the ‘hot hatch’ to the next level with all the knowledge and experience Audi Sport can bring to them.

Our review will be focused on the Sedan but the Sportback is also available now, giving the brand a rival to the likes of Mercedes-AMG A45 and CLA45 plus the cheaper Volkswagen Golf R, Cupra Leon VZx and even the Subaru WRX.

The Subaru may seem like a stretch (and it is in many respects), but perhaps the best way to think of the RS3 Sedan is as a more ‘grown up’ and premium version of that sort of car. At its fundamental level it’s just a small car with a big engine, but the work Audi Sport’s designers and engineers have done has refined and elevated it to another level for a different type of customer. The RS3 road car and TCR racer (officially known as the RS3 LMS) were developed together, with the track version actually appearing ahead of its showroom equivalent. Customer racing is an integral part of Audi Sport’s business model, with the RS3 LMS and the GT3-spec R8 LMS providing steady sales of cars and parts.

The RS3 LMS is actually powered by a 2.0-litre four-cylinder engine from the S3, instead of the 2.5-litre five-cylinder in the road car, but the engine is straight from the road car production line and even features stock engine block, valve train, cylinder head, intake manifold, turbocharger and fuel injection system. 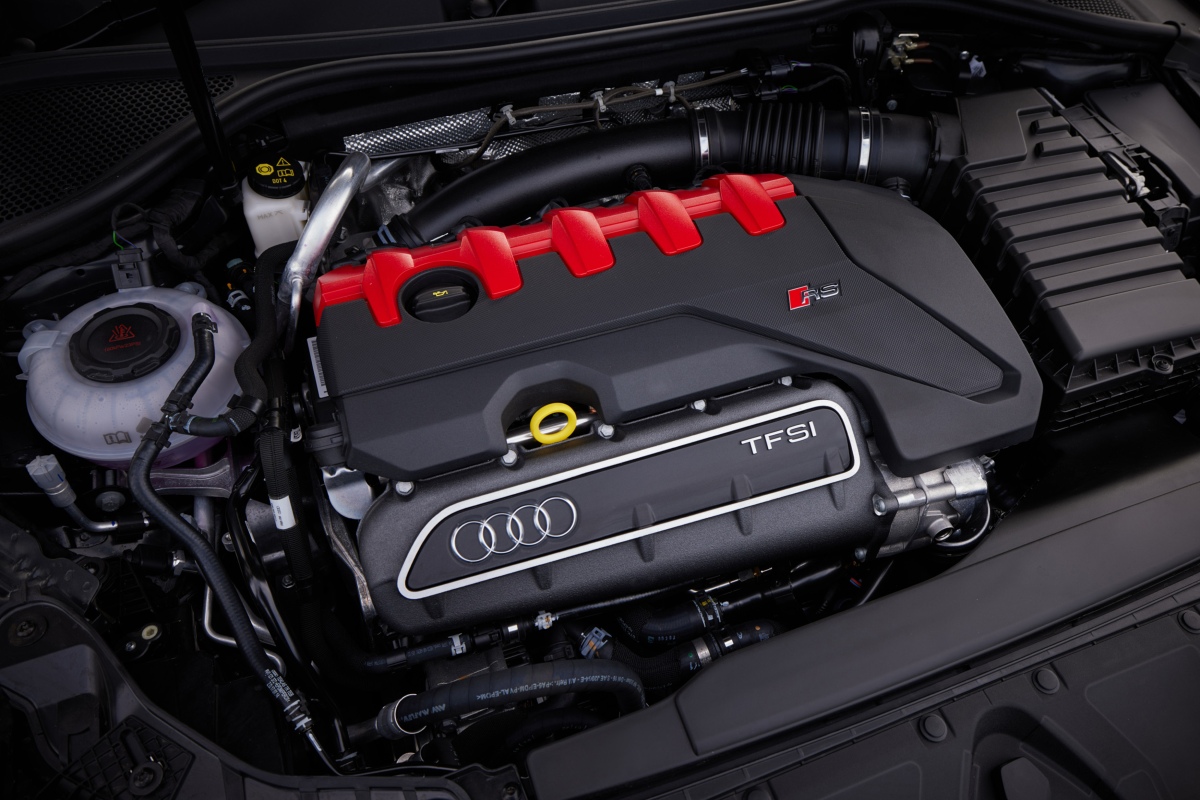 The RS3 carries on the legacy of Audi’s now iconic five-cylinder turbocharged petrol engine that’s best remembered for powering the ur-Quattro (even though it dates back beyond that). The latest 2.5-litre unit punches out 294kW of power and 500Nm of torque and is paired to a seven-speed dual-clutch transmission.

One major goal for Audi was to ensure it was the ‘fastest’ car in its class, and they succeeded – at least on paper – with a claimed 0-100km/h time of 3.8 seconds, just besting the AMG’s 3.9 second claim. It has a standard top speed of 250km/h but will run all the way to 290km/h if you pay for the optional RS Dynamic package, which adds carbon ceramic brakes.

It certainly didn’t feel slow when we hit The Bend during the recent local launch. Audi had the RS3 LMS on hand with German veteran Pierre Kaffer taking lucky attendees for hot laps. Interestingly the top speed in the road car was only a few kays down on the speed the race car managed.

On the road the combination of the rorty five-cylinder and all-wheel drive means it launches out of corners with ferocity. Point-to-point and on a twisty road the RS3 Sedan would be capable of holding its own against genuine sports cars – it’s that quick. 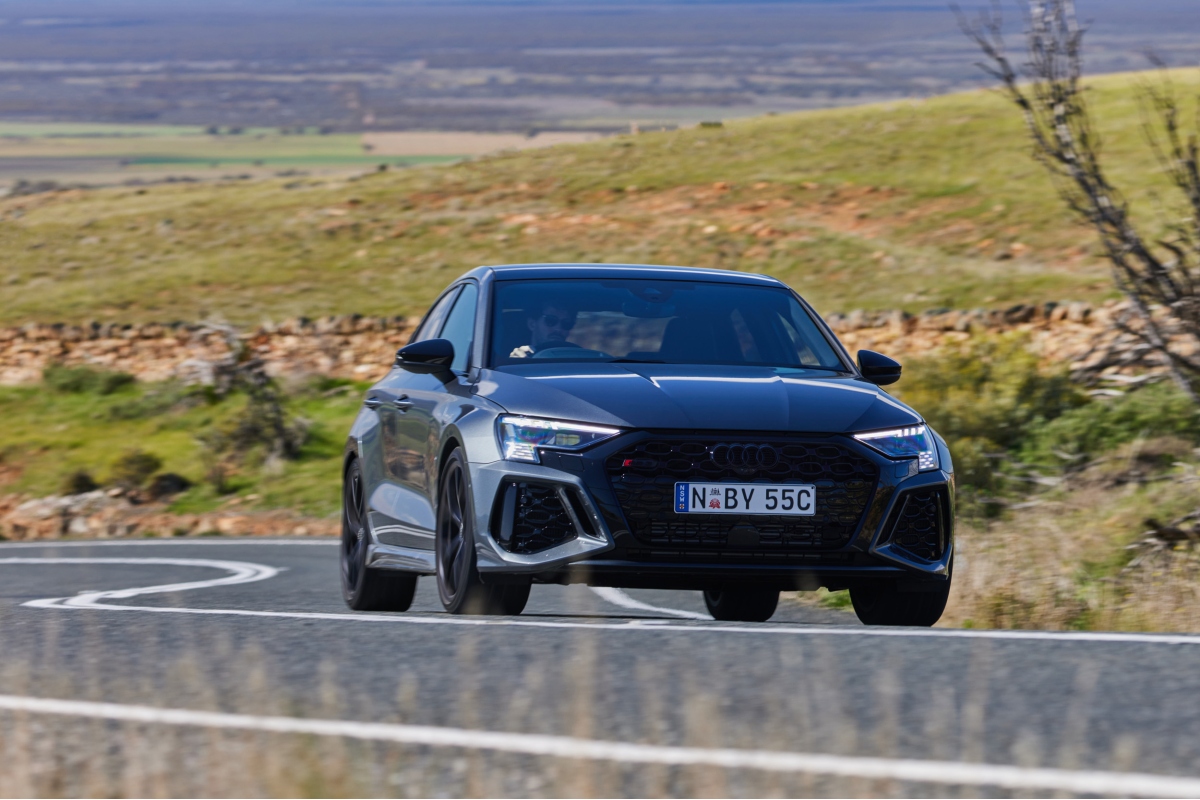 While the engine and transmission are evolutionary, there has been a revolutionary change to the brand’s famous ‘quattro’ all-wheel drive system.

The previous generation used a Haldex rear differential, which meant it was only a part-time all-wheel drive car, as the Halex system would only send power to the rear wheels when it sensed the fronts were slipping. For this new model Audi has developed what it’s calling the RS Torque Splitter, a pair of multi-disc clutches that sit on the rear axles and are able to direct variable amounts of torque to each wheel.

There are two main benefits to this new set-up. Firstly, the active torque vectoring helps the car when cornering by accelerating the outside wheel to make it turn more sharply. Secondly, it allows for a ‘Drift Mode’ with the majority of the torque sent to the rear wheels, allowing you to slide the tail of the car around; if that’s your kind of thing.

While the ability to drift a hot hatch is a fun new feature, the really impressive part of the new RS3’s technical tricks is the impact it has on the handling. You can really feel the active torque vectoring to help the car turn when you’re corning, which only adds to what is already a very responsive chassis with excellent steering.

On the fantastically flowing roads of the Adelaide Hills the RS3 Sedan felt absolutely brilliant, with just the right blend of power and handling to elevate this car from merely a ‘hot hatch’ to a ‘compact performance car’.

Unfortunately our drive at The Bend was limited to only a handful of laps. Enough to get a taste of what it was capable of but not enough to really explore its limits, so an extended track session – especially at The Bend with its multiple layouts – would be a treat in the RS3. In a word – fantastic. As I’ve written many times, Audi is an industry leader when it comes to interior design but even by its own high standards the RS3 Sedan is something special.

While based on the stylish A3 which was already driver focused in its layout – the air-con vents are integrated around the instrument cluster giving it a very ‘race car’ feeling – the RS3 builds on that with a raft of sporty changes. There’s swathes of Alcantara and leather, and if you spring for the optional interior upgrade you can add splashes of colour – either red or green.

As for the specifics of the sedan, it’s actually a surprisingly roomy back seat for what is ultimately a small car. It’s a bit tight on kneeroom but overall it would suit young families or occasional short trips with friends.

How much does the Audi RS3 Sedan cost?

This is where the elevation from ‘hot hatch’ to ‘compact performance car’ is also very noticeable. The RS3 Sedan is priced from $93,891 (plus on-road costs), which means you’re not getting any change from $100k. No matter how you look at it, because it is a very impressive car, that’s ultimately a big amount of money for a small car. 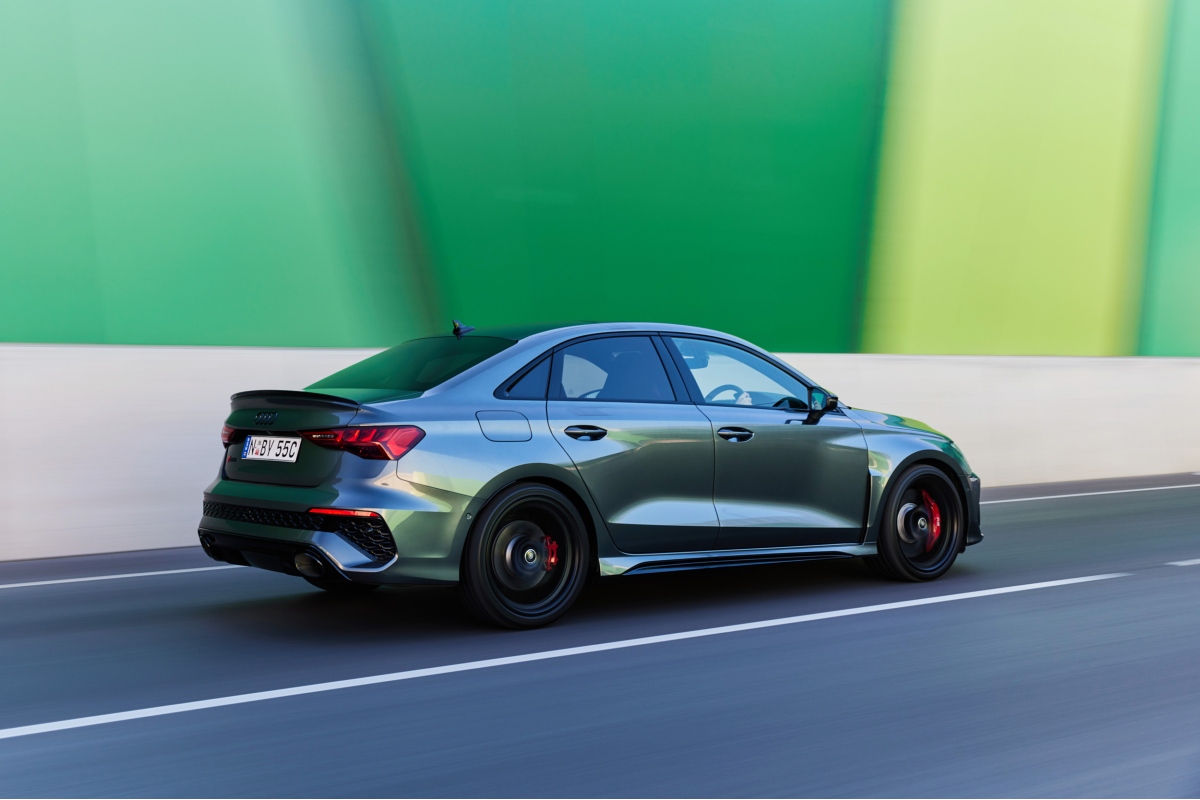 This is a sports car hidden inside the body of a practical small sedan. Every element, from its aggressive exterior to its sophisticated cabin and its grunty engine to its cutting-edge chassis, this latest RS3 is a major leap forward.

An RS3 LMS would be nice for the weekends but lacks the breadth of capability the RS3 Sedan has because it thrilled on both the track and the road.