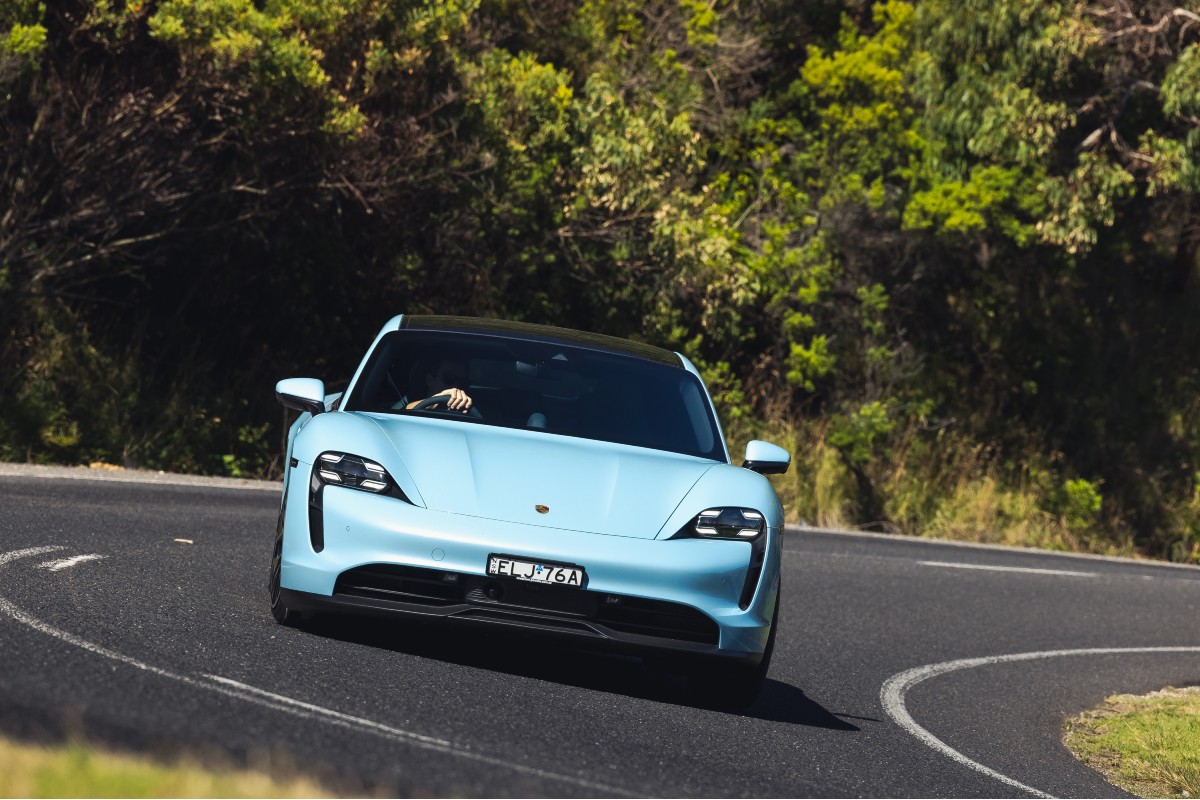 Put simply, this is Porsche’s future.

While the company is working on carbon neutral synthetic fuel to preserve its hero sports car, the 911, the reality is many of Porsche’s key markets will ban the internal combustion engine within the next 15 years. So, electrification is the key to its future and the Taycan is its first step into this increasingly competitive market.

Porsche made the switch from Le Mans Prototypes to Formula E around the same time it was planning the Taycan, so there’s no doubt plenty of crossover – both on a marketing and engineering level.

READ MORE: Porsche commits to next generation of Formula E Competing in Formula E has allowed the German brand to both learn about the specific demands of high-powered electric powertrains, but also demonstrate its ability to produce an electric vehicle both on and off the racetrack.

While the ‘Turbo’ badge on the other models may be confusing, the Taycan 4S is more apt. That’s because it has four-wheel drive (like other Porsche models that carry the ‘4’ badge), albeit thanks to an electric motor mounted on each axle. 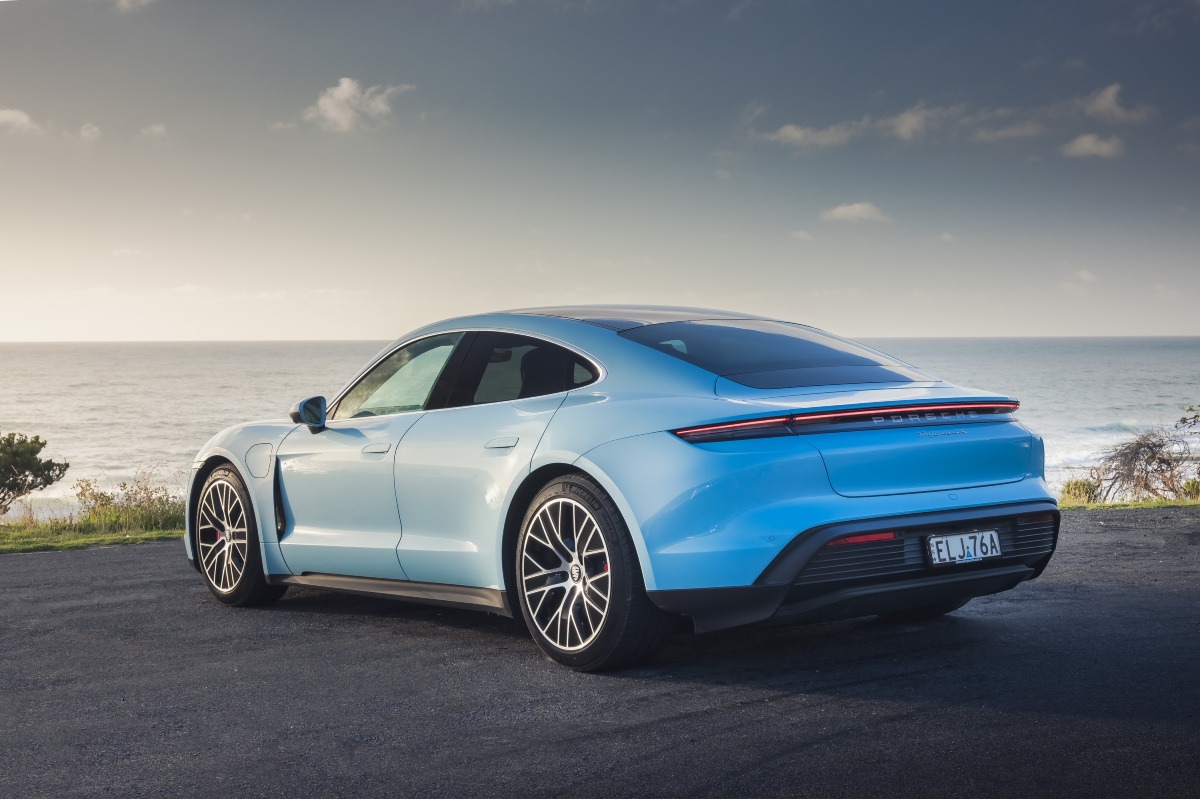 If you’re thinking ‘well, doesn’t that make the Taycan 4S feel slow?’ think again. While it may not be as ludicrously fast as the Turbo models, it’s still tremendously rapid whenever you put your foot down.

And I mean, whenever, because unlike even the most potent petrol-powered Porsches that require being in the right rev range to deliver maximum performance, the electric motors in the Taycan are able to give maximum torque effectively immediately.

The ease and ferocity with which the Taycan 4S accelerates can literally be sickening. This reviewer has found repeated blasts can induce mild car sickness at times – it’s that quick!

One of the big reasons it’s so rapid is because unlike most EVs that use a single-speed transmission, Porsche uses a two-speed gearbox. While it adds weight and complexity, it does mean the Taycan can offer both ballistic acceleration and still have maximum range that is more difficult to achieve with a single-speed ‘box.

For the record, Porsche claims the Taycan 4S will run 0-100km/h in 4.0 seconds – which is impressive for a four-door sedan. While we didn’t get a chance to run it against the clock, based on our experience with the Taycan Turbo S, it’s highly likely that time is not only achievable, but also beatable (given Porsche is a famously conservative company when it comes to acceleration claims).

Like a Porsche. If you think making an all-new electric car was going to lead to a sudden dulling of the German brand’s ability to finely-hone a chassis, you’d be wrong. Yes, it’s heavier than a typical Porsche (or at least a non-SUV Porsche), but it still has the same razor-sharp handling that the brand is synonymous with. While many of its rivals – both petrol and electric powered – can be engaging to drive, the German firm just does things better.

The steering is a thing of beauty – nicely weighted and incredibly direct. Turn into a corner and you can place the Taycan 4S with utter precision and confidence, with the chassis sitting flat and responding immediately to every input.

Another appealing element to the way the Taycan drives, particularly in comparison with other EVs, is the braking. Most EVs use regenerative braking as soon as you take your foot off the accelerator pedal, resulting in sharp and very noticeable deceleration without even touching the brake pedal. It does this to recover energy lost when slowing down, topping up the battery as you drive.

Not the Taycan. Porsche has integrated the regenerative braking into the conventional braking system, so it still manages to capture the otherwise lost energy, but drives in the same manner as a petrol-powered sports sedan.

But as good as it is to drive quickly on a challenging piece of road, the Taycan is equally just as enjoyable to drive to the shops or take the kids to school. This is, after all, a four-seater sedan and it plays the role of luxury executive car just as well as it does electric performance hero.

The beauty of the Taycan 4S is, as battery technology continues to improve, the places you can take an EV get farther and farther away. The official range for the 4S is 365km, but adding the Performance Battery Plus will not only increase performance to 360kW, it will also extend the range to 414km. Also, because the Taycan battery features an 800-volt electrical system it can support ultra-rapid charging from a 350kW charger. These are becoming increasingly available with public infrastructure companies like Chargefox and Evie and can add 100km of range in just five-minutes.

That means the Taycan 4S would make for an ideal car for a road trip, just like a petrol-powered sports sedan.

Regardless of what’s underneath the bonnet, the Taycan is a fantastic looking machine inside. While it’s loaded with technology – including screens for the infotainment, air-conditioning and even the passenger – it also manages to retain key Porsche design features. For example, the thick-but-not-too-thick steering wheel feels like any other Porsche. But you look through it to an unique digital instrument panel that can be adjusted to display a variety of information.

The high-mounted stubby gear selector does take some adjustment to become comfortable, and is unlike any other Porsche, but it does free up more space in the centre console for small item storage.

As for the space, that’s a little disappointing, at least for those who intend on using the back seats on a regular basis. Thanks to the sports car-style roofline, even getting into the Taycan can be a challenge for taller folks, and while the front seats are comfortable and spacious, the back is tight. Trying to fit two adults in the rear is difficult thanks to the lack of both headroom as well as knee and foot space. It’s a letdown on what is otherwise an excellent cabin and does dull its appeal as an everyday family car.

While it may lack the ultimate power of the Turbo S, what the Taycan 4S also lacks is the price tag north of $340k. Instead the 4S starts at $194,700 (plus on-road costs), which is still a lot of money but positions it competitively against its key competition. The most obvious rival is the Tesla Model S Performance, which starts at $154,200. But you could also cross-shop against the Jaguar I-Pace EV400 HSE (from $151,432), because it shares a similar sporty EV theme as the Taycan despite its more SUV-like body.

Definitely. In my opinion the Porsche Taycan is the pick of the current breed of EVs. While it’s far from the cheapest, it’s combination of performance, luxury, design and finish makes it stand out from its closest electric competition. Even when compared to its petrol-powered rivals the Taycan 4S makes for an appealing proposition due to its immediate response and quiet, relaxed nature.

If this is the future of Porsche, it looks promising despite being such a radical departure from what we’ve come to expect from the German sports car giant.