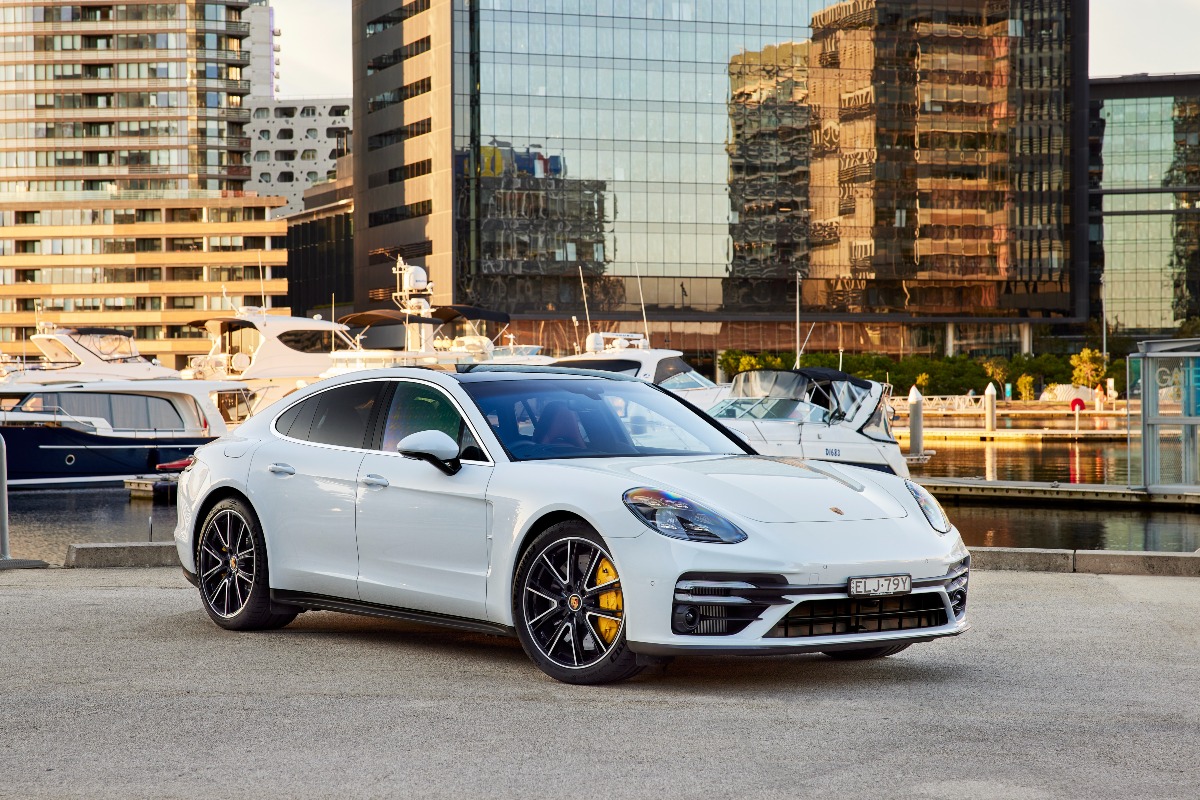 A private jet on wheels. This is the flagship of the German brand’s luxury sedan range, so it boasts an incredibly powerful engine, an extremely capable chassis and a very luxurious cabin. So it’s ideal for those who want to be able to get somewhere fast and in comfort.

This is the update of the second-generation Panamera that originally launched in 2017. We tested the ‘entry-level’ Panamera earlier this year, but now we’ve had a chance to get behind the wheel of this even more potent version to see what it offers.

Porsche prefers to race its sports cars – the 911 and 718 – but that doesn’t mean it avoids track work with the rest of the range. The Panamera Turbo S claimed a new Nurburgring lap record for an “executive car”, lapping the 20km German circuit in 7:29.81 seconds, a whopping 13 seconds faster than the Panamera Turbo it replaced. The impressive performance of the Panamera Turbo S is thanks to its 4.0-litre twin-turbo V8 that makes 463kW of power and 820Nm of torque. It’s that second figure that’s the key to the Panamera’s ability to shove you back in your seat, with so much torque available from just 2300rpm and staying steady until 4500rpm. Paired with Porsche’s specially-developed eight-speed dual-clutch automatic transmission and an active all-wheel drive system, the Panamera has no trouble transmitting all of the grunt to the tarmac.

The Turbo S launches with a ferocity that you don’t expect in such a large and luxurious car. It will not only shove you back in your seat when you take-off, it will keep you pinned as the acceleration pours on for as long you dare.

The Panamera may not have always been the prettiest Porsche, but it has always been a remarkable sports sedan. Despite measuring more than 5m in length, the Panamera is brilliantly composed and responsive on the road, feeling like a much smaller car than it actually is. As I’ve written previously, where the Panamera really shines is when you turn into a corner. The steering is incredibly accurate and the chassis remarkably responsive, so it goes exactly where you point it, without any of the hesitation or vagueness big sports sedans can be plagued by.

However, as dynamic as it is, the Panamera Turbo S is also capable of playing the luxury car role with ease too. The suspension is remarkably compliant for a car riding on 21-inch rims, never feeling too firm or busy even on urban roads.

The Panamera Turbo S feels built for Germany’s autobahns and alpine roads. This would be an ideal vehicle for a cross-country trip, being capable of soaking up long highway stretches with ease but also being fun and engaging to drive when the road gets twisty.

It fits within the broader Porsche range nicely, with a very similar appearance to what you’ll find in the 911. The thick-rimmed steering wheel, trademark centre tachometer on the instrument cluster and body-hugging sports seats. Porsche has managed to nail the idea of functional simplicity, with every element of the cabin serving a purpose and well-presented.

Where the Panamera loses some points for a sports sedan is the back seats. While the Turbo S treats the rear passengers with plenty of amenities, including their own air-conditioning, space is tight. Adults and taller teenagers will find the back seats a bit of a squeeze both for headroom and knee space; which is why Porsche sells an ‘Executive’ long-wheelbase model for those who value rear room.

The Panamera Turbo S sits almost at the very top of the line-up, with only the Turbo S E-Hybrid costing more. At $415,700 (plus on-road costs) the Turbo S is a very expensive car, which makes it hard to really call it ‘good value’ for the majority of people. There’s something about the Turbo S that makes it appealing despite the hefty price tag, and for those who can afford it, it’s hard to argue they shouldn’t buy it. It’s a great sports sedan, with immense performance from a brilliant engine and sports car-like handling.

With a new wave of electric sports sedans coming in the near future, it’s likely the Panamera Turbo S could be the last of its kind. So it’s a car worth celebrating while we can.