The final member of Hyundai’s N Performance line-up… for now.

The i30 Sedan N completes the South Korean brand’s quartet of performance cars, which includes the recently-launched Kona N and i20 N as well as the original Hyundai hero – the i30 N hot hatch.

As the name implies the i30 Sedan N has a lot in common with the i30 N, including the same engine, transmission, electronic limited slip differential and Nurburgring-tuned chassis. However, there are some important differences that, in theory, make the i30 Sedan N the superior choice.

That’s for two major reasons – firstly, it’s built on a newer platform than the rest of the range, the same one underneath the regular i30 Sedan and is an evolution of what underpins the i30 hatch. The second reason the Sedan should be better than the hatch is that Hyundai’s N division has been able to apply the lessons learnt on the rest of the range to create its most advanced performance car yet.

So in addition to the previously mentioned shared components, the i30 Sedan N has World Rally-inspired front-end technology, specific suspension geometry and unique tyres developed with Michelin.

We spent more than four hours behind the wheel, putting the i30 Sedan N through its paces on some of the most demanding roads in New South Wales, and here’s what we discovered.

While it’s known as the i30 Sedan N in Australia, internationally the same car is called the Elantra N and is used as the company’s latest TCR entry. The factory-backed teams in the WTCR series debuted the Elantra N TCR this year, and while not as successful as the championship-winning i30 N TCR hatch, the connection between the race cars and the expanding N Performance range is important for the South Korean company.

Ironically though, the best example of this connection between competition and production cars comes from Hyundai’s World Rally team, not the TCR program.

The i30 Sedan N is the first road car to be fitted with what the company calls its ‘Integrated Drive Axle’ (IDA) which is a new way to build the front wheel hub. Put simply, as the name implies it integrates more components to reduce weight. Hyundai claims it reduces unsprung mass by 1.7kg per corner while also allowing a larger diameter wheel bearing and a more rigid construction.

The i30 Sedan N shares the same 2.0-litre four-cylinder turbo petrol engine as the i30 N and Kona N. Specifically it’s the latest version of the engine which features Hyundai’s so-called ‘flat-power tune’ which is designed to spread the performance more evenly across the rev range. Like the hatch it’s paired to a choice of either an eight-speed dual-clutch transmission or six-speed manual.

As we’ve previously outlined, N Grin Shift increases torque by allowing the turbocharger to overboost for a short burst (roughly 20 seconds); N Power Shift provides faster shifts on track; and N Track Sense Shift is effectively a sports mode for the transmission, allowing it to hold gears and be more aggressive when conditions suit.

The manual gearbox doesn’t have any of these features but it does come with a rev-matching system so you can sound like a heel-and-toe like a racing ace.

Given it’s likely to account for nearly 75 per cent of all sales we spent our drive in the N-DCT equipped i30 Sedan N and came away impressed by its performance. Obviously it doesn’t feel much different from the i30 N and Kona N, but that’s no criticism because both are punchy compact performance cars.

The flat-tune power philosophy shone on our drive down the snaking Putty Road, where the low-end torque helped pull the Sedan out of corners in third gear and then have enough grunt to run on well past the speed limit if you kept your foot buried.

While the engine feels familiar, there’s a very noticeable and very different character to the i30 Sedan N compared to its hatchback sibling on the road. The hatch has always been one of the most playful and enjoyable hot hatches on the market, and really helped establish Hyundai’s credentials in these previously uncharted waters for the brand. This new Sedan feels less playful and more sophisticated, with a more mature but no-less rapid nature on the variety of roads we sampled with it.

A major part of that is the different underpinnings, with the Sedan’s newer, more advanced platform feeling more polished. Dimensionally it’s a larger car, with a 70mm longer wheelbase which translates to a more stable car when cornering, allowing for more confidence from the driver at the expense of the lively nature of the hatch.

Then there’s the unique suspension geometry and the Integrated Drive Axle set-up, which means what’s underneath the front of the Sedan is very different from the hatch. The idea behind these changes was to create better turn-in and response when cornering, and in that sense it’s mission accomplished.

The i30 Sedan N has the kind of poise and control you expect from a larger car and when combined with the added stability of the longer wheelbase it makes for an exciting car to push to its limits, while knowing it won’t snap and bite you.

The whole package is helped by the introduction of Michelin Pilot Sport 4S tyres for the first time on an N model (the rest of the N range typically roll on Pirelli P Zero rubber). These especially-designed tyres measure 245/35 and wrap around the 19-inch rims.

Also helping the handling is Hyundai’s trusty e-LSD, the trick front diff that does a great job of pulling the car out of corners without overwhelming the tyres with torquesteer.

Having tested every other Hyundai N model on a racetrack it only seems fair we should put the i30 Sedan N through its paces on a circuit. The good news is, by the time you read this Torquecafe will have done just that.

We won’t say where, but we will tease that Hyundai’s new ‘Track Maps’ features both Sydney Motorsport Park and Wakefield Park at present. So stay tuned for our upcoming Track Test…

It’s what we’ve come to expect from these second-generation Hyundai N models – a well-equipped base car loaded with as many sporty touches as possible. There’s also a pair of 10.2-inch screens – one for the instrument panel and one in the central infotainment functions, which features the Performance Driving Data system that includes the Track Maps.

But the centre screen is not just for performance, it also includes navigation, Apple CarPlay/Android Auto and other entertainment features.

One notable oddity is the fairly large section of the main dashboard/instrument panel that sits to the right-hand side of the steering wheel. It’s black with a white circle on it, but performs no useful function. This is where Hyundai positions the drive mode selector on the N Line model, but without any purpose on the i30 Sedan N it does detract from an otherwise thoughtful interior design.

Hyundai has kept it really simple for this model, offering only the one variant – the i30 Sedan N Premium. It’s priced from $49,000 (plus on-road costs), regardless of which gearbox you choose.
This is in keeping with the overall rising price of ‘hot hatches’ (to use a general term for hatches and sedans of this ilk), but does mean this is a relatively expensive proposition.

The good news for Hyundai is the i30 Sedan N has limited competition, at least in terms of direct four-door sedan rivals. The bad news is, the two rivals are the Skoda Octavia RS and the Subaru WRX, which are two very tough competitors. 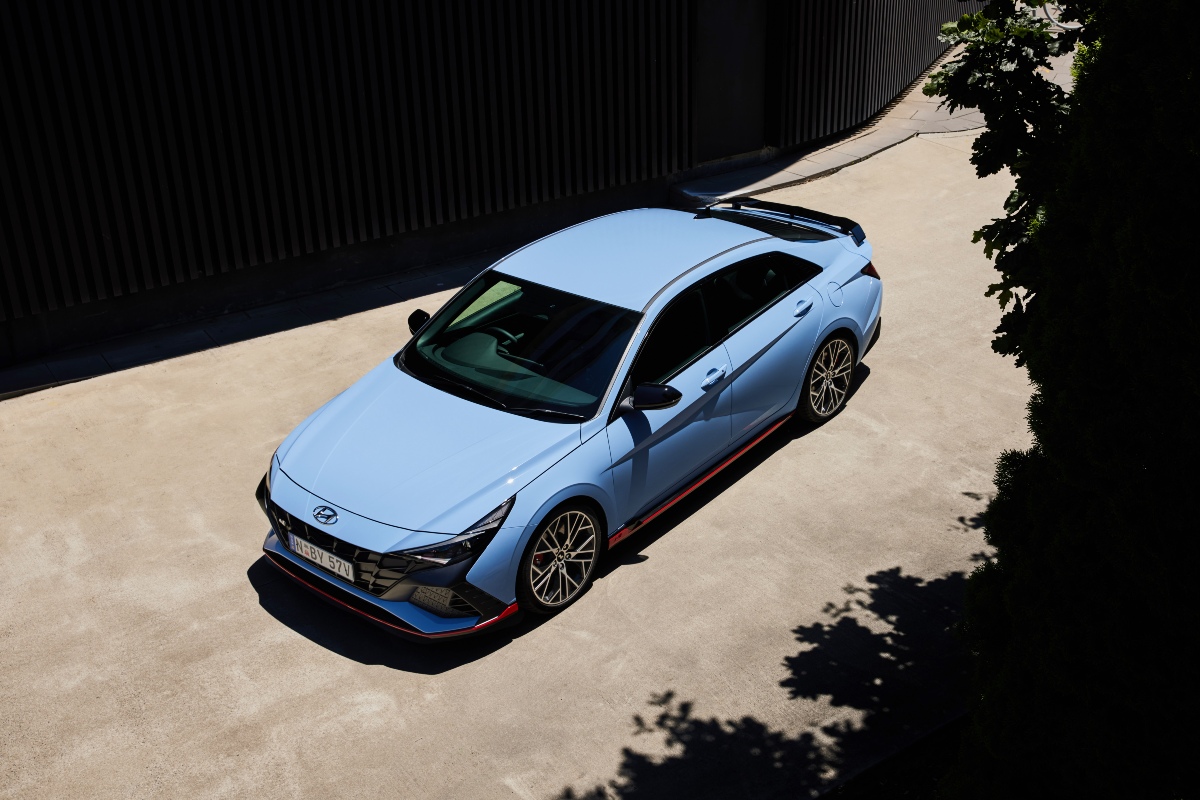 This is a difficult question to answer because the i30 Sedan N is, on the technical front, a better car than it’s hatchback sibling. It feels more composed and confident when cornering, and just as quick in a straight line.

But it lacks the playful edginess that makes the i30 N so appealing. And it’s also a sedan, a polarising design to look at too. Australians overwhelmingly prefer hot hatches because of the added practicality (and that’s something to consider come resale time).

The good news for Hyundai is, whether you want a hot sedan, hot hatch or hot SUV it now has you covered.