The long-awaited second addition to Hyundai’s N Performance range of hot hatches. This is the smaller sibling of the i30 N, but it follows a similar formula and packs plenty of punch for its size.

The i20 N is an appropriate car to add to the N line-up, because the i20 was the basis for the South Korean brand’s very first N model – its 2013 World Rally Championship contender. It also underlines the shifting city car market in Australia, with the N the only model offered in the i20 range in Australia.

In some respects the i20 N is a natural competitor to the Toyota GR Yaris – both are the foundations of the respective companies’ 2021 rally cars and both are city car-sized hot hatches. But that’s about where the similarities end, because the Toyota is a dedicated homologation special with a unique body and all-wheel drive powertrain.

The i20 N is a more traditional hot hatch, with a turbocharged engine borrowed from an existing model, front-wheel drive and some sporty additions (like a wing and bigger alloy wheels) to an exciting city car model.

That means while the i20 N will compete against the Toyota in the WRC, in the showrooms it will line-up more directly with the Ford Fiesta ST and Volkswagen Polo GTI.

While the i20 has been Hyundai’s car of choice for its WRC program, there’s naturally very little in common with the production car and stage-ready WRC machine. But Hyundai is able to draw a more direct connection between the i20 N and its new Rally2 entry. 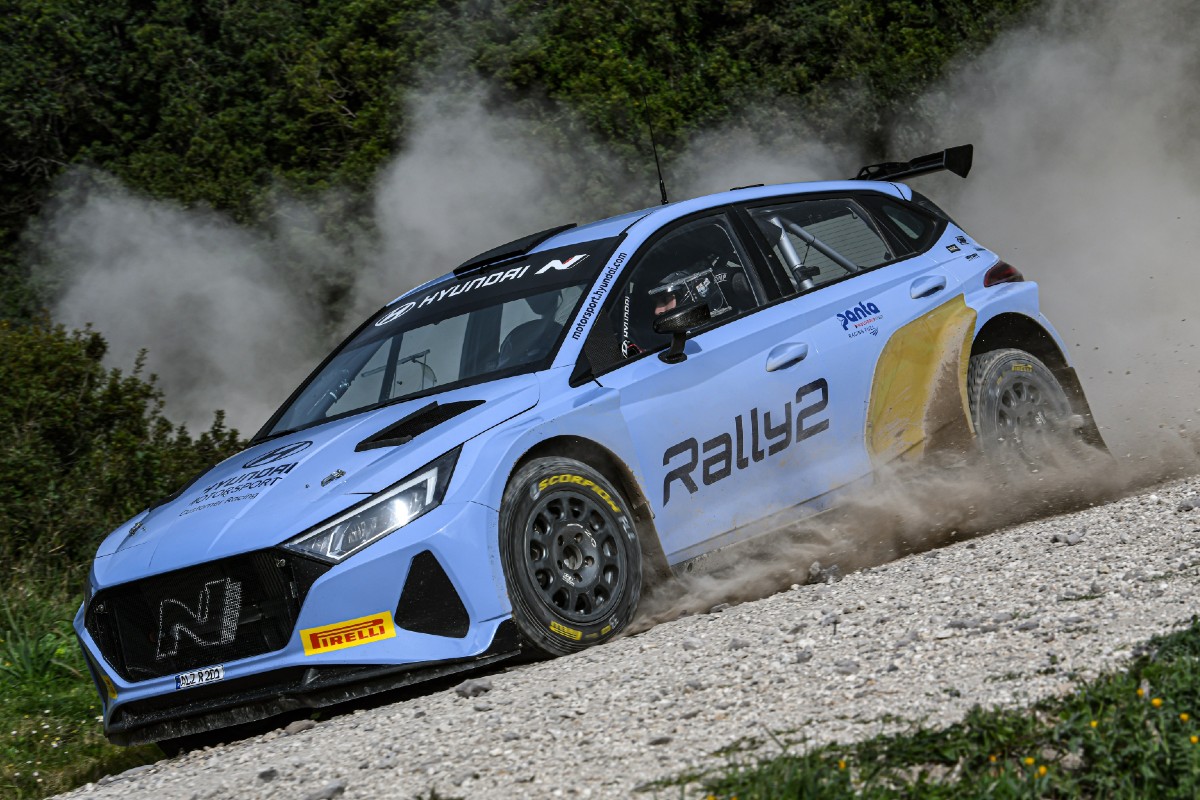 This customer racing car shares key elements in common with its road-going sibling, including a 1.6-litre turbocharged engine. The i20 N Rally2 does get all-wheel drive and a sequential transmission, but the aero kit is similar enough that the family connection between the road and rally cars is easy to see.

Hyundai has squeezed a 1.6-litre turbocharged four-cylinder petrol engine under the bonnet, the same engine found in the i30 N Line. In the i20 N it’s been given a special “flat-power tune” that means power and torque has been made available over the broadest rev brand possible. 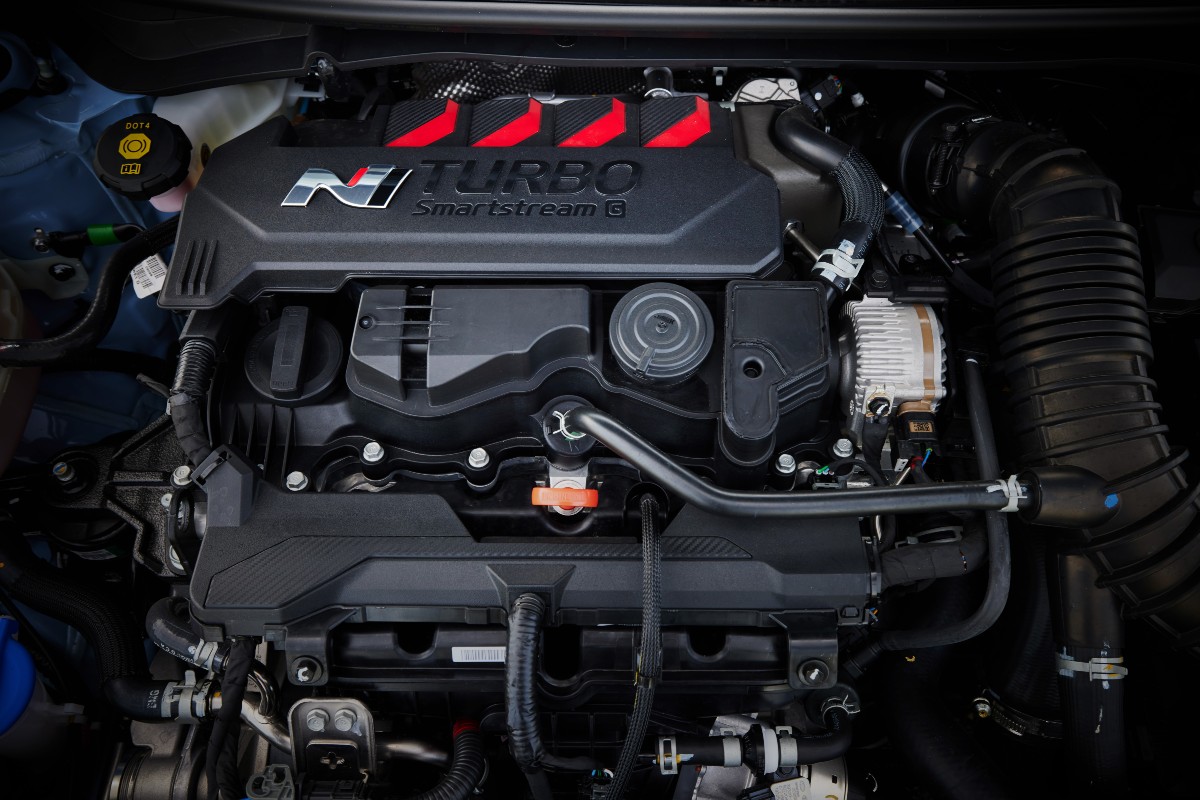 It’s paired with a six-speed manual transmission and sends power to the front wheels through a mechanical limited-slip differential; as opposed to the electronically-controlled LSD in the i30 N.
It’s a classic hot hatch set-up – punch engine, manual ‘box and trick diff – and it translates to a familiar driving experience on the road. It does what you expect a hot hatch this size to do – feel quick without blowing you away with its straightline performance (for example, 0-100km/h takes 6.2 seconds).

READ MORE: How Hyundai has earned a performance car following

Get the engine on boost and it will launch forward with purpose and make all the right noises doing it. There’s plenty of induction noise to know this little car means business, and there’s plenty of bark from the exhaust.

The gearbox is nicely suited to the car, with well-spaced ratios and a short throw, but it also comes with a handy tool – rev-matching. This is a similar system found in other modern manuals, which uses the car’s computer to automatically blip the throttle on down changes to ensure a smooth shift without needing to heel-and-toe. It’s a nice extra to have and certainly comes in handy when you find yourself swapping cogs in a hurry.

However, the lack of an automatic option is surprising, given this engine is paired with a seven-speed dual-clutch auto in the i30 N Line, and it will ultimately ensure the i20 N remains a niche proposition because of the limited appeal of manual cars these days.

Someone in the Hyundai N marketing department came up with the term ‘corner rascal’ to describe the driving character of its models. While it’s a silly phrase it’s also an accurate one, because the i20 N is most at home when you find some twisty corners. What made the original i30 N so impressive wasn’t its outright performance – that’s the easy part of making a hot hatch – but its fun, engaging nature that made the driver feel special. The i20 N retains that feeling with its sharp, responsive and direct character.

Through a series of snaking bends the i20 N has the ability to flow from one corner to the next with poise thanks to its compact dimensions – it’s only 4075mm long and has a wheelbase 70mm shorter than the i30 N.

As with its bigger sibling the i20 N gets adjustable drive modes which can alter the engine response, exhaust note, stability systems and steering feel. To adjust these settings there’s a ‘drive mode’ button on the centre console and a pair of blue ‘N’ buttons on the steering wheel that can be programmed to swap between the various modes and two customisable settings you can choose yourself.

In its most dynamic setting the steering is nicely weighted, direct and provides meaningful feedback so you can place the car exactly where you want it.

If there’s a weak link in the i20 N handling package it’s the ride, with the combination of the sporty-tuned passive dampers, Torsion beam rear axle and short wheelbase resulting in a fussy, busy ride at times. It’s by no means a deal-breaker but it does mean the i20 N will feel more taxing on long drivers compared to the bigger, more composed i30 N. 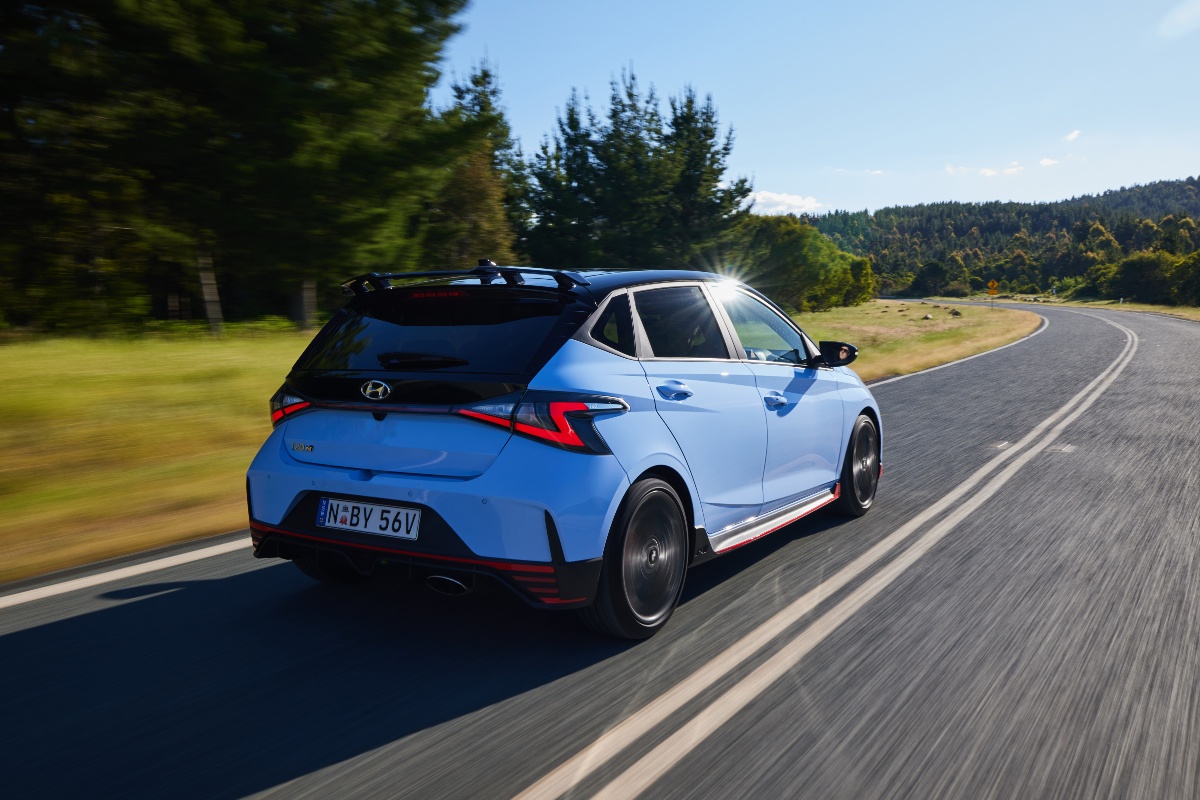 Given the recent history of the i20 WRC and now i20 N Rally 2 it seems appropriate to want to see how it handles itself on a special stage – ideally a gravel one. It’s a nimble and responsive car so it should be at home sliding around on loose surfaces and the engine has plenty of grunt to pull you out of slippery corners.

The other obvious answer would be a racetrack and the good news is we’ve done that, so check back soon for our more in-depth Track Test.

Credit to Hyundai for listening to the criticism leveled at the first-generation i30 N for its plain cabin and improving the design and presentation on each new model. Even though this is the only i20 available in Australia, the unique N Performance touches leave you in no doubt you’re in a special car. 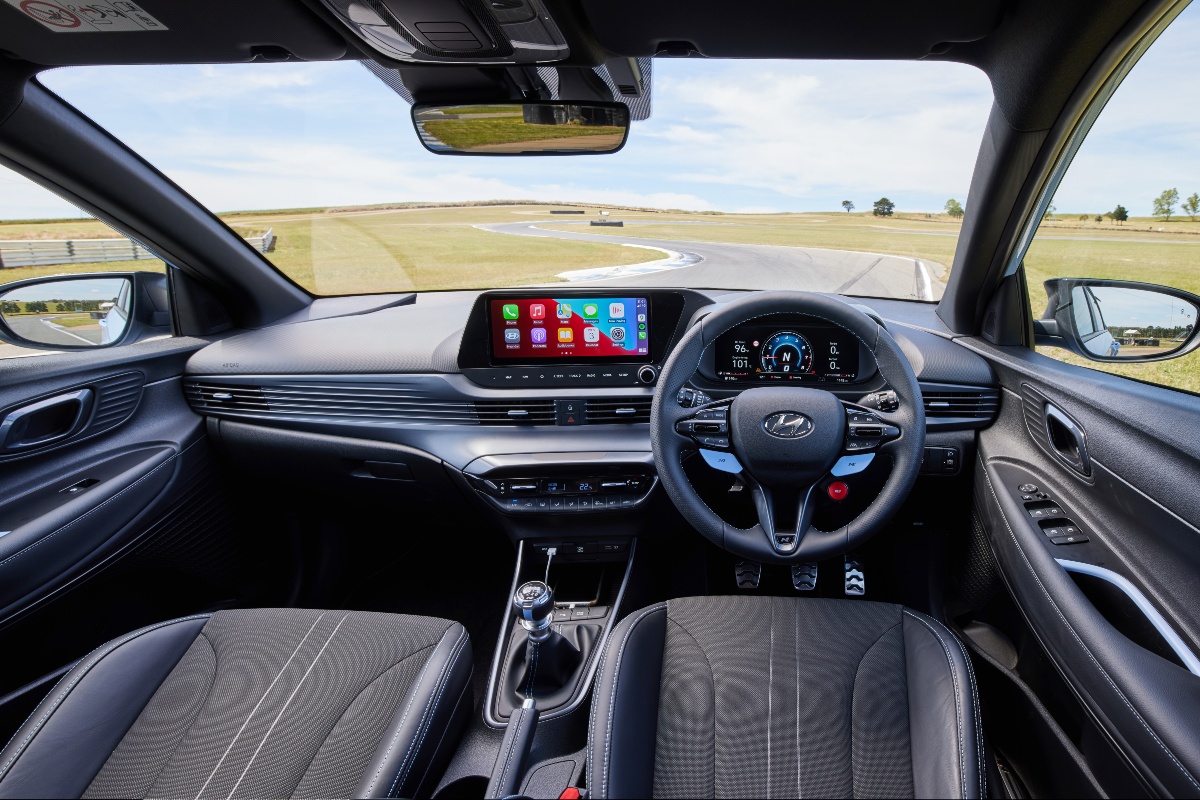 For starters there’s the thick-rimmed, leather-wrapped steering wheel complete with ‘N’ and ‘Rev-Matching’ buttons. Behind the wheel is a 10.2-inch digital instrument display, which is matched by an infotainment screen the same size.

It’s an excellent cabin with the right combination of sportiness and sophistication to suit the audience this hot hatch is aiming for.

In terms of space it’s very much a city-sized car, with ample room up front but limited space in the rear. Although the boot measures a generous 310-litres, so it does have some level of practicality. The i20 N is priced from $32,490 (plus on-road costs), which isn’t cheap for such a small car but is unquestionably good value for one with so much performance and standard equipment.
It’s natural competition are similar in price – with the Fiesta ST starting at $32,290 and the Polo GTI priced form $32,890.

The i20 N is also available with the option of a two-tone paint job, with a black roof available across five of its six body colours; although that does at $1000.

This is a very hard question to answer because the Fiesta ST is one of my favourite hot hatches – and the i20 N isn’t any less impressive. Hyundai hasn’t tried to reinvent the wheel with only its second performance car, instead it has followed the same formula and tried to do the best possible job it could. The result is a pint-sized, pocket rocket that feels fun to drive, which should be the priority with a car like this.

I’d certainly be happy to park one in my garage on a permanent basis – it’s a little cracker.

2021 Hyundai i20 N price and specifications