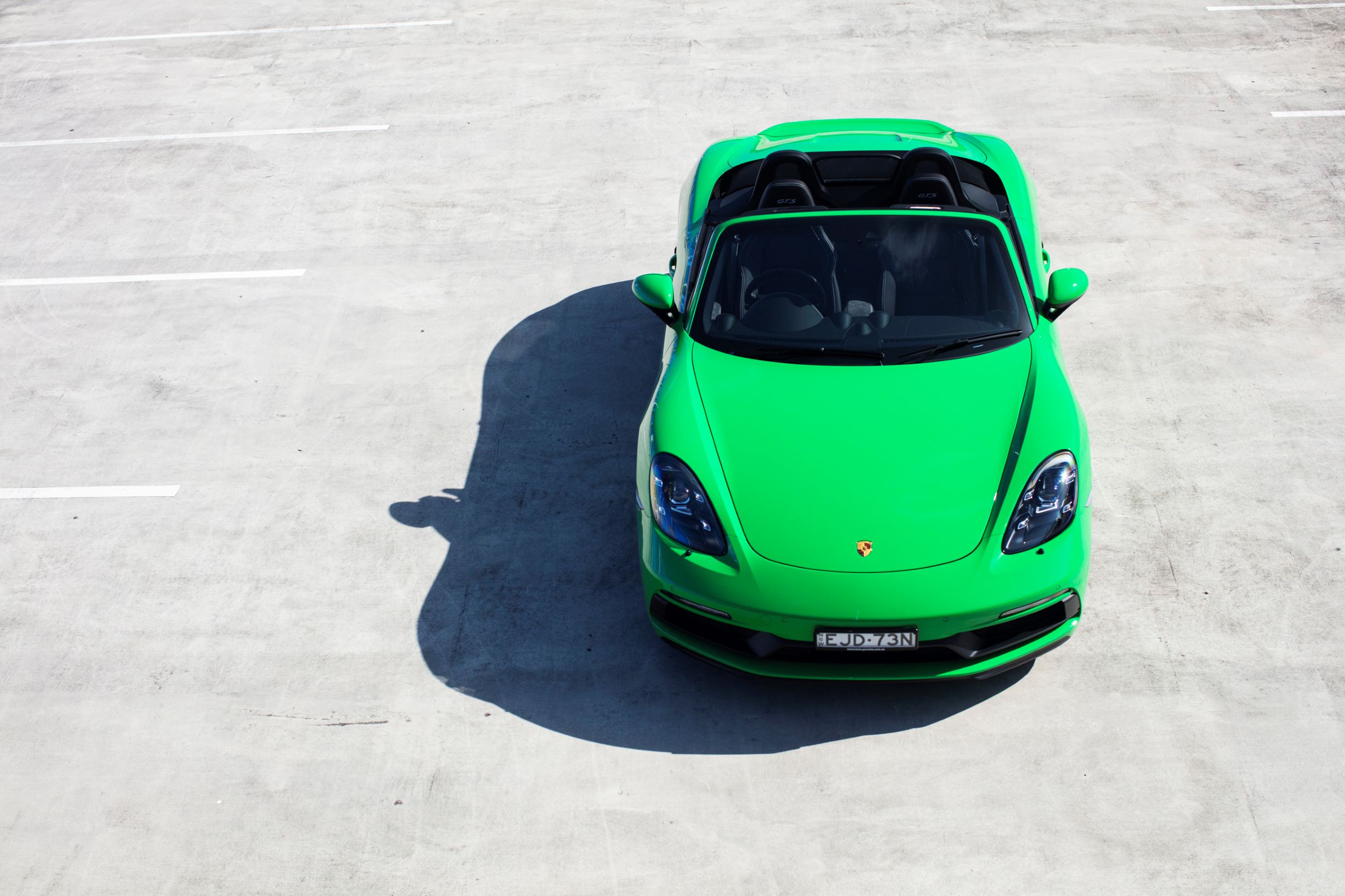 Porsche’s baby sports car has grown up. For those who still see the 718 Boxster as the ‘poor man’s 911’ the latest addition to the range should finally convert even the most ardent 911 supporters.

That’s because at the heart of this new 718 Boxster GTS is the same 4.0-litre flat-six found in only the finest 911s. And instead of hanging it over the rear axle, the Boxster mounts it in between the wheelbase, like a proper sports car. Which raises the question – has Porsche out-done itself and made a sports car better than the 911?

One of the reasons the 911 has always been a bit more special than the Boxster is because it races. It is the only production model Porsche officially uses in competition, be it GTE, GT3 or Carrera Cup competitions. 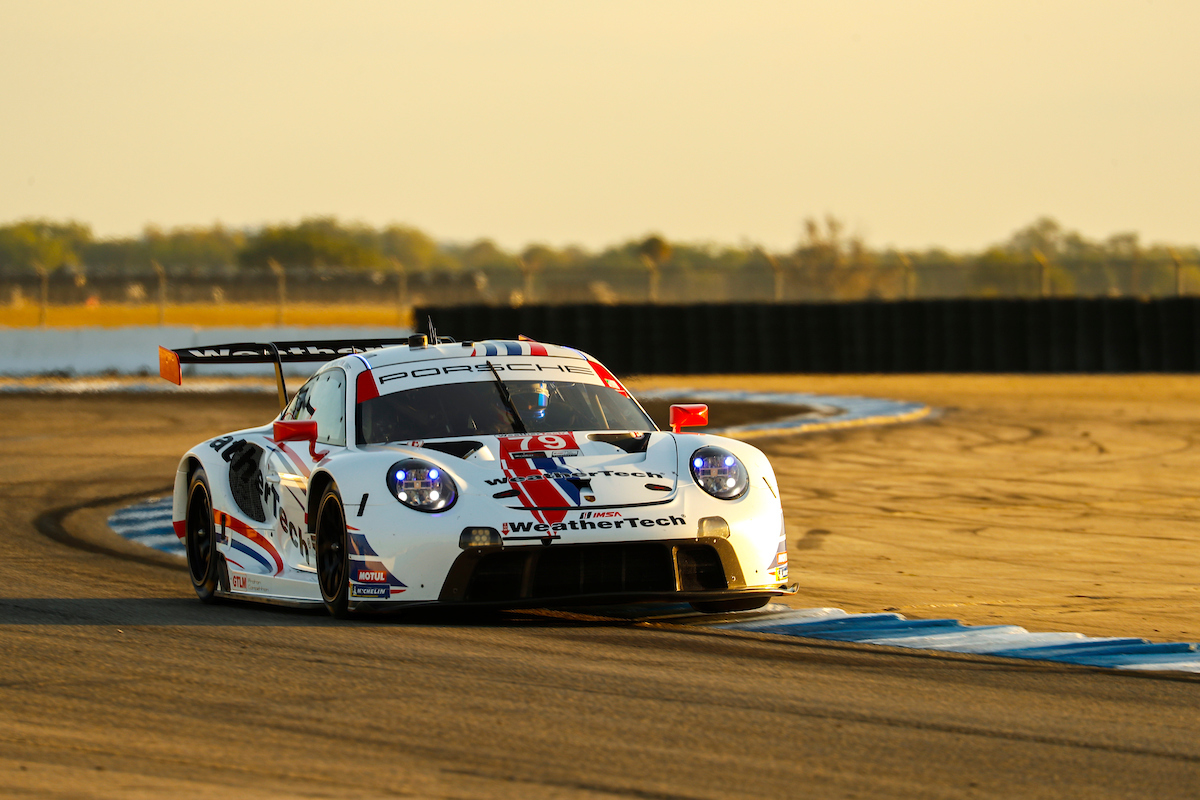 The reason why the 4.0 is so ubiquitous amongst Porsche’s most special models is because it’s the last of its kind – it’s the last remaining naturally-aspirated engine the company makes. The regular 718 uses a turbocharged 2.0-litre flat-four and the majority of the 911 range (excluding the GT3 and Turbo models) use turbocharged 3.0-litre turbo flat-six, primarily because emissions regulations have forced Porsche’s hand. 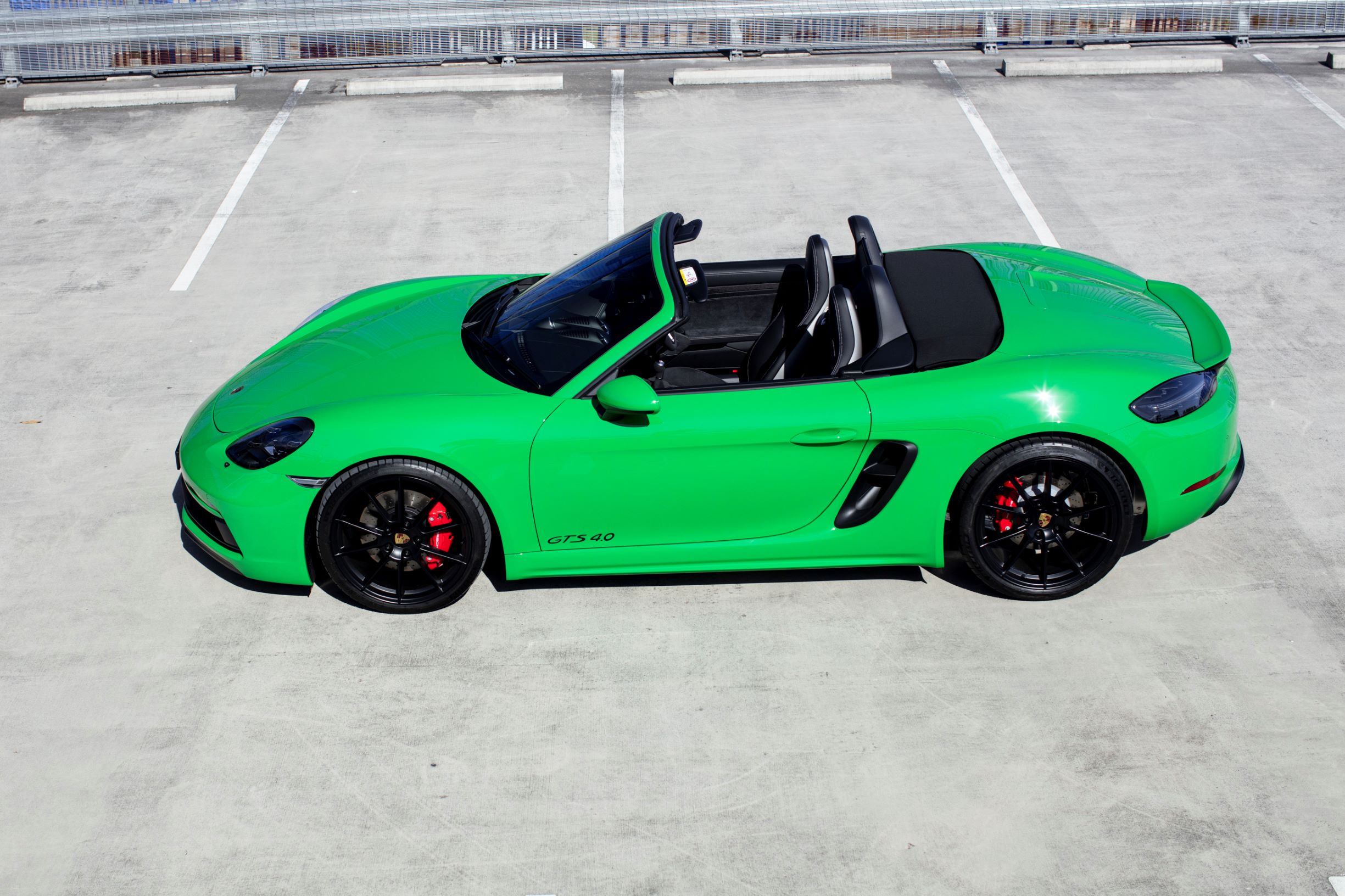 While the engine is the same fundamental powerplant used in the 911 GT3 and 718 GT4, it gets a unique tune for the Boxster GTS 4.0, making slightly less power in order to create some separation between the various models. But that doesn’t mean it’s lacking performance, making 294kW of power and 420Nm of torque; compared to 309kW/430Nm in the 718 Cayman GT4.

Not only is it the last naturally-aspirated engine Porsche has, but it’s also one of the last great N/A engines available today. It’s the kind of engine that driving purists crave. And to make it even more appealing to enthusiasts, Porsche pairs it with a six-speed manual transmission.

It is, quite simply, an awesome engine. It’s super flexible, with a broad spread of performance across the rev range that builds to a crescendo as you head towards the 7000rpm redline, or you can leave it in second gear and it will run from as slow as 50-60km/h all the way to the national speed limit without fuss.

As we’ve previously experienced in the GT4, the gearing is tall in this transmission (in large part because it too is the last of its kind in the Porsche parts catalogue), which means it doesn’t feel quite as engaging as it could on the road at times, simply because you don’t have to work the ‘box as hard as you otherwise could.

The GTS 4.0 is also fitted with a redesigned exhaust system that features a ‘flap control’ that allows the engine to breathe more freely and make a fantastic sound while it does so. It’s that classic flat-six sound that is synonymous with the German brand.

The GTS is designed to be a driver’s car that’s best enjoyed on the open road, sitting between the sporty S and track-capable GT4/Spyder in the 718 line-up. It fills that brief and then some, providing the kind of handling that would be at home on the track, with so much grip and precision from the chassis you feel like you’re driving a race car. 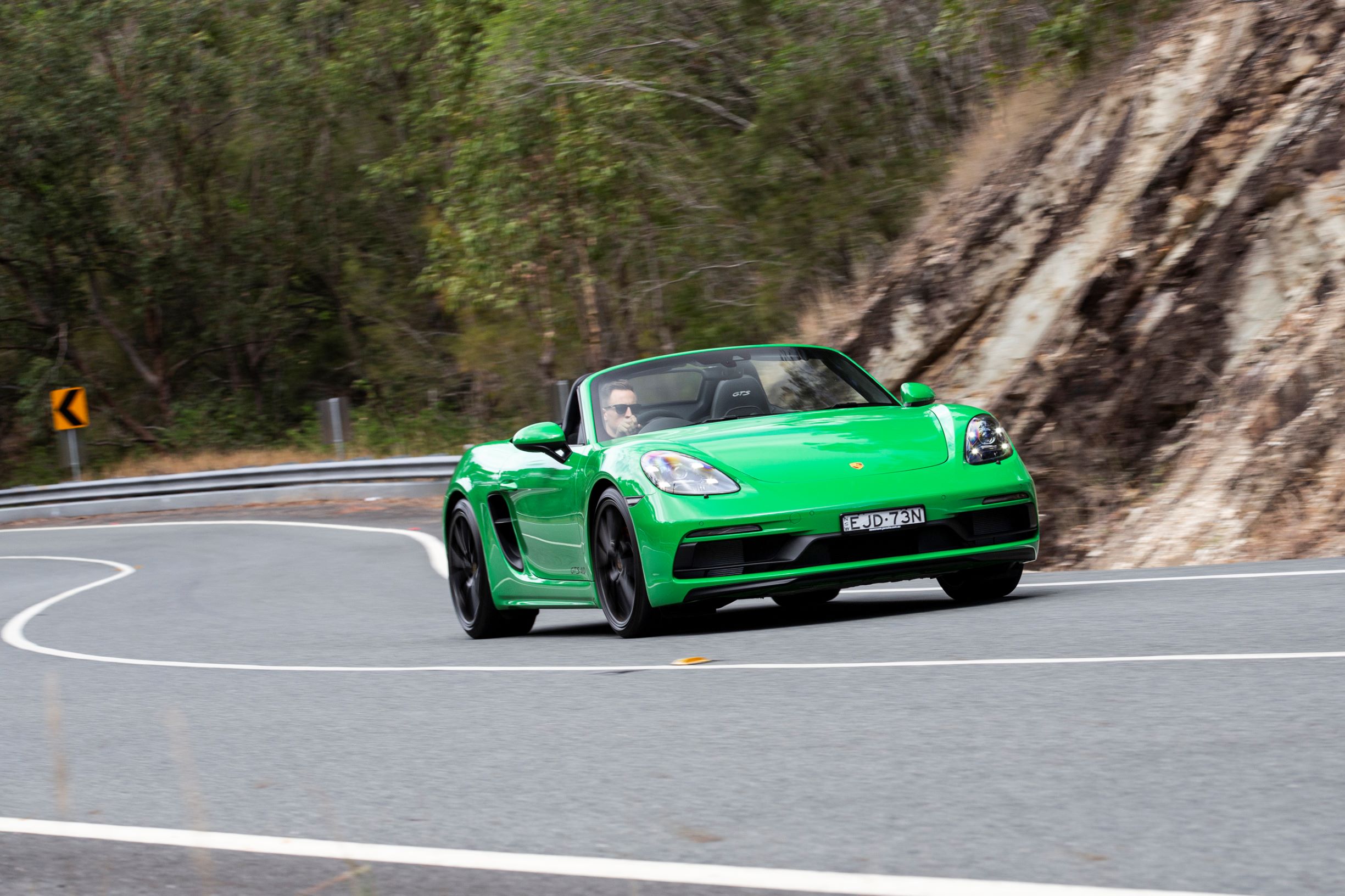 The net result of all these systems is a car that sits incredibly stable on the road, with excellent road-holding, controlled suspension and direct steering which makes for a car that’s hugely enjoyable to drive because it’s both responsive and engaging. 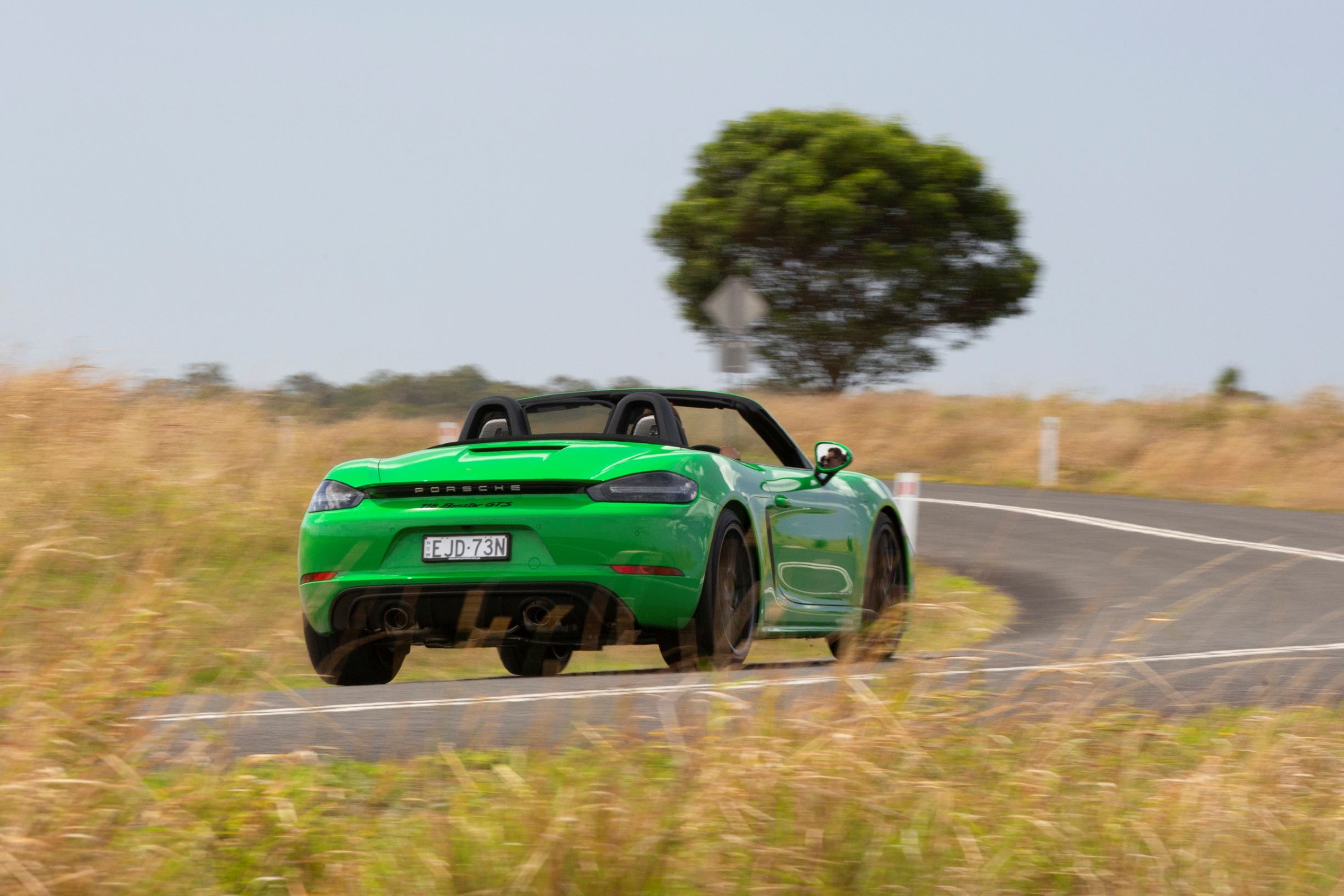 This is a car that enjoys being pushed hard through corners, and when you do think you’re finding its limits it reveals it has plenty up its sleeve. Quite simply the 718 GTS is too quick for the road, its true limit is well beyond what you should safely do in public and yet you can still have massive amounts of fun driving within itself.

Anywhere. The 718 GTS is so good it would be hard to find a road it wouldn’t excel on. While a racetrack would be an obvious answer, particularly a fast one with a long straight to allow you to really wind up the engine, that’s really the domain of the GT4. Instead, I’d love to drive the GTS on a winding mountain road, let the engine push itself up a climb and test the chassis precision with a series of shaking bends.

The two words that best sum up the cabin design are purposeful and sporty. It still has that level of luxury you expect from a Porsche, but there’s a definite dynamic quality to it with plenty of Alcantara trim, most notably on the steering wheel. The seats are another highlight, also trimmed in Alcantara and offering both support and comfort when you’re behind the wheel.

While the convertible 718 Boxster may not be the obvious choice for a driving purist, there’s very little to choose between it and the Cayman on the road. For those who do enjoy the open-air driving experience the Boxster is a very easy to live with convertible, with solid insulation with the roof up and only minor buffeting from the wind at speeds above 70km/h.

Not only is it good value for money for a Porsche, it might be the best value for money sports car on the market today. The 718 Boxster GTS 4.0 is priced from $178,000 (plus on-road costs), which is significantly cheaper than 911 Carrera (from $241,300) but you get the 4.0-litre engine that elevates it beyond the entry-level 911 in pure driving terms. 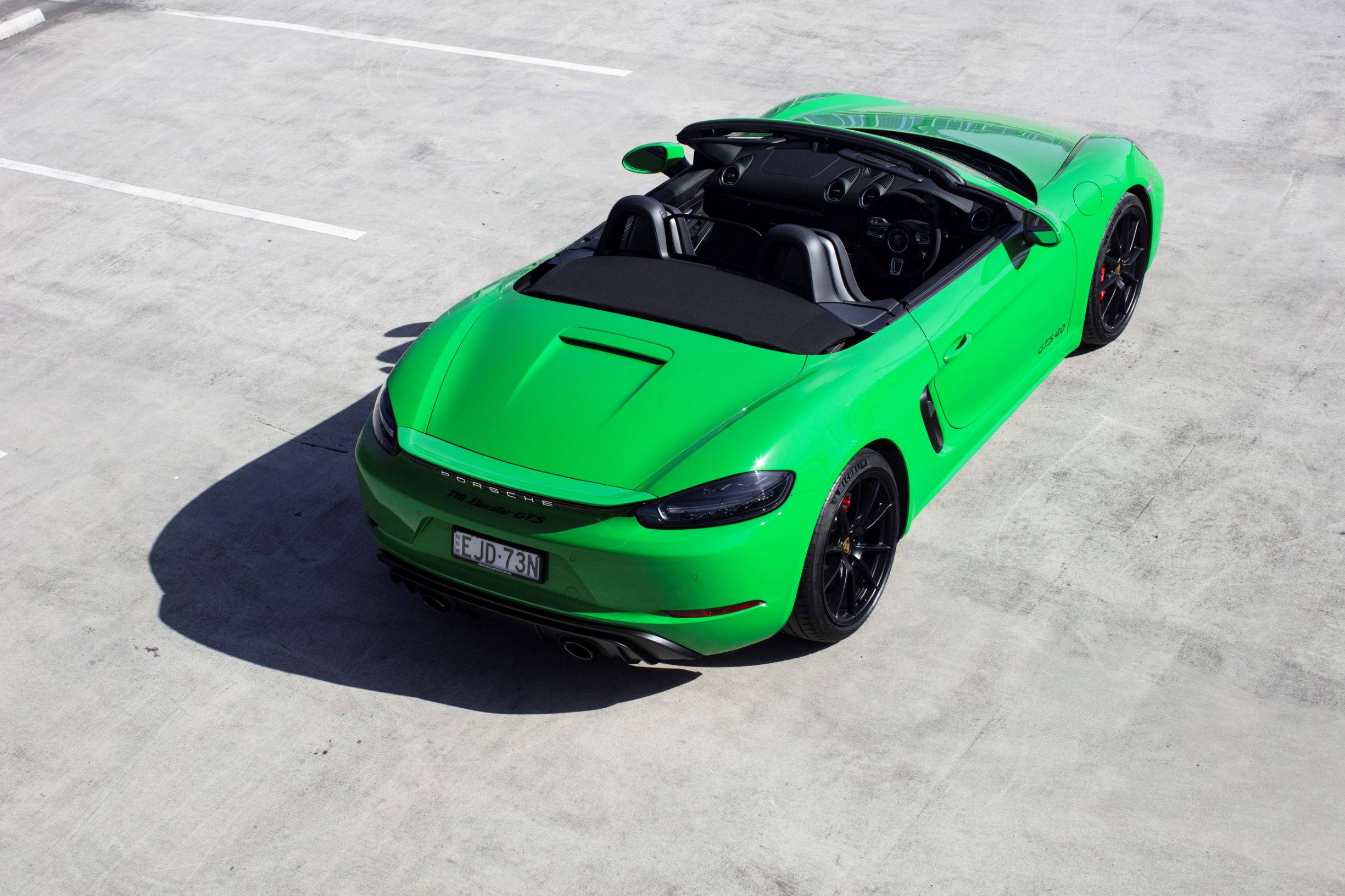 I began this review questioning whether Porsche had out-done itself with the mid-engined 718 packing the 4.0-litre flat-six. Obviously the 911 will always remain the benchmark sports car, not only of the Porsche range but of the class in general. Its combination of performance, dependability and everyday useability makes it the yardstick by which the competition is measured.

But the 718 Boxster GTS 4.0 measures up very well whichever way you look at it; it’s really fast, hugely capable on the road, looks sharp and is great value for money. I certainly wouldn’t be brave enough to say it’s ‘better’ than a 911, but I would have to think long and hard before I chose a 911 Carrera over the 718 Boxster GTS 4.0.