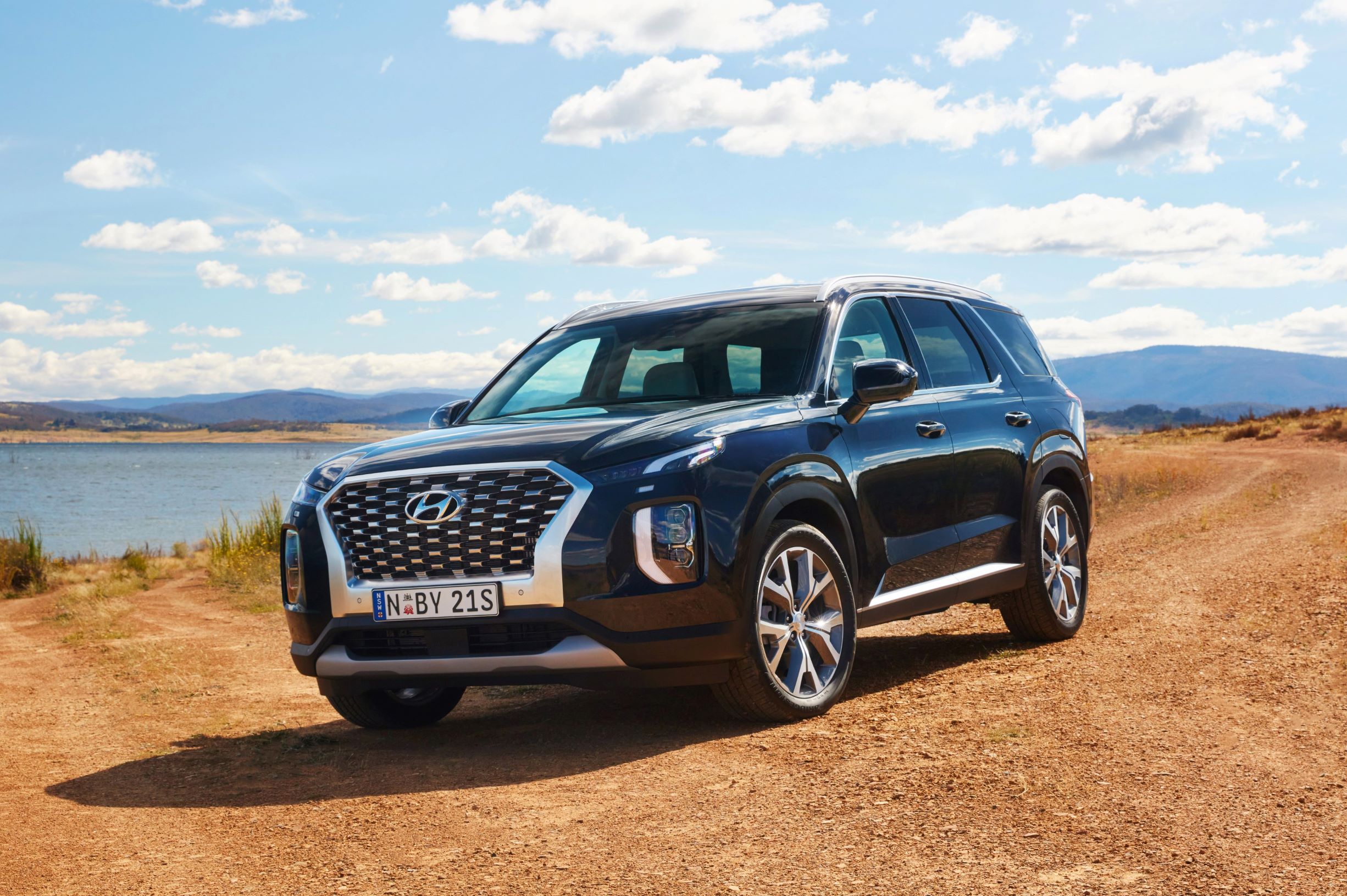 The most American car on sale in Australia today; ironic given that it’s from a South Korean car maker. The Palisade may be built by Hyundai but it’s the closest thing you can buy to the quintessential American upper large SUVs like the Ford Explorer and Chevrolet Traverse both in terms of style and space.

This is the biggest member of the Hyundai family, sitting above the Santa Fe, with space for up to eight or seven in comfort. This is the type of SUV designed to appeal to big families but it also helps to bridge the gap between mainstream and luxury brands – offering the kind of comfort and space you typically need to spend more on.

While Hyundai has been increasing its involvement in motorsport over the past two decades and has been ramping up its N performance sub-brand in recent years there isn’t any real connection between its TCR or WRC campaigns and the Palisade. 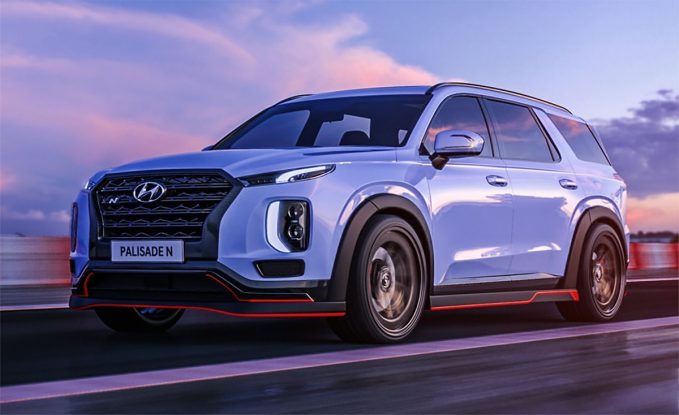 N performance did just launch its first SUV, the compact Kona N and the company’s bosses haven’t ruled out larger performance SUVs, possibly including the Palisade, should the market demand it.

There are two engine choices for the Palisade, a 3.8-litre V6 petrol or 2.2-litre four-cylinder turbo diesel. Our test car was fitted with the latter, which sounds small for such a sizable vehicle but in practice does a solid job of motivating the SUV. 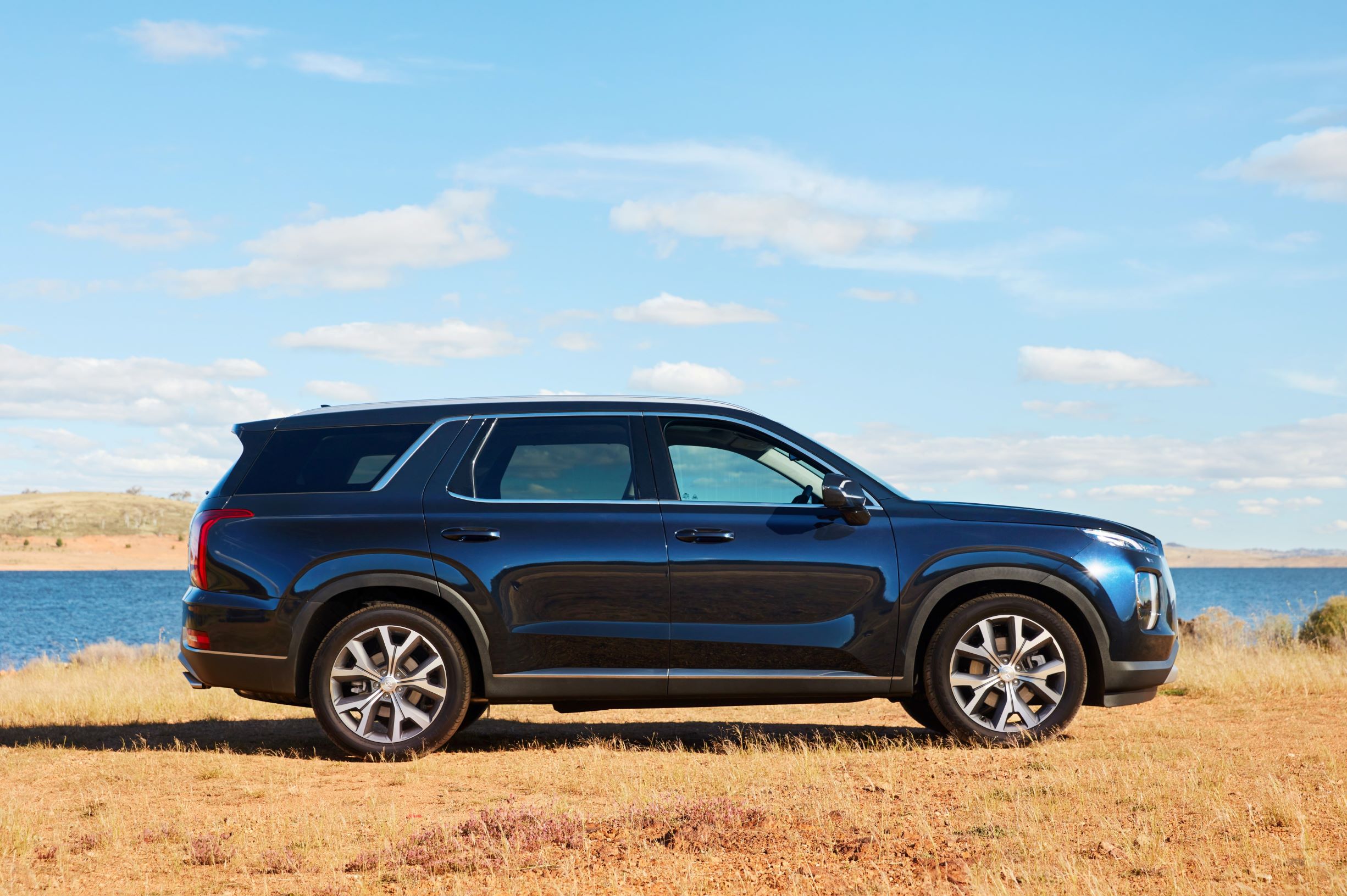 It makes a modest 147kW of power but a punchy 440Nm of torque (which compares to 217kW/355Nm from the petrol engine). That torque is the key to the Palisades brisk performance, offering strong pulling power off the mark and through the mid-range, which means it performs nicely for such a big vehicle.

The other strength of the diesel – and why you’d pick it over the V6 petrol engine – is fuel consumption. The official claimed combined urban/country cycle return is 7.3-litres per 100km, which is an impressive but hard to achieve figure. Even with a long highway trip to Dubbo we couldn’t match the claim, but hit 8.0L/100km which is a good figure for a full-size, eight-seat SUV.

The way it handles could also be described as American in nature. That is to say it feels big, heavy and floaty (because it is all those things) but thankfully it’s also controlled and predictable which makes it a comfortable SUV to drive. 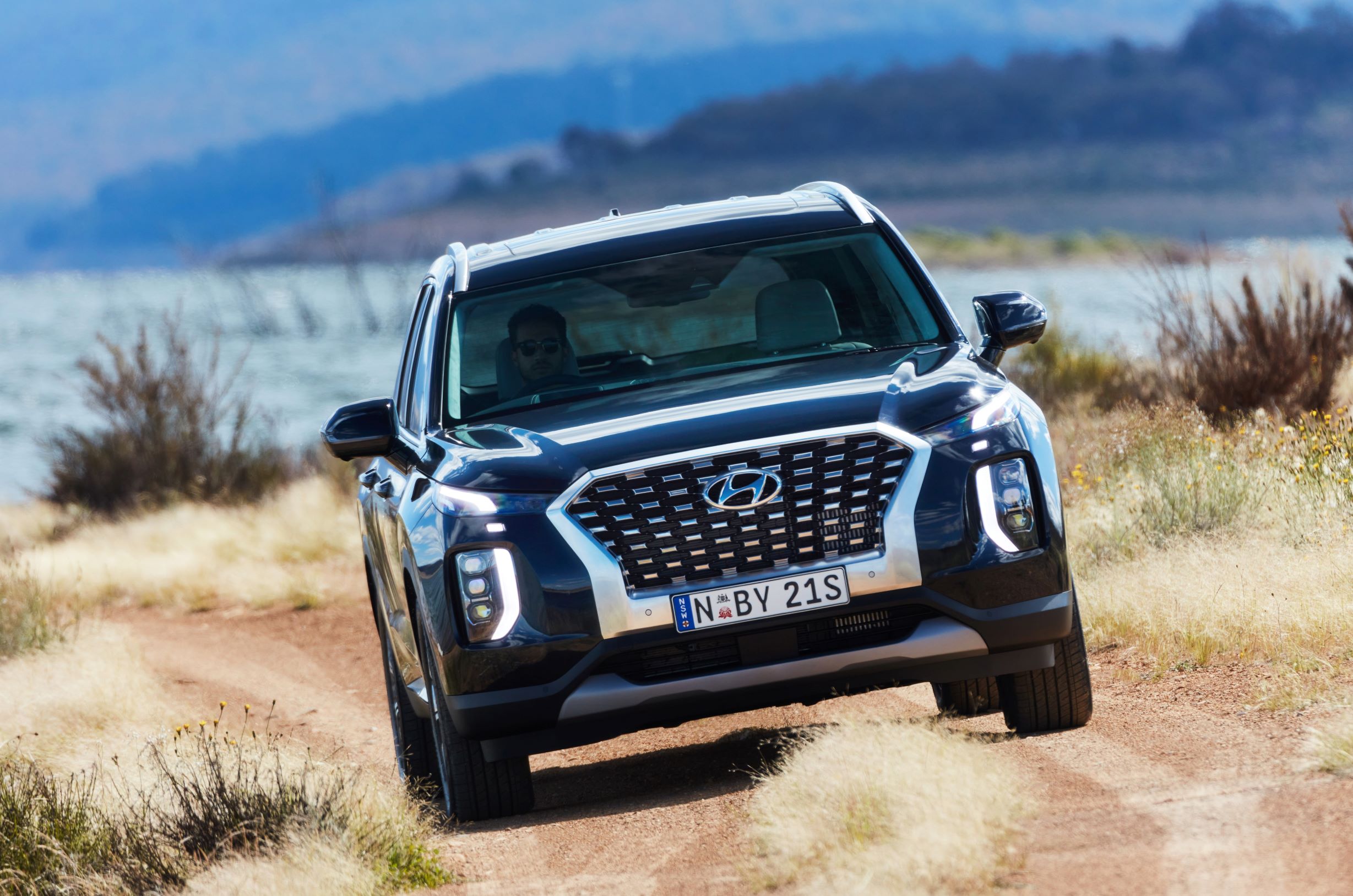 In fairness it’s probably more resolved in its handling than your typical ‘Yank Tank’, with responsive and direct steering and suspension that lets the body lean but stays steady.

If you’re buying the Palisade for its prowess in the corners, you should probably be looking at a smaller SUV that handles better. But for what it is, it does an admirable job.

The Palisade was an ideal chariot for my road trip to Dubbo, in regional New South Wales. From a driving point-of-view its relaxed demeanor and comfortable ride made it easy to soak up long distances without feeling taxes.

Its spacious cabin – which I’ll detail in a moment – also makes it an ideal vehicle for a road trip. It can accommodate an entire family and their luggage without feeling cramped.

To call it spacious is arguably an understatement, because the Palisade is cavernous inside. This is a legitimate eight-seater, with room for teenagers or smaller adults to sit comfortably in every position (although the third row is a squeeze with three). Although, if you don’t need to carry eight or just want more room, Hyundai does offer a seven-seat layout which replaces the second row bench with a pair of captain’s chairs. 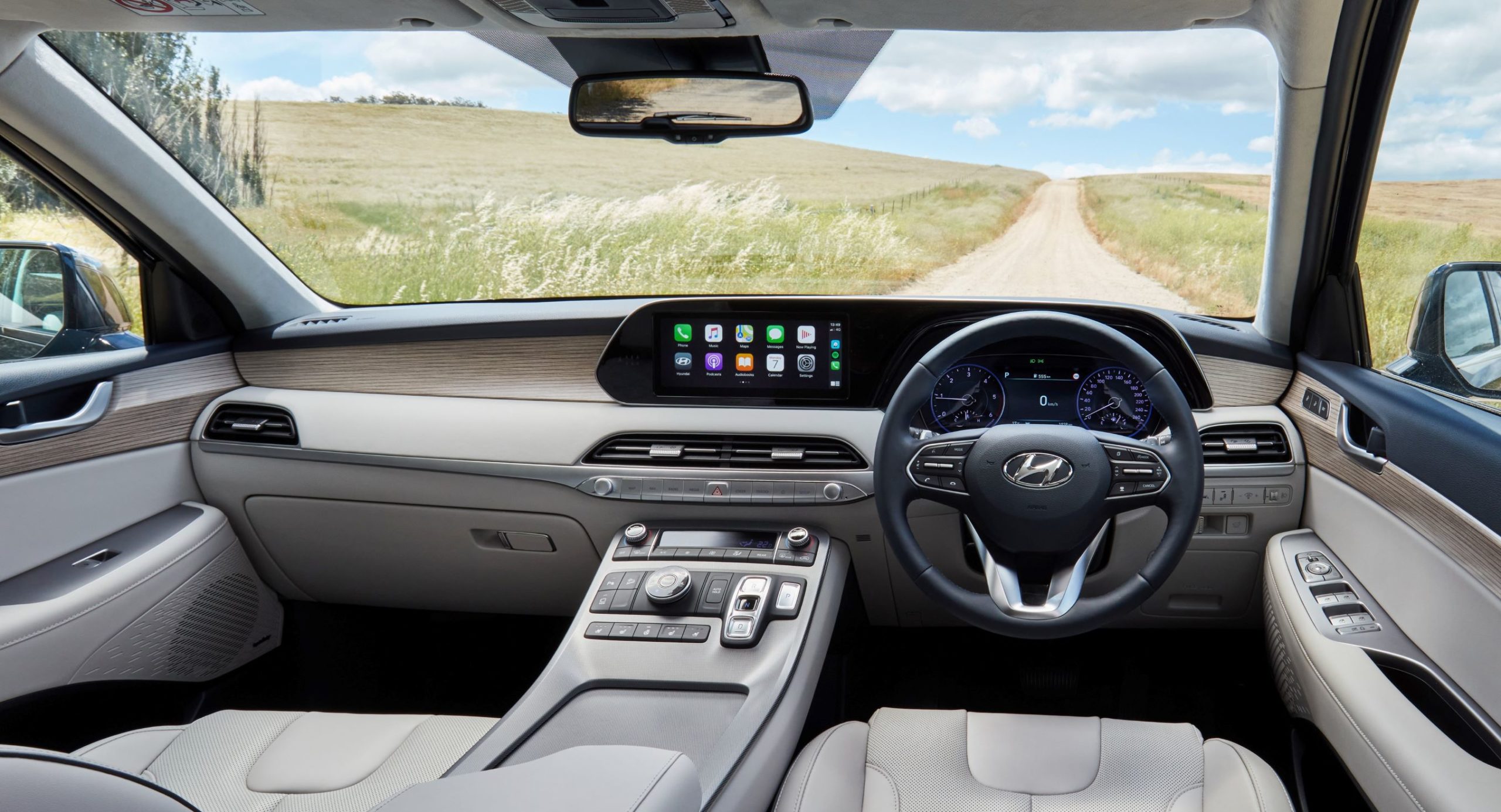 It’s a well-appointed cabin, with an obvious focus on premium touches to help justify its price tag. All the seats are leather-appointed and there’s air-conditioning to all three rows.

Up front there’s a 10.2-inch infotainment screen that incorporates not only the typical functions like navigation and Apple CarPlay/Android Auto, but also some unique elements that prove useful. Like the ‘Quiet Mode’ which can turn off the rear speakers and limit volume through the front speakers in order to let the kids relax in the back while the parents can enjoy their music. 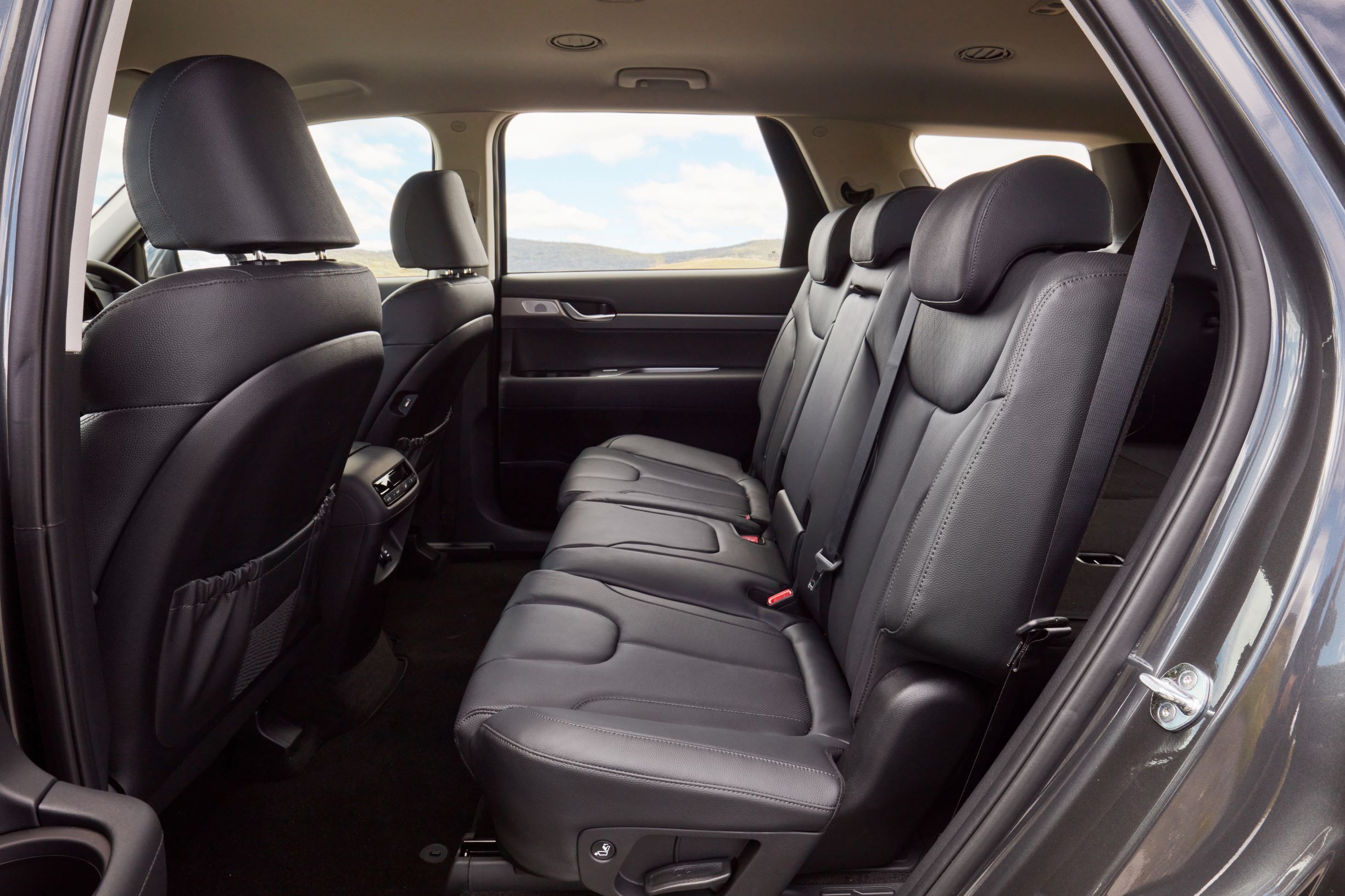 Another special infotainment option is Hyundai’s ‘ambient sounds’ which are a range of pre-recorded noises that can run through the stereo to, apparently, relax you on your journey. There’s the sound of rain, waves lapping on the shore and rainforest noises, which are all fairly relaxing. However, the ‘open-air cafe’ is the sound of clanging plants and background chatter, while ‘snow’ is reminiscent of nails scratching a blackboard – so it’s a bit hit and miss.

Hyundai has also thought practically, and there are a whopping 16 cupholders spread around the cabin to ensure everyone can have two drinks at a time. There’s also USB ports carefully positioned – such as the pair that are built into the back of the front seats, which allows your rear passengers to stay fully charged. 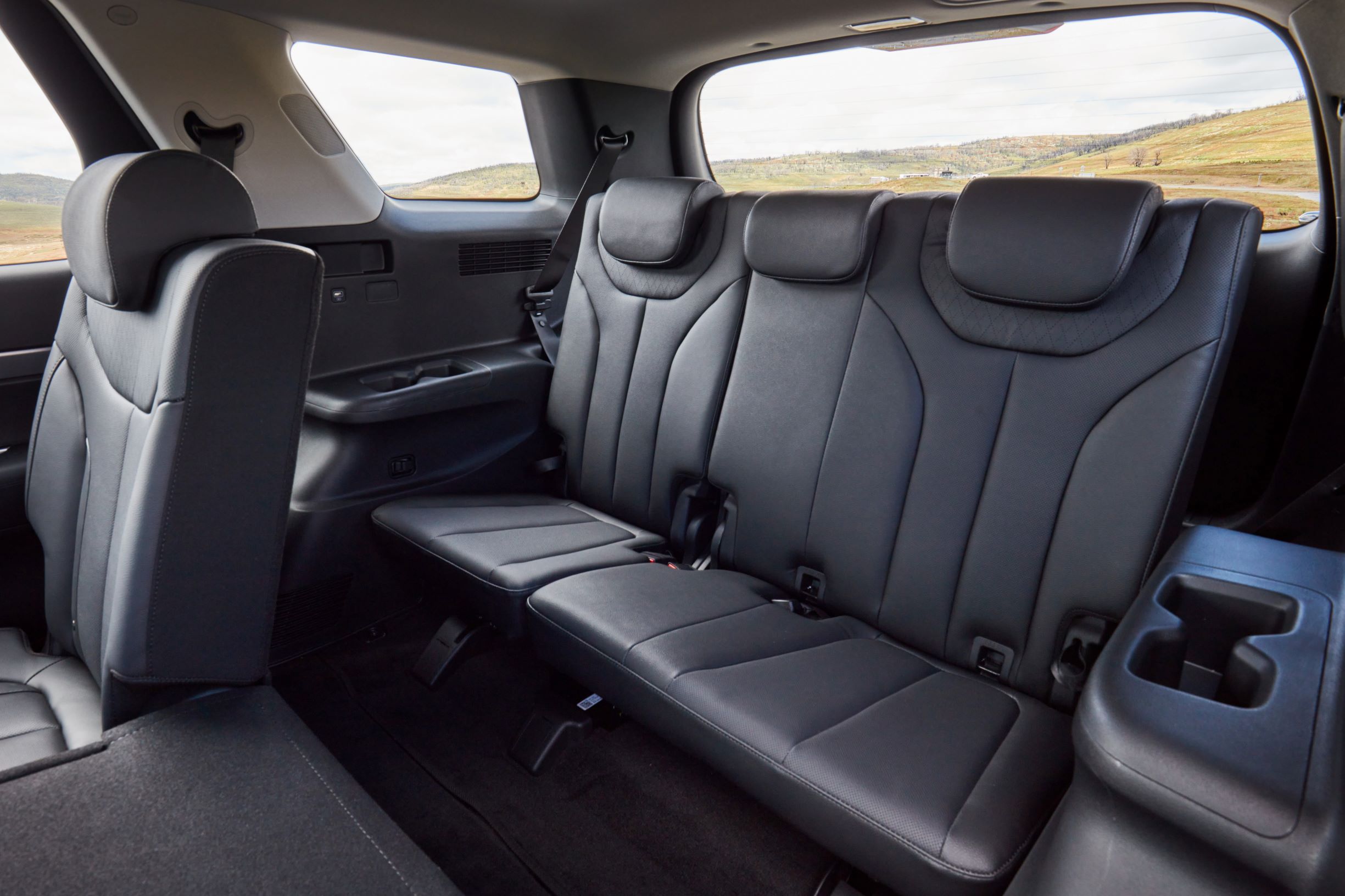 The starting price for the Palisade diesel is $64,000 (plus on-road costs), which makes for a strong value argument when you consider the amount of vehicle that money buys you.

There are actually few obvious rivals, at least in the SUV space, that seat eight; but plenty that take seven. The catch is, most of the Large SUVs that cater to the off-road crowd, like the Toyota Prado, Ford Everest and Isuzu MU-X. While it may be a ‘Yank Tank’ in concept, Hyundai has refined the Palisade into something more drivable and liveable. It may not be the most engaging SUV to drive, but it more than makes up for it with space, practicality and comfort that makes it the ideal transport for a family or even your race crew.