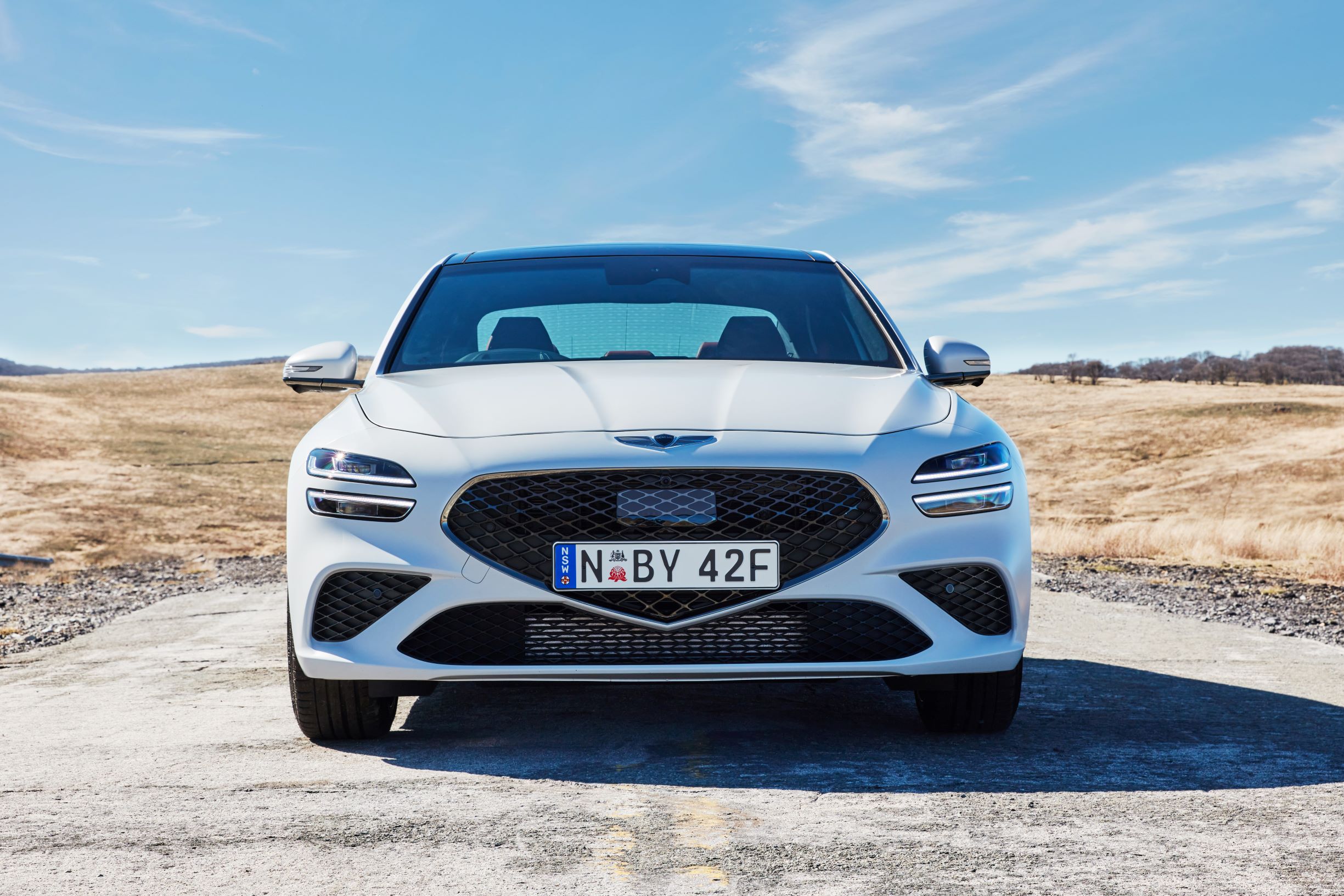 This mid-size luxury sedan has been given a makeover to bring it inline with the newer models in the range, but underneath it remains relatively unchanged. As we’ve written before, the G70 is a Kia Stinger in a tuxedo, using the same rear-wheel drive underpinnings as the sports sedan to create a car that can compete with Germany’s finest.

The most significant change for this 2021 model is the exterior design, with the G70 being overhauled with Genesis’ ‘Athletic Elegance’ design language to match the newer G80 and GV80 models. That means there’s a new, large ‘Crest’ grille and the brand’s now signature quad lights, both at the front and rear.

Genesis hopes this will compete with the likes of the 3-Series, Audi A4 and Mercedes-Benz C-Class, but given the dominance of the German trio on the prestige market the realistic target for the G70 should be pinching sales off the Lexus IS, Alfa Romeo Giulia, Jaguar XE and Volvo S60. Genesis hasn’t had a chance to get involved in racing yet, having only been spun-off as its own brand in 2015. Obviously Hyundai has become increasingly involved in motorsport in recent years with its WRC and TCR programs, so if Genesis continues to grow there’s potential for it to hit the track in the future to compete against its in-market rivals such as BMW and Audi.

While the front end of the G70 looks different, what’s behind the grille is largely unchanged from last year’s model. We’re driving the range-topping 3.3T model, powered by a 3.3-litre V6 twin-turbo (the same as the Stinger), but there’s also a 2.0-litre four-cylinder if you don’t need some much power. 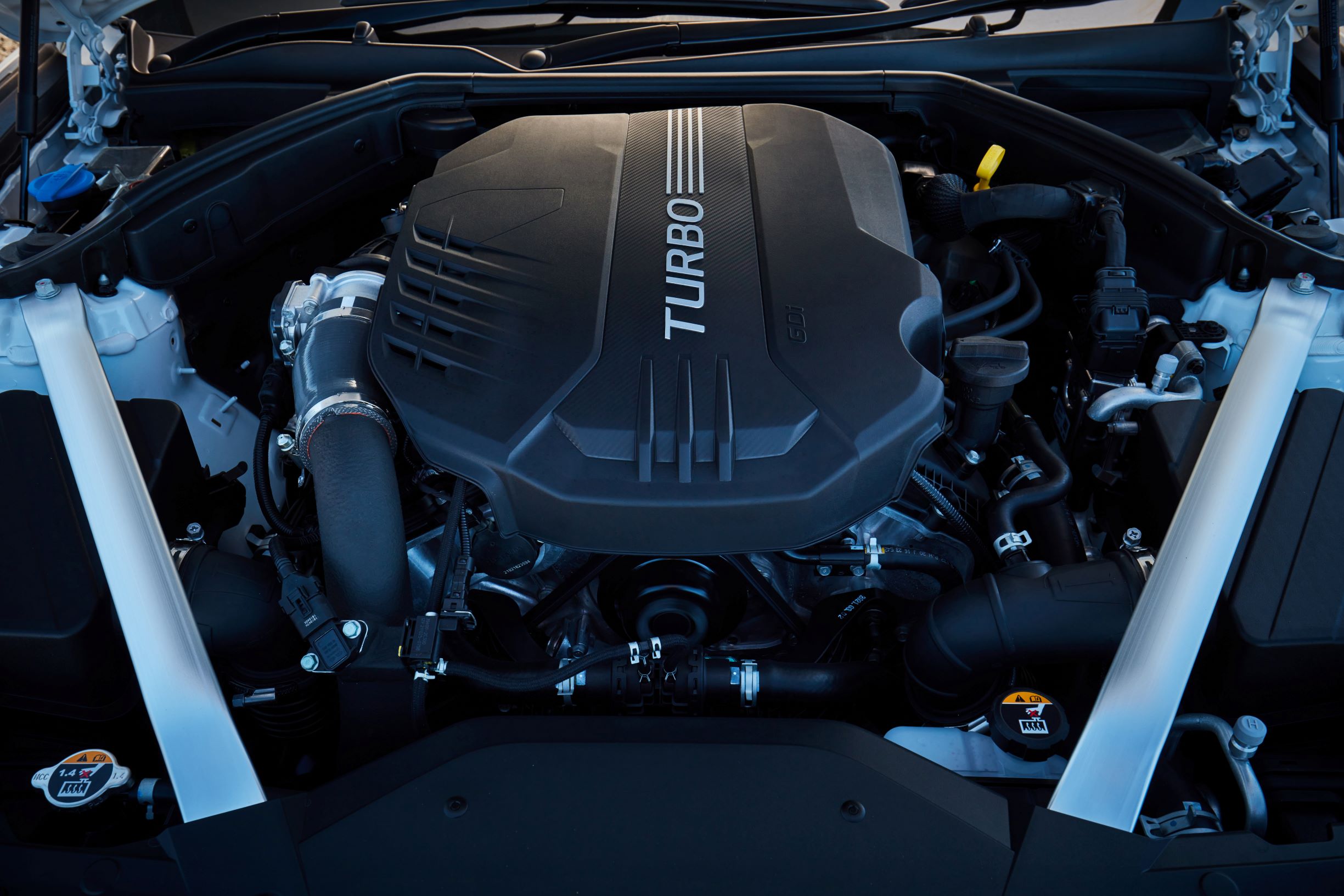 While the engine hardware is carried over, a new active variable exhaust has liberated an extra 2kW of power, so the 3.3T makes 274kW and 510Nm of torque. It’s paired to an eight-speed automatic transmission and sends power to the rear wheels via a limited-slip differential, to create a proper premium and sporty powertrain.

It offers plenty of punch when you put your foot down, providing the kind of easy performance you expect from a luxury car. It feels more refined than the Stinger thanks to better cabin insulation, but the new exhaust still helps produce a nice burble when you step on it.

To give it a unique character from the Stinger the G70 was given its own chassis and suspension tune by the Hyundai/Genesis team. That has also been carried over from the previous model, which is a good thing because it’s a nice set-up that not only gives the G70 its own personality but is also well suited to Australian roads. 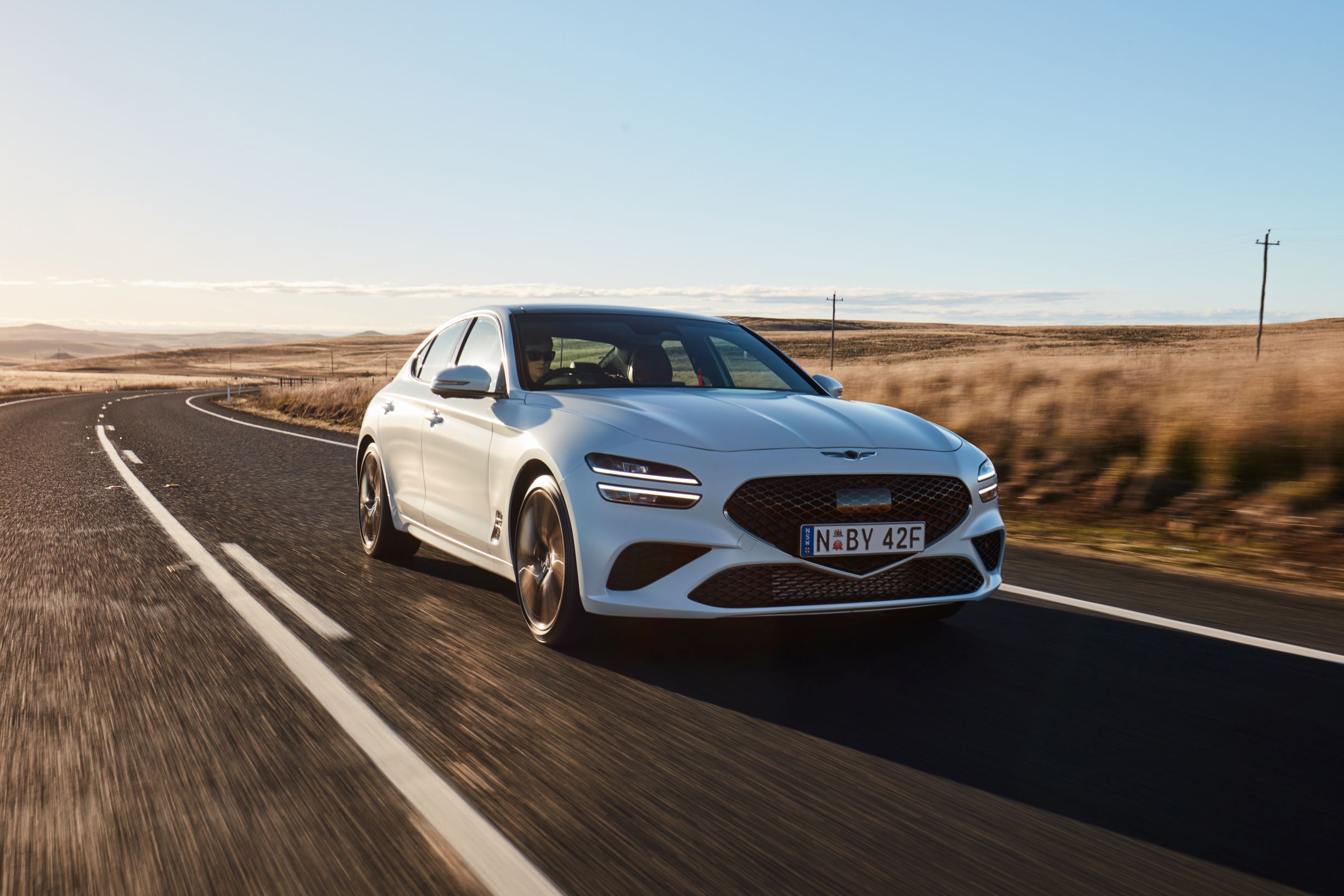 The 3.3T comes standard with Genesis Adaptive Control Suspension (GACS), which combines Electronic Control Suspension (ECS) with Dynamic Stability Damping Control (DSDC). The net result of all these acronyms is an adaptive suspension set-up that can be altered via the drive mode dial in the cabin.

There’s a ‘Comfort’ setting that softens the dampers for a cushioned ride, but there’s also ‘Sport’ and ‘Sport+’ settings that stiffen the shocks and increase the response of the electric power steering to produce a more dynamic character.

The handling is helped by the standard Michelin Pilot Sport 4 tyres, which wrap around 19-inch alloy wheels. 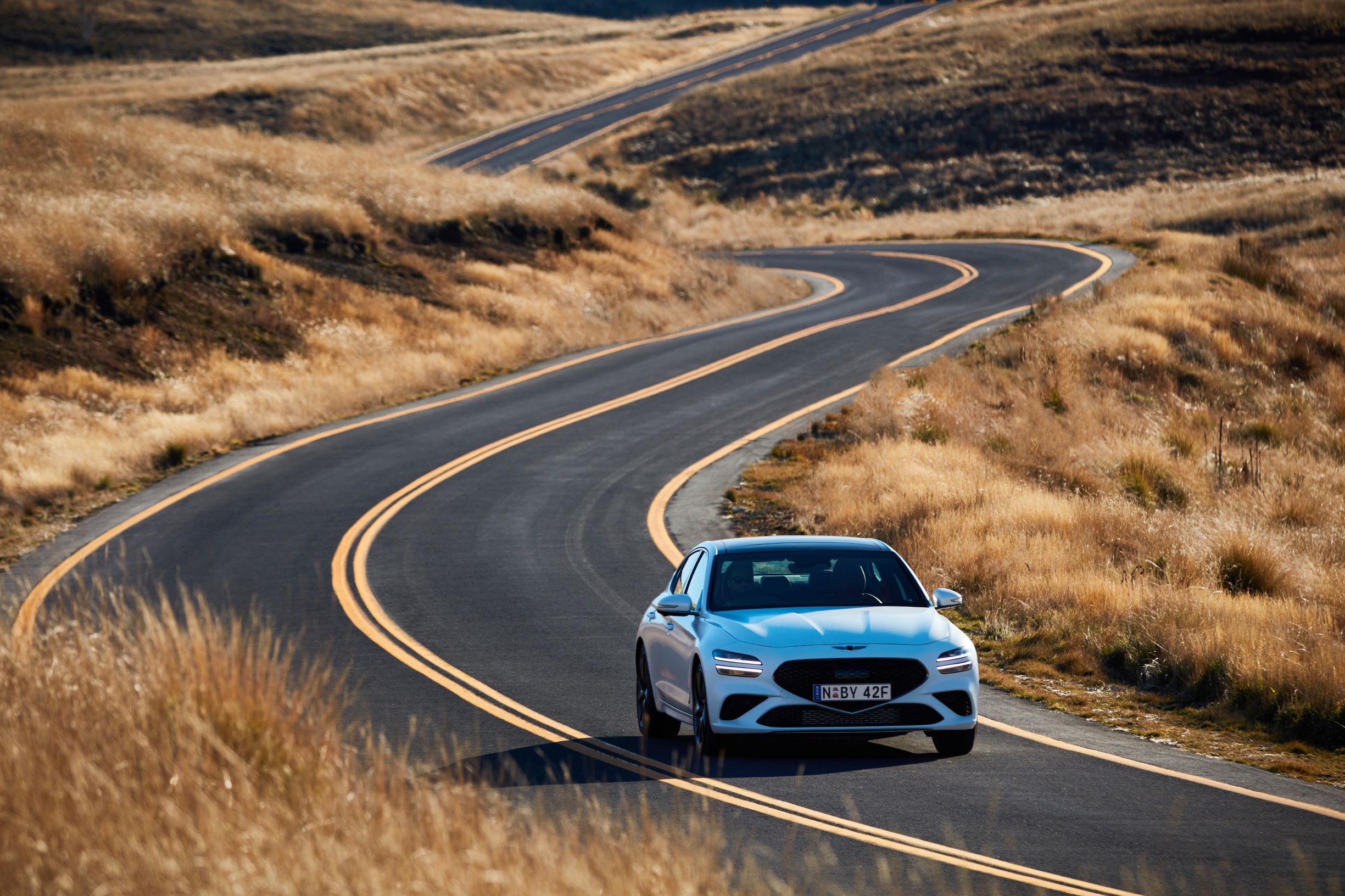 The G70 may have a twin-turbo engine and a Sport+ chassis setting, but it’s far from a track car. However, with its punchy engine and rear-wheel drive handling it makes for a pleasant open-road tourer. This is the kind of car that makes a drive down the Great Ocean Road or through the Gold Coast hinterland a relaxing but engaging journey.

One of our biggest disappointments with the pre-facelift model was the cabin, which felt too staid and traditional for an all-new luxury brand trying to make its mark. Unfortunately it’s hard to tell the difference between old and new because they’re almost identical. The only major difference is the new 10.2-inch infotainment screen that features an updated interface; the same as already rolled out in several Hyundai and Kia models. 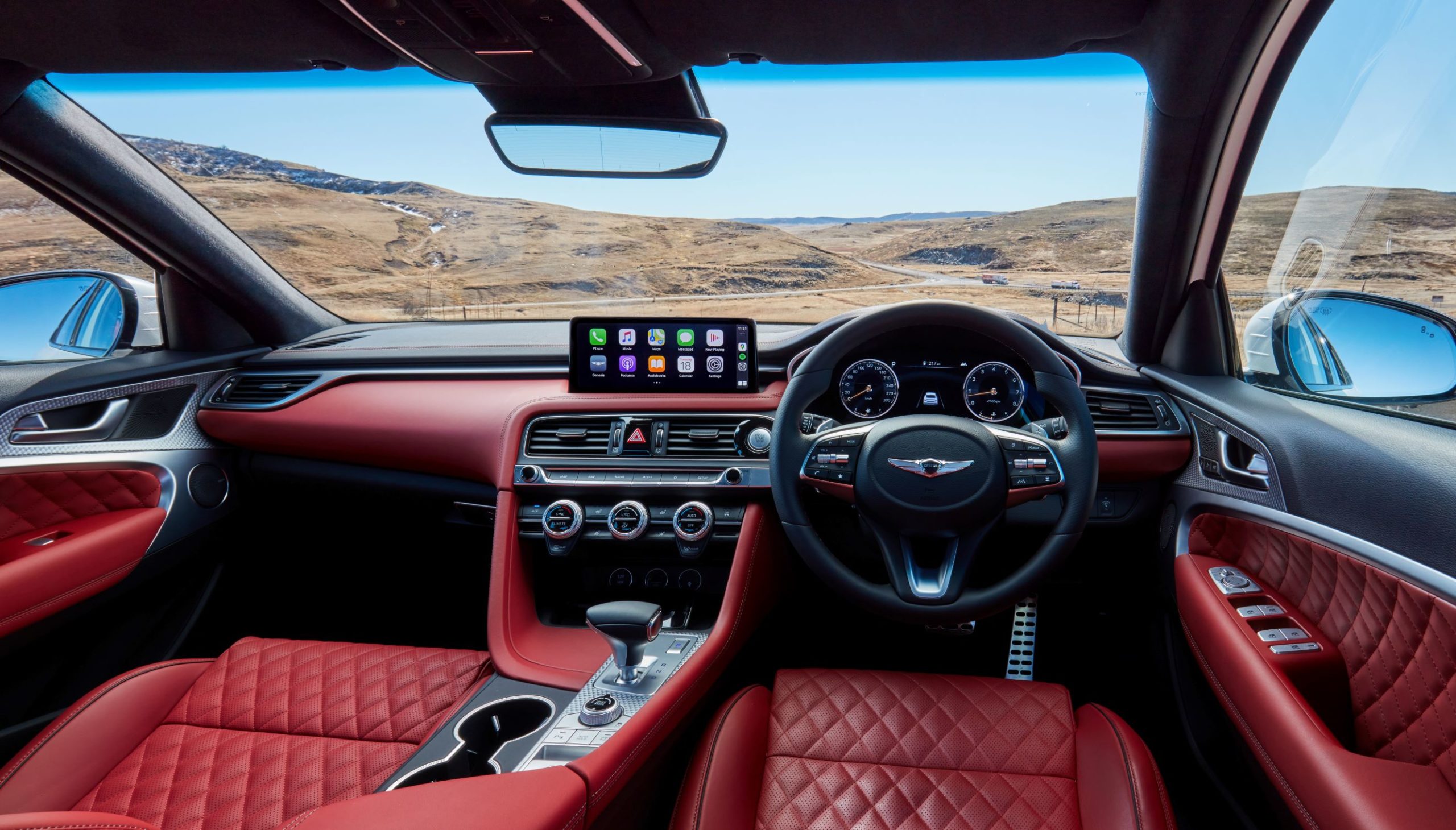 It’s a shame there wasn’t a bigger change, because the all-new G80/GV80 introduced a fresh interior design style to the brand that looks and feels more premium and helps Genesis stand out in a competitive luxury market.

While the standard model gets old-fashioned analog dials, you can upgrade to a new 12.3-inch digital instrument panel with the optional Luxury Package (which also brings sports pedals and more suede interior trim).

It’s still a very luxurious cabin with quality leather trim, but having seen the potential of the Genesis design team in the newer models it’s a shame more couldn’t be done to the G70. That’s not to say the G70 doesn’t have six-cylinder competition. The V6 Lexus IS350 F Sport starts at $75,000, which arguably makes it the biggest rival to the Genesis – both in terms of price and its position as a German alternative.

Genesis is trying to go the extra mile to entice customers, with its concierge service that’s designed to make owners feel special. As part of the concierge treatment the first five years of servicing are free, Genesis will pick up your car and leave you with a courtesy vehicle when it is time for service and drop your car back – so you never have to even visit the dealership. Although, that service currently only exists for buyers within a 70km radius of the Sydney, Melbourne and Brisbane CBDs.

Even though it makes a very strong value argument against the likes of Audi, BMW and Benz, people don’t just buy luxury cars based on money. There’s an emotional connection for a lot of people and as a new brand Genesis hasn’t really done anything to woo customers on that level. That’s why getting involved in motorsport and competing against its German rivals would make some sense. Perhaps an LMDh program to take on Audi and BMW at Le Mans and Daytona would help create some passion around the brand.

Judged on its merits alone, the way it drives and what you get for your money, I think the G70 3.3T at least deserves to be on your short-list if you’re looking for a luxury sedan.