Britain’s answer to the Porsche 911.

The German coupe is the benchmark by which all other sports cars are measured, thanks to its combination of performance, usability and value. It also sells in significant volume and generates sizable profits for Porsche, which is why every other premium brand has tried to build its own version – Audi R8, Mercedes-AMG GT, Jaguar F-Type, etc.

Aston Martin’s offering is the sleek and stylish Vantage. It’s a very different beast to the 911 in so many respects – it’s a front-engined, two-seat coupe which the Porsche is not – but in terms of performance, usability and value it’s right in the German model’s playground.

READ MORE: Why F1 is key to Aston Martin future

This latest Vantage was launched at the end of 2018, so it’s still quite fresh (especially when you consider the previous Vantage ran for 13 years, from 2005 until 2018) so it’s the ideal time to see how it measures up – both as an Aston Martin and a Porsche 911 rival.

Aston Martin is obviously making a splash in 2021 with its new Formula 1 team, but the brand has a long and illustrious history in sports car racing. Particularly in recent times, with both the DB9 and then Vantage regular fixtures on the Le Mans grid. So closely linked are Aston Martin and motorsport that there are four racing variants of the Vantage – GTE, GT3, GT4 and DTM. In fact, the road car and GTE version were developed simultaneously, with the two teams working hand-in-hand to ensure both versions could learn from each other.

In the 13 year lifespan of the old Vantage there were some major changes at Aston Martin. Most significantly, the brand went from Ford ownership to private hands (a consortium led by Prodrive chairman David Richards, that more recently sold to Lawrence Stroll), which meant some major technical changes.

Without Ford, Aston Martin needed new powertrains and turned to Daimler (which had a minor stake in the brand) for a supply of Mercedes-AMG’s 4.0-litre twin-turbo V8 to power the Vantage and other models. It gets the standard tune from AMG, which means 375kW of power and 685Nm of torque which is a suitable amount of performance for a serious sports car; although it’s worth noting that the AMG GT S has been updated to make 384kW/670Nm. While the Vantage also uses a Mercedes electrical system, the British brand uses a different transmission, sourcing an eight-speed automatic from ZF (rather than using the seven-speed dual-clutch gearbox from the AMG GT).

The combination of these two makes for the kind of effortless performance you expect from a premium sports car. The engine adds a surge of speed whenever you squeeze the throttle, with a sense of drama when you do with the V8 growling and barking with a different tone to what you’ll experience in the AMG GT.

Even though it’s a traditional torque converter transmission, rather than the more fashionable dual-clutch, the gearbox swaps cogs with purpose when you’re in the dynamic drive modes or if you’re using the huge metal paddle-shifters mounted behind the steering wheel. But equally, the auto can also cruise along with an ease that makes the Vantage a liveable, usable daily sports car just like the 911.

While the Vantage is powered by the same engine as the Mercedes-AMG GT, the two end up being very different beasts to drive thanks to their unique platforms. Aside from the engine and electronics, Aston Martin does the rest of the car itself and the chassis is an evolution of the bonded aluminium structure the company developed from scratch for the DB11 – that preceded the Vantage in this new era for the brand. 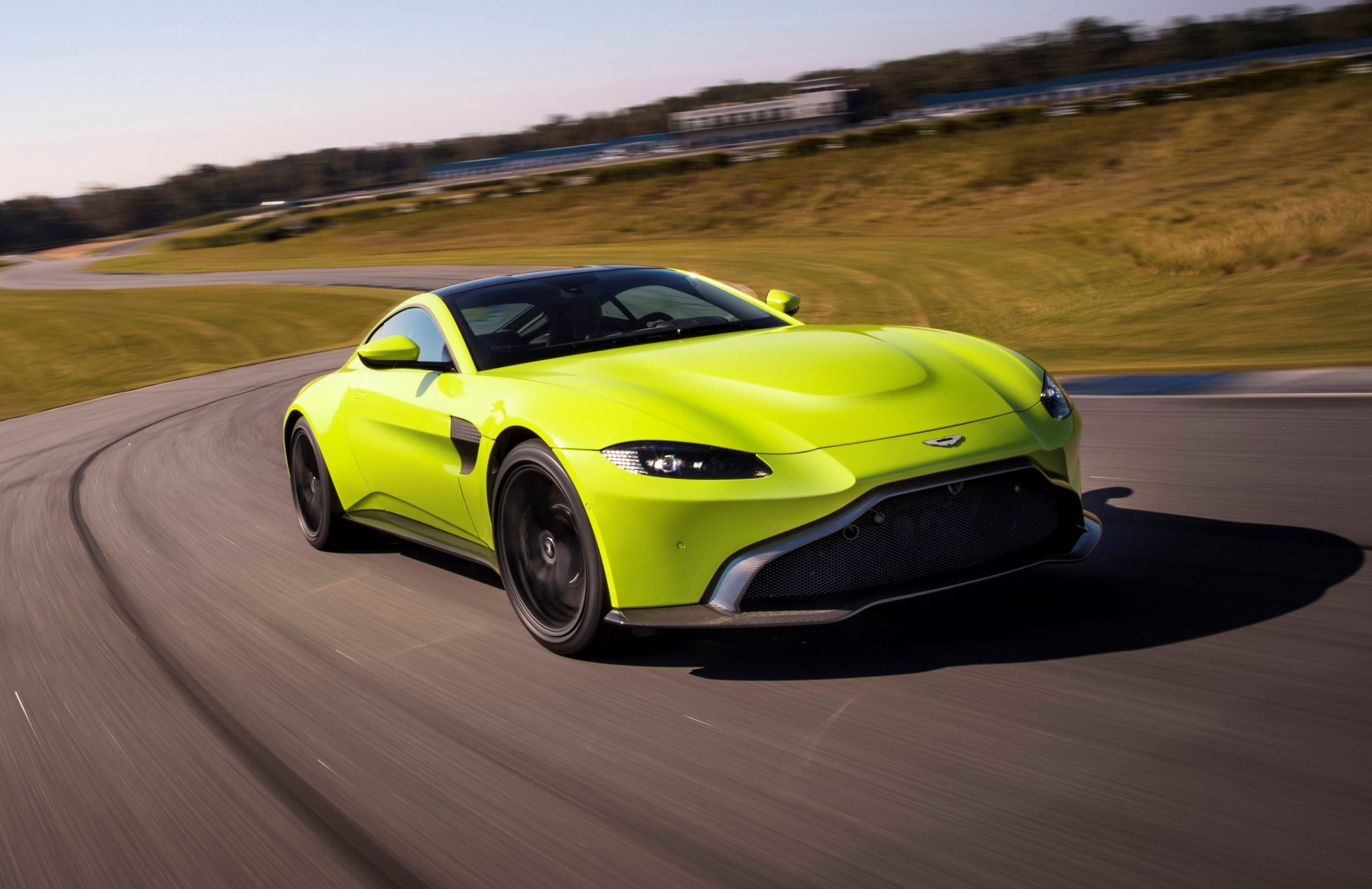 There’s also the latest development of the brand’s Adaptive Damping System, Dynamic Torque Vectoring and a new Electronic rear differential (E-Diff) that all combine to form an advanced handling platform that makes the Vantage an impressive sports car to drive.

The drive modes start with Sport and move up to Sport Plus and then Track, because a sports car shouldn’t bother with a ‘Comfort’ or ‘Eco’ setting in Aston Martin’s books, and we happen to agree.

The Vantage feels suitably responsive and precise when you throw it into corners, which wasn’t something you could say about the previous model (which was more of a blunt instrument). The steering is well sorted and provides meaningful feedback, allowing you to place the car with accuracy and confidence.

In turn, that allows you to push harder and with the support of the specially-developed Pirelli P Zero tyres you can explore the limits of the Vantage without worrying it will bite you. But that doesn’t mean it feels dull or predictable, on the contrary there’s a sense of excitement and drama to the Vantage drive that lives up to the brand’s image.

Given the brand’s history there, I’d love to take the Vantage for a few laps of Circuit de la Sarthe. Aston Martin has been racing at Le Mans since 1931, winning outright in 1959 with Carroll Shelby and Roy Salvadori and more recently it won the GT1 class in 2007 and ‘08.

The track would be an ideal venue to push the Vantage to its absolute limits, with the long runs down the Mulsanne Straight to test the performance of the V8. While the likes of the Porsche Curves and Indianapolis curve would examine just how well the chassis is sorted.

Obviously it’s a prestigious appearance, with plenty of leather and some Mercedes touches – including the indicator stalks and infotainment controls – but it’s also very busy and cluttered in places which detracts from its luxury feel. Or, in other words, it’s nice but could be nicer. The squared-off steering wheel has a thick-rim that feels solid in your hands and adds to the impressive steering of the car. The huge gearshift paddles are nice too, with a soft metallic finish, but the black-and-white buttons on the wheel do look and feel a touch basic for such an expensive car.

The same is true of the central buttons, of which there are loads, with an overly-simplistic look. And the infotainment system is directly-sourced from Mercedes, but that was already a dated system when it launched in 2018 and the German brand has already begun rolling out a new, more advanced system. The navigation, for example, looks very dated and lacks the sophistication of more modern rivals.

One major plus, though, are the seats. Both are finished in high-quality leather and look great but, more importantly, offer excellent support for high-speed driving.

The Vantage range begins at $299,950 (plus on-road costs) but there’s plenty of options you can add to customise your car and increase that price tag. However, for that price you do get a very impressive sports car, one with suitable performance and handling and an interior that’s liveable for daily use.

In terms of value, the Aston Martin stacks up nicely against its rivals. The Porsche 911 Carrera starts at $236,300 with the more potent Carrera S priced from $296,500. But the most obvious rival is the Mercedes-AMG GT S, which starts at $317,435. It’s unquestionably a great car but there’s something special about an Aston Martin that perhaps gives it an edge. The longer answer is I’m surprised to say that. When I drove the previous generation near the end of its life in 2016, I was thoroughly underwhelmed – it sounded good but felt slow, heavy and dull. This new Vantage isn’t so much a leap forward but an all-new machine that shares little in common aside from the name – it’s fast, engaging and exciting.

Competing against the Porsche 911 is a hard task, and the Vantage isn’t quite on equal terms with it yet but the gap has been closed considerably.