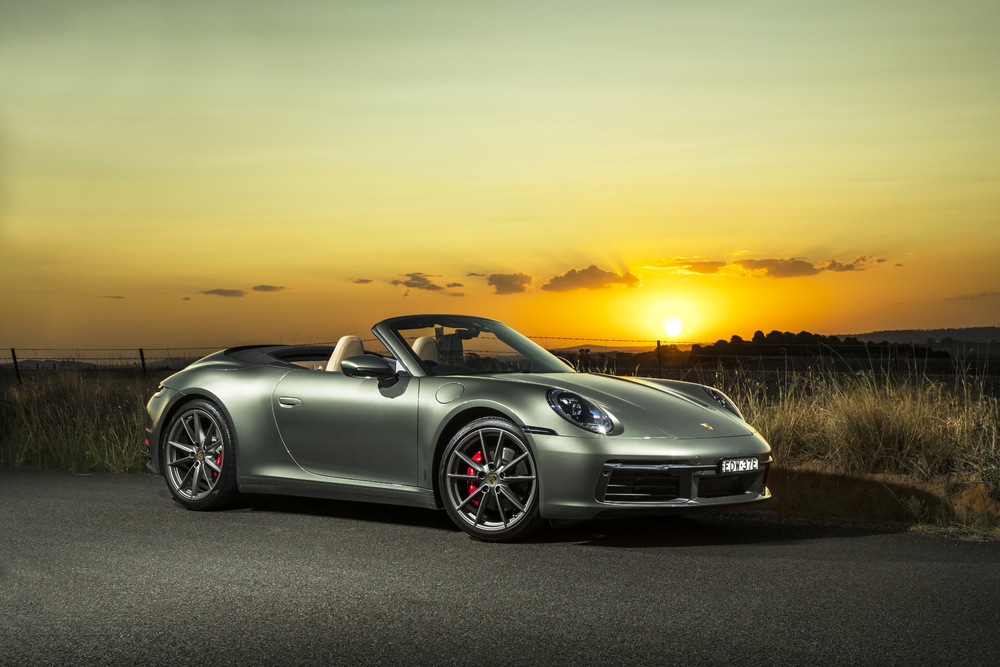 The next phase in Porsche’s highly successful staged roll-out of its latest generation 911. First came the 911 Carrera S to get things started, now roughly 12 months later the cheaper, less powerful 911 Carrera has arrived, along with this – the 911 Carrera S Cabriolet.

Next will come the 911 Turbo and Turbos S (which were revealed in March this year) and then the Targa variants, followed by the sporty GTS and track-focused GT3 in 2021.

Make sense? It may sound like a confusing game of alphabet soup to some, but for the German brand it’s a highly efficient stream of better or different models that help keep the interest in its iconic sports car.

So, what we have here is the convertible version of its Carrera S, which will ultimately sit between the Carrera and GTS in the completed line-up. It’s also one of the few convertible sports cars I like, because generally I find cutting the roof off a finely-honed coupe a fast-track to soggy handling and a compromised package. But for a brand has learned as Porsche, it’s able to avoid those traps.

Obviously the Cabriolet doesn’t have any racetrack experience, that’s the job for the coupes – specifically the GT3 (which forms the basis for the brand’s Carrera Cup and GT3-class racers). But thanks to the brand’s history of tuning its cars for the track, the Cabriolet would feel at home on a circuit almost as much as its hard-top siblings. 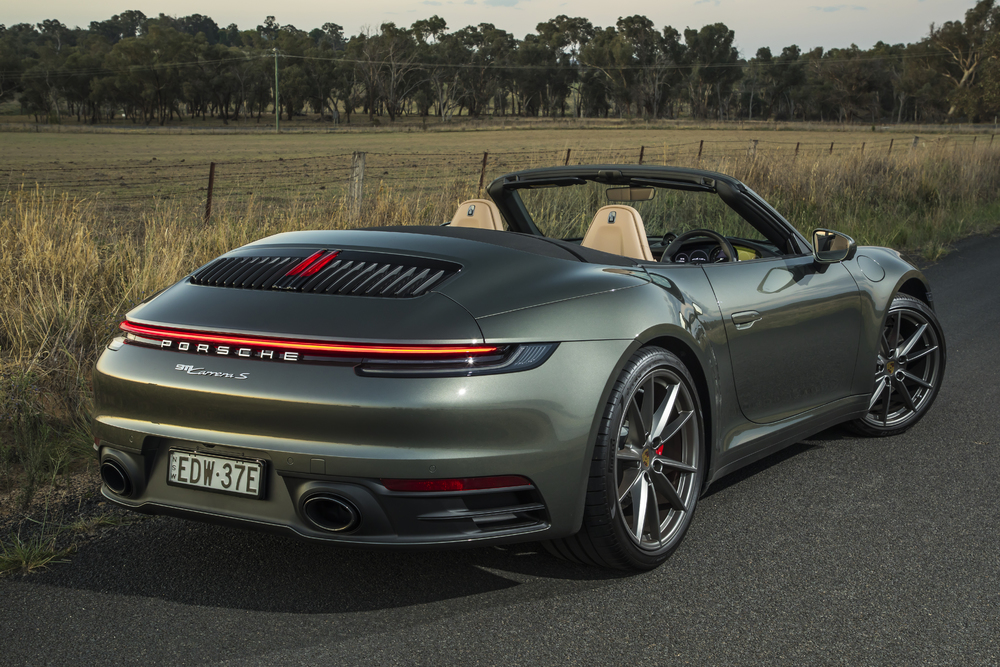 It gets the same 3.0-litre twin-turbo flat-six as the rest of the Carrera range and because it’s the Carrera S that means it gets the warmer tune. So it makes 331kW of power and 530Nm of torque, compared to 283kW and 450Nm that the standard Carrera pumps out.

It’s paired to an eight-speed dual-clutch transmission (or Porsche Doppelkupplung as the brand likes to call it) and sends its performance to the rear-wheels; or there’s a 911 Carrera 4S Cabriolet available too if you prefer all-wheel drive, because the brand has a choice for everyone or so it seems.

Our test car also came fitted with the option SportsChrono package (in fact, I’ve never driven a local Porsche without this extra fitted) which adds a dial on the steering wheel that switches between Normal, Sport and Sports Plus settings – which alter engine and chassis responsiveness.

As we discovered when we drove the Carrera 4S last year, this latest evolution of the still relatively new turbocharged six-cylinder engine is a gem. In the normal setting it can cruise as comfortably as your family SUV, the wide spread of ratios in the transmission allows it to trot along with a minimum of fuss. But, when you need more performance, or dial up Sport or Sport Plus, the engine and transmission work together to unleash awesome performance for a six-pot engine. While it misses the linear purity of the old naturally-aspirated 3.8-litre flat-six, the addition of the turbos does allow for more torque low in the rev range, which all 530Nm kicking in at just 2300rpm and staying steady until 5000rpm – which is when the power takes over to keep you surging forward.

What that means in the real world is the engine has immense flexibility, so for example, there’s enough torque to leave it in a taller gear exiting a corner but you can leave it and let it run all the way to its near 8000rpm redline. And, of course, with the Cabriolet you can have the top down to really enjoy the full sensation of the screaming six-cylinder soundtrack. This is typically where convertibles start to fall down compared to their coupe siblings, the loss of the roof has a negative effect on torsional rigidity, which car companies try to compensate for by adding more bracing (and therefore weight), which leads to less precise handling. Naturally there are some noticeable differences between the 911 Cab and coupe, but they are far less pronounced than most rivals.

Yes, the Cabriolet weighs more, tipping the scales 70kg heavier than the hardt-top; 1585kg compared to 1515kg. And, yes, you can feel some scuttle shake when you really push the Cabriolet across twisty, rougher roads. But on a smoother, but no less twisty, piece of tarmac this open-top version feels just as engaging and enjoyable to drive as the coupe.

It has the same razor sharp steering, the same firm and progressive brakes and the same taut but controlled suspension set-up that makes the 911 the benchmark sports car. It communicates with you in a way few sports coupes, and even fewer convertibles, do, which instills you with confidence as a drive and allows you to push harder and harder the more you get to know it. This is a car that will reward you as long as you own it.

The 911 Carrera S Cabriolet is built for an autumn drive through the hills – like New South Wales Blue Mountains, Victoria’s Dandenong Ranges or the Gold Coast Hinterland. On a mild day with the sun not beating down, with the top down and the sports exhaust popping and crackling there is nowhere else I’d rather be. 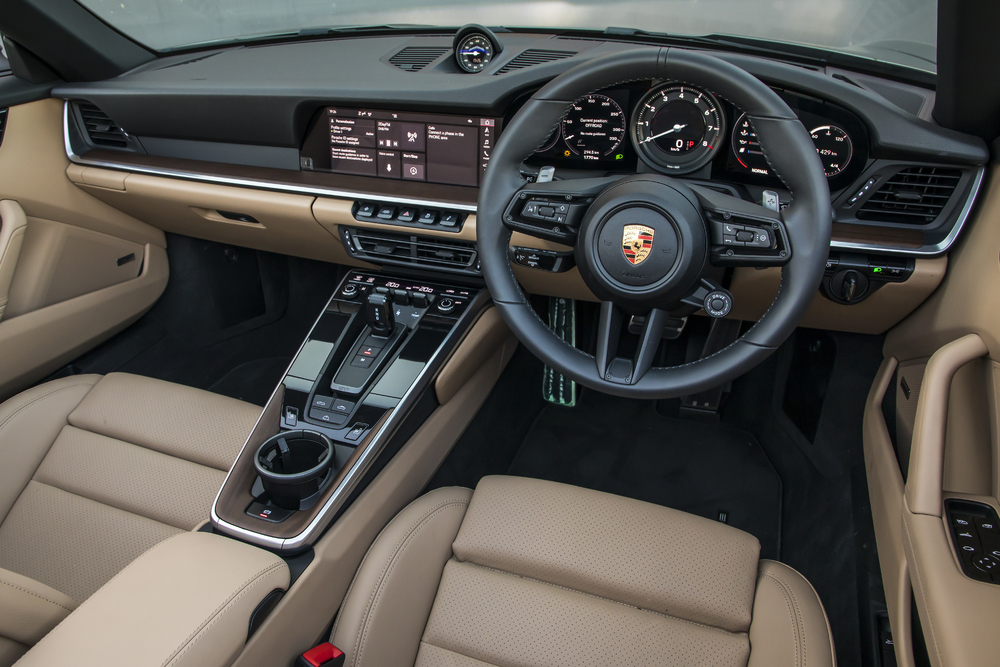 It’s the same cabin design as the coupe, which means and excellent blend of traditional touches (eg. the round tacho) and modern (eg. the toggle-like gear selector). The horizontal lines of the dashboard fascia speak to the past, but also perfectly enclose the latest and greatest infotainment system from the brand (that’s unique to Porsche and not borrowed from another Volkswagen Group family member).

It’s an incredibly comfortable car too, with leather-lined and supportive sports seats, as well as high-quality materials and finishes throughout.

As for the convertible roof, it can open or close in just 12 seconds and at speeds up to 50km/h, and feels solid when in place. With it folded away there’s only limited buffeting, especially with the wind deflector raised into position; although that only fits if you’ve got no-one in the back seat; not that any adult could comfortably squeeze into the parcel shelf disguised with seat belts.

Of course there has to be a catch with a car this good and it comes when you look at the price. It starts at $296,900 (plus on-road costs) which is a lot of money for any car, even one as good as this. And naturally, being a luxury car, there’s a long list of options that drive up the price – such as the Sports Chrono on our test car that’s a $4890 extra, despite it being so popular it’s almost a standard item on Aussie Porsches. All totaled our test car ended up north of $320k which isn’t chump change for anyone. As much as I enjoyed my time in the Cabriolet, if I was spending around $300k on a 911 I’m opting for the coupe every day of the week – and twice on track days!

It’s as good as a convertible gets, but I personally wouldn’t get enough use of the soft-top to justify the trade-off in performance and comfort the hard-top provides.