Perhaps the best bang-for-your-buck Porsche you can buy. And it’s also one of the best sports cars on the market today – period.

The 911 GT3 has become an icon for the German brand, representing its ultimate driver’s car – no turbochargers, just pure naturally-aspirated power and a chassis tuned for track work. So it was only natural that Porsche would experiment with the concept for the 911’s smaller sibling, the Cayman; thus the Cayman GT4 was born on the second generation (981) model.

That model effectively packaged the drivetrain from the 911 Carrera S, with its 3.8-litre flat-six and six-speed manual gearbox, as well as adding an aggressive new body kit to mimic the 911 GT3 formula.

For the current generation (982) has taken it to the next level, with a more potent powertrain and further refinement to the chassis and its handling.

GT4 isn’t just a marketing name, Porsche has developed a 718 Cayman for the GT4 racing category. Known as the 718 Cayman GT4 Clubsport it’s a turn-key racing car you can order through Porsche Australia. The Porsche 718 Cayman GT4 and the GT4 Clubsport

There’s plenty of similarity between the road and track cars – both have the same engine – but there’s also some key differences, including the race cars six-speed dual-clutch transmission and even more aggressive aerodynamic package. Even so, you can clearly see the connection between the two cars and the motorsport DNA that filters into every Porsche sports car.

While the original Cayman GT4 used the 911 Carrera S running gear for a performance boost, this time around that wasn’t an option because the new 3.0-litre turbocharged flat-six simply doesn’t fit in the 718 Cayman. It’s also a turbocharged engine and that doesn’t fit the ethos of the GT3/GT4 models.

That’s the bad news. The good news is it forced Porsche to use the only naturally-aspirated flat-six in its line-up, the awesome 4.0-litre version used by the 911 GT3. In order to keep some separation between the ‘big brother’ 911 (which makes 368kW/460Nm) the Cayman GT4 gets a detuned version. 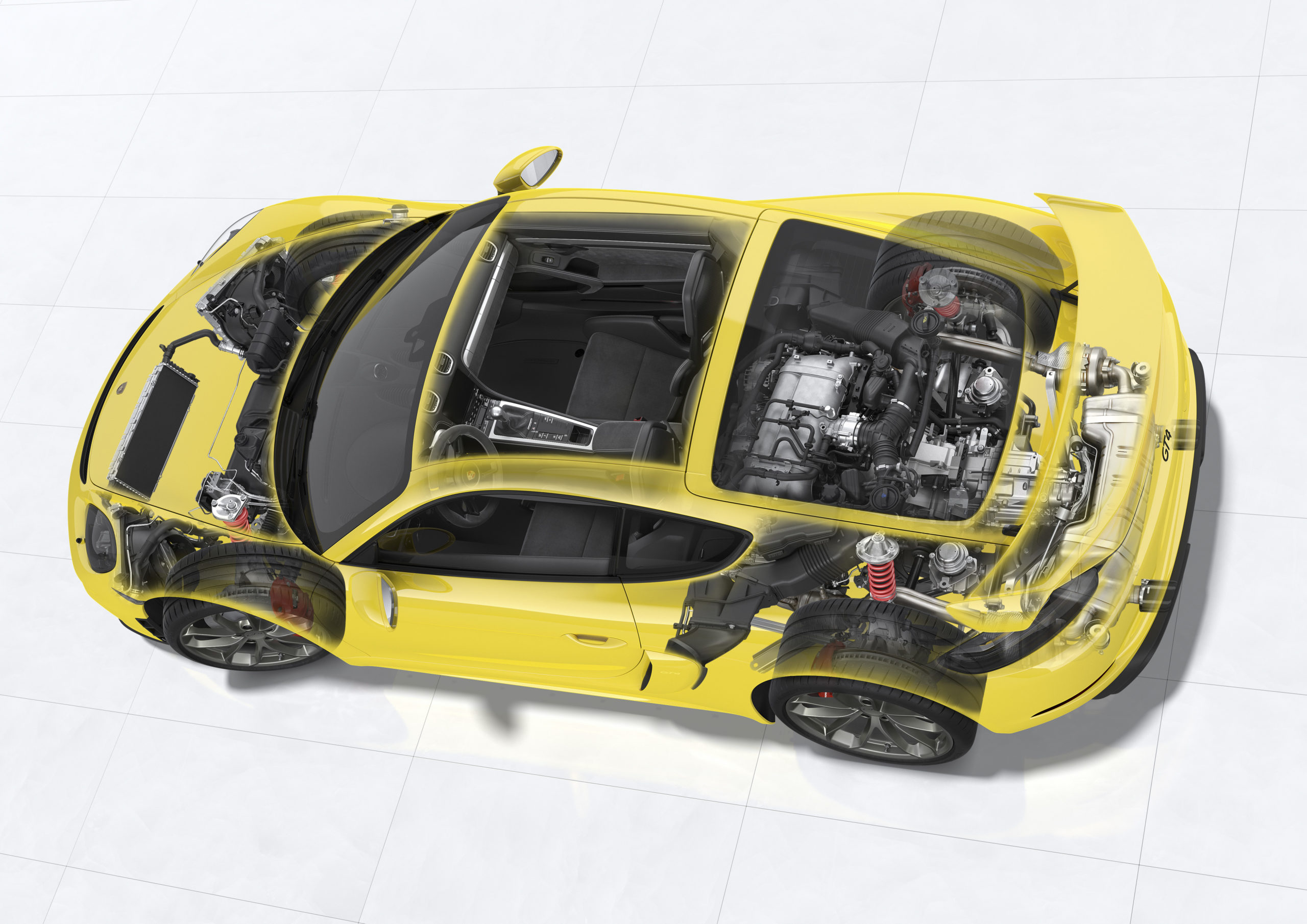 But it’s still good for 309kW of power and 420Nm of torque which is more than enough grunt to endow the lightweight GT4 with serious punch. Porsche’s 0-100km/h claim is 4.4secs which isn’t record pace but is certainly enough to feel seriously quick off the mark.

The way the engine delivers its performance is great too, with maximum power not hitting until 7600rpm, so unlike turbocharged engines that can feel better in the mid-range the GT4’s 4.0-litre likes to scream all the way to the redline.

As great as the engine is, it’s let down slightly by the transmission, because once again Porsche had limited options. The six-speed manual gearbox should be ideal for the free-revving flat-six, but instead of having tightly packed ratios to accentuate top end performance it features a wide set of ratios that feel a bit too tall. At least in Australia anyway where we don’t have any autobahns for it to stretch its legs.

How tall? Well, first gear will take you to 84km/h and second beyond 130km/h. It’s not a bad gearbox, per se, it just feels like it would better suit the character of the car if it made the driver feel more active and involved. We tested the car at the Pheasant Wood circuit south of Sydney, and on such a tight and technical layout with a relatively short straight we spent the entire lap in either second or third.

Like you’d expect a Porsche tuned for the track to handle – brilliantly.

What makes the 718 GT4 so special isn’t one thing in particular, it’s the way the whole package comes together to form a beautifully fluid and predictable package that never feels intimidating but equally doesn’t feel easy-to-master. 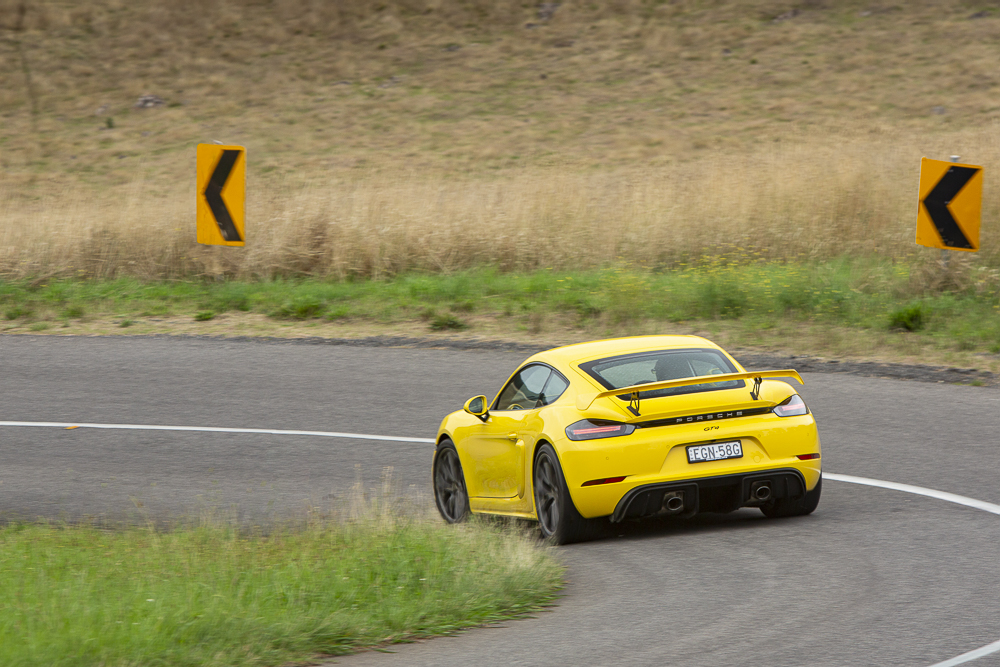 The Porsche 718 Cayman GT4 is great on road and track

The Michelin Pilot Sport Cup 2 tyres provide exceptional grip and work in concert with finely-honed suspension that makes the chassis and steering feel responsive and direct. Obviously in such a track-biased model the suspension is firm and the 20-inch alloys with low-profile rubber do combine to make it an uncomfortable ride at times on the road. Overall though, it’s no worse than any of its peers and certainly not unbearable to live with.

As mentioned earlier, our test drive included some racetrack laps in order to get a feel for the GT4 in its natural habitat. Unsurprisingly it excels on a circuit with its predictable handling but huge operating window. It’s an ideal track car for those looking to step up from cheaper, less-quick machines, because it allows you to find your own limit with confidence before revealing the car has more left in it – so you need to raise your own game.

The short answer is anywhere.

Despite the firm ride the GT4 still performs brilliantly on the road and can be driven spiritedly and enjoyed while still obeying all the road rules. However, if you really want to experience it and its massive potential you need to hit a track.

Any track would do, the handling would shine around a track like Winton or Wakefield Park but the tall gearing would feel better suited to a faster circuit like Phillip Island where you can really stretch its legs and let the engine scream to its 8000rpm redline.

More business-like than your typical Porsche. There’s less leather and more Alcantara in keeping with the racing theme. It still feels premium, but more ‘Pit Lane’ than ‘Pitt Street’ if you catch my meaning. 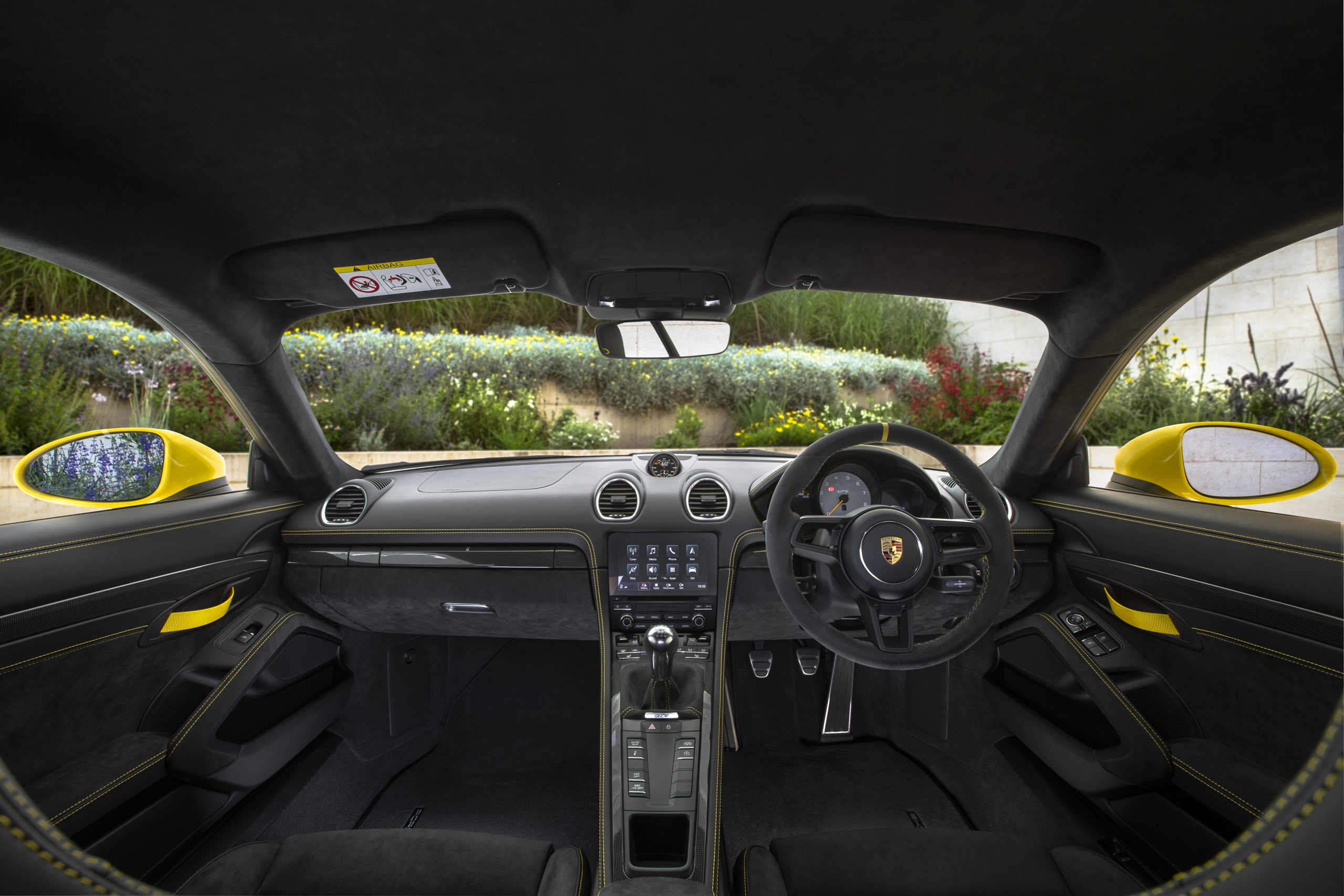 The Porsche 718 Cayman GT4 interior is sporty but still premium

All the key controls are at your fingertips and you can wrap your hand around the thick-rimmed, suede-wrapped wheel. It’s worth noting here that the wheel is devoid of buttons – no stereo controls or cruise control – nothing to distract you from driving.

The seats are sporting buckets that offer excellent support, even on track, and are finished in Alcantara and leather for a premium touch; plus they’re comfy as well.

Our test car was finished in bright yellow bodywork and the colour was used for the interior contrasting stitching and the ‘lightweight’ door pulls (that replace handles in another racing nod).

The 718 Cayman GT4 is priced at $207,000 (plus on-road costs) which is obviously not pocket change, but it’s a good price for such a capable car from an esteemed brand. So I’d suggest it’s hard for someone to argue it’s not good value for what it is. While the appeal of the 911 as the long-running icon model of the Porsche range is hard to deny, the fact the GT4 is nearly $30k cheaper than the entry-level version of its big brother makes it even more tempting.

Most definitely. In fact, while the next-gen 911 GT3 will be faster and more capable, it’s genuinely hard to imagine it being so much better it will overcome a $100,000 price difference, at least in this reviewer’s eyes.

The 718 Cayman may never match the 911 in many people’s opinion but if Porsche keeps building cars like the GT4 it will earn a devout following of its own. 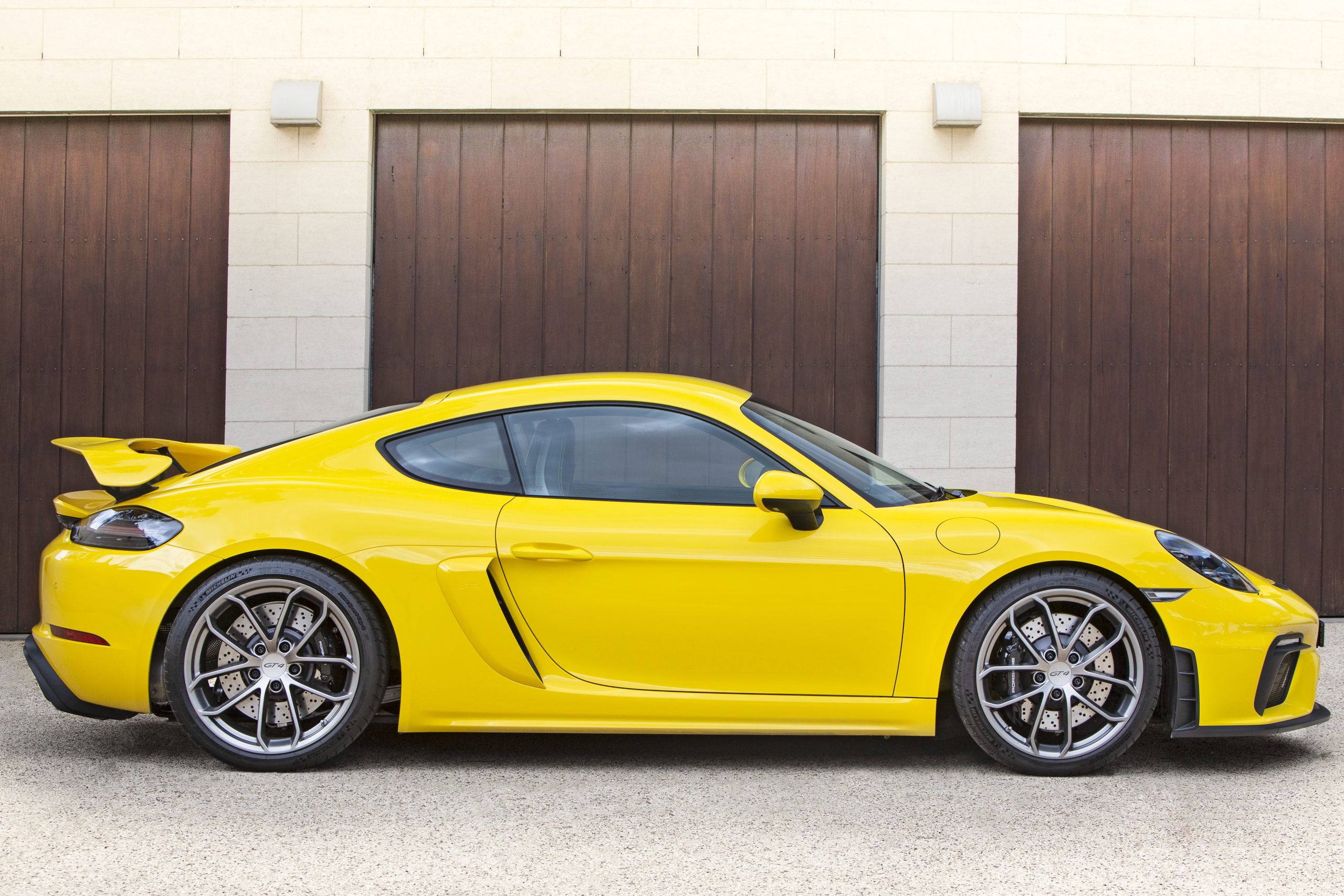