The clearest demonstration yet of how far Lexus has come. Toyota’s luxury brand was once the conservartive – and frankly, daggy – competition to Germany’s trio of luxury powerhouses; Audi, BMW and Mercedes-Benz.

Sure, the company has built the heroic LFA supercar and has the RC F and GS F V8 muscle cars in its range, but this latest generation LS shows just how far the brand has progressed in terms of style, performance and technology.

This is the brand’s flagship sedan rival to the likes of the Audi A8, BMW 7-Series and Mercedes-Benz S-Class; which means it needs to be very, very good to take on those iconic models.

Obviously prestige-badge limousines are not your typical racing fare, but Lexus has been ramping up its on-track involvement over the last few years under the Gazoo Racing umbrella. 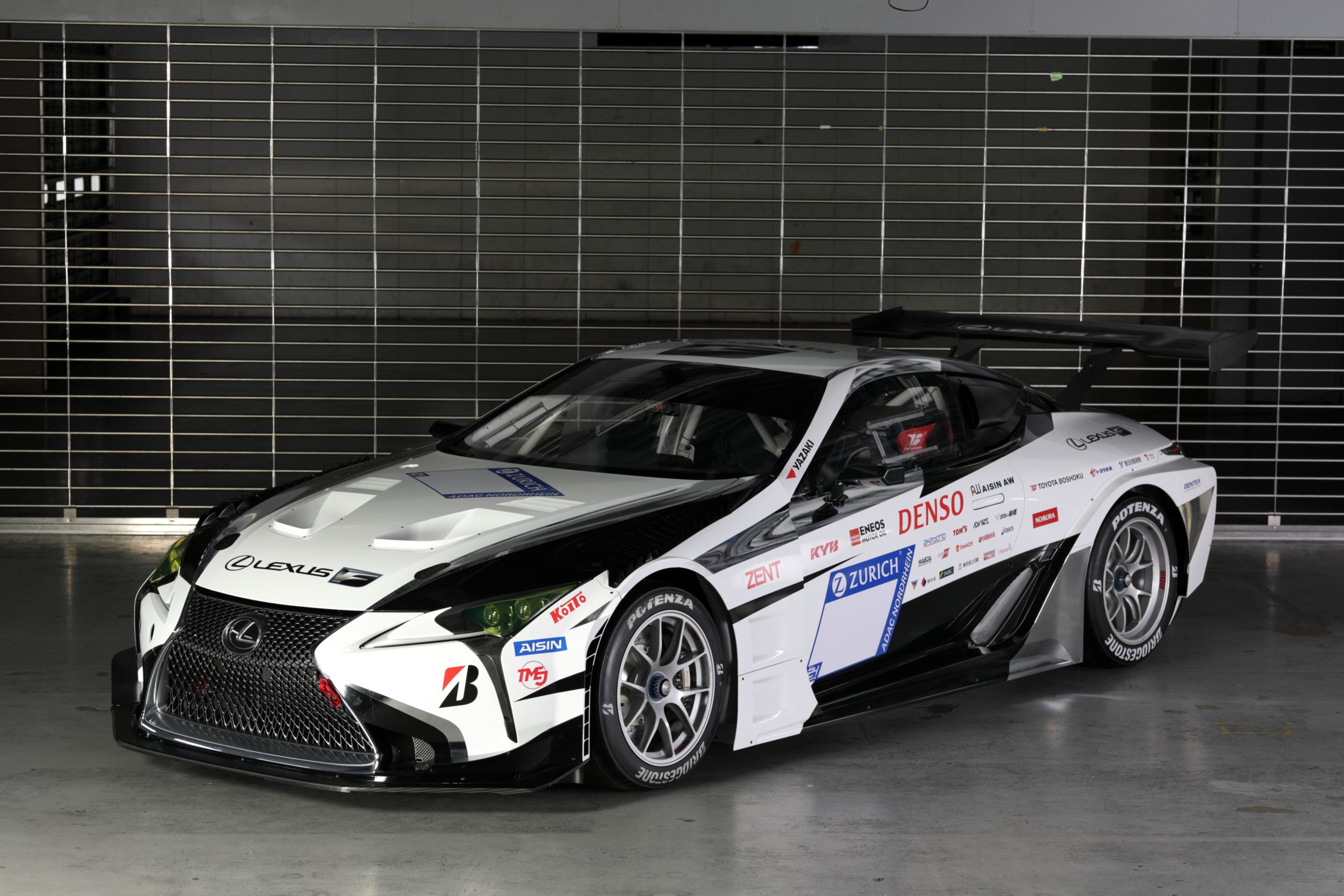 The company regularly enters prototype production models in the Nurburgring 24-hour to give future road-going components an extreme workout. This year’s race is meant to see the debut of the company’s new twin-turbo V8 – which is an evolution of the engine under the bonnet of the LS500.

Lexus also claims that the laser-cladding technology used on the new engine was pioneered in F1 and developed in its WRC and Le Mans programs.

It’s as much as a case as what’s not under the bonnet as what is. Lexus has finally retired its endearing but ageing 5.0-litre in favour of something more modern. The LS500 is powered by an all-new 3.5-litre twin-turbo V6 petrol engine, paired with an equally cutting-edge 10-speed automatic transmission.

In this initial guise it’s been tuned to produce 310kW of power and 600Nm of torque, which is healthy without being ostentatious. It’s enough to endow the LS500 with spirited performance, the long limo can leap from standstill to 100km/h in just 5.0 seconds.

Unfortunately it doesn’t make the same glorious, growling soundtrack as the old V8, but it does get the job done in a more efficient manner.

The 10-speed gearbox does a surprisingly good job of managing so many ratios without ever feeling confused or too busy; at least when you leave it to do its own thing. When you select the Sport or Sport+ modes (via the Frankenstien-style bolts on the side of the instrument binnacle) it’s a better way to handle the gear changes yourself, via the paddle-shifters, because you’re better able to keep the engine in its performance sweet spot.

There’s no escaping the LS500 is a big car, it measures 5.23m in length. So unless Lexus performs actual magic, it’s never going to perform with the nimbleness or agility of a smaller sports sedan but there is plenty of clever engineering in the new GA-L platform that underpins the car. 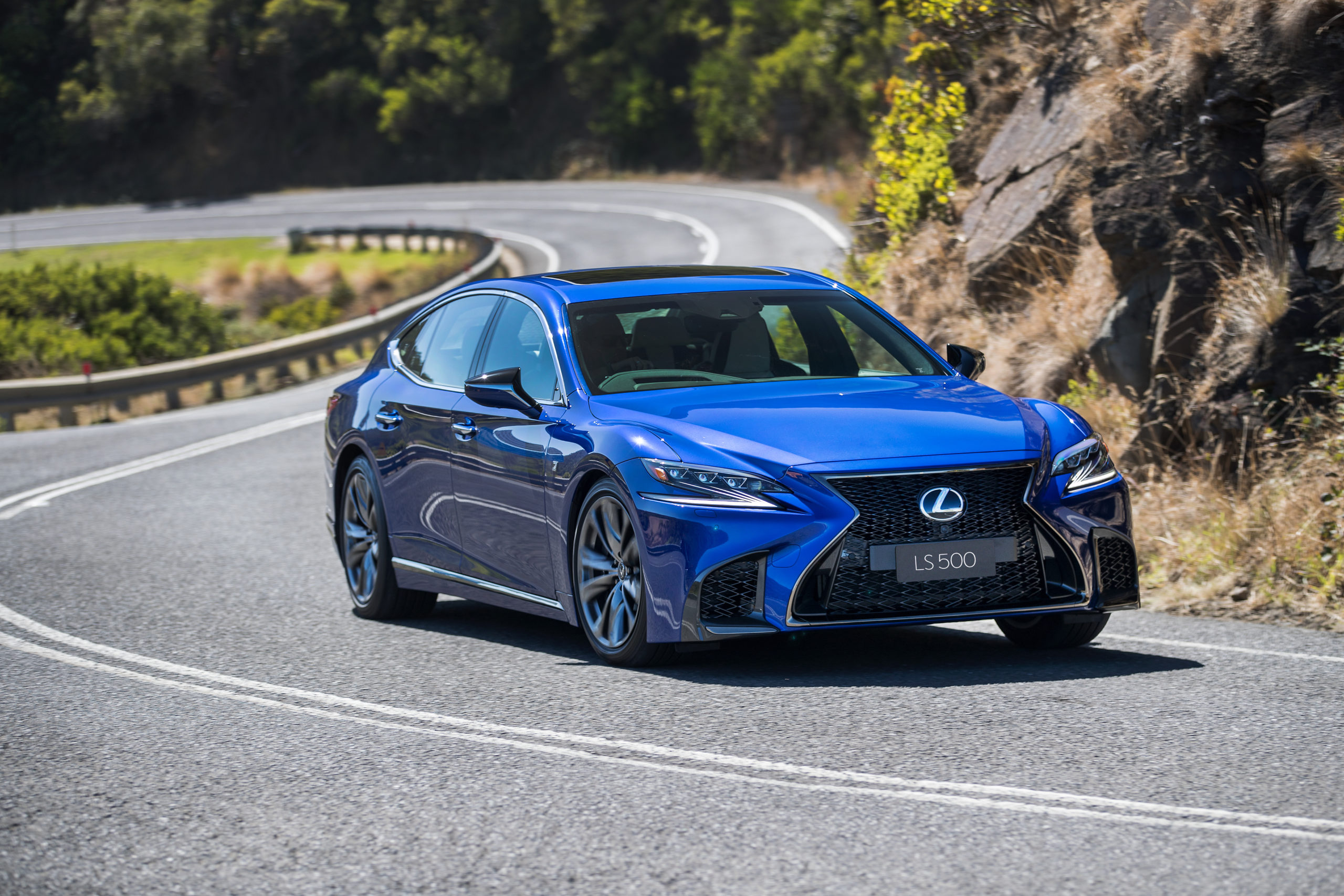 That’s a lot of technical talk but what it all means is the LS500 F Sports rides and handles with more agility than you’d previously expect from a car like this. Around town it cruises comfortably, as you’d expect from a luxury limo, but dial up Sport or Sport+ and the car’s dynamic systems engage.

The suspension is tauter and more controlled, naturally there’s still noticeable body roll when you corner with conviction, but it still hangs on and offers progressive handling. Naturally with a long wheelbase (3125mm) it feels stable when cornering but struggles to change direction, however that’s off-set slightly by the four-wheel steering that helps make it turn-in quicker.

I guess the biggest point with the new LS500 is that you do actually want to drive it yourself. While it’s still got a spacious and pampering back seat, the luxury market has shifted to SUVs for people who like to be driven. 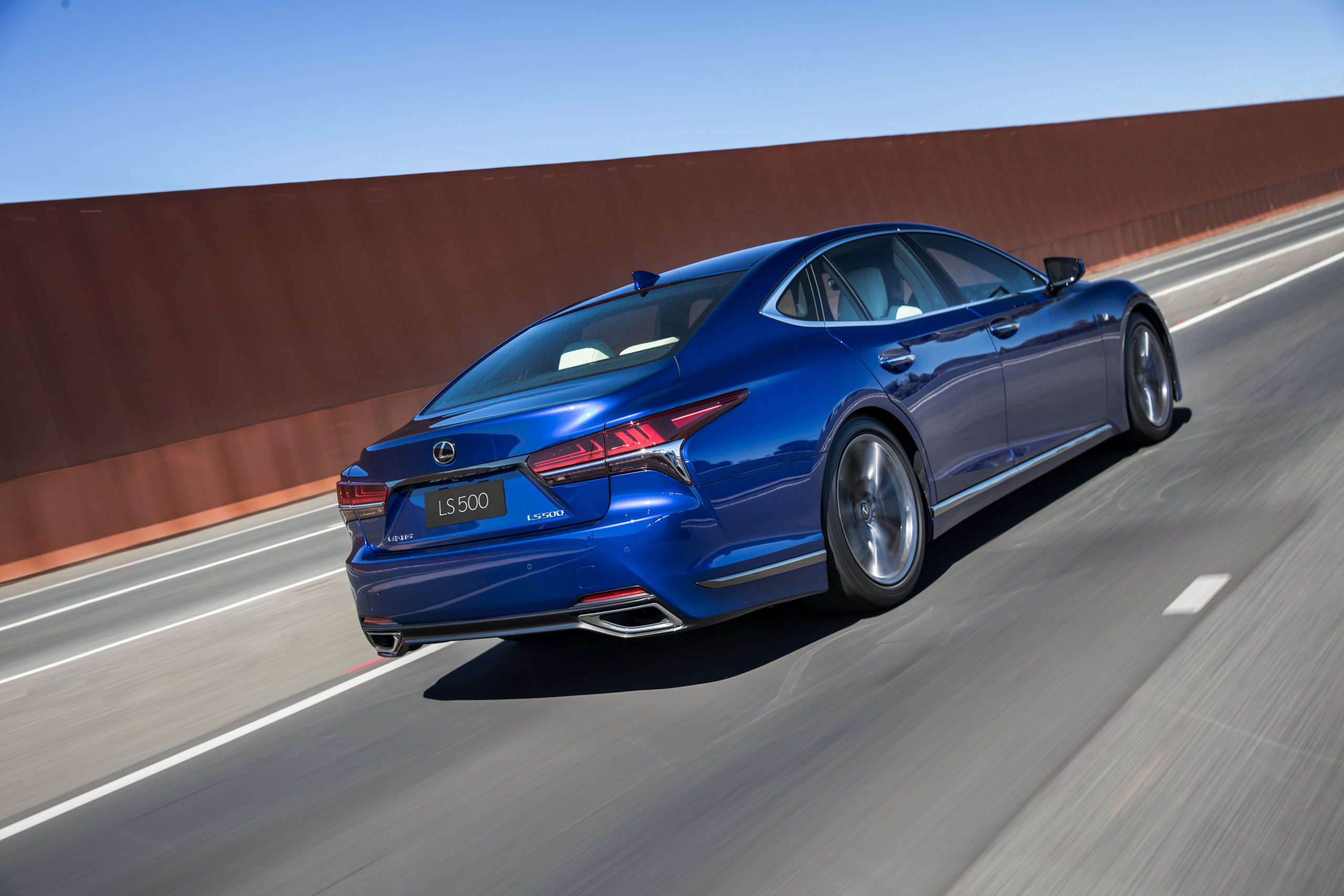 So the big sedan has to appeal to the driver as much as the passenger these days, and in that sense the LS500 does a great job. It’s obviously more at home on a more open, flowing road because of its size – rather than a tight and twisty mountain pass – but it does feel composed and engaging when you do throw it down the road with some gusto.

Two elements stand out in the cabin – details and space. 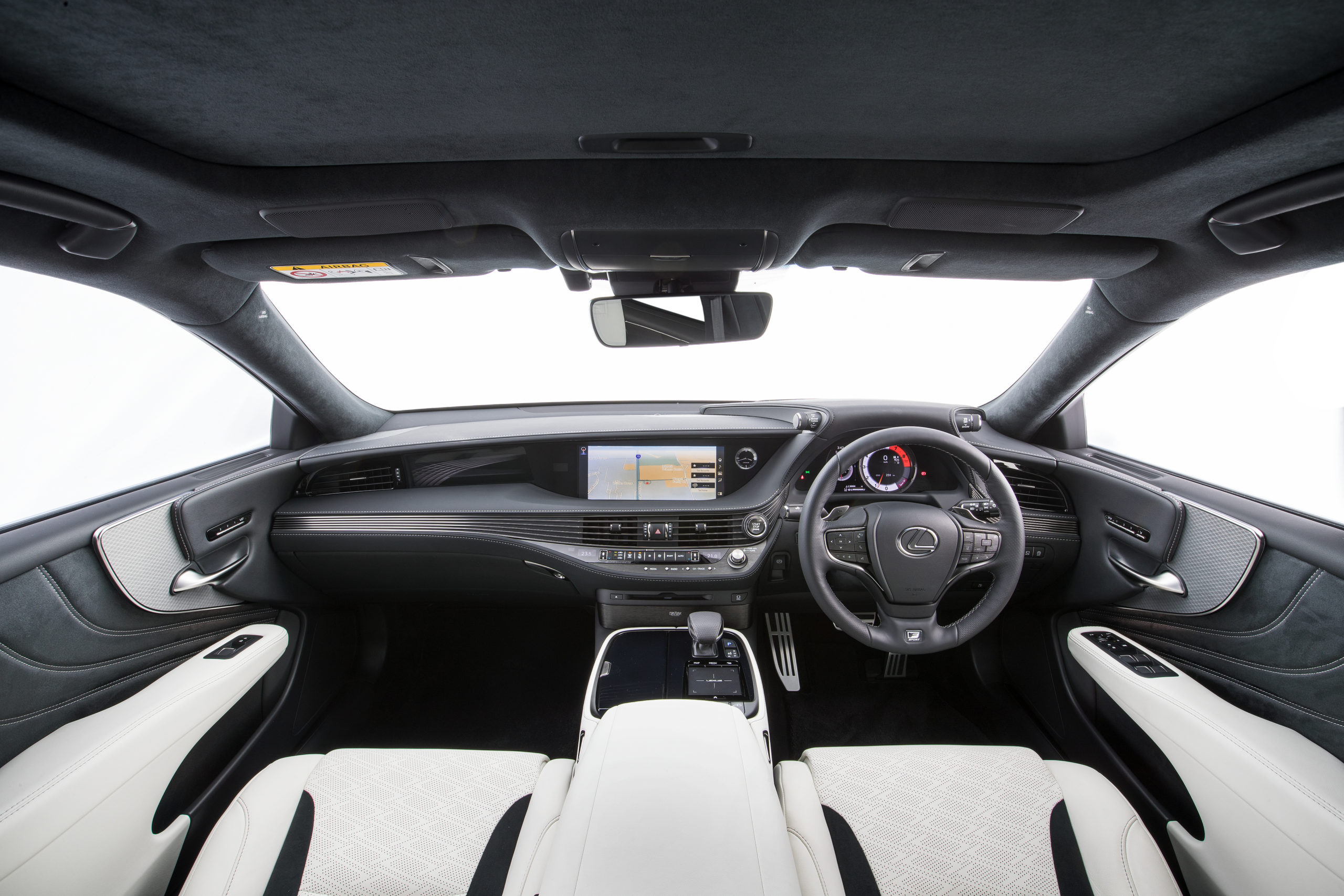 Both the overall design and the attention-to-detail of the LS speak to Lexus’ commitment to make a statement with its design, after decades of playing it safe. The brand’s ‘spindle’ grille has now become a trademark and has influenced the cabin design with its intricate pattern.

The dashboard sweeps around the front of the interior, creating both a feeling of space, while still allowing all the key controls to fall easily to hand.

Then there’s the smaller details, such as the screen in front of the passenger that extends the graphic design. Or the way the leather on the doors sweeps upwards to integrate with the rest of the design.

It may be more of a driver’s car now, but that doesn’t mean Lexus has forgotten the LS is a limousine too. Room in the back is immense, with a longer wheelbase creating more legroom for rear occupants. Those getting driven get pampered with plenty of shoulder room as well as heated seats and sunblinds on the rear window. It’s an impressive offering, and a step forward for Lexus as a brand and the LS as a model, but the harsh reality is the limousine segment is a small one and is driven largely by the badge. Of course, it doesn’t hurt that the Audi, BMW and Mercedes are all very good cars in their own right, but they also wear a more familiar badge on the grille that makes them more appealing to the target market.

As for me personally, I enjoyed my time in the LS500 F Sport but ultimately I prefer my sports sedans a bit smaller and more nimble.