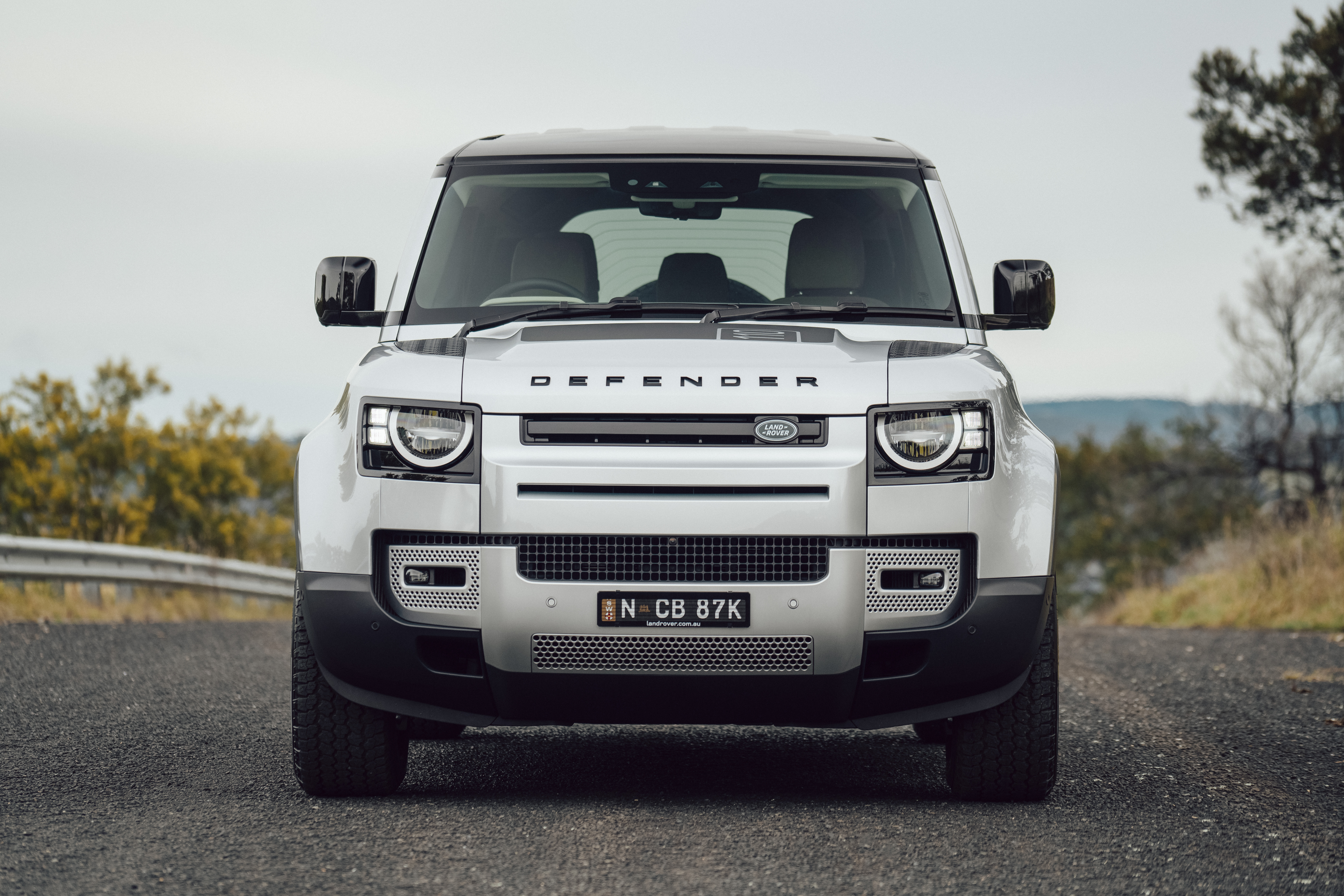 The rebirth of an icon.

The Defender name has only been around since the 1980s, but the origins of the off-roader can be traced all the way back to 1947 when Rover decided there was a market for a British-built answer to the Willys Jeep.

It became an almost instant hit and over a 68 year lifespan it evolved from an army vehicle to a farmer’s best friend and then eventually a weekend adventure mobile for inner-city types. In short, it became a genuinely iconic vehicle; a label few models can truly lay claim to.

But that created a problem – how do you replace an icon? Particularly when you need to make it meet modern safety and emissions standards, as well as cater to a changing audience.

The answer came last year when Land Rover unveiled the vehicle you see here, it’s a Defender, not not as we know it. The name has stayed the same, but no competent is carried over between old and new.

However, Land Rover has tried to retain the spirit of the old model – keeping the same silhouette and much of the same capability.

Or as Land Rover’s Chief Design Officer, Gerry McGovern put it: “The new Defender is respectful of its past but is not harnessed by it. This is a new Defender for a New Age. Its unique personality is accentuated by its distinctive silhouette and optimum proportions, which make it both highly desirable and seriously capable – a visually compelling 4×4 that wears its design and engineering integrity with uncompromised commitment.”

So, the question becomes – does this live up to the Defender’s old reputation or carve a new path…

Would you believe it does. British firm Bowler built the Tomcat and Wildcat, that included elements of the Defender, to tackle Rally Raid events including the Dakar Rally. 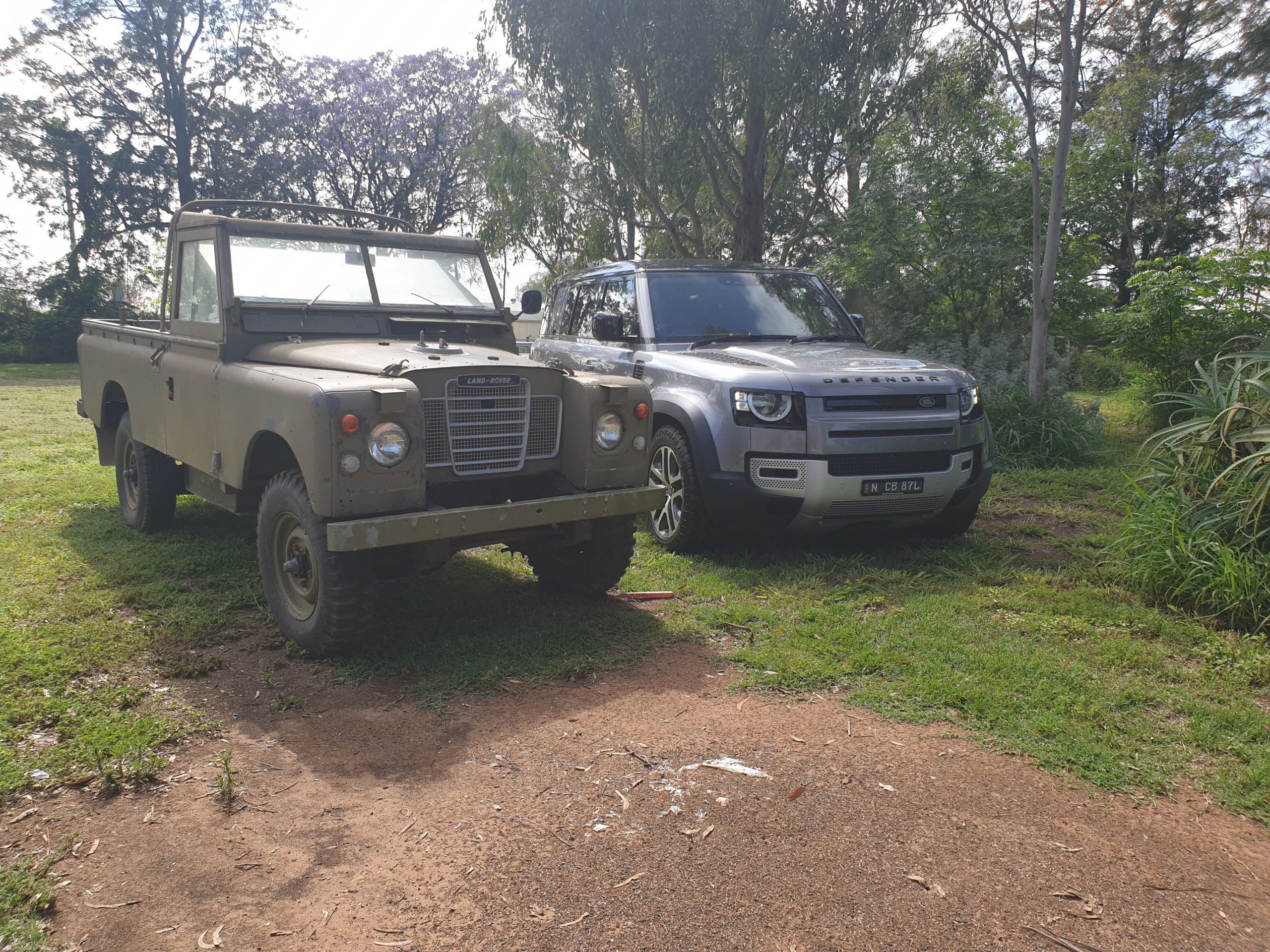 But what it’s really famous for is its ‘go-anywhere’ reputation forged in combat. This was Great Britain’s (and other countries, including Australia) answer to the Willys Jeep post-World War Two, so it has served in war zones around the world.

It was through seeing it take on those extreme situations that help the Defender (or simply the Land Rover as it was originally known) become a favourite amongst farmers and adventures who prized toughness over anything else.

This re-born Defender has a huge legacy to live up to.

This is where the new Defender really diverges from the old model. Land Rover is offering a range of newer, cleaner and more powerful engines than the old Defender, including a plug-in hybrid eventually. Our test model was the P400, which is powered by a 3.0-litre turbocharged inline six-cylinder petrol engine. It makes 294kW of power and 550Nm of torque and is coupled to an eight-speed automatic transmission, and naturally a four-wheel drive system.

It’s got decent punch for a rugged SUV, feeling strong off the mark and through the mid-range. It’s not sporty by any means, but Land Rover claims a 6.1 second 0-100km/h time which is impressive for this type of vehicle.

The eight-speed auto helps extract the best from the engine, while still keeping fuel economy to a respectable 9.9-litres per 100km.

This is another area where the new Defender is unrecognizable compared to its predecessor – in a good way. 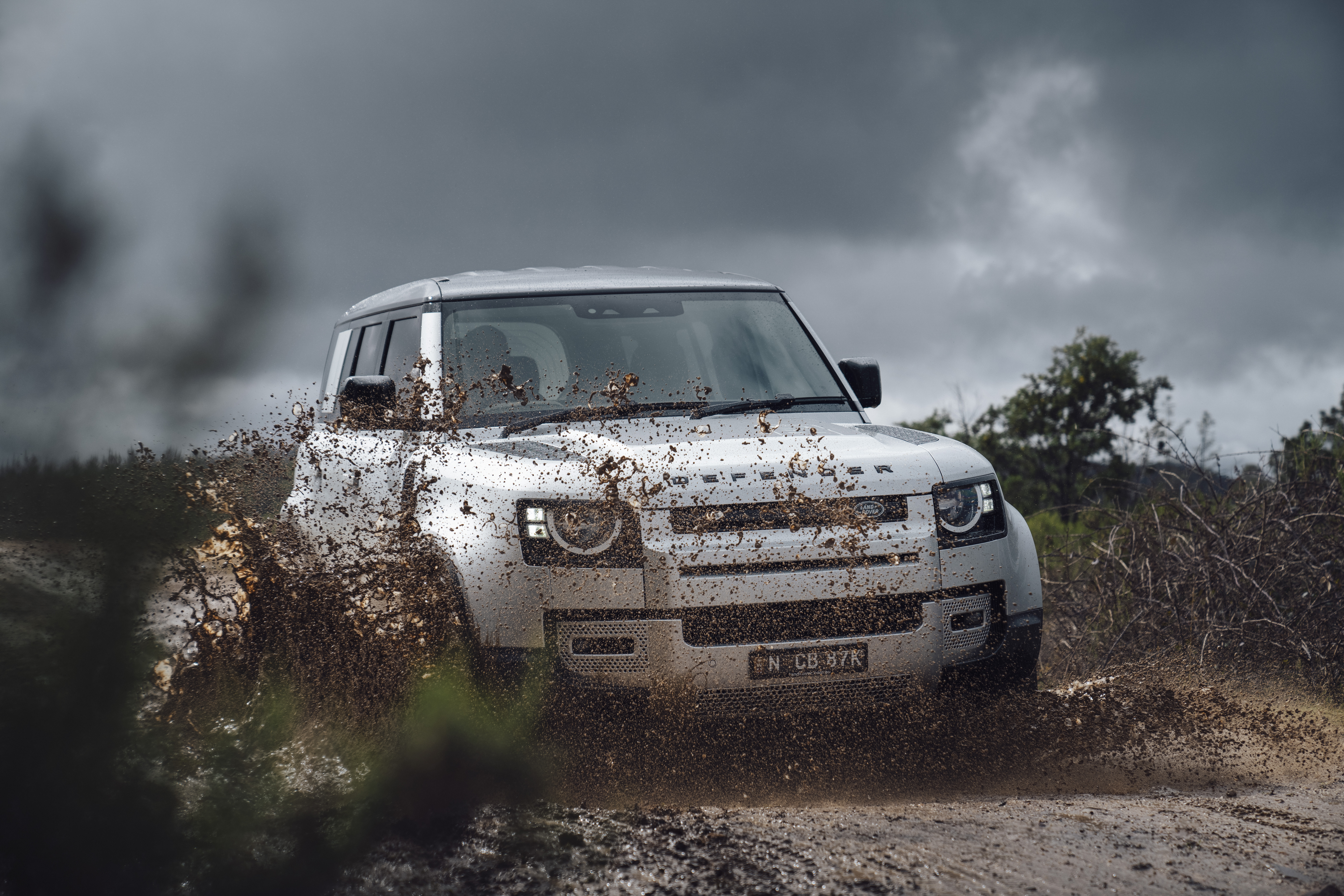 Our test drive was focused on-road this time (stay tuned because we have plans for a comprehensive off-road review in the coming months) because that’s where the old Defender struggled the most. Even at nearly 70 years old it was still a capable bush-basher or mud-crawler, but put it on sealed roads or try to drive it around town and the old Defender was, quite frankly, a pain. It didn’t turn, the brakes were average and the ride was choppy.

This 21st Century Defender literally feels every one of its 70 years more advanced. The P400 S we tested came standard with electronic air suspension, adaptive dynamics and twin-speed transfer box. So it’s still capable, like the original, but does it using modern technology.

What it means on the road is a fairly softly sprung ride, by modern SUV standards, so you notice more body-roll when cornering. But the steering is direct and nicely weighted (not something you could say about the old Defender) so it’s easy to drive and feels stable and planted for a high-riding off-roader.

The brakes need to work hard to pull up the Defender though, because it tips the scales at more than 2300kg so it’s a big, heavy machine.

For our extended test drive we used the new Defender as transport for a weekend away with mates in New South Wales Hunter Valley wine region. That meant negotiating our way through Sydney, a stretch of freeway running and then touring around the back roads of the Valley. This is the kind of thing the modern Defender will be tasked with, just as much as rugged off-road camping expeditions, so it was a solid test.

It did an impressive job across the various scenarios, proving capable of fitting four adult males in comfort, as well as a boot full of wine.

Once again, this is an area where Land Rover has made massive strides forward in terms of modernising the Defender, but importantly the designers have tried to retain some elements that are a nod to the past. 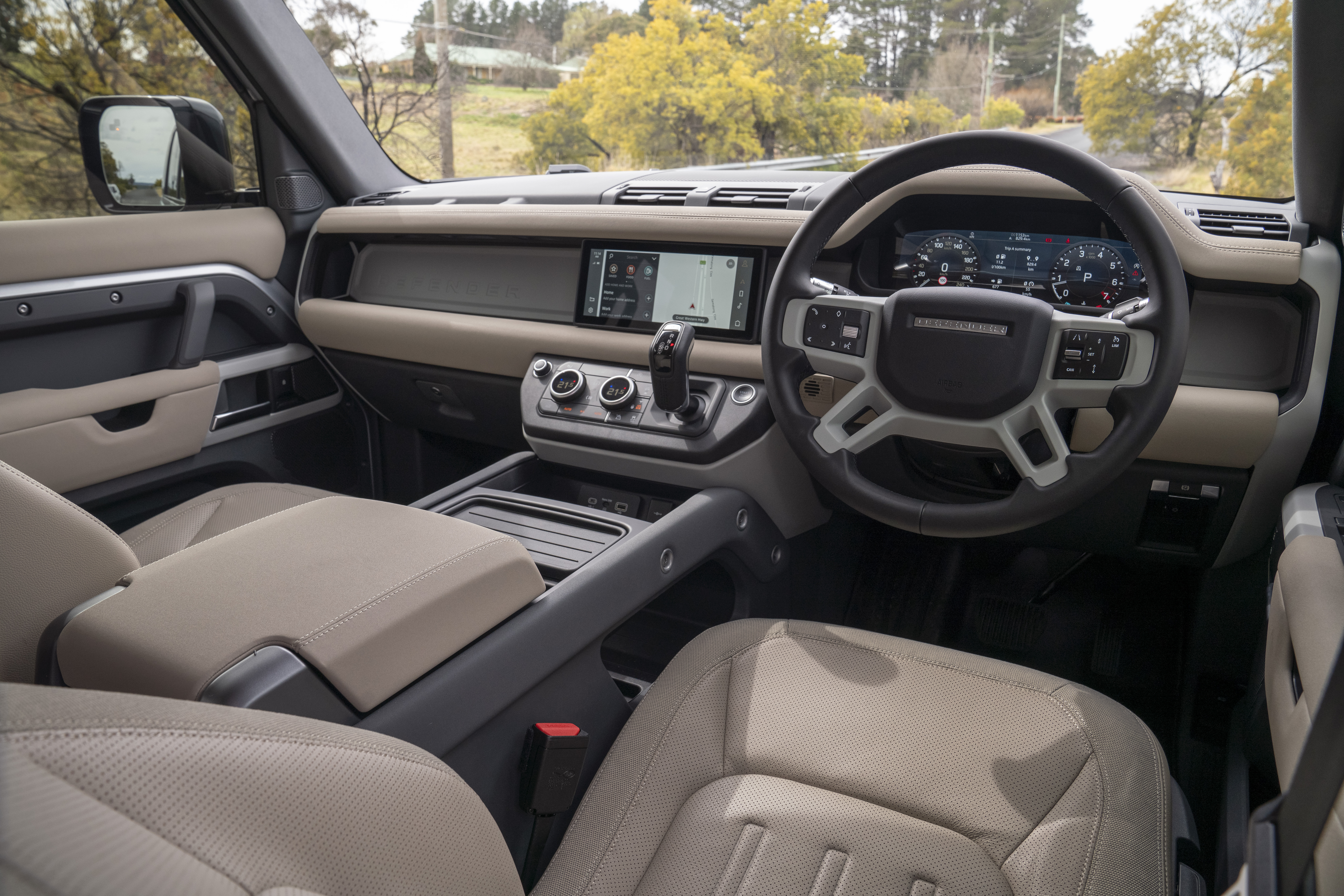 It still has the four-spoke steering wheel that became a staple of the original, but now it has sleek buttons for the sound system and adaptive cruise control. The dashboard is more modern and includes a smart-looking infotainment screen and minimal switchgear, but it also has lots of clever storage spaces and exposed bolt heads to call back to the utilitarian nature of the old model.

Indeed, the material choices Land Rover has made speak to the hard-working nature of the original. There are some harder plastics you won’t find in other Land Rovers, sturdy fabric trims and even a wet suit like material on the dash and doors.

Space is reasonable too, with Land Rover offering the Defender as a seven-seat layout with two extra chairs folded down into the boot floor. It’s a squeeze with seven, but there’s adequate space for two adults or three kids in the second row. 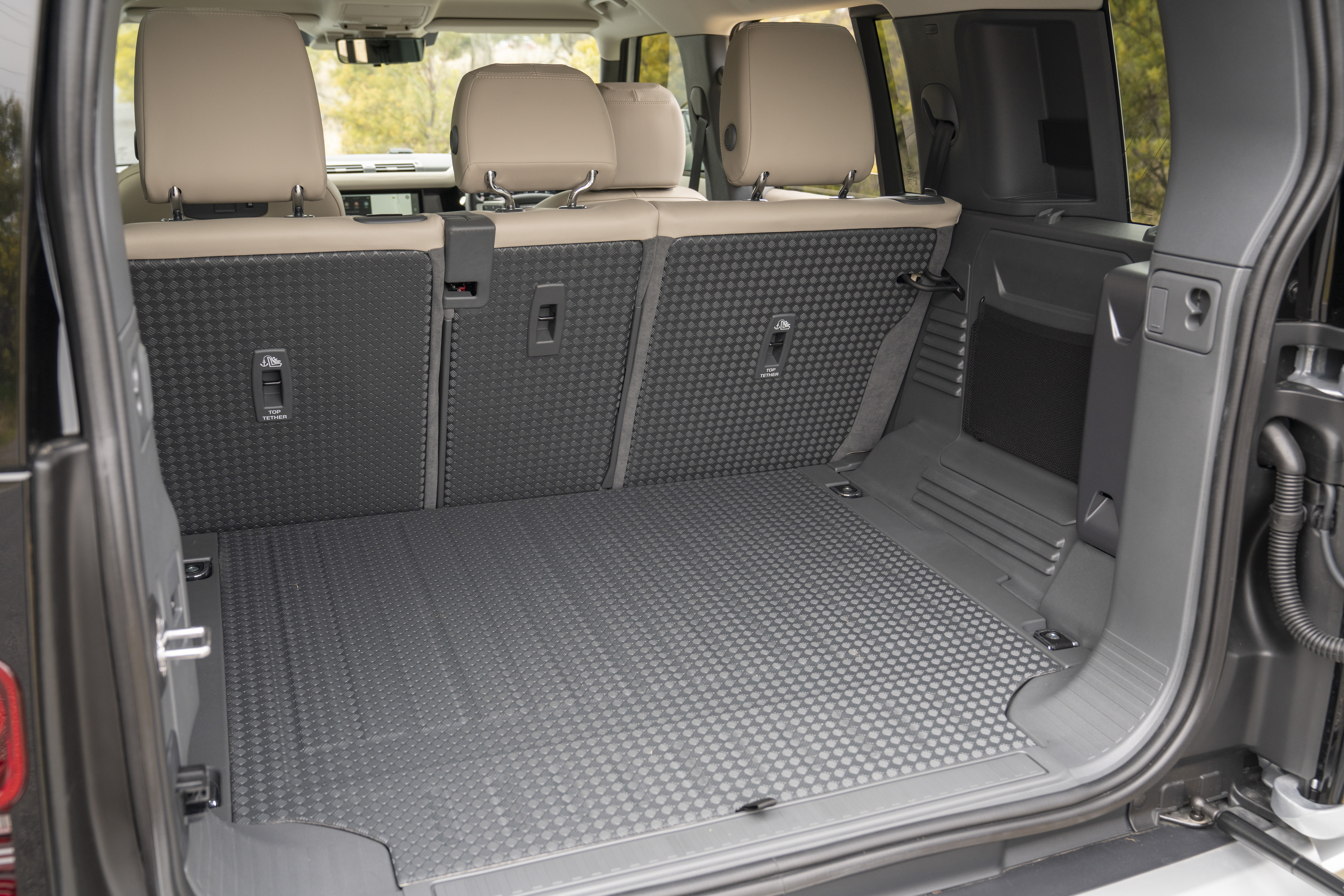 The boot is accessed via a side-opening door (rather than a more modern tailgate) and is a bit small for such a large SUV, offering good width and height but lacking depth. It’s got ample space for a weekend away but if you want to head outback with all your adventure gear it may struggle to swallow it all, but if there’s not enough Land Rover is offering a range of accessories including storage boxes that mount to the side of the car.

That really depends on what you’re looking for, because the Defender P400 S we tested starts at $95,335 (plus on-road costs). So if you just want a rugged, family-friendly off-roader and aren’t worried about the heritage or the badge there are plenty of more affordable options – including the Ford Everest, Toyota Prado and Mitsubishi Pajero Sport.

However, if you value both the ruggedness but also enjoy the look of the Defender and all of the history that lives with the name, then you really don’t have too many other choices. The closest rival in terms history is the Jeep Wrangler (the evolution of the Willys Jeep, fittingly) that tops out at $67,450 for the range-topping Rubicon. However, it doesn’t offer the same level of quality and luxury as the Defender, so there’s a reason for the price gap.

To be completely transparent, I was not a particular fan of the old Defender. My time in it was limited and primarily focused on-road, so I don’t have the kind of fondness for it that so many people do. Which makes it hard to answer the question of how it compares to the original, in terms of living up to the ‘Defender’ name. 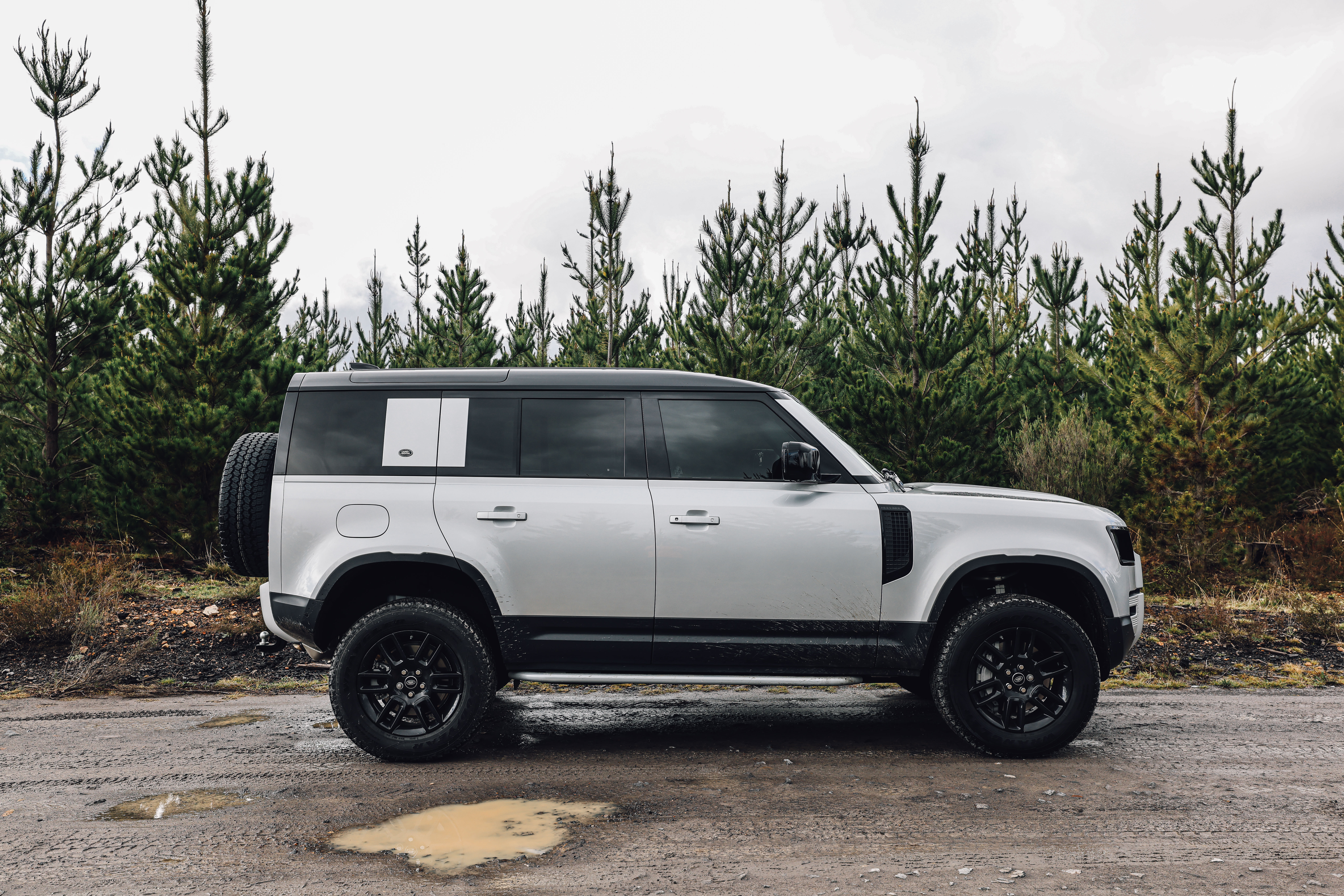 To put it into context that sports car fans would understand better; What would someone say if Porsche hadn’t changed the 911 since the 1963 original and then suddenly dropped the 992 version on us last year?

That’s effectively what Land Rover has done, taken a 70 year leap forward in automotive evolution in one step, and in doing so re-created and re-defined what the Defender is.

Measuring it simply on its merits as a new model in its own rights and ignoring the history, it’s hard not to be impressed with the new Defender. It looks good, drives nicely on-road, has big potential off-road and blends practicality and luxury with a unique style.