A supercar for summer.

Which leaves this car in an odd position, combining the flashiness of a convertible supercar with the purity of rear-wheel drive performance. So does that mean this is a supercar for posers – or driving enthusiasts? Let’s find out.

Lamborghini uses the Huracán for all of its racing activities, including GT3 racing and its one-make Super Trofeo series in various countries around the world. Of course they use the coupe, but certainly there are lessons learnt on the track that filter down to all road-going Huracáns – even the Spyder – even though they may not be obvious.

READ MORE: Is this the ultimate Lamborghini?

It’s the same 5.2-litre V10 petrol engine as the Huracán Evo AWD, but to create some more separation between the two models the Italian firm has detuned it slightly for the RWD models. So it makes 449kW of power and 560Nm of torque; compared to 470kW/600Nm. It gets the same seven-speed dual-clutch transmission, but instead of sending all that power to both axles, it transfers to the road via the rear wheels.
Obviously there’s some weight to be saved by not having front driveshafts and differentials, but that’s lost with the additional measures to strengthen the chassis to compensate for the lack of a roof. That means the Huracán Evo Spyder tips the scales at 1509kg, 87kg heavier than the Coupe AWD.

Naturally the combination of less power and more weight means the Huracán Evo Spyder is slower in all the key areas, most obviously acceleration; managing a 3.5 second 0-100km/h time compared to 2.9 seconds for the coupe. But while that may be a big margin in supercar terms, it’s all relative. To launch from a standstill to 100km/h in just 3.5 seconds means the Huracán Evo Spyder is a suitably rapid supercar.

While it’s easy to dismiss convertible supercars as being for those who enjoy being looked at, the reality is this is a super-rapid machine, capable of providing all the thrills and performance you expect from any supercar. It may lack a few kilowatts and Newton-metres compared to its all-wheel drive siblings, but you don’t really notice on the road.

In large part because it sounds fast, because the V10’s peak power does arrive until 8000rpm, which means you need to keep your foot buried to extract its ultimate performance. At those engine speeds the V10 is making a mechanical scream that is like music to the ears of any true petrolhead.

And the benefit of the Spyder is that you can ditch the roof and hear the engine even more clearly as you right foot pressed to the floor.

Coupe or Spyder? AWD or RWD? It really doesn’t matter when you have an engine as glorious as this one.

One of the major new additions to the Huracán Evo was the Lamborghini Integrated Vehicle Dynamics (or LDVI for short); a new brain for the car that was able to assess the handling in real-time and enhance the handling even further. 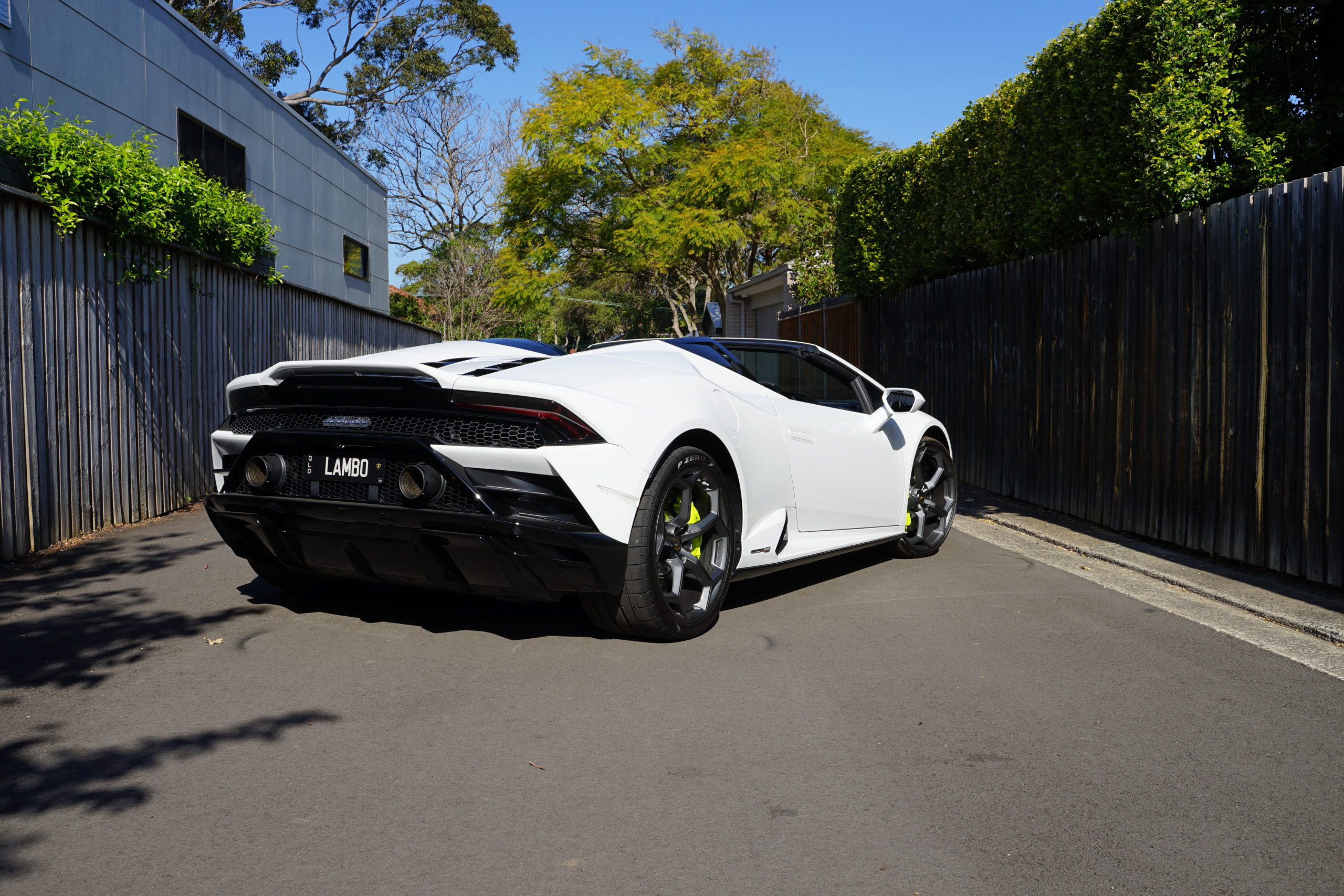 The Spyder RWD misses out but still comes with the three drive modes – Strada (Street), Sport and Corsa (Track) that alter the responsiveness of the engine and chassis. Plus the traction control system has been especially calibrated for maximum rear-wheel drive fun. It also comes with Lamborghini Dynamic Steering (LDS) which features variations of the steering ratio depending on the conditions.

The net result of all this is a crazy fast and infinitely enjoyable driving experience. Sure, some people buy a convertible supercar because it turns more heads, and ultimately it doesn’t feel quite as razor sharp as a coupe, but there’s no questioning the Huracán Evo Spyder is a pleasure to drive.

It’s a thrill to have the roof open, hearing the visceral scream of V10 as the wind blows through your hair as you unleash the Spyder on the open road. This is a driving experience for the senses.

While the Huracán Evo coupe would feel right at home on the track, the open-top Spyder is more suited to an on-road drive. This feels like the perfect car to explore a picturesque region of Italy.

Perhaps a drive down Italy’s stunning Amalfi Coast would be the ideal spot, somewhere to keep the roof down and explore whatever roads take your fancy. The Huracán Evo Spyder would eat up any twist and turn the coastal journey would throw at it.

Design is a key tenet of Lamborghini, every single aspect of its cars must look just right in order to uphold the brand’s tradition. It’s particularly important with the Huracán because underneath the surface it shares a lot in common with the Audi R8, but you’d never know to look at it because Lamborghini has given it a unique design inside (and out). 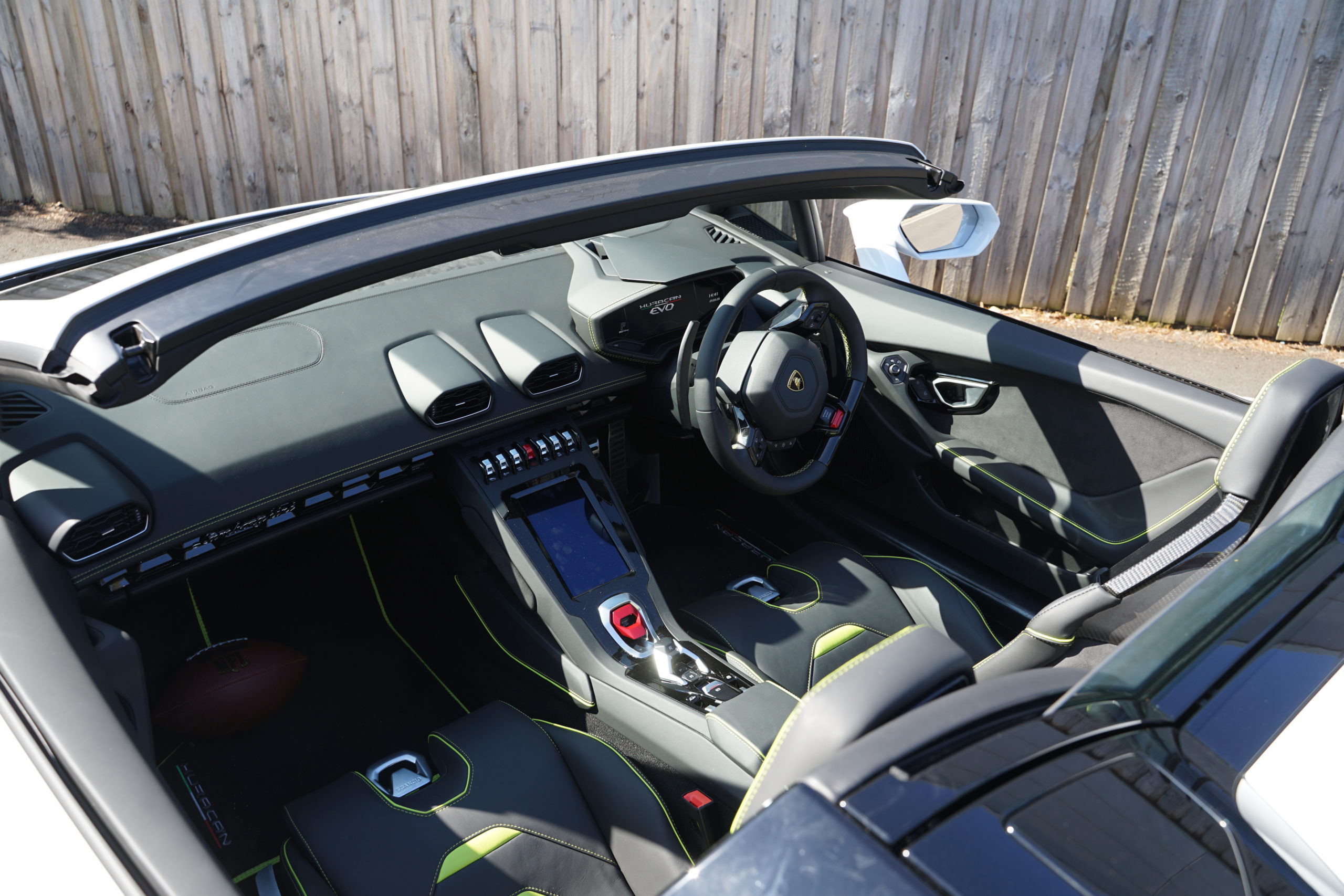 Every single element – from the steering wheel to each switch and button – looks and feels special inside the Huracán. The attention-to-detail is exceptional and helps you understand why it costs more than $400k.

Our test car was equipped with the company’s newest sports seats that not only looked fantastic but were both comfortable and supportive.

As for the roof it stows out of the way in just 17 seconds and can be done on the move so you never get caught out by a sudden rain shower.

The Huracán Evo Spyder RWD is priced from $429,000 (plus on-road costs) and it buys you a very fast convertible. However, like most premium models, the Huracán Evo comes with an extensive and expensive list of optional extras, which means the more you tailor the car to your taste the more you’ll spend. Our test car ended up at nearly $520,000 after all of its options were added – including $13,690 for the sports seats, $12,970 for the front axle lift kit, $8410 for the 20-inch alloy wheels, $6480 for the smartphone interface with Apple CarPlay and even $480 for stitching on the steering wheel. It’s hard to say any car costing more than $400k is good value, especially when it doesn’t come with a standard reversing camera (that’s an extra $3850) or digital radio (that’ll cost you $1450) so clearly there’s some room for improvement when it comes to the value package Lamborghini offers local customers.

Not that Lamborghini is alone in this regard and the Huracán Evo Spyder is priced competitively against its rivals; the Ferrari F8 Spider starts at $536,888, the McLaren 570S Spider is priced from $435,750 and the Porsche 911 Turbo S Cabriolet kicks off at $417,500.

Putting aside the value equation, because there’s such an emotional appeal about buying a Lamborghini that it can’t strictly be judged on the statistics alone, the Huracán Evo Spyder RWD is certainly a car I’d enjoy having in my driveway.

Sure, the coupe is the better choice if you want ultimate performance and don’t care if people see you driving or not. But there’s something about the wind in your hair and the sound of the wailing V10 that makes the Spyder tug at your heartstrings.