Without doubt this is the craziest new vehicle on sale in Australia today – it’s an SUV initially designed to be off-road capable but is now packing one of the most potent engines in the world under its bonnet.

The Trackhawk is the American response to the likes of the Porsche Cayenne Turbo, Mercedes-AMG GLE63 S, BMW X5 M and Audi SQ7. But unlike those European models that have opted for technology and precision, Jeep is just using cubic inches… and a big supercharger.

The engine is nicknamed the Hellcat and it’s fantastic. Old school American muscle for the 21st century stuffed inside an SUV to ensure nobody is ever late for football practice again.

Obviously the Grand Cherokee is not a racing car so it has zero motorsports pedigree, but the Hellcat was born for the dragstip. Dodge initially built this engine for its Challenger coupe to appeal to the vast US audience that enjoys running the quarter-mile. But Australia’s appetite for SUVs managed to convince the Fiat-Chrysler bigwigs to slide the Hellcat into the Grand Cherokee to create the Trackhawk. 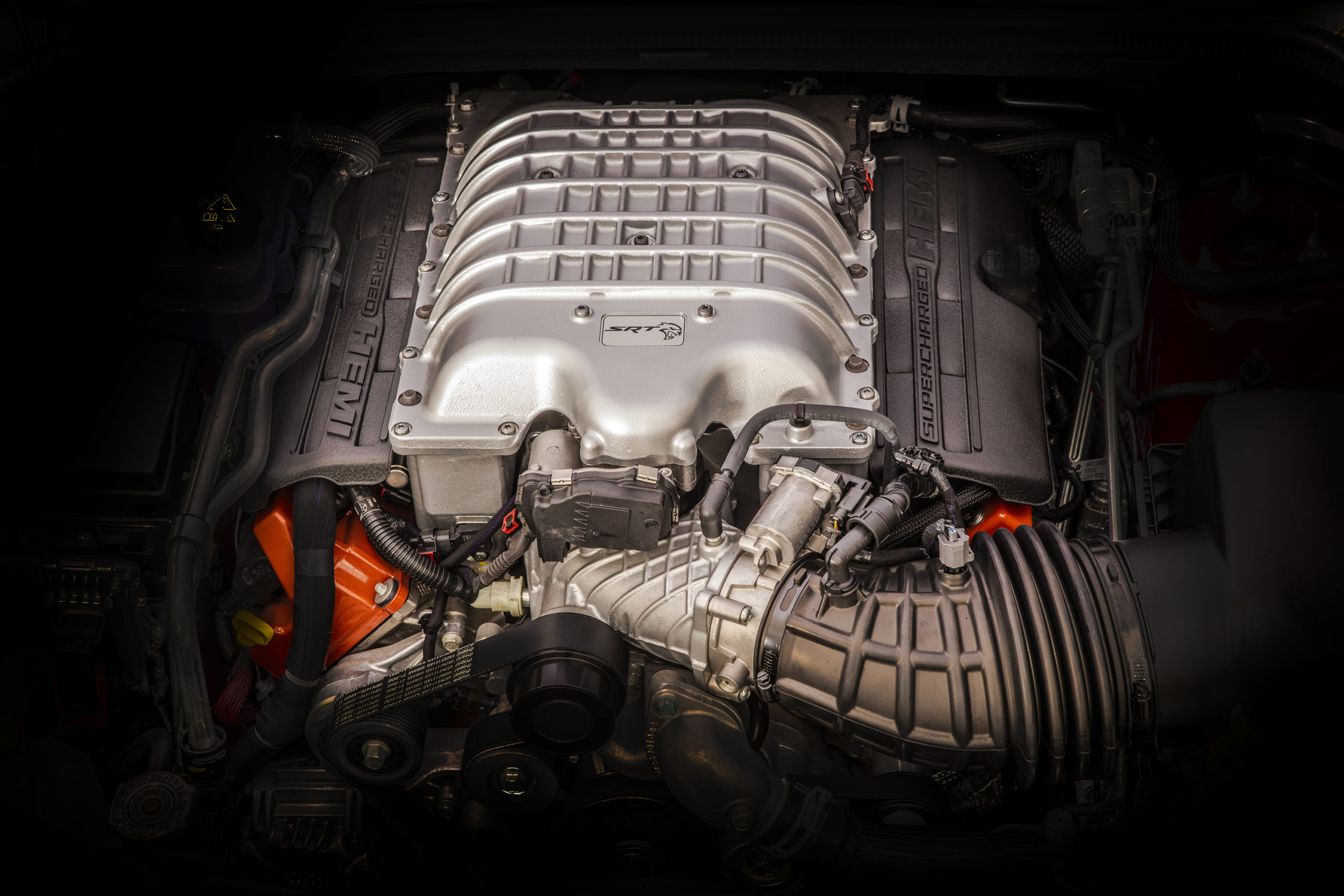 The heart of the Grand Cherokee Trackhawk is its awesome engine

Enough teasing, here are the details you need to know about the Trackhawk. It has a 6.2-litre Hemi V8 with a supercharger to pump out 522kW of power and 868Nm of torque. Typically if you want more than 500kW you need a Ferrari, Lamborghini or McLaren, but Jeep has made this kind of bulk horsepower available at a lower price – and in a very different package.

And it lives up to the hype its numbers generate. Hellcat is an appropriate name because this engine is a beast; the V8 growls, the supercharger screams and it makes a five-seat SUV move faster than it seems possible. Jeep’s four-wheel drive system means it doesn’t struggle for traction despite its monstrous grunt.

When you put your foot down not only does it accelerate with ferocity (it has a 3.7 second 0-100km/h claim!), but if you can keep your foot in it, it just keeps pulling like a steam train.

The obvious catch for such a big engine is such a heavy SUV is fuel economy – or lack of economy. The official combined city/highway cycle figure is 16.8-litres per 100km, but around town expect to see low to mid 20L/100km. And if you keep extracting maximum power from the engine all the time, you may want to buy shares in your local fuel company. 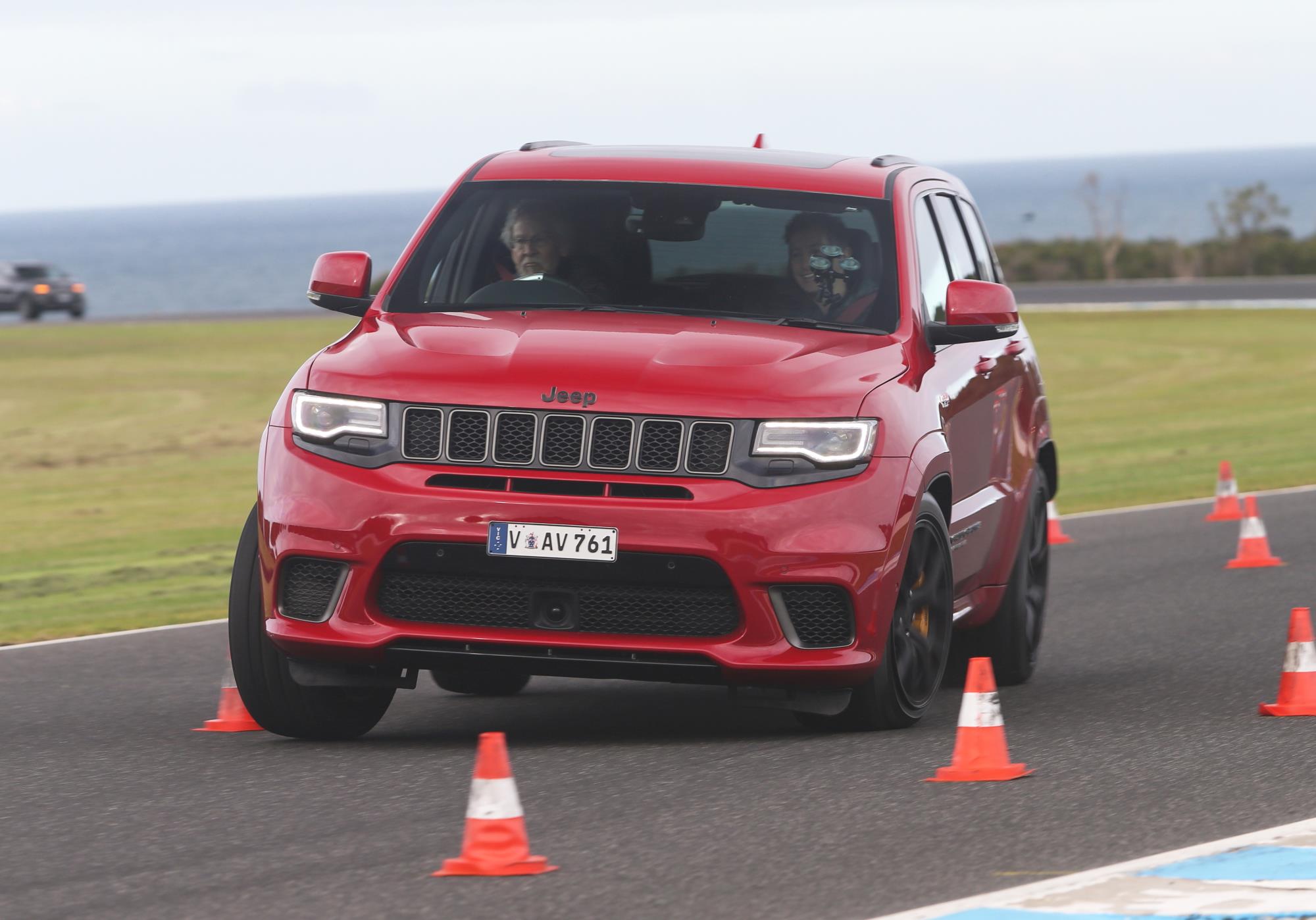 The Grand Cherokee is certainly a well-mannered SUV but it’s still a tall vehicle weighing more than 2400kg so it doesn’t have the kind of dynamic capability of its fellow 500kW club members. Jeep has added “High Performance” suspension with adaptive dampers but throw the Trackhawk into some corners and it pitches and rolls around but it does hang on.

The drag strip is the best place to really enjoy the Trackhawk to its full potential. If Australia had unrestricted highways like Germany it would be great to wind it up and see how long it would run for, but as that’s not possible unleashing it on the quarter-mile would be the next best thing. 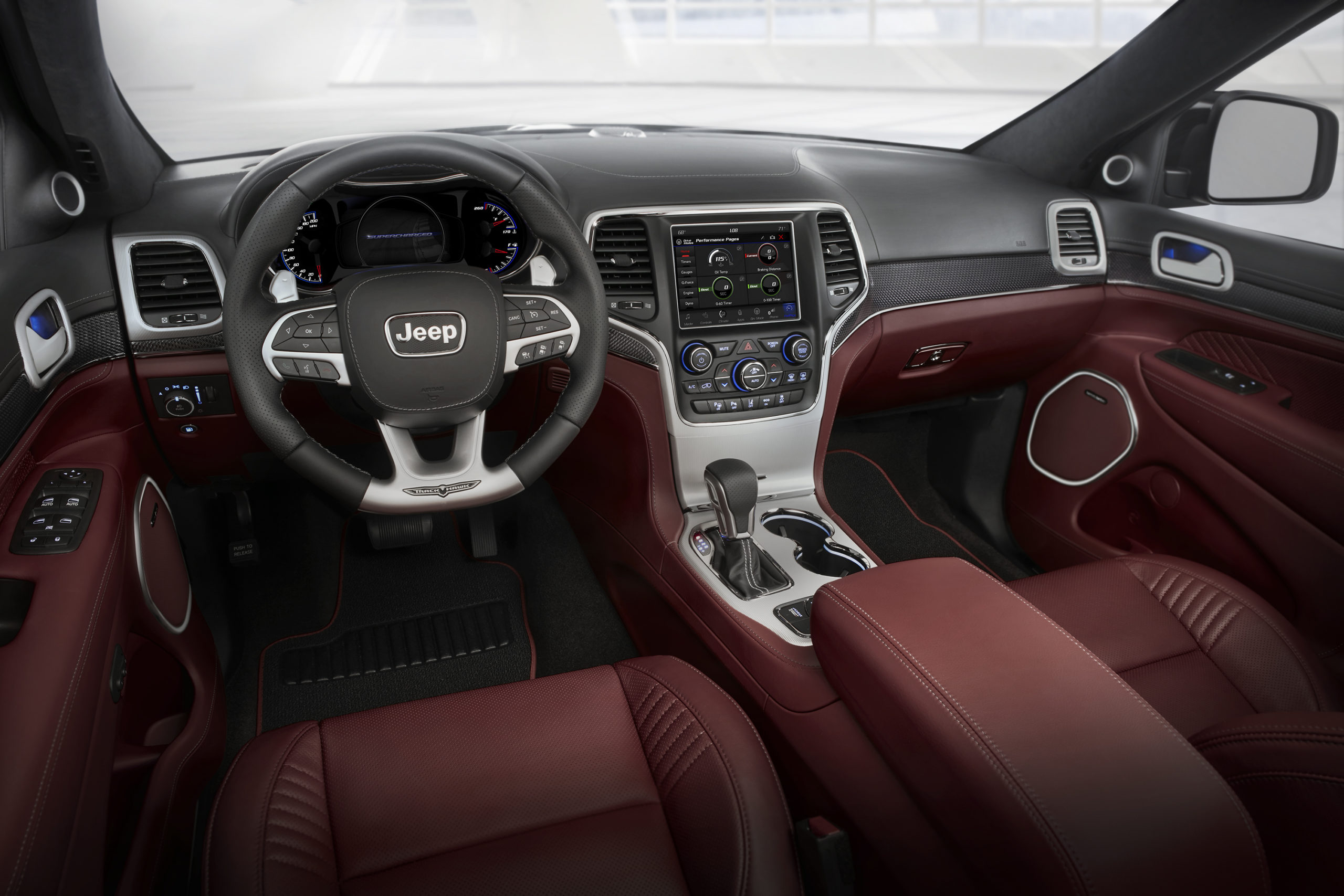 The interior of the Grand Cherokee has held up reasonably well

The Grand Cherokee was the vehicle that helped to rebuild the brand after years of criticism for its poor designs and build quality. While it has suffered a lot of recalls for various issues, the design of the cabin has stood up well given it’s now in its ninth year on sale.

Is it as refined as its European rivals? No, but it’s a lot cheaper and offers good usability, with plenty of space and small item storage spread around the cabin. It’s a genuine five-seat SUV, so it makes for a very rapid parent’s taxi. The Trackhawk is priced from $134,590 (plus on-road costs) which is a lot of money for a Jeep that’s getting on in years. But compare it to the alternative super-SUVs and it starts to look like great bang-for-bucks. The Porsche Cayenne Turbo starts at $241,600, the BMW X5 M Competition is priced from $209,900 and the Mercedes-AMG GLE63 S will set you back $203,470. Are they better, more polished and refined SUVs? Yes, but for a lot less the Trackhawk will give you similar mind-blowing performance.

There’s a lot to like about the Trackhawk. It’s acceleration, soundtrack and sheer craziness makes it very loveable. I’d certainly have it on my short-list for hi-po SUVs.