On the surface this is the first SUV from the still relatively-new luxury brand, Genesis. But it’s actually a whole lot more than that.

Genesis, for those who don’t know, is the premium off-shoot from Hyundai – in the same way Toyota created Lexus. There have been Genesis models in Australia for a few years now but officially the brand only launched in 2019 with the arrival of the G70 compact sedan (which we recently reviewed) and the G80 executive sedan; as well as the opening of its flagship ‘Store’ (not dealership) in Sydney’s CBD.

But regardless of how good or bad the G70 and G80 were, the luxury car market has shifted to SUVs, so the arrival of the GV80 is the first real test for Genesis. How it fares will be the first genuine indication if Hyundai is on a hiding to nothing with its new spin-off or if it can really be a player against the likes of Audi, BMW and Mercedes-Benz.

No, Genesis doesn’t have any motorsport background and certainly hasn’t competed with the new GV80 in anything. But, as we explained in our G70 review, Hyundai has hired some key players with suitable heritage to lead the Genesis program. 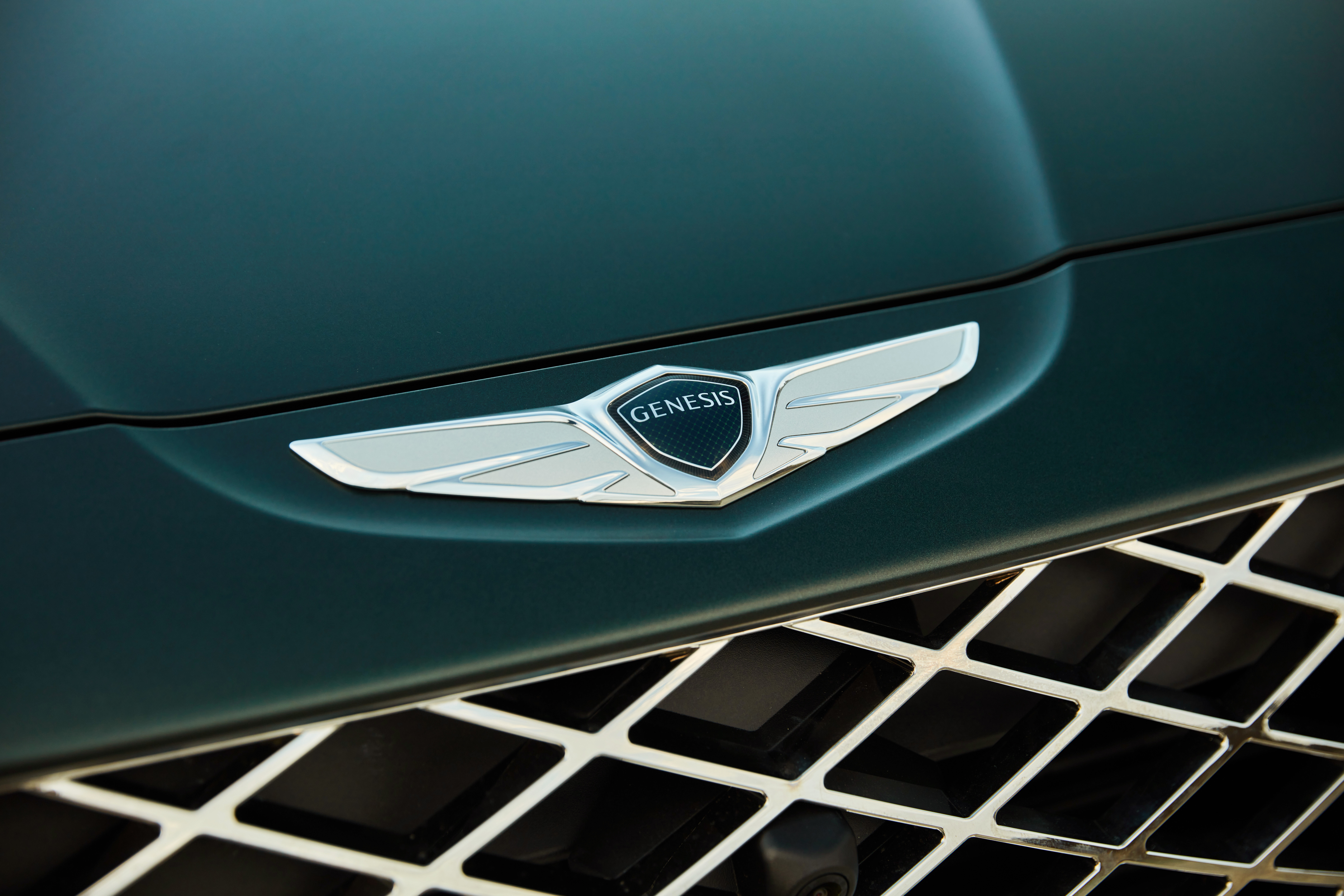 Most notable is Albert Biermann, the former head of BMW M Division who is responsible for all high-performance car development for Hyundai and Genesis. He personally oversaw the creation of the new ‘M3 platform’ that underpins both the GV80 and the upcoming new G80 sedan.

There are three choices for the GV80, and like the platform, all are new. There’s a 2.5-litre four-cylinder turbo petrol, 3.0-litre inline-six turbo diesel and a 3.5-litre twin-turbo V6 petrol. 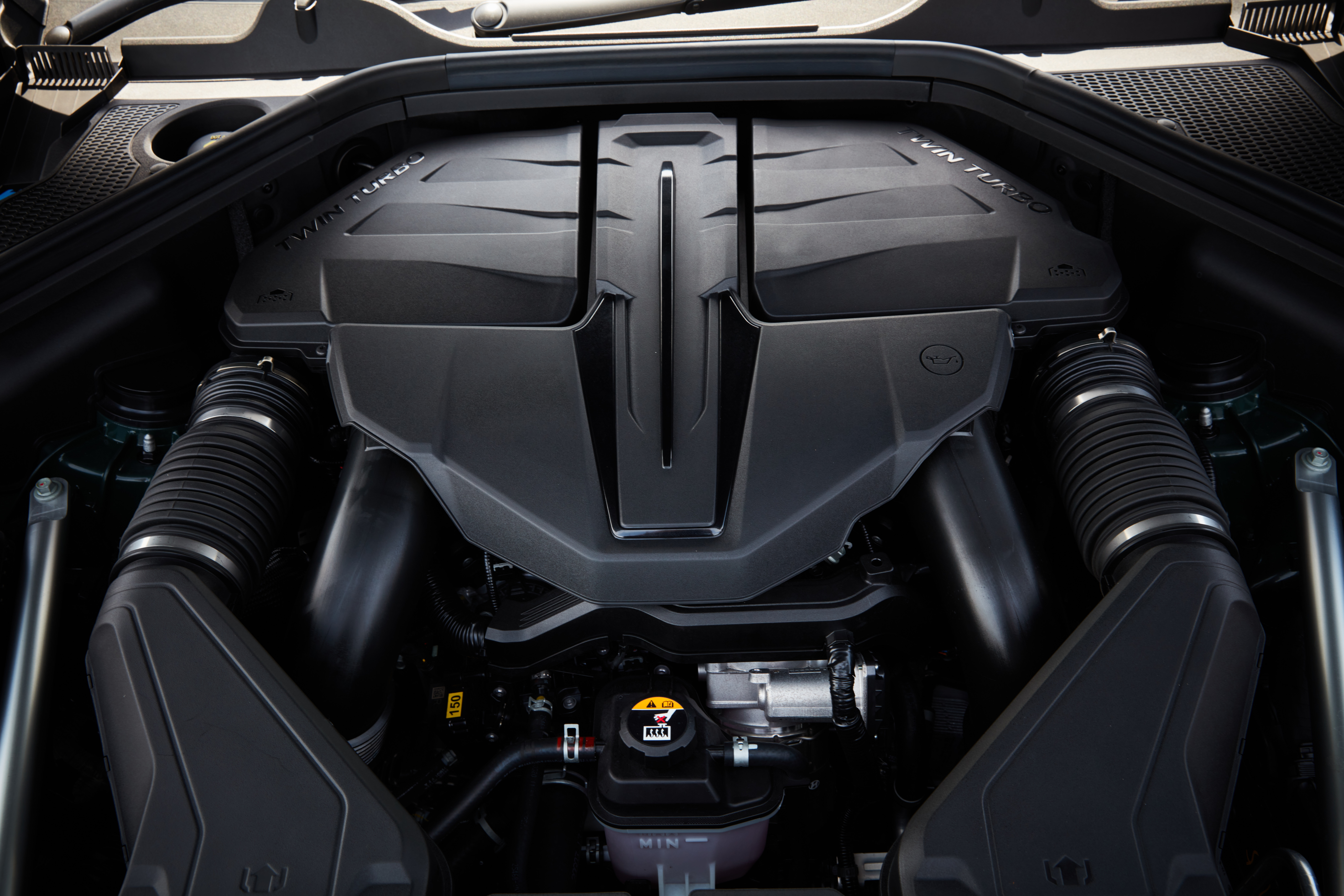 The 2.5T makes 224kW of power and 422Nm, is paired to an eight-speed automatic transmission and is available with either rear- or all-wheel drive. It does a solid job and would be fine for urban duties, but it feels laboured at times on the open road.

The 3.0D is good for 204kW and 588Nm and also gets mated to the in-house eight-speed auto but is only available with all-wheel drive. It offers up good pulling power and is the pick for those concerned about fuel economy; returning a claimed 8.8-litres per 100km compared to the petrol V6 which uses 11.7L/100km.

The engine we’ll focus on here is the 3.5T which makes 279kW and 530Nm. It gets the same eight-speed ‘box and all-wheel drive, but also gets an electronically-controlled limited-slip differential (eLSD).

This is the choice for those looking for the best combination of punch and luxury. The V6 offers up easy performance on the road, pulling strong across the rev range with its broad spread of torque. It‘s well matched to the eight-speed auto, which allows it to have the flexibility to either quietly cruise through the city and suburbs with minimum effort or keep the engine on the boil to extract best performance on the open road.

Genesis claims a 5.5 seconds 0-100km/h time for the GV80 3.5T and that feels a smidge optimistic, but certainly the V6 pulls hard given how much SUV it has to move.

It’s also worth noting just what a nice noise it makes. There’s impressive levels of noise suppression inside the cabin, but you get a clear listen to the throaty V6 rumble the engine makes which is a suitably premium touch.

One of the keys to Hyundai’s growth in the last decade – both in terms of sales and perception – is the local operations insistence of locally tuning the steering and suspension of its cars to ensure they are well-suited to Australia’s unique road conditions (fast flowing country roads are common but so are imperfect surfaces, unlike the smoother roads of Europe and Korea). 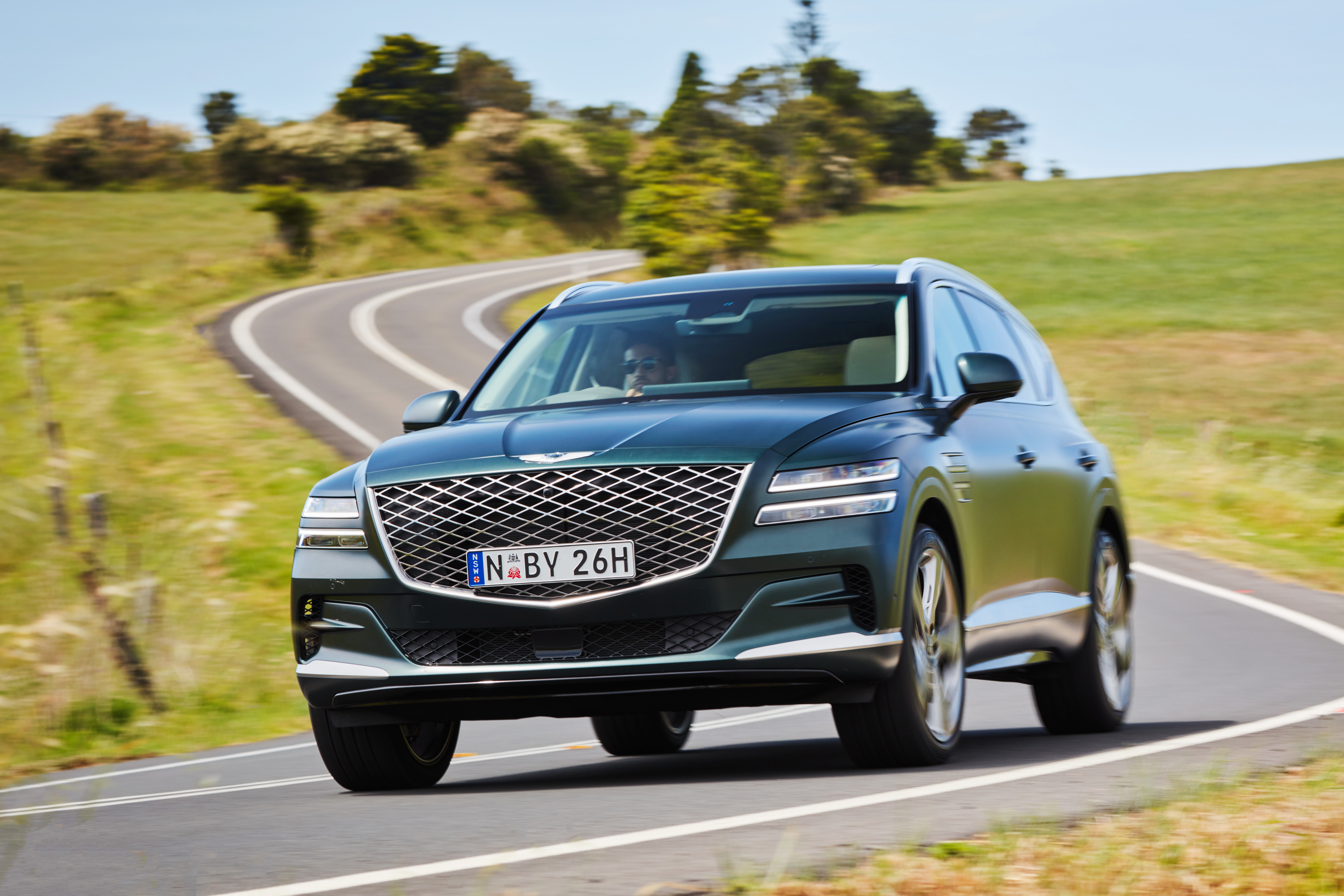 Naturally they haven’t cut corners for Genesis and have undertaken a six month local ride and handling optimisation program to fine tune it to Australian tastes.

That’s particularly important because the GV80 sits on the all-new M3 platform (which also underpins the G80 sedan and will likely spin-off more models) so it needed to be sorted from scratch.
The result is an impressive SUV to drive and one that can genuinely compete against the likes of the Audi Q7, BMW X5, Lexus RX and Mercedes-Benz GLE on the road. The overall feeling from the chassis is a sense of confidence – offering good road holding whilst also being comfortable.

The comfort level is impressive given we spent the majority of our test drive in a GV80 fitted with the larger 22-inch alloy wheels (the larger rims are standard on the 3.0D and 3.5T, while 20-inch alloys are available on the 2.5T). The suspension did an admirable job of soaking up the bumps, dips and blemishes on the back roads outside Canberra we tackled on our test route.

It’s notably softer than its German rivals, particularly the taut X5 and GLE, so while it isn’t quite as responsive and dynamic as those two, it does make for a more compliant ride on our patchy roads.

Not that the GV80 doesn’t handle well. The steering is nicely sorted for a big SUV too – this is a seven-seat SUV after all – so you can tip it into corners with confidence.

Just as importantly in 2020 is its ability to drive itself, so the GV80 is available with a range of active safety features that imbue it with a level of mild-autonomy. There’s adaptive cruise control, lane keeping assist, lane following assist, rear cross-traffic alert and blind spot collision avoidance to keep you safe and help you behind-the-wheel. 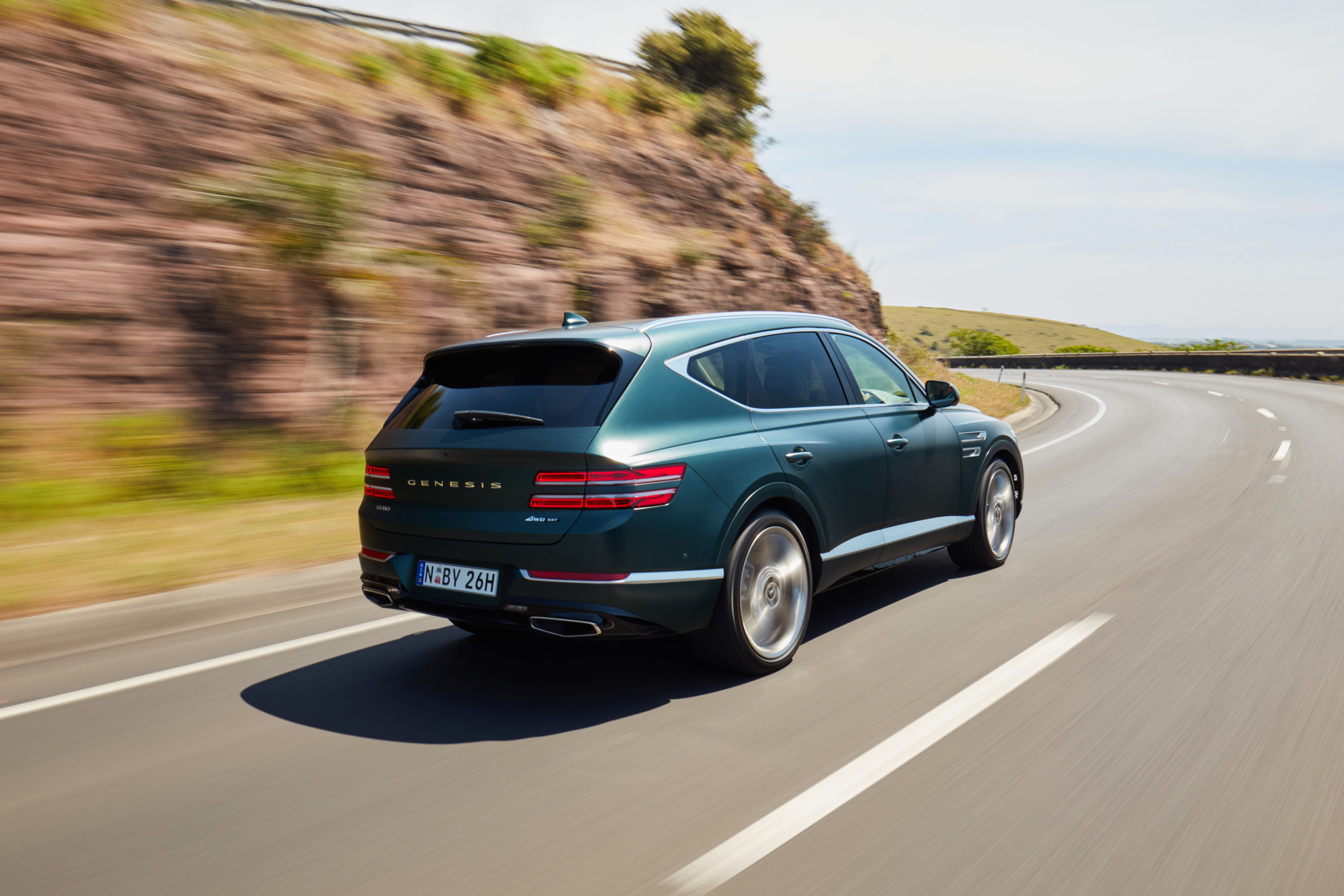 Our test route in the GV80 took in the undulating, open roads that circle Australia’s capital; it’s some of Australia’s best roads and a good challenge for any car.

It’s the type of drive a BMW X5 or Audi Q7 would shine on, so the fact the GV80 did an impressive job suggests that on pure mechanical terms Genesis can hold its own against its more established competition.

Uniquely Genesis, which is a step forward from the Hyundai-like interior of the original G80 and G70. With this all-new platform Genesis really embarrassed its place as a luxury brand and pushed the boundaries of design. Under the guidance of former Lamborghini and Bentley designer Luc Donckerwolke, Genesis’ team have taken inspiration from modern Korean architecture and the idea of the “beauty of white space” as a theme.

That translates to a horizontal layout that sees the dashboard wrap around the entire width from door-to-door in a sweeping shape. Into that design they have integrated a 12.3-inch digital instrument panel as well as a 14.5-inch infotainment touchscreen. There’s also an integrated controller for the infotainment system that has both a dial and handwriting interface, that’s mounted between the front seats next to the tempered glass rotary gear selector.

The seats are trimmed in leather as standard, with fine Nappa leather with a unique pattern available as an option. There’s also genuine wood inlays on the centre console and doors, which is a credit to the quality and attention-to-detail Genesis has put in. 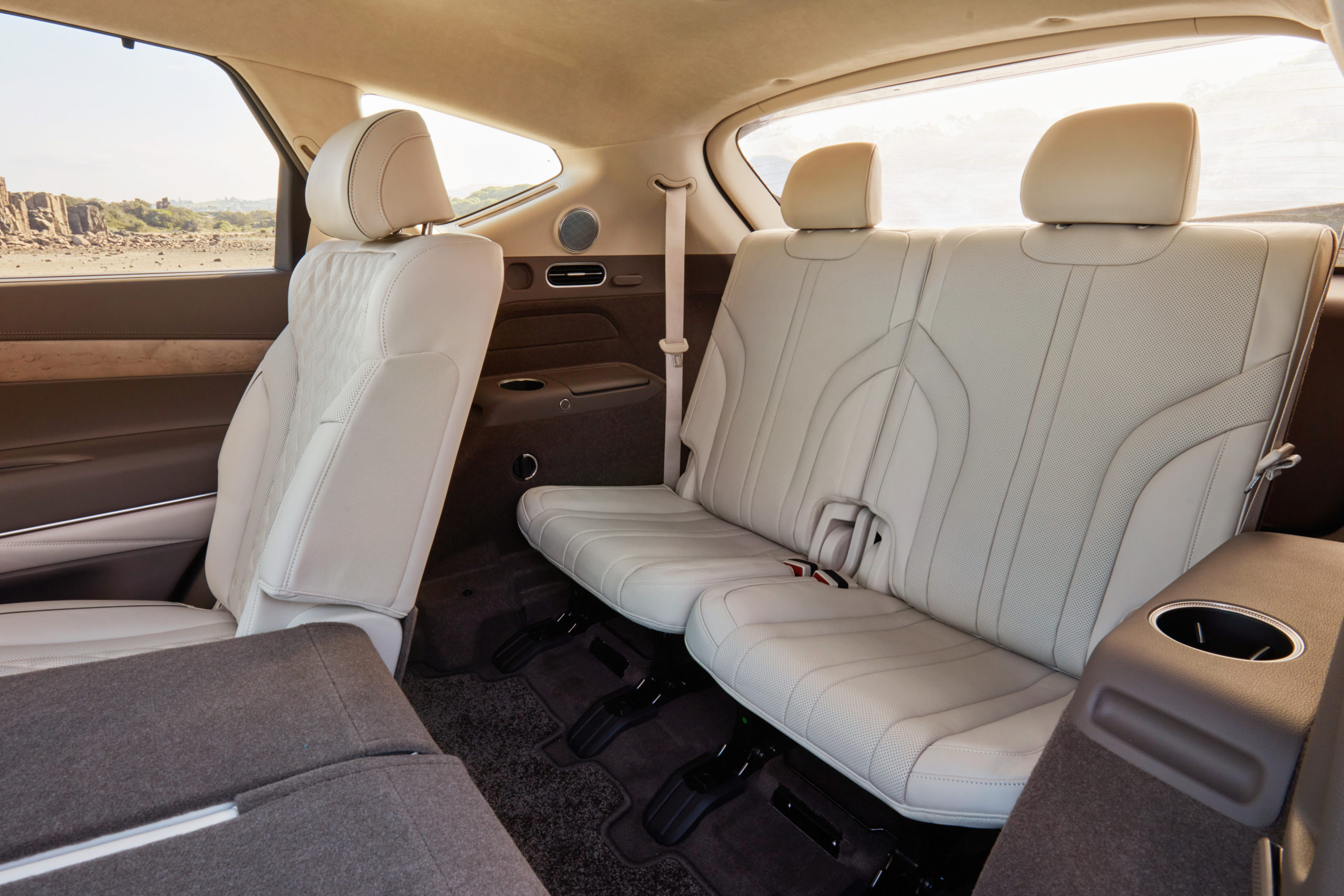 The entry-level 2.5T RWD is only available with five seats but the rest of the range comes with seven seats as standard. There’s good space in the first two rooms but the third row is really only for smaller kids thanks to its lack of both kneeroom and head space.

In order to compete against the big German trio (Audi, BMW and Benz), plus Lexus, Volvo, Land Rover and Jaguar, Genesis is pushing for a strong value argument. Importantly the prices listed here are fixed, which means Genesis won’t be offering discounts or deals because it believes customers don’t enjoy the haggling experience.

It’s entry-level model, the 2.5T RWD starts at $90,600 (all prices exclude on-road costs) while the 2.5T AWD is $95,600, which is significantly cheaper than the most affordable offerings from the Germans. 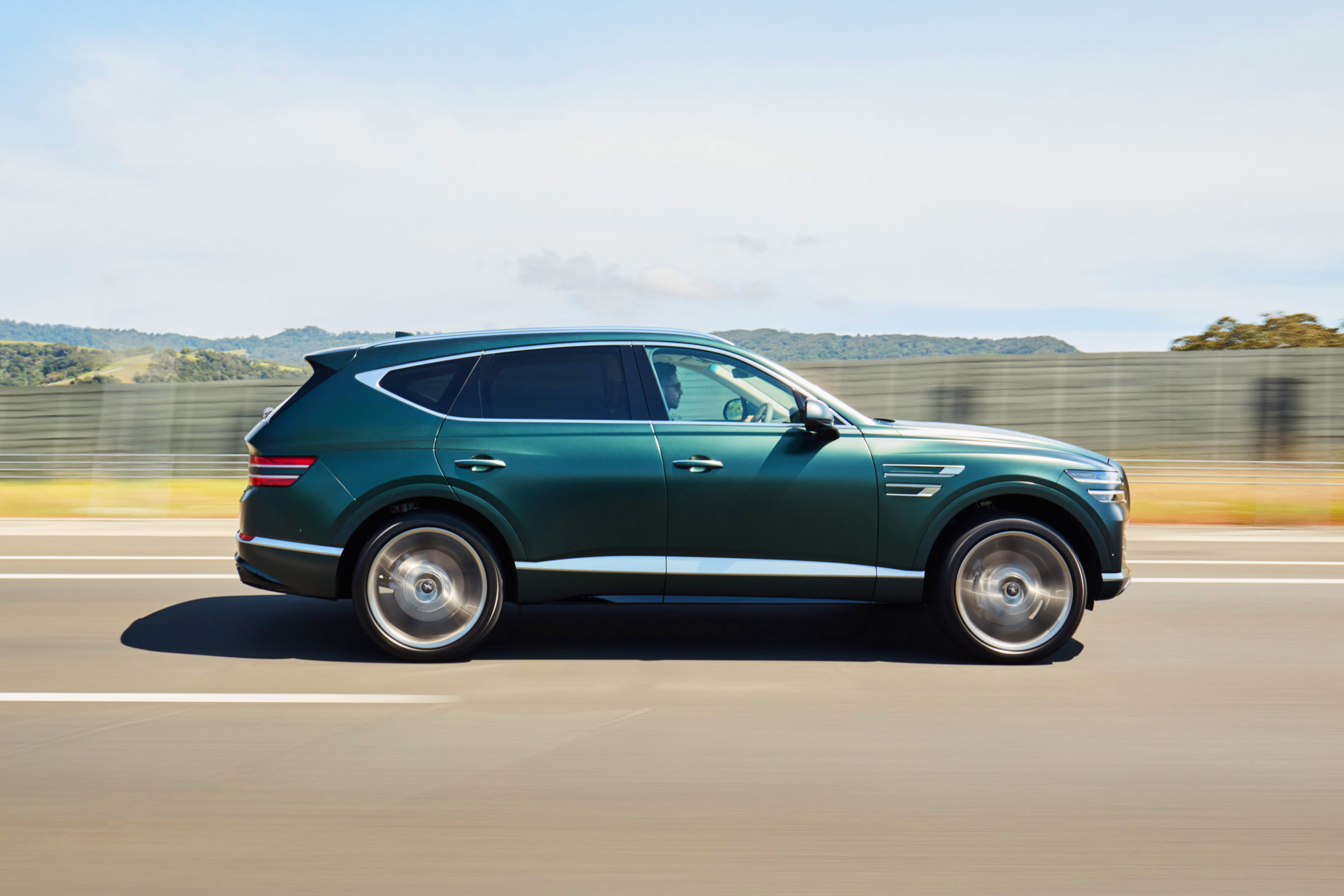 The only option is the Luxury Package which costs $10,000 and adds a load of goodies including the Nappa leather, remote smart parking assist and power second and third row seats.

You can also get a matte paint for an extra $2000 which adds another level of luxury to the look of the GV80.

This is the only question that really matters for Genesis. The company has certainly built a good luxury SUV – it looks suitably premium, has a nice range of engines, a comfortable interior and polished road manners – but Genesis is still a relatively unknown badge in Australia.

People’s reasoning for buying a luxury car is heavily biased by the image the car and the brand project, so it will take a lot of convincing from Hyundai and Genesis to lure buyers away from the likes of the Audi Q7, BMW X5, Lexus RX, Mercedes-Benz GLE and Volvo XC90. 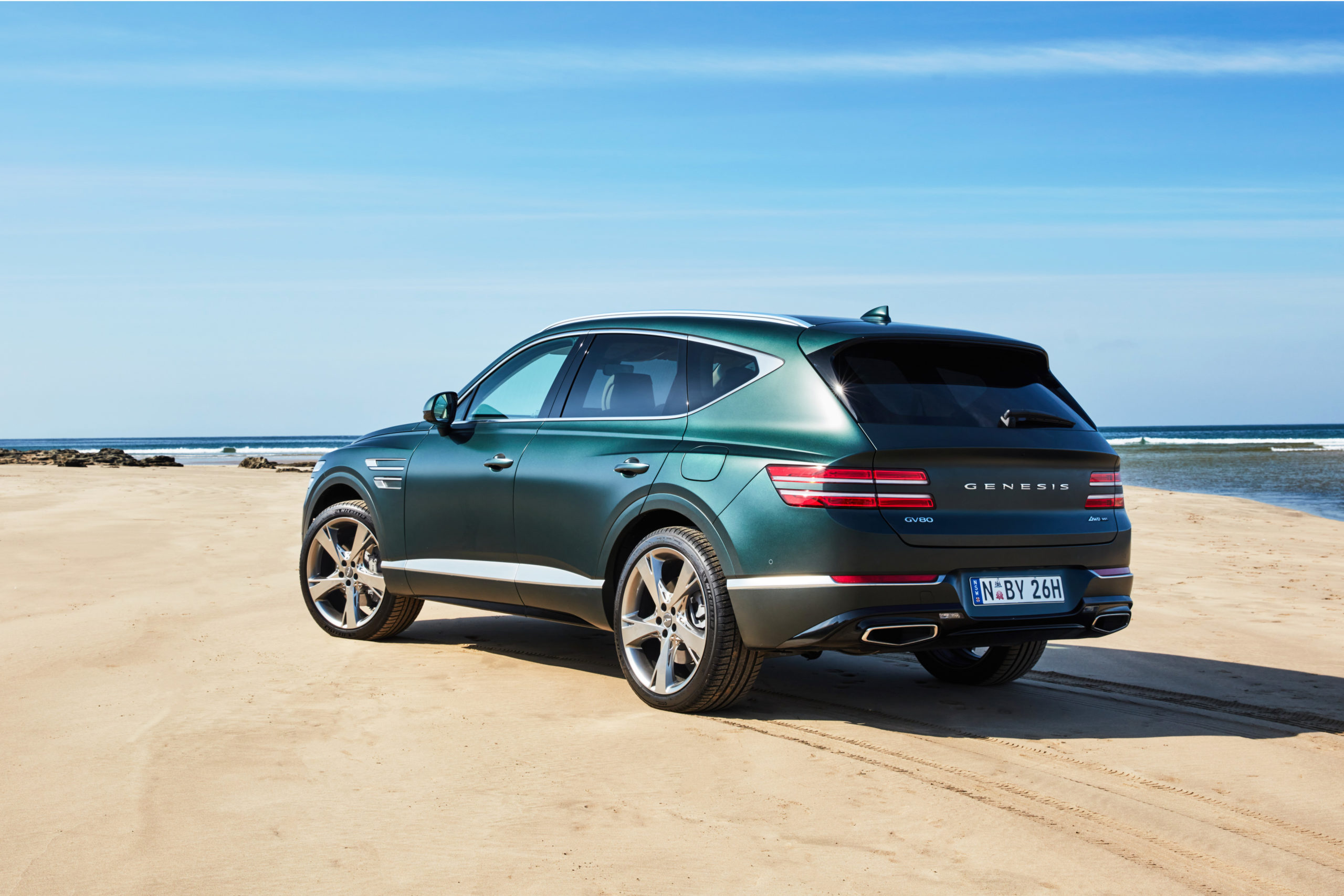