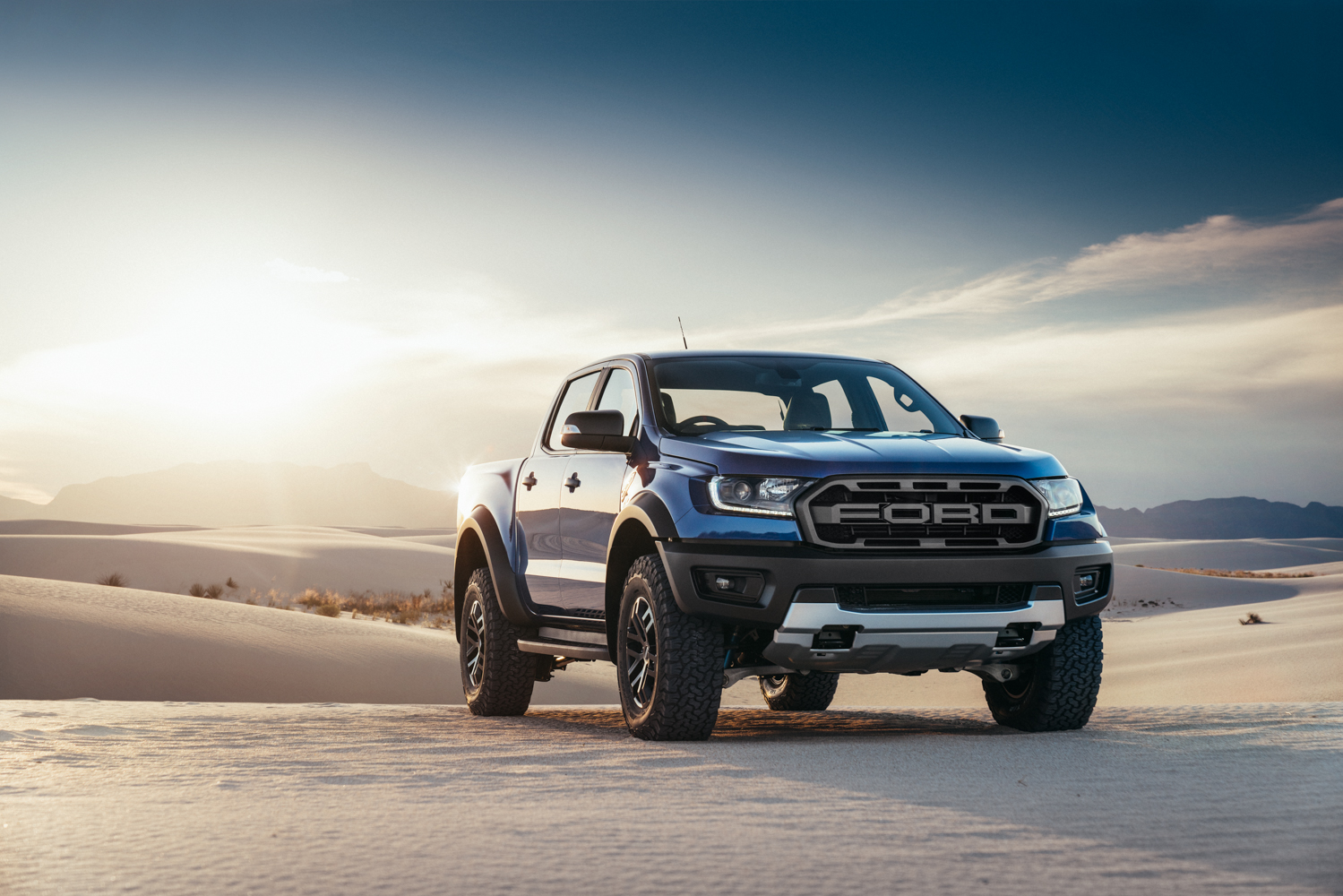 The first truly high-performance ute to go on sale in Australia. The Ranger Raptor is also the ideal vehicle for its time, capturing the market’s demands for dual-cab utes that are more about making a statement than driving you to and from the work site.

The Ranger follows in the pumped-out wheel-tracks of the US F-150 Raptor, which has been a flagship of the brand’s pick-up trucks for the past decade. The Ranger Raptor sits in the same Ford Performance family as the Mustang, Focus ST and Fiesta ST but instead of being designed for on-road or racetrack performance, the Raptor is all about enjoying yourself in the dust and the mud.

In order to carry the Raptor name the Ranger had to survive a 1000-mile high-speed torture test by Ford engineers, inspired by the Baja 1000 off-road race. That’s because the Baja 1000 is the pinnacle of flat-out desert racing, where Trophy Trucks designed to look like F-150s race and leap through the Mexican wilderness.

And this isn’t just a marketing gimmick, Ford Australia engineers had to drive the Raptor off-road, at high-speed for 1600km (1000-miles) to ensure it was worthy of the badge.

Ford still uses the actual race to test its machines too, last year it entered the event in a prototype featuring elements of the upcoming revived Bronco (which is an SUV version of the new US-spec Ranger). Ford used the Ranger Raptor as the launch pad for the then-new 2.0-litre twin-turbo four-cylinder diesel engine – with mixed results.

For starters, 2.0-litres looks small on paper when it’s replacing the existing 3.2-litre five-cylinder turbo diesel available in the rest of the Ranger line-up. And it offers only a modest 157kW of power, which also doesn’t look exciting when you look at the spec sheet.

However, with its pair of turbochargers it manages to extract 500Nm of torque, which is a lot of pulling power and makes the Raptor feel punchy; although it never really feels quick either on- or off-road. The claimed 0-100km/h time of 10.5-seconds is hardly going to have you heading down to the local drag strip anytime soon.

But there’s more good news with the transmission, a 10-speed automatic unit that helps extract the best of what’s available from the engine. With its wide spread of ratios it’s able to keep the engine in its sweet spot so it generally gives its best.

It also means it has good rolling acceleration, so once you’re up and running it feels at its best, responding quickly when you put your foot down.

While hardly a match for the 5.0-litre V8 in the Mustang or the 2.3-litre turbo four in the Focus ST, this is meant to be a different take on the idea of performance, and the Ranger Raptor’s 2.0-litre does an admirable job for its small size.

But that hasn’t stopped calls for more grunt for the next-generation Ranger Raptor, with rumours the blue oval will try and squeeze a V8 under the bonnet – or at least pack more punch with a V6 option. While the engine may split opinion the way the Raptor drives doesn’t. The Ford Performance engineers have added racing-inspired Fox shock absorbers, widened the track and fitted all-terrain BF Goodrich tyres for maximum off-road performance.And it excels in the right conditions – fast, dusty and slippery off-road tracks are where the Raptor feels most at home.

It has six driving modes – Normal and Sport for on-road driving then Grass/Gravel/Snow for slippery conditions, Mud/Sand for the best traction on soft ground, Rock mode for climbing over hard surfaces and finally Baja mode.

Dial up the Baja setting and it unleashes the tuning for high-speed off-road driving, allowing full power, the most response and even some slip angle so you can slide around.

The Fox shocks are a key component of the Raptor’s ability and do a remarkable job of soaking up big bumps and dips. Heck, hit a big enough obstacle fast enough and the Raptor can even fly – although that may void the warranty, so be careful.

Of course, the funny thing about all this finely-tuned off-road ability is the positive impact it has on the way the Raptor handles on sealed roads. While utes may have become family transport and daily drivers for so many in recent years, despite the significant progress made in refining their handling they still tend to feel big, heavy and slow. But not the Raptor.

The steering is nicely weight and more direct than a regular Ranger and the ride, while still jittery at times (especially with no weight in the tray) it feels more compliant than any of its rivals.

The Baja 1000 is the obvious answer, but the Ranger is an Australian-led project for Ford so it feels at home in our outback. Wide open space, rutted roads and muddy tracks are all playgrounds for the Raptor. 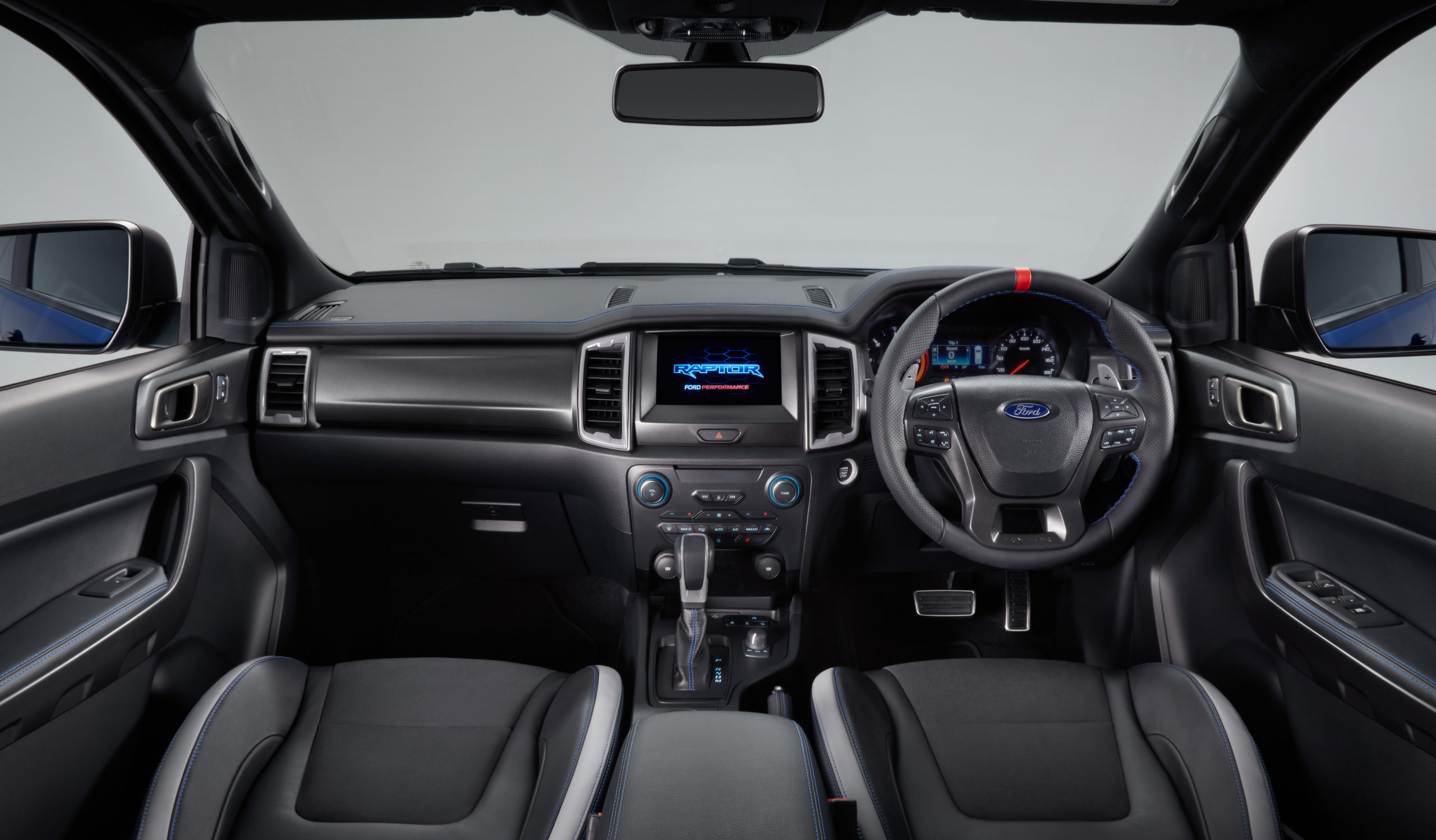 Befitting its place at the top of the Ranger structure – both in price and performance – there are some unique touches to help ensure the cabin is suitably special.

There are ‘Performance’ seats that boast extra side bolsters to keep you snug when you’re sliding and jumping around, as well as a sports steering wheel and blue stitching throughout the cabin.

On the surface paying more than $76k for a dual-cab ute seems outrageous. Only five years ago such a price tag would have seemed laughable, but these days the Raptor isn’t even the most expensive ute by far.

While it certainly isn’t cheap, it arguably represents good value for what it is. It’s capable and comfortable enough to drive every day without complaint, but also offers a wider off-road performance envelope – two elements that make it stand out from the crowd.

I’d certainly have a Ranger Raptor in my dream garage roster. In a period where utes are getting more expensive and more upmarket the Ford marks itself as something unique. And, even more than that, it’s a vehicle that is just a blast to drive, on par with its more traditional Ford Performance siblings, the Mustang and Focus ST.