An Australian take on an American pony car icon.

Ford Australia needed something special to cap its local range, and with the US-built Shelby GT350 and GT500 unavailable they turned to local Ford tuner-extraordinaire, Rob Herrod. His company, Herrod Performance, is the biggest purchaser of Ford Performance parts outside the US and has spent decades upgrading Falcons, and more recently, Mustangs.

Herrod and his team worked with the Ford Performance in Australia to elevate the Mustang GT with a raft new components, including a supercharger, bigger brakes, new wheels, revised suspension and new aerodynamics to make the R-Spec a homegrown muscle car hero. 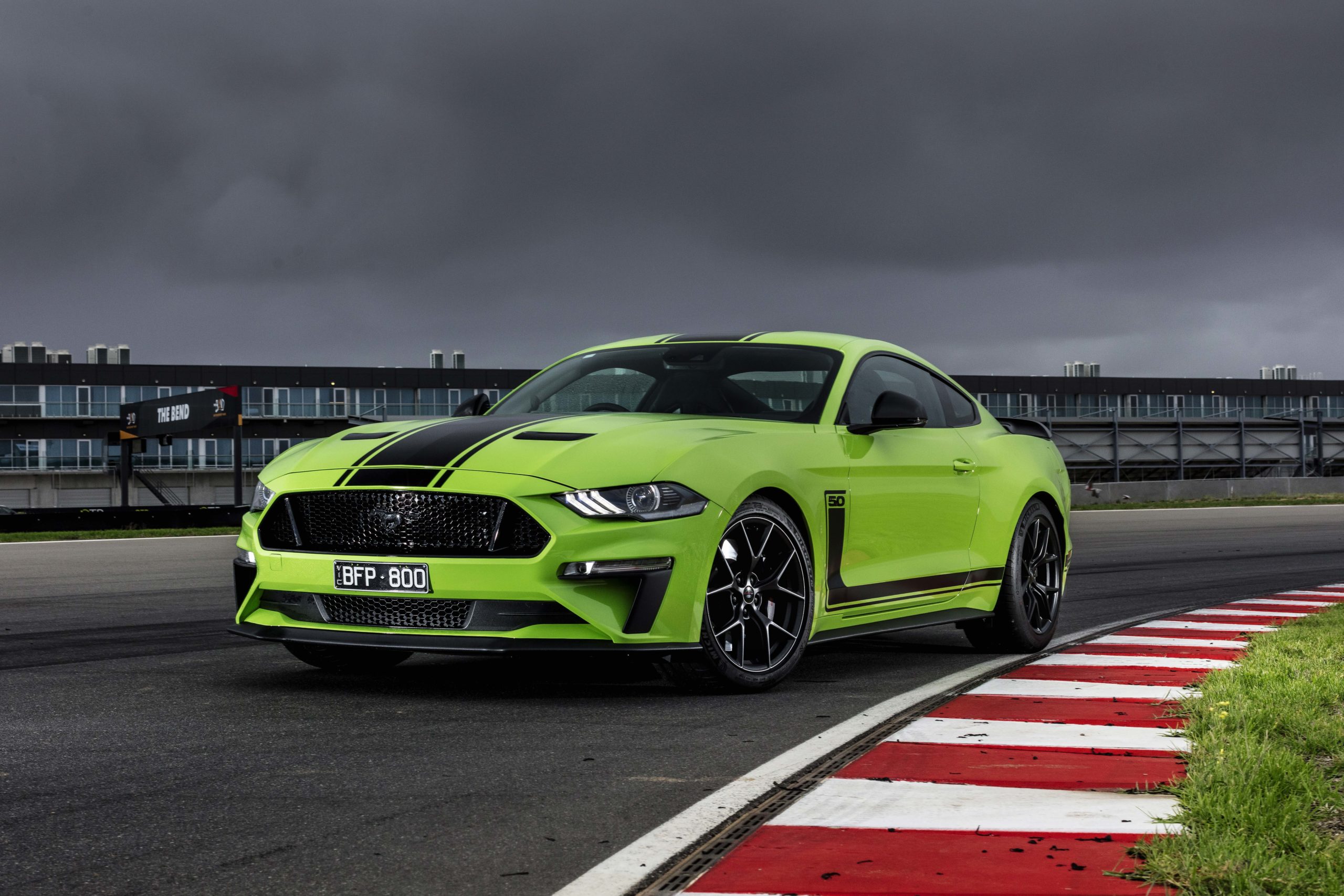 The blue oval is doing its best to build the Ford Performance brand in Australia, and that includes supporting the Mustang’s entry into the Supercars Championship. Ford Australia boss Kaye Hart and Ford Performance personnel (both local and American) have been regular visitors to local tracks to watch Scott McLaughlin and his fellow Mustang drivers race.

Ford Performance in the US and Australia was also heavily involved in the development of the Mustang Supercar, which may look different from the road car, but the team was determined to try and retain some of the key DNA that makes it such an icon. 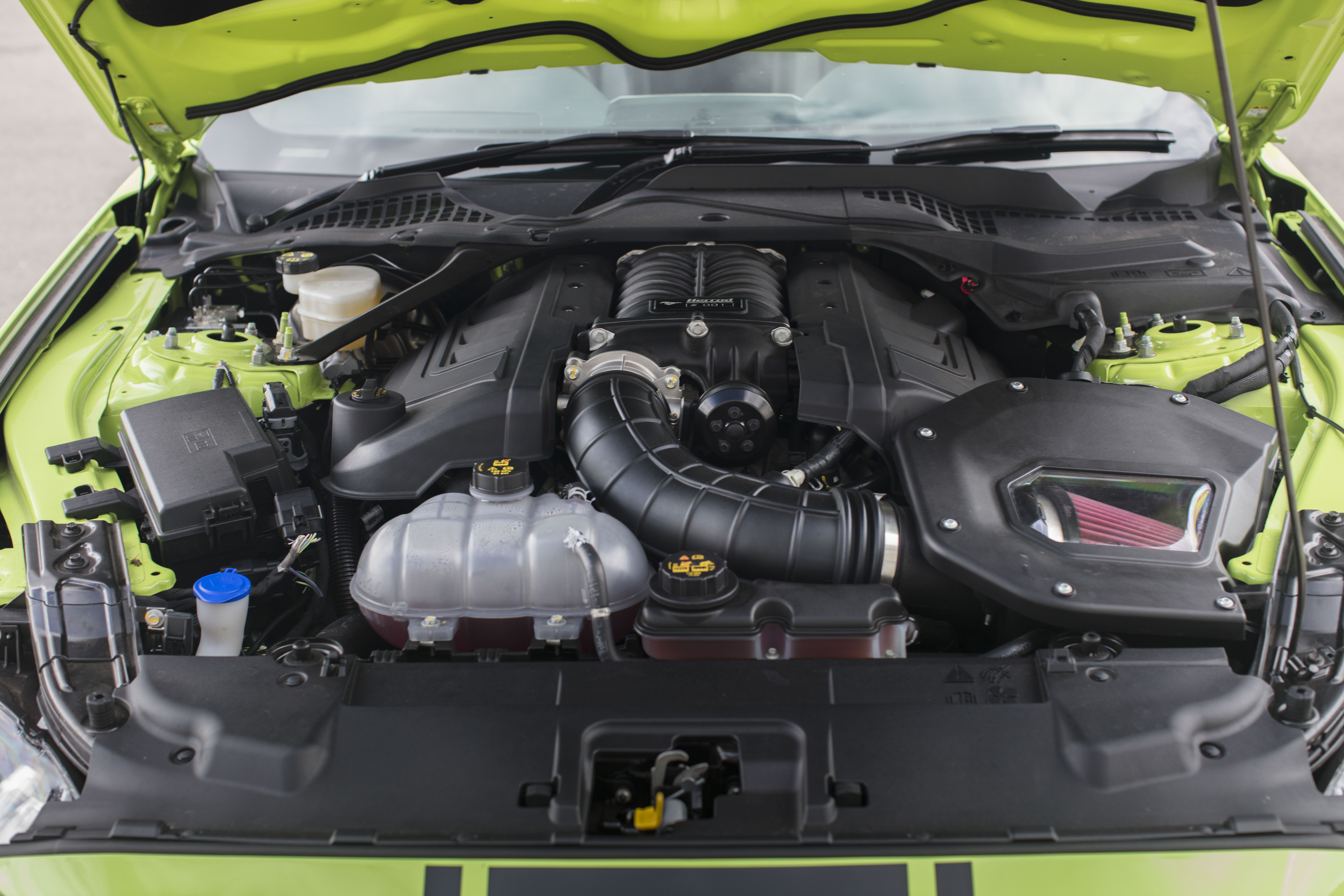 The supercharged V8 has input from Ford Performance, Roush and Herrod.

Herrod has been bolting on superchargers to the Mustang even since it arrived down under in 2015, but for the R-Spec he’s really pushed the boat out. The 5.0-litre V8 from the GT gets an Eaton supercharger with a water-to-air intercooler added. The engine calibration was done by NASCAR team and long-time Ford tuners, Roush, in the US and verified to meet Australian Design Rules (ADR) by the Australian Ford Performance team.

It also gets a Herrod Performance-developed exhaust to help it breathe better and sound suitably aggressive. However, it features an Active Exhaust setting, so it can switch between Quiet, Normal, Sport and Race Track modes depending on the situation you find yourself in.

The engine is paired to a six-speed manual transmission, with the 10-speed automatic not yet compatible with the supercharger engine.

The net result of all these changes is a far more potent powertrain, but exactly how potent Ford Australia can’t say because it hasn’t been officially verified yet. What they can say is now much power the Roush supercharger kit produces in the USA – 522kW of power and 830Nm of torque.

It felt every kilowatt and Newton Metre when we sampled the R-Spec at The Bend Motorsport Park in South Australia earlier this week. The supercharger provides a smooth and linear surge of pulling power right across the rev range. Down the front straight the R-Spec easily passes 200km/h before you have to bit the brakes for turn one. Ford claims the car hit more than 280km/h down Conrod Straight when they demonstrated it at Bathurst last year, and what I experienced at The Bend I have no trouble believing it.

The gearbox is well suited to the package, as nice as the 10-speed auto is it simply doesn’t suit the focused nature of the R-Spec. The action is very mechanical, with a short throw of the lever – which is topped with a Ford Performance cue ball-style black sphere. And having so much torque means even if you leave the car in a taller gear that is ideal, it simply pull you out and launch towards the next one. 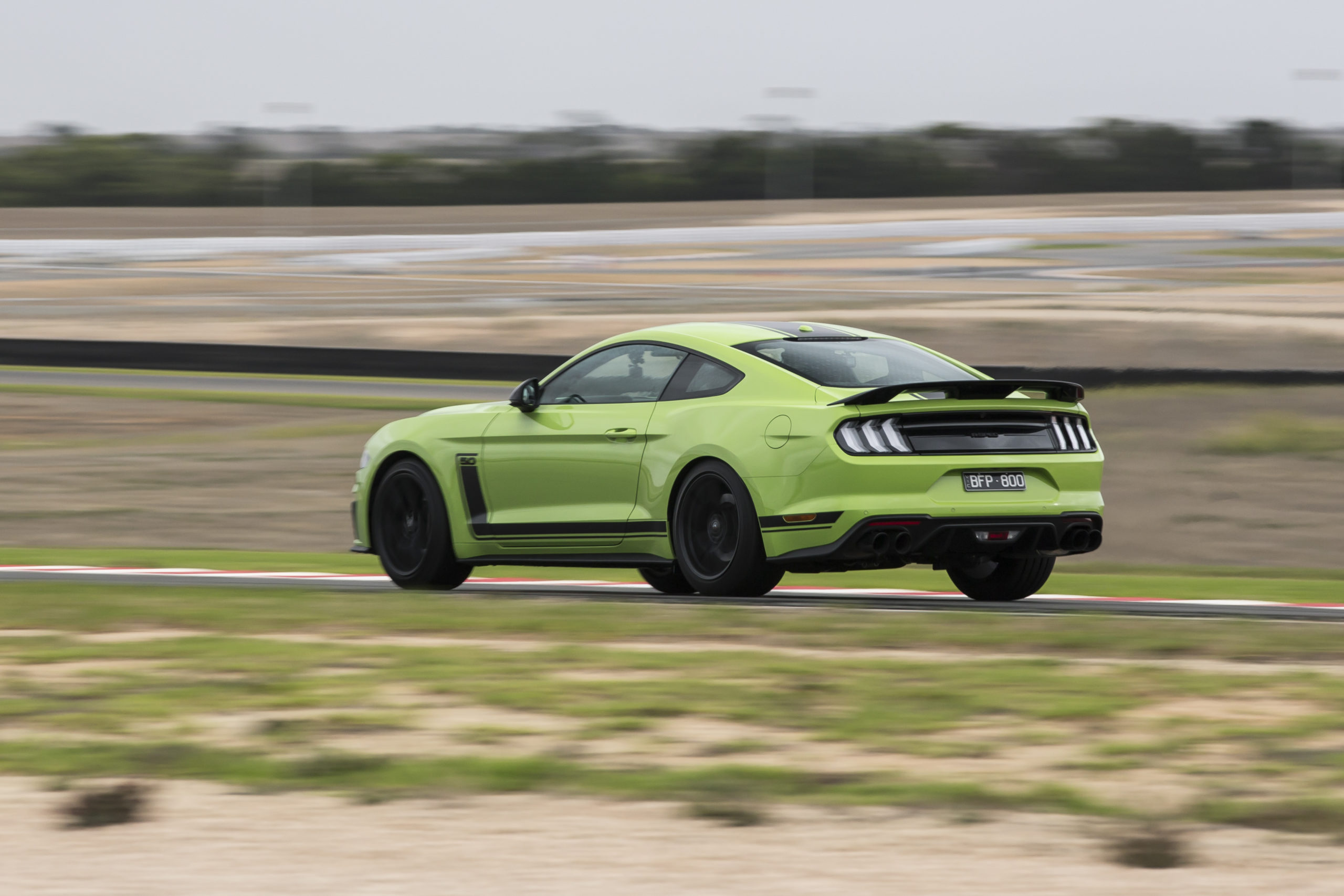 The Ford Mustang R-Spec on track at The Bend.

Adding more grunt alone wouldn’t have been enough for the R-Spec, for Herrod has also given it a major handling upgrade too.

Then there’s the new tyre and wheel package. While it may miss out on the Australian-made Carbon Revolution carbon fibre rims fitted to the Shelby GT500, the R-Spec does get black 19-inch Ford Performance alloys. These are wider than the GT’s wheels too, measuring 9-inches across at the front, and 10-inches wide at the rear. They’re wrapped in Michelin Pilot Sport 4S tyres, some of the stickiest rubber on the market today.

It’s a clear step above what you get with the Mustang GT, the R-Spec feels sharper and more responsive when you throw it at corners. The brakes bit hard (although we only did two-lap runs so we can’t vouch for their longevity) and the Michelin’s provided loads of grip when you turn in. The steering is nicely weighted, direct and responsive too, so it gives you the ability to place the car with precision and confidence. It still feels nose-heavy but that’s always going to be the case with a big V8 under the bonnet, but make no mistake – the R-Spec is no blunt muscle car, it’s got some poise about it.

The Bend provided the ideal venue to put the R-Spec through its paces. The long straight gives the engine a chance to stretch its legs, but the fast, flowing layout used by the Supercars allows it to show off all the handling upgrades.

While it isn’t designed to be a hardcore track car, it certainly needs a racetrack to experience its full potential. However, while we didn’t experience on the road, Herrod and the Ford Performance team assures us that making it comfortable and enjoyable on the road was a priority. 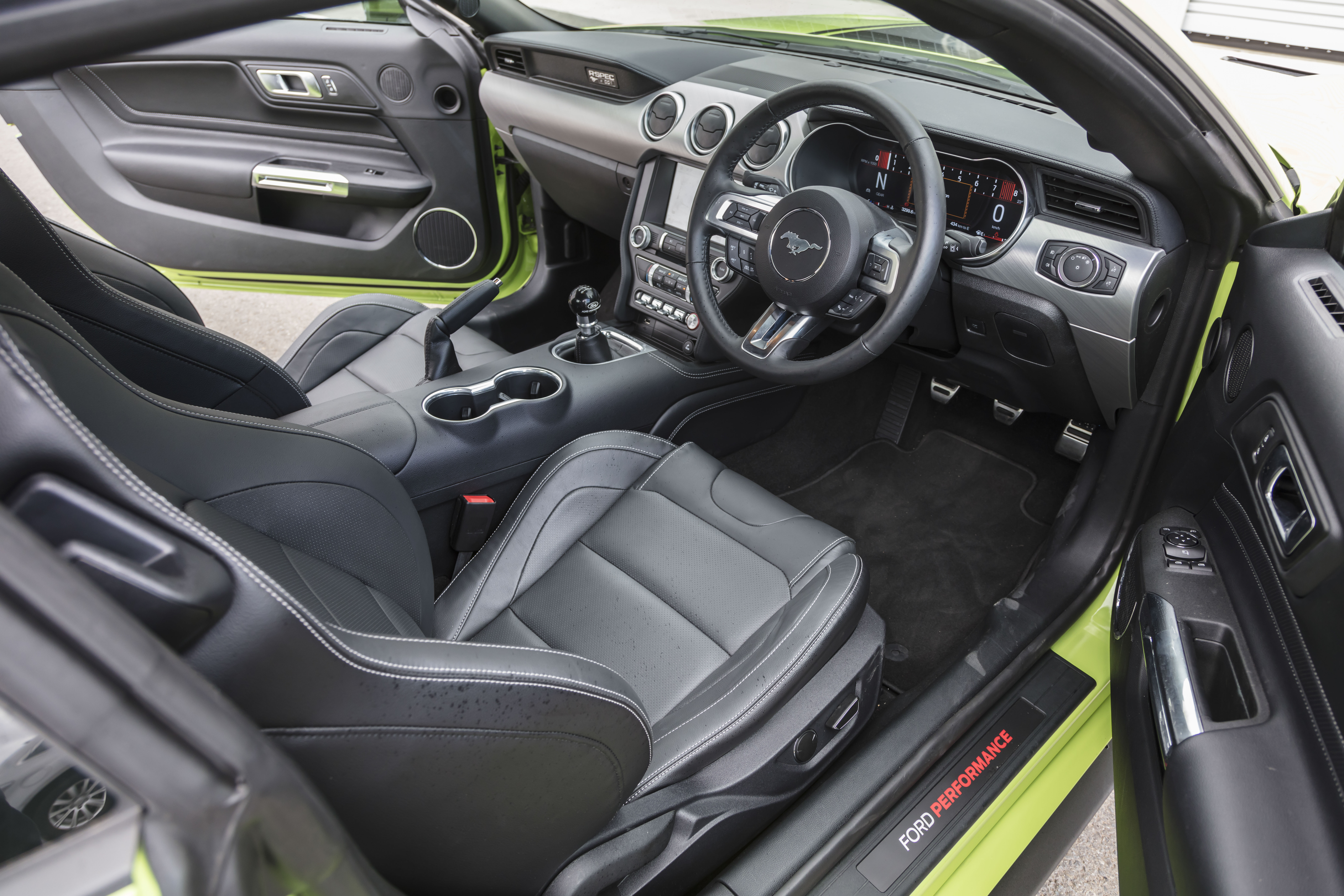 The cabin is very similar to the Mustang GT.

There isn’t much change inside, with most of the changes focused on making it go faster and handle better. Fortunately it still has the digital instrument panel (that adjusts through various layouts) and the comfy Recaro seats that came with the 2018 model year update.

Unfortunately, though, the same criticisms apply with parts of the interior looking and feeling a bit cheap for a $60k car, let alone one now costing nearly six-figures. The switchgear, for example, feels very cheap more like silver-painted disposable cutlery than a proper chrome switch.

However, there are some nice touches worth highlighting, like the ‘R-Spec’ puddle light, that Herrod had to get specially made from the supplier in the US. It’s those minor details that really impress and allow you to overlook the flaws.

Apparently so, because despite a $99,980 (plus on-road costs) asking price all 500 examples of the R-Spec have been snapped up – before any production examples had even been built. Certainly the performance it offers up, combined with the fact this initial batch will become collector’s items, helps to justify the price premium.

The other good news story about the R-Spec is that it’s locally built. All the cars start life as a regular Mustang GT built in Michigan, but the changes to make it an R-Spec are done on a small production line at the former Broadmeadows factory in Melbourne.

In fact, many of the production line workers Herrod is using former Ford employees, so they are experts at building blue oval machines and it’s nice to know that the money you spent is staying in the country.

The cool part about that is it means the R-Spec isn’t technically a Ford after its been down the local production line. Instead the compliance plate calls it a Herrod Performance Mustang. It’s great to Aussie know-how and hard work rewarded.

In a heartbeat. Rob Herrod and the team at Ford Australia have done an excellent job on the Mustang R-Spec, producing a well-rounded muscle car that ticks all the boxes. And the fact that it’s an Australian take on such an American automotive icon makes it just that bit more special; and makes me glad we miss out on the Shelby Mustang options… but just a little bit. 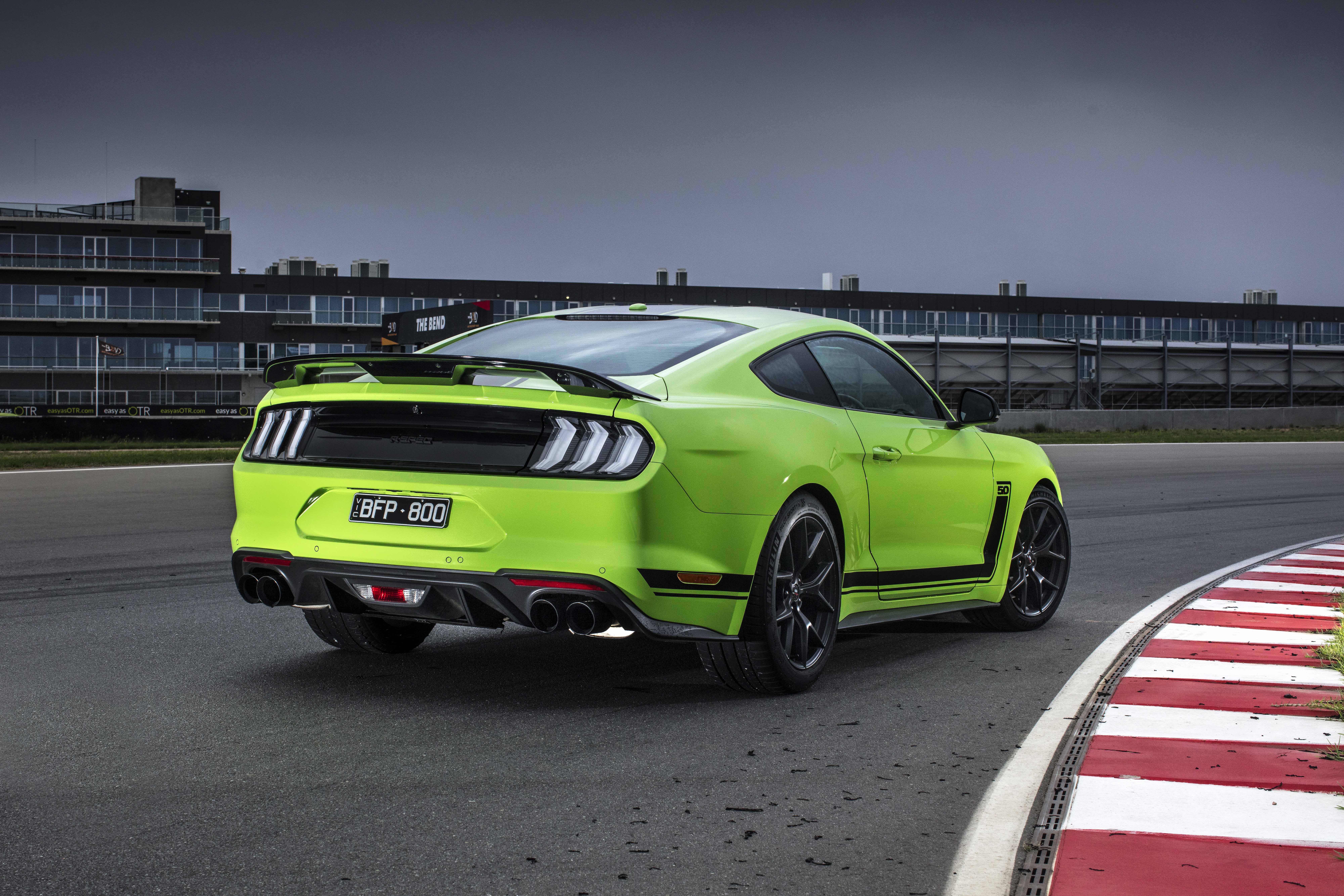