Ford has a rich history of hot hatches and fast small cars, dating back to the days of the Cortina and Escort. In recent years the Focus has been the… well… focus, of Ford Performance’s attention.

With a new-generation Focus launching in 2019 it was only a matter of time before the ST arrived to crown the range. And with Ford’s European branch (which is responsible for developing the ST and RS models) confirming the unfortunate demise of the Focus RS due to ever-tightening emissions restrictions, the Focus ST is now the king of the blue oval’s hot hatch line-up.

Ford and motorsport go hand-in-hand, the company has been involved in racing from its earliest days. While this latest Focus ST hasn’t hit the track yet Ford Performance has plenty of racing experience in recent years, specifically around its ‘EcoBoost’ turbocharged engines. The Ford GT racing program was designed around showcasing EcoBoost as the future performance technology for the brand, demonstrating that a downsized, turbocharged engine could replace the V8 of previous years.

Ford also has plenty of experience in rally and rallycross with its Focus and Fiesta models, demonstrating both are agile and engaging machines on the world stage.

While the Focus RS may be gone, its engine lives on in the new ST. The previous generation ST was powered by a 2.0-litre four-cylinder turbo, but this new model gets the 2.3-litre unit from the RS.

The bigger engine has naturally led to a performance boost, with the new ST now producing 206kW of power and 420Nm of torque, compared to 184kW/360Nm from the old 2.0-litre. However, it has been detuned compared to the old RS, which made 257kW and 440Nm (470Nm on overboost). But that’s probably for the best, because unlike the all-wheel drive RS, the Focus ST remains front-wheel drive and trying to get more than 250kW to the road via two-wheels would be bordering on ugly. But more on how they managed 206kW in a moment…

Even with the power turned down, the extra grunt compared to the old ST is both noticeable and appreciated. This new ST feels punchier and more urgent than before, with the power and torque spread broadly across the rev range so it pulls strongly and consistently.

The new ST also uses the same six-speed manual gearbox as the old RS too, to delight hot hatch purists. However, the more significant new addition is the introduction of a seven-speed automatic transmission.

This is a traditional torque-converter type auto, rather than a dual-clutch version favoured by rivals. While it makes for easier, more relaxed commuting in the ST, with the auto smoothly shifting itself, one major disappointment is the new ‘box doesn’t have a ‘Sport’ setting that allows for faster shifts and holding gears when you want to drive more dynamically. In fact, it has a tendency to hunt for taller gears in the name of fuel efficiency, even when you switch the drive mode into Sport to unleash the engine’s full potential.

Instead, if you want to hold gears and generally have the gearbox more in line with the engine then you need to take control manually and use the steering wheel-mounted paddles. While it solves the problem, it seems like an oversight from Ford not to have a more dynamic gearbox setting in automatic mode like all of its rivals.

Ford Performance has given the standard Focus a major upgrade to ensure it meets ST status. For starters there’s a 10mm ride height reduction, a 15 per cent faster steering ratio (including a unique steering rack and knuckle) and adaptive dampers.

There’s also a new electronically-controlled, mechanical limited slip differential (eLSD) that has been installed to help tame all the extra grunt via the front wheels.

The adaptive shocks – of Continuously Controlled Damping (CCD) as Ford prefers – are able to stiffen or soften depending on which of the four driving modes you’re using. While the ride is naturally on the firmer side, given this is a hot hatch, it never feels crashy or uncomfortable. Combined with the impressive Michelin Pilot Sport 4S tyres, the new Focus ST feels dynamically sharp.

The faster steering feels nice when you turn into a corner, the sticky rubber grips the road and the suspension keeps the chassis taut. Ford Performance has earned a reputation for excellence with its recent models (particularly the Fiesta ST and Focus RS) and this latest Focus ST lives up to that.

The brakes are solid too, with new 330mm front rotors and 302mm discs at the rear supported by a new electronic brake booster developed for the new ST. They provide good bite and plenty of stopping power.

The biggest criticism of the way the ST drives is an extension of the auto transmission problem – a lack of adjustment. While there are four drive modes – Normal, Sport, Slippery and Track – there’s no custom mode that is becoming increasingly common among its rivals.

Volkswagen, for example, has ‘Individual’ and Hyundai has ‘N Custom’ mode, in the drive mode settings, which allow you to alter the various individual elements – engine, suspension, exhaust, etc – to suit your taste or the conditions. For example, during our time in the Volkswagen Golf R we chose to have the powertrain in its most dynamic setting but left the suspension in comfort in order to better soak up the bumps and imperfections on Australia’s patchy roads. 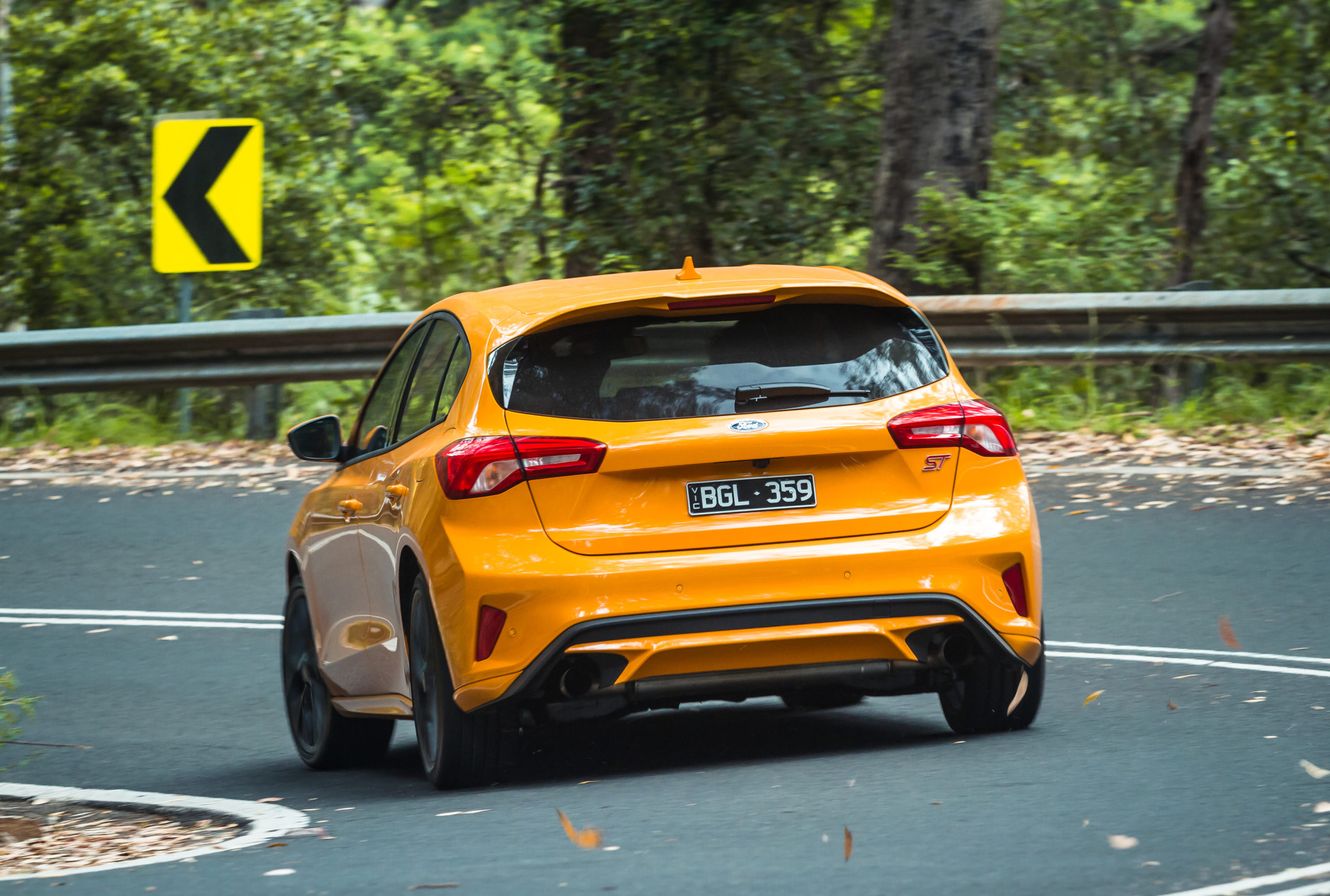 Officially Ford says they did it because they wanted to create distinct modes that driver’s can choose by hitting one button (which still doesn’t explain the lack of a sport mode for the auto ‘box). Regardless, it’s a frustrating miss from Ford Performance given all the other work it has done to make such an exciting hot hatch.

We tested both the manual and auto extensively on the road and enjoyed the time, both simply commuting and giving it some stick on twisty roads. But unfortunately we didn’t get a chance to sample either variant on a racetrack and given the extra performance and the well sorted chassis it feels like it would excel on a circuit.

We’ll try and find out…

It’s a typical hot hatch, with loads of sporty touches to lift up the otherwise standard hatchback cabin. Fortunately, the new Focus was a good starting point with its well laid-out cabin complete with easy-to-use SYNC3 infotainment system.

All of the important elements are done well. The steering wheel is wrapped in partially-perforated leather and is thick-rimmed so it feels solid in your hands. The sports seats are from Recaro and offer good support; but importantly are wider and more accommodating than the previous ST, which was built for skinnier folk.

Ford Australia is offering both the manual and automatic for the same price – $44,690 plus on-road costs. That’s a big leap up from the old (manual-only) model however, which originally retailed for $38,990 – a nearly $6000 increase.

While there’s a lot more performance for the asking price, that does push the Focus ST from one of the most affordable hot hatches into the upper end of the market. The Hyundai i30 N is priced from $41,400 (but is manual-only), the Subaru WRX starts at $40,490 while the Volkswagen Golf GTI is $47,190 with an automatic transmission.

It will be interesting to see what impact the price rise coupled with the addition of an automatic gearbox will have on sales. Typically the Focus ST has flown under the radar, but according to Ford’s own research, when a hot hatch has an auto option that can account for up to 75 per cent of sales – so there’s room for significant growth. I’d certainly have it on my short-list of hot hatches – it’s faster and more polished than before and the introduction of an automatic should make it more appealing.

Personally, I prefer the engagement of the manual ‘box but won’t be surprised if the more convenient auto becomes more popular. But with the updated version of the more exciting Hyundai i30 N coming in 2021 with its own dual-clutch auto, I’d be tempted to wait until then to compare.

If you can’t wait, the Focus ST will no doubt provide you with the thrills and performance we’ve come to expect from the blue oval’s hot hatches.