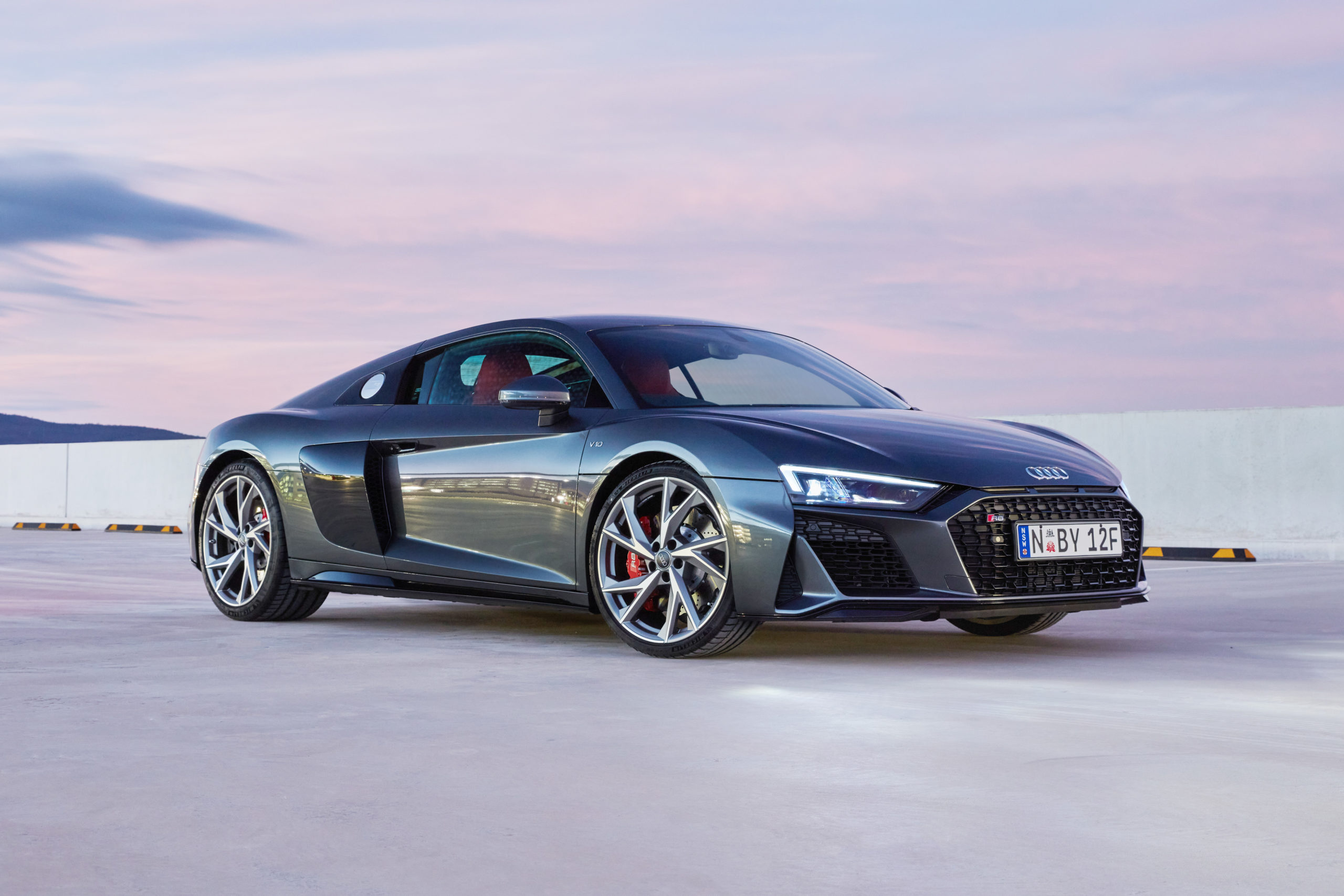 The supercar you can drive every day.

That’s a title most commonly associated with the Porsche 911, but Audi got sick of its German friends taking all the limelight and introduced its own two-door sports car back in 2006. The second generation launched in 2015 and the mid-cycle update for that version has just arrived in Australia.

We’re driving the new permanent addition to the R8 range – a rear-wheel drive model. The company synonymous with ‘quattro’ all-wheel drive experiment with only sending the power to the back wheels with the limited-run RWS (or Rear-Wheel Series) and obviously it proved a popular choice.

But it still has all the other attributes that has made the R8 such a great addition to the four-ringed range – a naturally-aspirated V10 engine, supercar looks and easy-going nature.

READ MORE: Check out our review of the Porsche 911 Carrera S Cabriolet

Few modern road cars have more. The Audi R8 LMS has been a staple of GT3 racing for the better part of the last decade and the crossover between the race and road cars is surprisingly significant.

In an era where most of the “technology transfer” between the racetrack and the road is marketing spin, Audi has genuinely developed both versions of the R8 together. Remarkably the company claims the two machines share up approximately 50 per cent of parts. 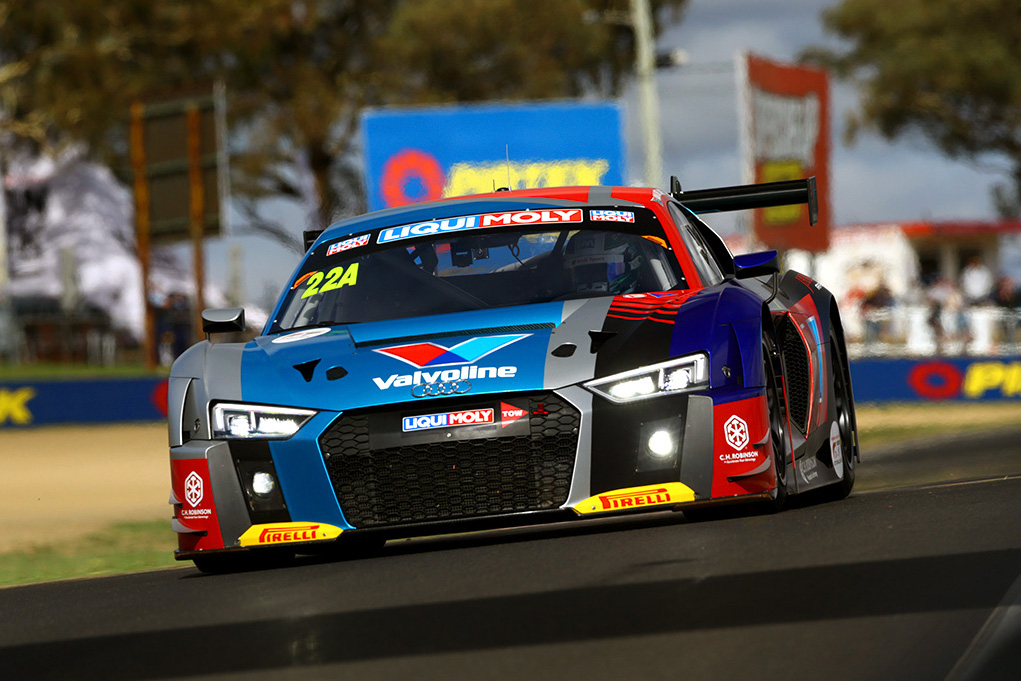 The Audi R8 LMS has been hugely successful in GT3 racing

But it stretches further than that, with Audi Sport involved from the earliest stages of the car’s development. For example, the cabin of this second-gen R8 is bigger than the first, not only to make it more comfortable as a road car, but also so the LMS can fit a roll-cage.

Even the addition of the RWD model helps bring it a step closer to its racing sibling.

Sadly this fantastic 5.2-litre V10 is likely to be one of the last great naturally-aspirated, large-capacity engines. Fuel economy and emissions standards are likely to see Audi forced to downsize or (as is rumoured) make the next evolution of the R8 all-electric. So we must enjoy screaming, free-revving engines like this as long as we can.

It’s not just because it’s the last of its kind that makes it great though. This really is a special motor, in part because it’s been developed with the input of both Audi and Lamborghini.

That’s because the R8 doesn’t just share its mechanical DNA with the GT3 race car, it’s also a twin-under-the-skin with the Lamborghini Huracan. The two are developed together to save both brand’s money but the net result for Audi, is a car with some genuine Italian supercar flair. 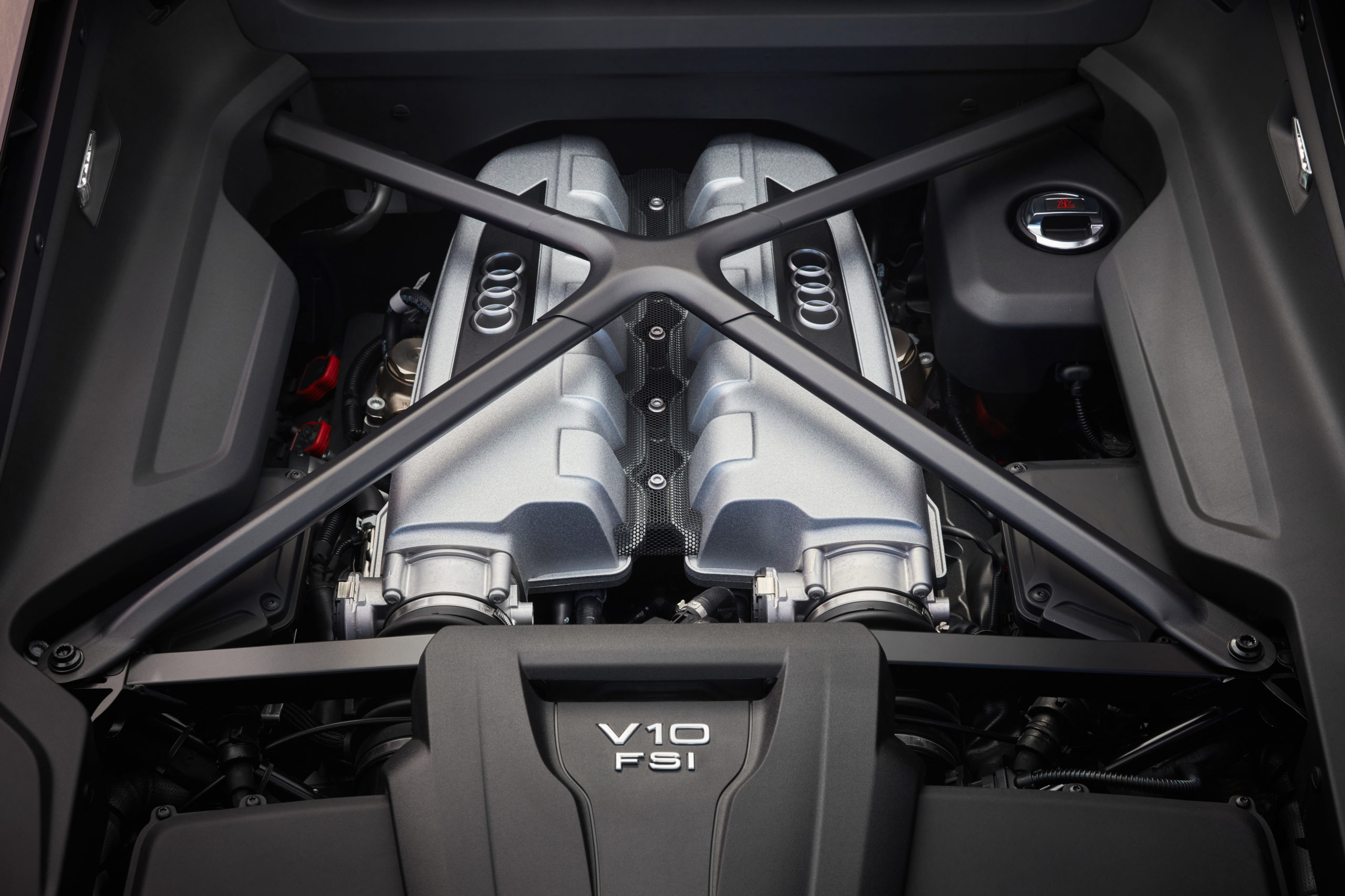 One of the most notable features is the way the engine screams, there’s a throaty roar as the revs build before it turns into a racy scream as it gets to the redline. It is, without question, one of the best sounding cars on sale today.

And the performance matches the soundtrack, with 397kW and 540Nm. It possesses punch down low, a noticeable shove in the mid-range and the ability to keep building speed seemingly as long as you keep your right foot buried.

Naturally such a big, powerful engine will be thirsty and the R8 drinks premium unleaded at a rate of 12-litres per 100km; which is on par with some of its rivals. However, it’s helped by Audi utilising its cylinder-on-demand technology, which can shut down up to five-cylinders when they aren’t needed (under light loads around town, for example) to save petrol. But you won’t notice either, it’s a seamless shift between running on half or all cylinders.

Audi is famous for popularising all-wheel drive but its decision to introduce a rear-wheel drive R8 is inspired. There’s nothing wrong with an all-wheel drive supercar, as such, but in my book there’s simply something more appealing about one that only sends its power to the rear wheels.

The R8 RWD handles exactly how you’d expect a sports car to handle. It’s incredibly responsive, sits flat in the corners and feels planted and progressive when pushed. The ride is taut but creates a feeling of control. Find yourself a challenging piece of road and the R8 will make light work of it. The steering is exceptional, an area Audi has progressed significantly in recent years, so the R8 turns in with a light touch, but complete precision too.

The V10 will fire you out of the corners too, and despite having to transmit all that power through the rear wheels, the rubber measures 305/30 so it rarely struggles for traction.

But the really impressive aspect of the R8 is that not only does it do the exciting bits well, it does the mundane with equal aplomb. It’s as easy to drive in traffic as an Audi A3 hatchback. Few sports cars pull off this double act quite as well as the R8 manages, many of its peers feel so restricted at low speeds they can become a chore to drive around town.

One of the best bits of the R8? It doesn’t scrap its nose on driveways and dips. Our week was spent worrying about scratching underneath the nose – a common sports car problem – but the dreaded sound of bodywork on bitumen never came. It’s genuinely a supercar built with going to the shops in mind. 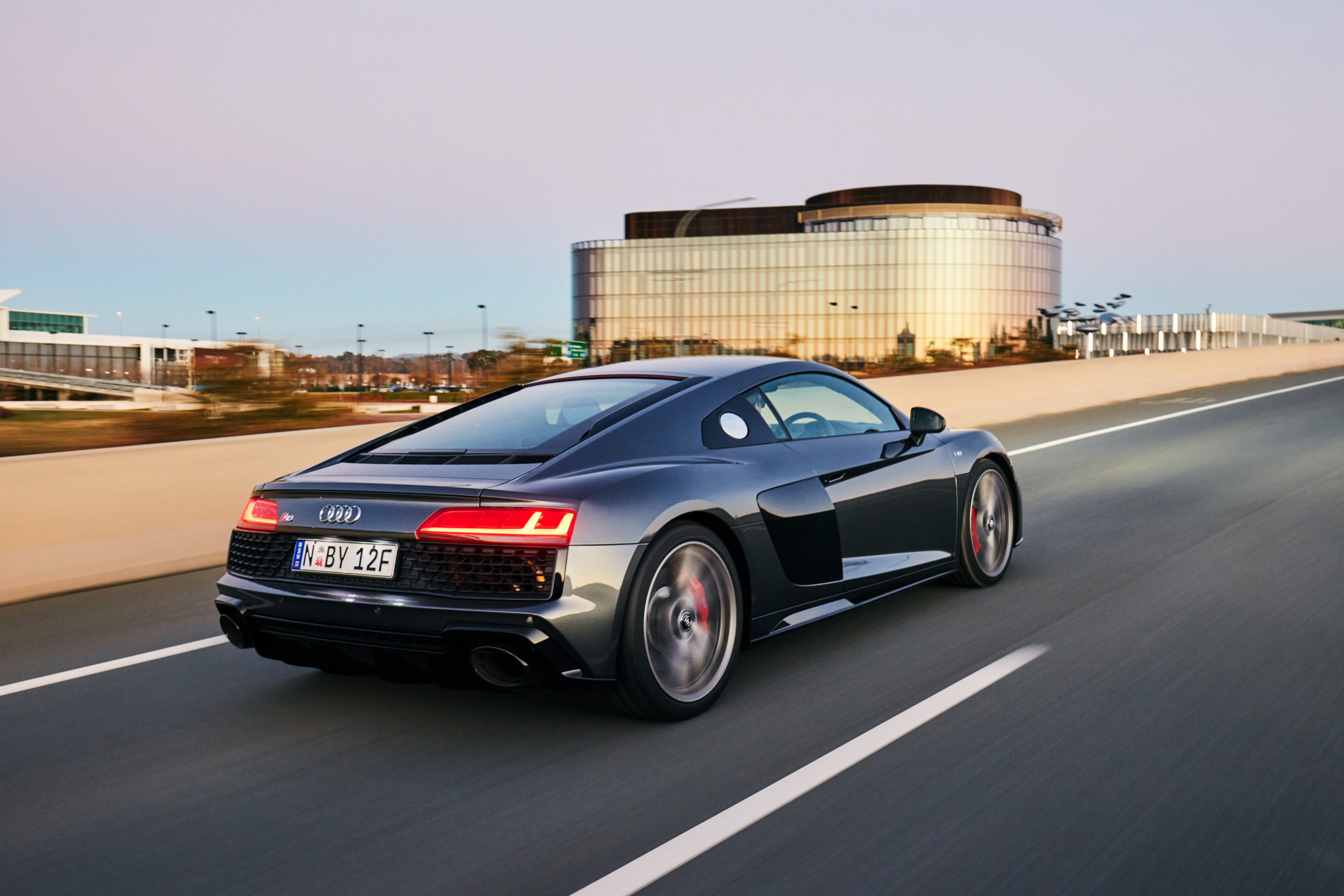 It may be good around town but this is a car built to be unleashed. The obvious answer is Germany’s Nurburgring, a place the R8 no doubt spent countless laps being tuned during its development.

The V10 would power you around the Eifel Mountains, while the chassis keeps you in control across the variety of bends, before the engine could stretch its legs on the long straight run to the finish line.

I’ve said it before and I’ll say it again – Audi does consistently the best job of cabin design of any car maker. The R8 is no expectation, perfectly blending form and function to create an environment that is unique, sporty and liveable.

The interior is designed around the driver, there’s no central infotainment screen so all functionality runs through the 12-inch digital dashboard. That may be slightly inconvenient if you want your passenger to change the radio station, but makes life easier for the driver – and that’s who the R8 is focused on. 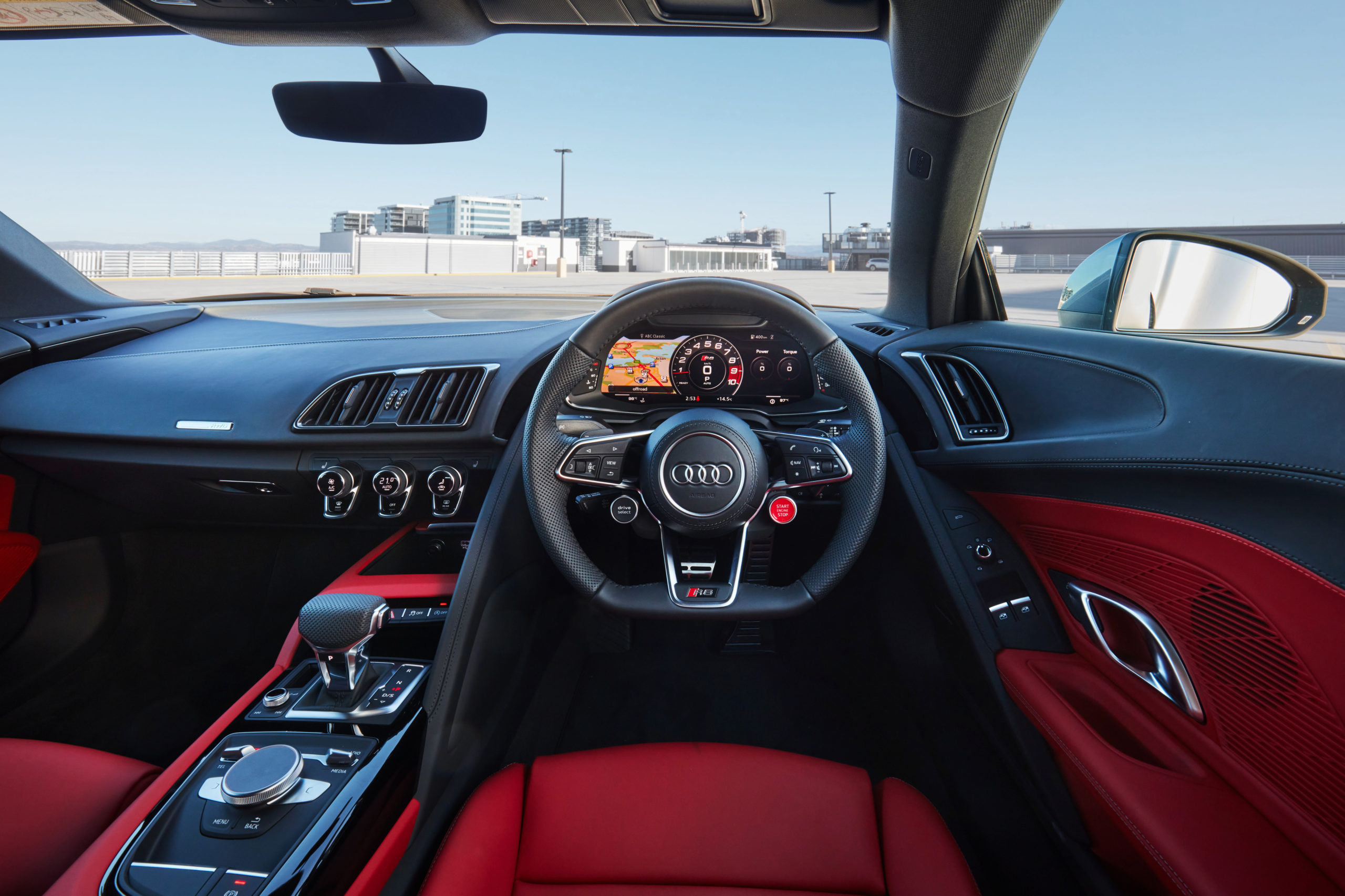 The thick-rimmed steering wheel feels solid in your hands and has a race car-like red starter button, which is a fun touch, as well as another button to scroll through the ‘Drive Select’ modes.

The little touches make the cabin feel truly premium, like the way the air-conditioning controls are built into tiny screens on each air vent dial.

There’s surprisingly good storage too, with a wireless smartphone charging pad located within a covered storage box underneath the centre of the cabin.

But arguably its biggest rival is the Porsche 911, which starts at $236,300 for the entry-level Carrera and $274,600 for the more powerful Carrera S, so Audi will have to fight hard for every R8 sale. It’s a hard question to answer. I’d argue that the R8 V10 RWD is the second-best daily supercar, offering mind-blowing performance and liveability in a sleek and stylish package. But that’s exactly what the Porsche 911 does. But coming a close second to arguably the world’s most iconic sports car is nothing to be disappointed by. Audi has produced a genuine gem in the R8.