This is the start of a new era for Audi – its first pure electric vehicle that will lead a new wave of battery powered models.

That’s why it’s simply called the e-tron, a name that will apply to all (or at least, most) EV models the four-ring brand will release in the next decade. It’s the same naming concept the brand used when it debuted four-wheel drive as a performance concept. The original car was called, ur-Quattro, and now the quattro name is applied to any four-wheel drive model Audi offers even today.

Audi is hoping the e-tron name becomes just as synonymous as we move into an era of electrification.

Audi is a big believer in using motorsport as a test bed for future road car technology. We’ve already seen it with its Le Mans program, both with the petrol-powered V8 and then its various diesel models.

That’s why Audi was one of the earliest supporters of Formula E, both at an arm’s length and then as a fully-fledged factory team, which has allowed them to learn key lessons around electric motors and batteries as well as thermal and energy management. 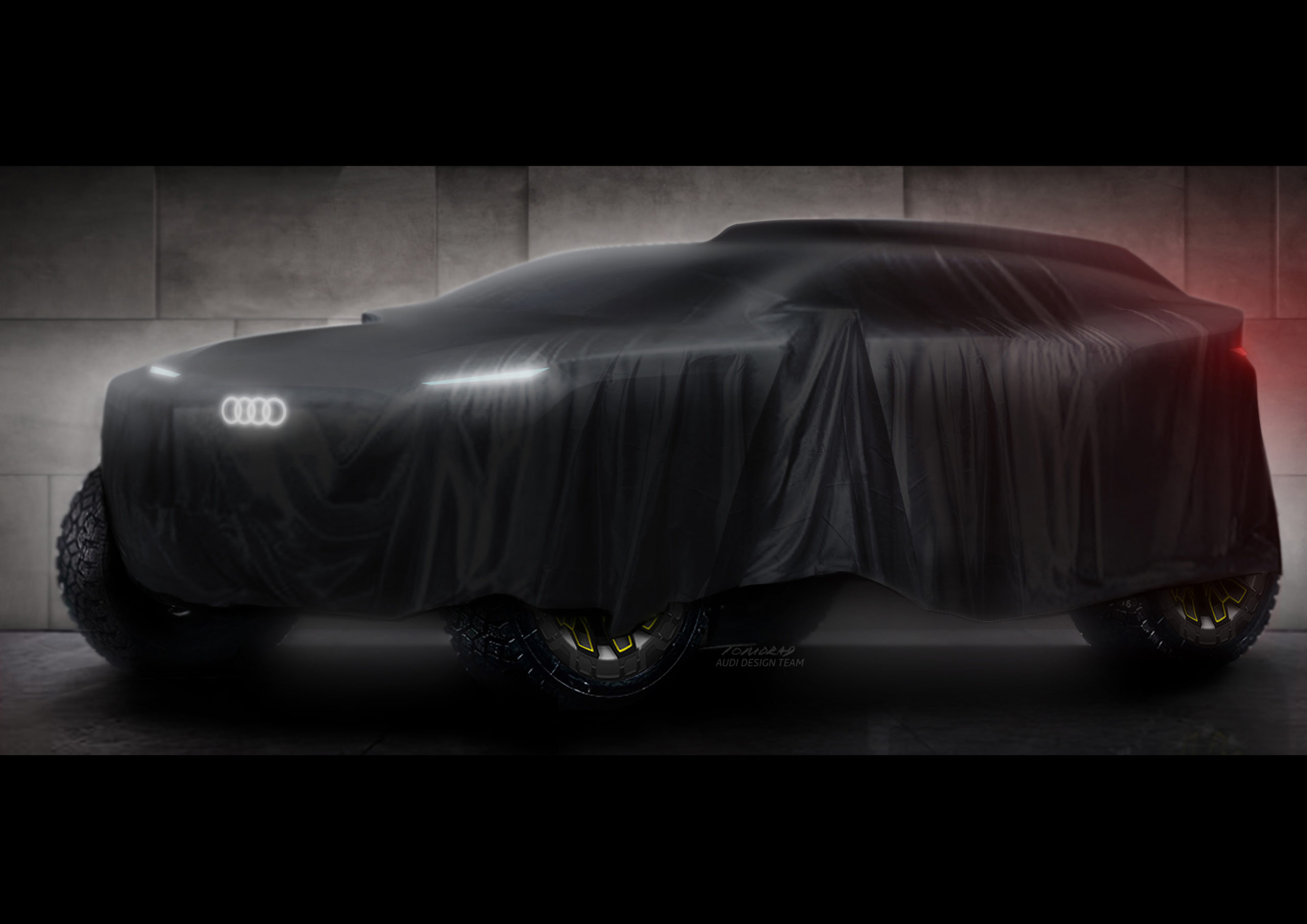 Audi will showcase its electric technology in the Dakar Rally

But it seems the restrictive nature of Formula E’s rules aren’t good enough for the brand now, because it will put EV technology to the ultimate test with an “innovative prototype” that will tackle the Dakar Rally in 2022. It will feature a new “high-voltage battery” and a “highly efficient energy converter” to tackle the huge stages through the desert. Future e-tron models will no doubt benefit from lessons learnt in the Dakar.

It’s not so much what’s under the bonnet with EVs, because the electric motors tend to be packaged more tightly. In the case of the e-tron Sportback that means a pair of motors, one on each axle that provide 300kW of power and 664Nm of torque. It’s supported by a liquid-cooled lithium-ion 95kWh battery that Audi claims provides a range of more than 400km. Those outputs are impressive and endow the e-tron with the kind of sporty performance we’ve come to expect from EVs. That’s in large part thanks to the instant torque because there’s no engine to spin up, making EVs feel more urgent than the most responsive petrol and diesel cars.

There’s a catch, however, and that’s the battery consists of 36 modules and that adds significant weight to the e-tron, so it tips the scales at 2480kg (without the driver). So, while it’s responsive it isn’t as quick off the mark as some of its rivals, taking 5.7 seconds to run 0-100km/h; which is still a quick time for a five-seat SUV.

One of the best parts about EVs is how smooth and effortless they feel on the road. When you put your foot down there’s no noise or fuss, speed just builds instantly. Audi has done a particularly good job making the e-tron feel refined, which adds to the luxury feeling and doesn’t detract from its sportiness. 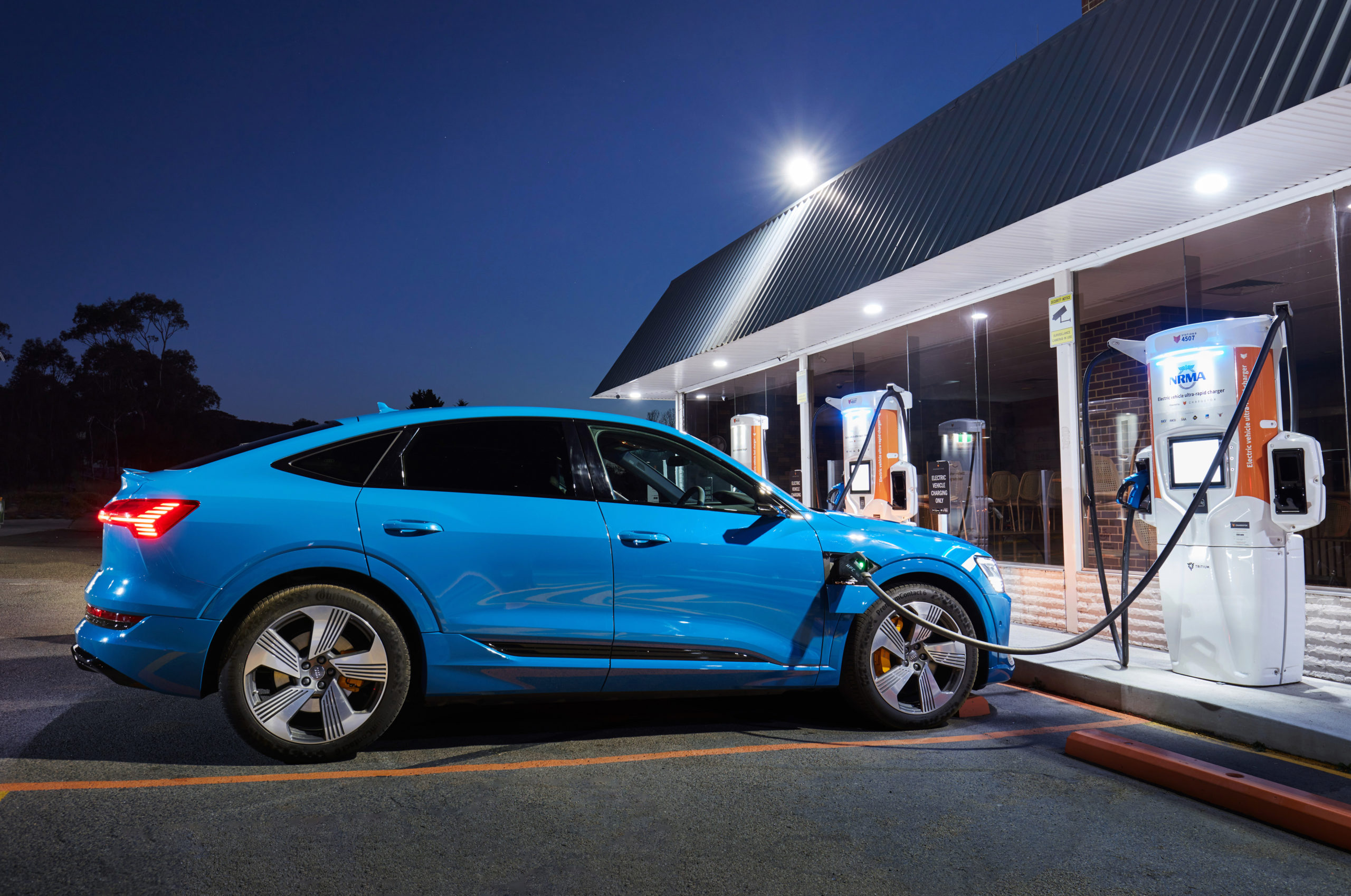 Audi’s claimed range of more than 400km does feel optimistic (or at least will require optimum conditions) because during a week behind the wheel we found the battery depleted at a steady pace; especially in anything other than its most efficient drive mode.

That’s because in Comfort and Sport drive modes there’s very little regenerative braking, which is one of the biggest differences in the way the e-tron drives compared to its EV rivals. Most EVs have strong regen braking, so lifting your foot off the accelerator is enough to start dramatically slowing the car. In contrast, the e-tron continues to roll with only mild retardation, which makes it feel more like a conventional car. You can adjust the regen on the move, though, using the steering wheel mounted paddles, so Audi has tried to cover all angles.

The weight of the e-tron Sportback has a huge impact on the way it drives, because Audi has had to work hard to overcome the obvious challenges being so heavy. The good news is they’ve done an admirable job. 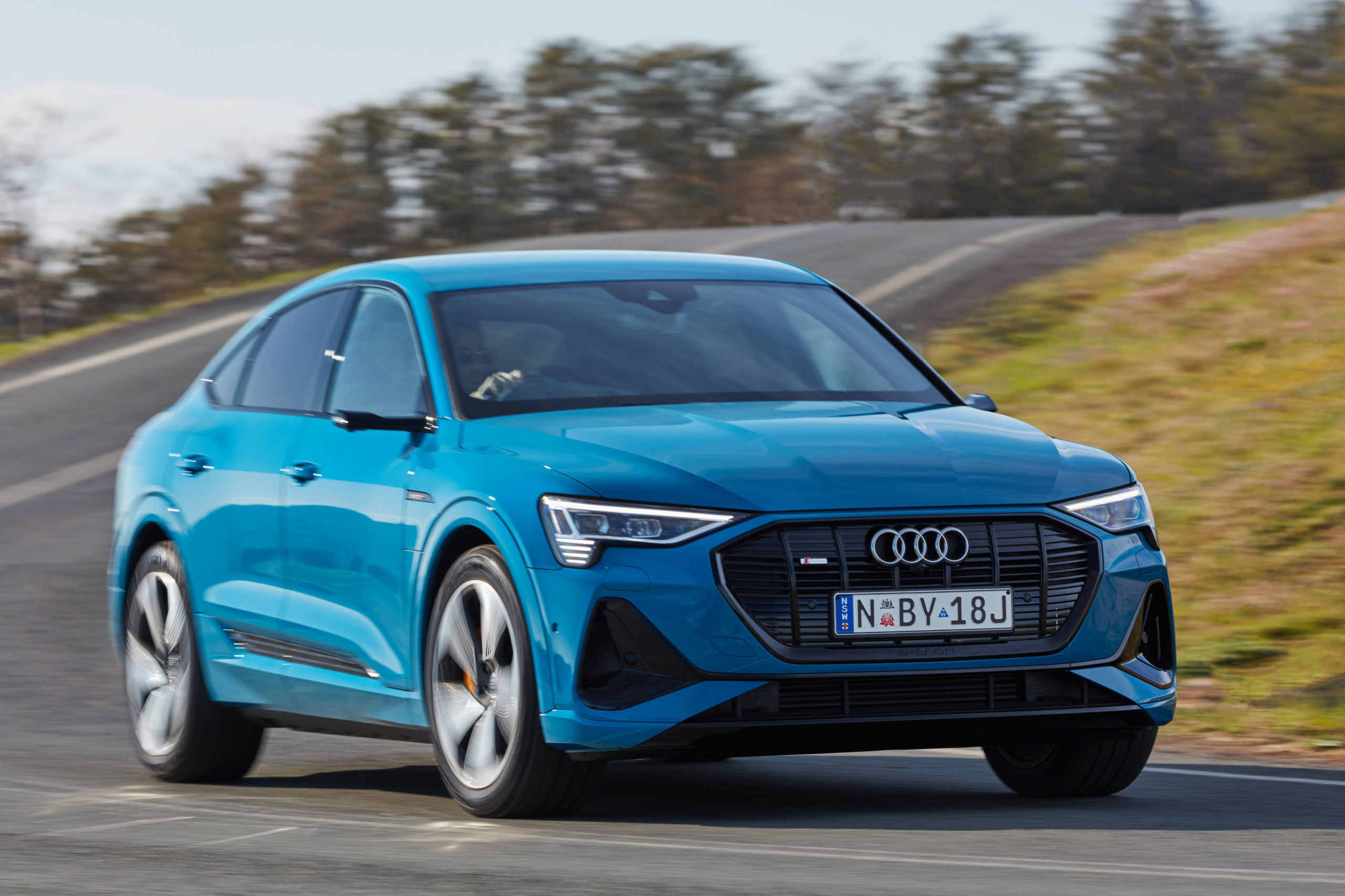 All Australian e-tron models will come fitted with adaptive air suspension, which is good news because it helps manage the weight well. The e-tron Sportback drives with the same level of polish as its similar-sized petrol-powered Audis, such as the Q7 and Q8. The ride is generally comfortable although the 21-inch alloys can jar at times on patchy roads and sharp edges.

The steering is a disappointment, while it steers faithfully when cornering there can be some numbness off-centre when driving straight.

A unique element of the e-tron Sportback is its side mirrors – or lack thereof. The Audi is the first car sold locally to replace its side mirrors with smaller, more aerodynamic cameras. The image from each side is displayed onto a small screen on the top of the door.

While it’s very cool technology, it’s a strange point-of-view (because the screen isn’t inline with the camera) so it feels like it will take some time to get used to. Even after a week behind the wheel it still felt strange and wasn’t entirely comfortable. But if they are more efficient, we should probably get used to them. 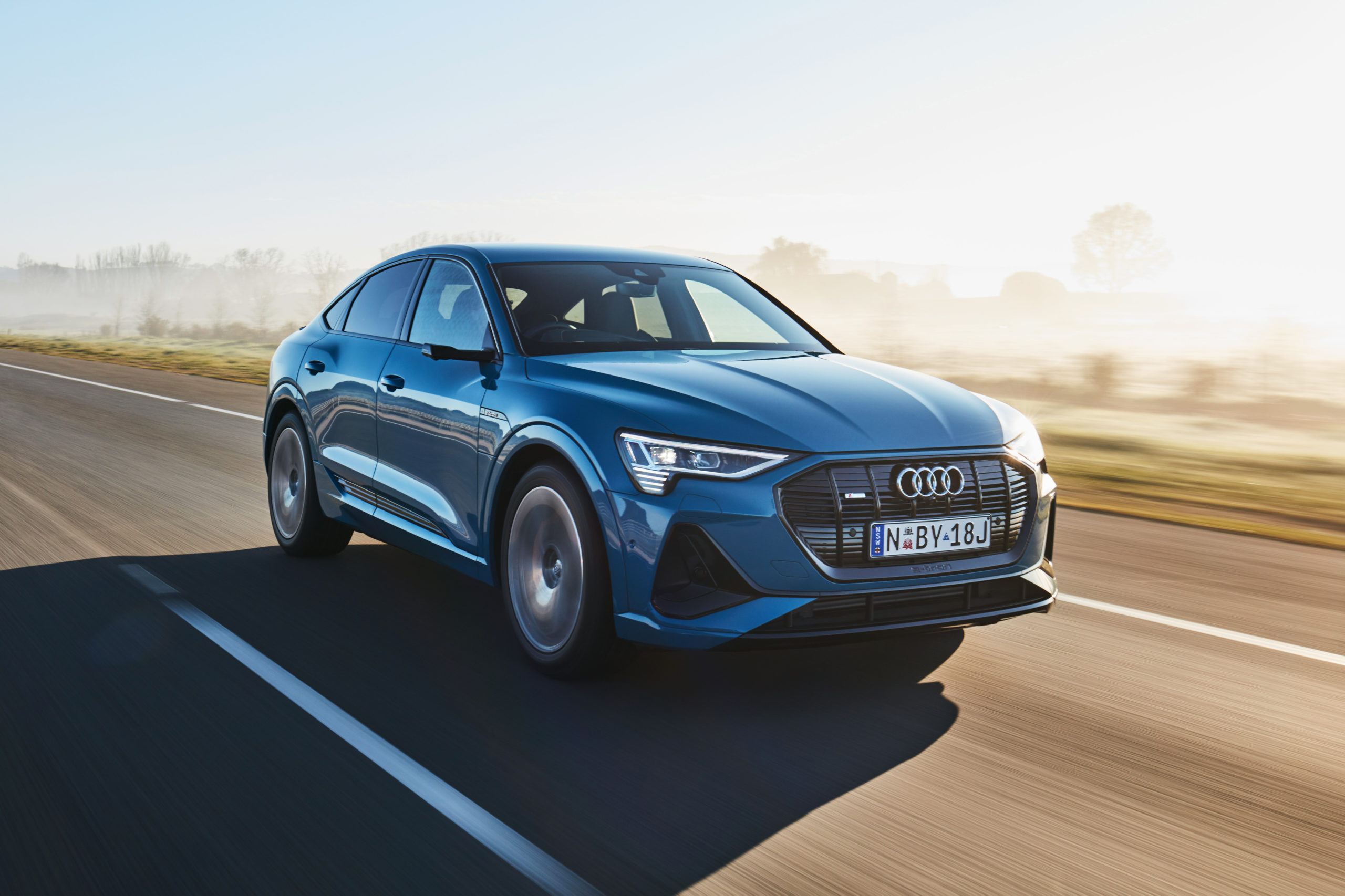 I’d love to take a road trip in the e-tron, because it’s a comfortable SUV that could play the role of a grand tourer well. As Australia’s public EV charging network continues to expand it feels possible to take a long city-to-city trip in an EV with a 400km range.

Audi has taken a different approach to some peers and opted against a unique design theme for its EVs. Instead the e-tron features the same style and technology (save the camera/mirrors) as the rest of the brand’s line-up. 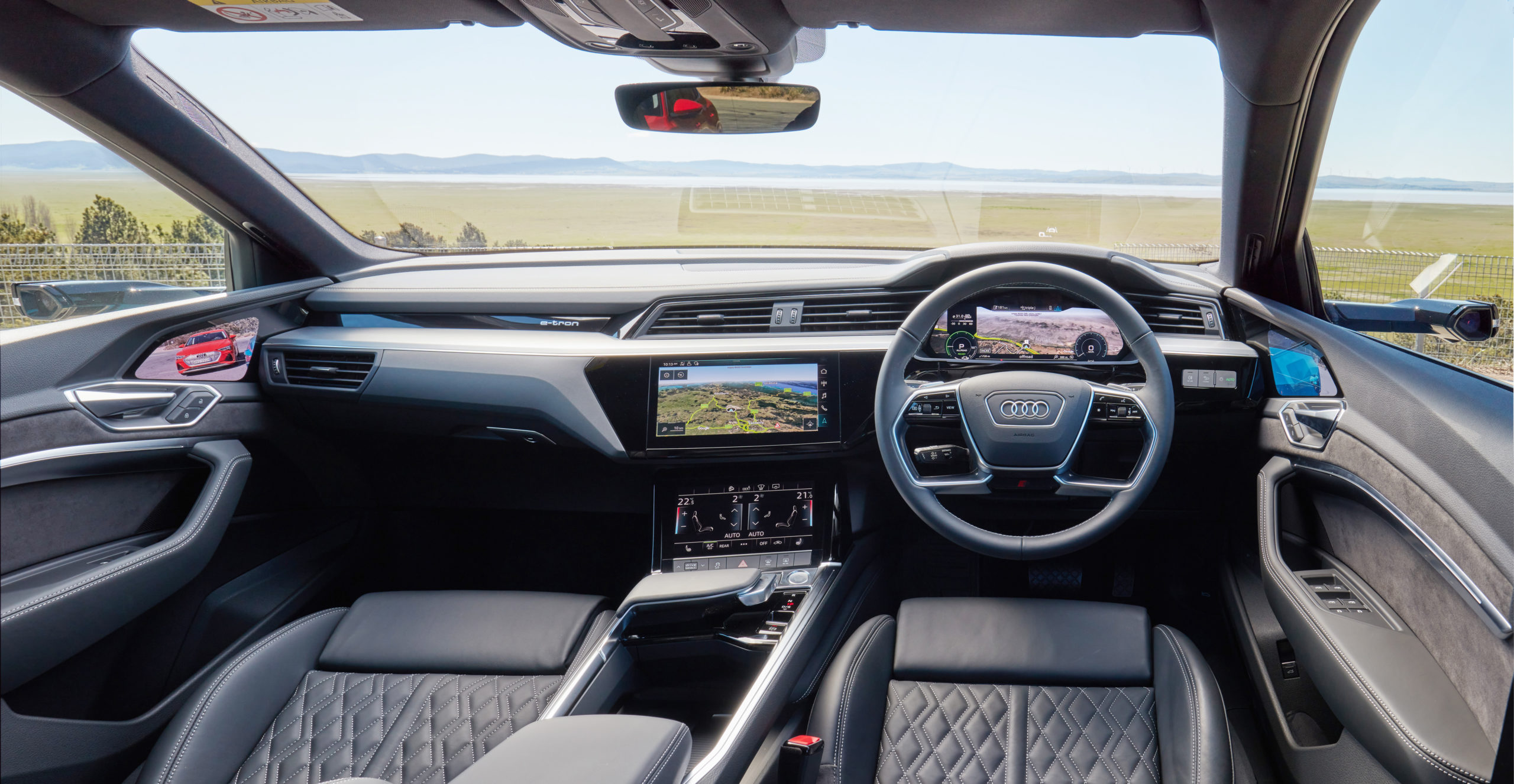 That means a digital instrument panel and a pair of screens in the centre of the dashboard – the upper display is for infotainment and the lower screen handles the climate control.

There are a couple of small but unique touches for the e-tron though. The first is the four-spoke steering wheel, which personally isn’t my cup of tea, and the second is the gear selector. It’s a small level attached to a wide panel that you can comfortably rest your hand on.

Audi has launched the e-tron Sportback (and the standard e-tron SUV) with the choice of two powertrains (50 and 55) as well as the First Edition we’re driving here. It comes with extra equipment, including the unique 21-inch rims, orange e-tron brake calipers, Matrix LED headlights and 705W Bang & Olufsen 3D sound system. That helps justify the asking price of $169,350 (plus on-road costs).

All e-tron will also come with a complimentary Jet Charge home charger and a six-year subscription to the ChargeFox network to further enhance its value argument.
The standard e-tron 50 quattro is priced from $137,100, by comparison the Mercedes-Benz EQC starts at $137,900, the Jaguar I-Pace is priced from $128,248 and the Tesla Model X starts at 160,011. 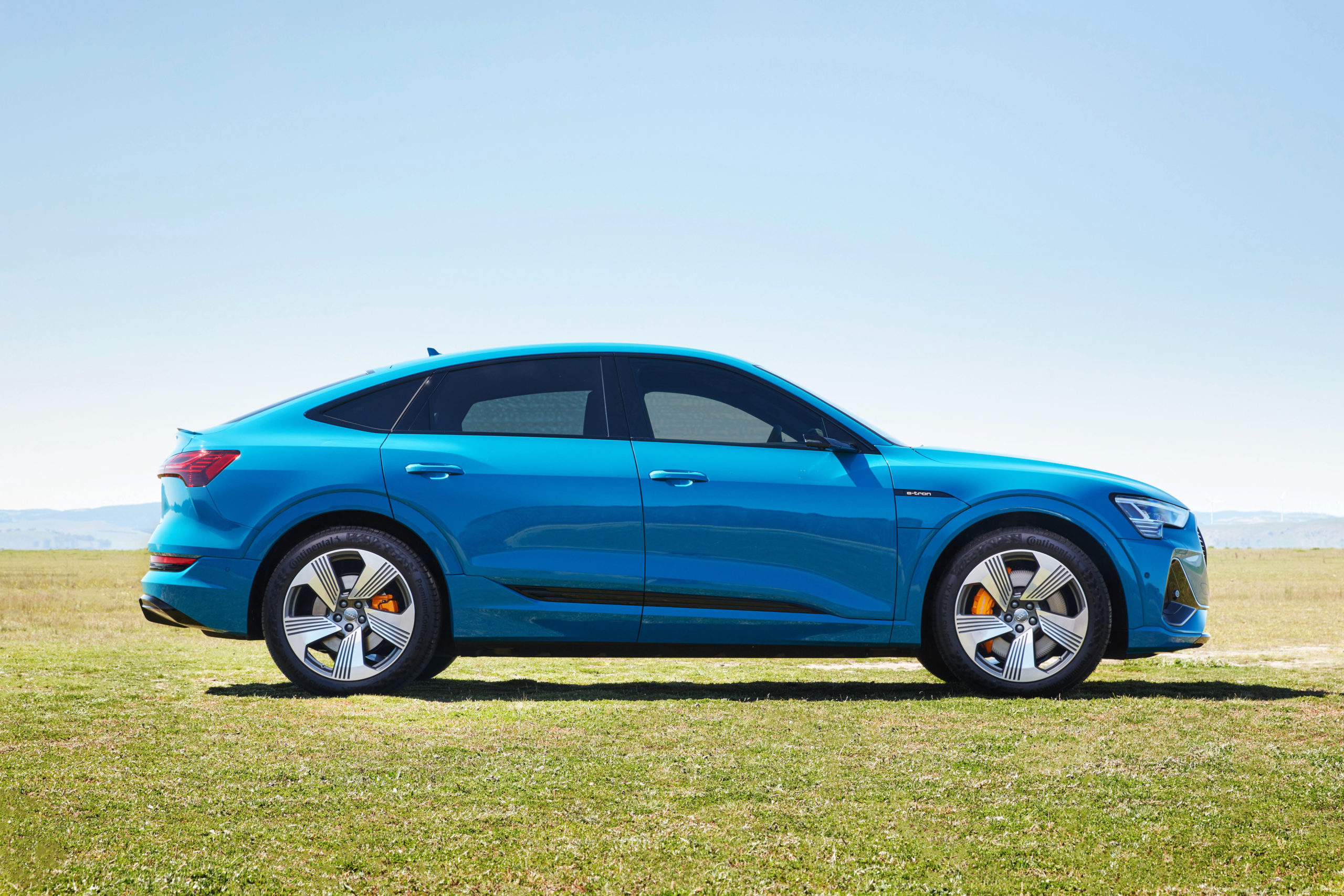 Audi has done an excellent job on the e-tron Sportback. Aside from the quirky mirrors (luckily old-fashioned ones are available) it’s easy to drive and offers genuinely quick performance, all without a drop of fuel. Personally, I prefer the look and extra space of the standard e-tron over the Sportback, but I’d happily make the switch to electric power.