What is it?
Hyundai’s first attempt at a true performance car. The South Korean brand dabbled in sporty cars but underwhelmed with the likes of the Scoupe and Tiburon before the arrival of the i30 N hot hatch in 2018.

It immediately changed the way people thought about the brand, once famous for selling cheapies like the Excel and Accent. The i30 N won awards and impressed both the media and buyers with not only its performance, but also its engaging and playful nature.

Earlier this year the N Performance sub-brand expanded with the addition of the i30 Fastback N. The same powertrain and chassis as the i30 N but in a different body – a unique five-door liftback shape. It means hot hatch performance in a more sophisticated package.

Does it have any racing pedigree?
The i30 N hatch has been dominating TCR series around the world, including the local series that Will Brown dominated. But it’s also claimed the World Touring Car Cup in 2018 and is in the fight for the 2019 title.

The Fastback was recently the basis for Hyundai Australia’s entry into the World Time Attack Challenge. That project served as a test bed for potential performance upgrades for the updated model due in 2021.

Plus, Hyundai Australia also enter an i30 N in Targa Tasmania this year, with rally ace Brendan Reeves finishing amongst more expensive sports cars in his class. What’s under the bonnet?
Hyundai didn’t try to reinvent the wheel with its first hot hatch, sticking with the tried and tested formula of a 2.0-litre turbocharged four-cylinder petrol engine. Globally the company offers two different levels of tune for the i30 N – a standard 184kW of power or a Performance Package with 202kW. But in Australia the brand decided to only offer the more potent version in a boost for local buyers.

The engine is a gem, with 353Nm of torque it has plenty of pulling power across the rev range and the power gives you an extra kick up need the red line. It means the engine keeps pulling hard as long as you keep your right foot buried.

And thanks to a specially tuned exhaust, it has a fantastic raspy soundtrack that features plenty of racecar-style snap, crackle and pop.

The engine is paired to a six-speed manual transmission as standard, which is good news for purists but does limit the i30 N’s audience until the planned eight-speed dual-clutch auto arrives in the next year or two.

For those who love the three-pedal option it’s a great gearbox. It has a short, direct throw and the ratios are nicely spread to let the engine shine.

It also comes with several driving modes that can be adjusted either via a button on the steering wheel on the infotainment system menu. You can switch between Normal, Sport, N and Custom modes, depending on the circumstances, to adjust a variety of settings including the engine, exhaust and launch control settings. How does it handle?
Building a fast hot hatch/liftback was never really the challenge for Hyundai and N Performance when they went about creating the i30 N. A big engine, bigger wheels and tyres and beefed up brakes will make an average small car go faster.

No, the real difficulty for the first-timers was to make it fun and engaging for the driver. Hot hatch buyers want something liveable during the week but with a well-sorted chassis so that weekend’s on their favourite road (or even a trackday) can be enjoyable and challenging.

That’s what the i30 Fastback N delivers in spades. The fundamentals of the car are excellent – well balanced, responsive steering and strong braking. But there’s another layer on top of that.
The eLSD helps drag you out of corners with ease, smoothing out your rough edges without reducing your role as the driver.

Then there’s the role Hyundai Australia’s product development team had in shaping the ride and handling package for the Fastback. The local team spent months tuning the hatchback for our unique road conditions and driving tastes. The result was a softer set-up than the global tune done by teams in Korea and Germany.

Hyundai’s big wigs were so impressed when they drove the hatch here that members of the Australian team were drafted in to help adjust the global tune for the Fastback and the updated hatch, due in 2020.

It means the ride feels well suited to Australia, soaking up bumps in our imperfect roads while still providing the kid of responsiveness you expect from a sporty car.

Where would you most like to drive it?
The i30 Fastback N would make an ideal chariot for a weekend in Tasmania. The Apple Isle has some of the country’s best driving roads, hence why Targa Tasmania is such an iconic event. But the scenery is just as breathtaking and the massive boot of the Fastback would easily accommodate a weekend’s worth of luggage. 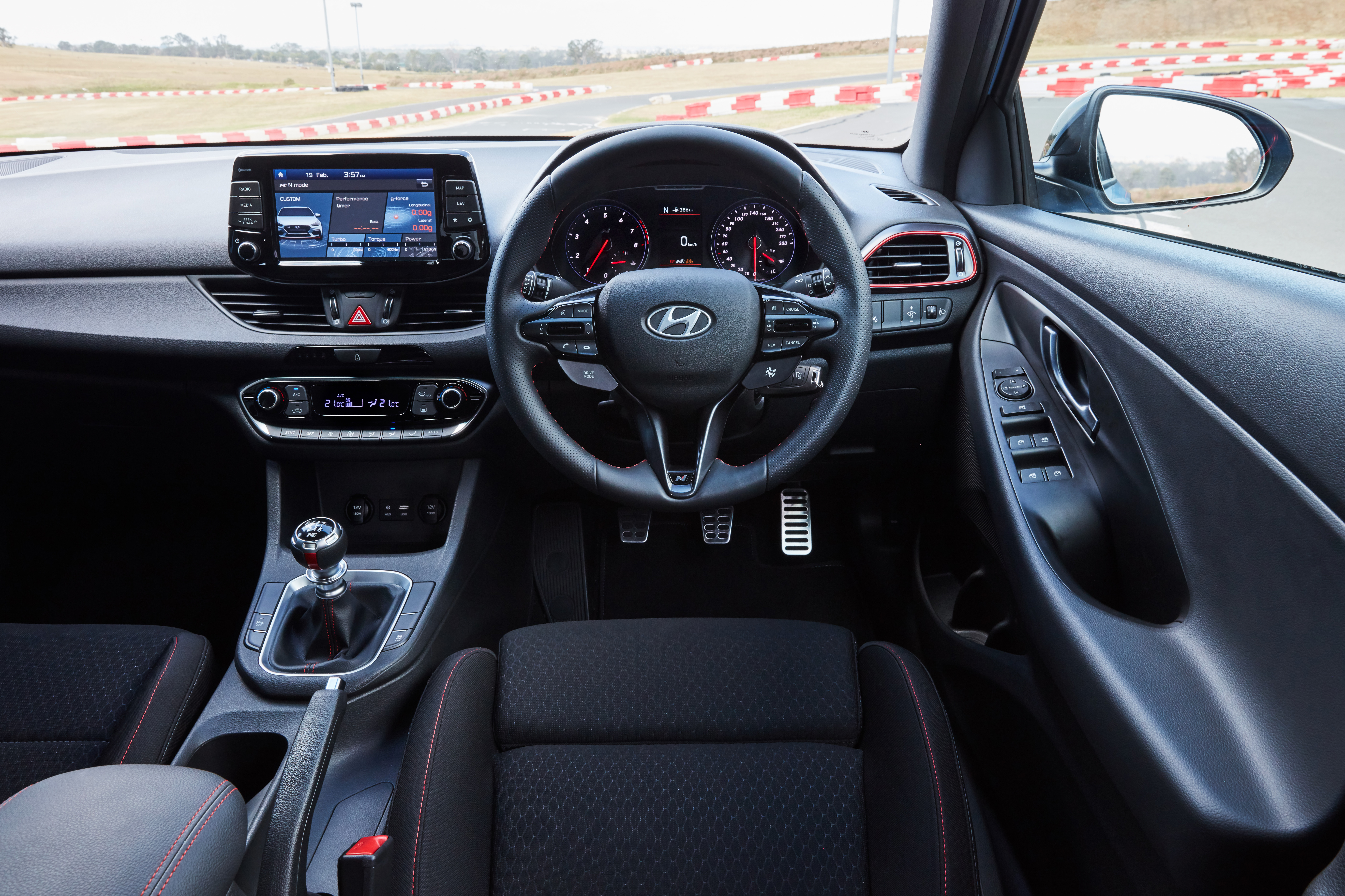 What’s the interior like?
This is the weak point of the i30 Fastback N, with only subtle changes compared to the regular i30. There are sportier seats, some N logos scattered around and a sportier steering wheel complete with ‘N Mode’ button to adjust the various drive modes.

But it feels like it could do with a bit more pizzazz, something like the Volkswagen Golf GTI’s iconic tartan seat trim, or more overtly sporty bucket seats – something to make it feel more special than the stock i30.

Is it good value for money?
Priced from $41,990 (plus on-road costs) the Fastback is $1500 more than the i30 N hatch, unless you’re truly enamoured with the shape of this car it’s hard to argue it’s better value.

However, both versions are excellent buys for those looking for a hot hatch/hot liftback because they offer excellent performance as well as a long list of standard equipment.

When you consider that this is what’s considered the i30 N Performance Pack overseas (which means more power, eLSD and bigger alloys), it represents a tangible saving over key rivals such as the Golf GTI and Ford Focus ST.

Then there’s the warranty, which is not only five-years long but also covers all non-competitive track use. Which means you can do track days and other similar events without having to worry about what happens if something breaks. That’s a massive value add… and incentive to use it like it was intended.

Would I buy one?
Personally, I’m a sucker for the hatchback shape, but I can certainly see the appeal of the Fastback. Either way, I’d be more than happy to have an i30 N in my driveway on a permanent basis. Remarkably for a first time effort, Hyundai reset the hot hatch benchmark with the combination of value, performance and just plain fun you get in the i30 Fastback N.