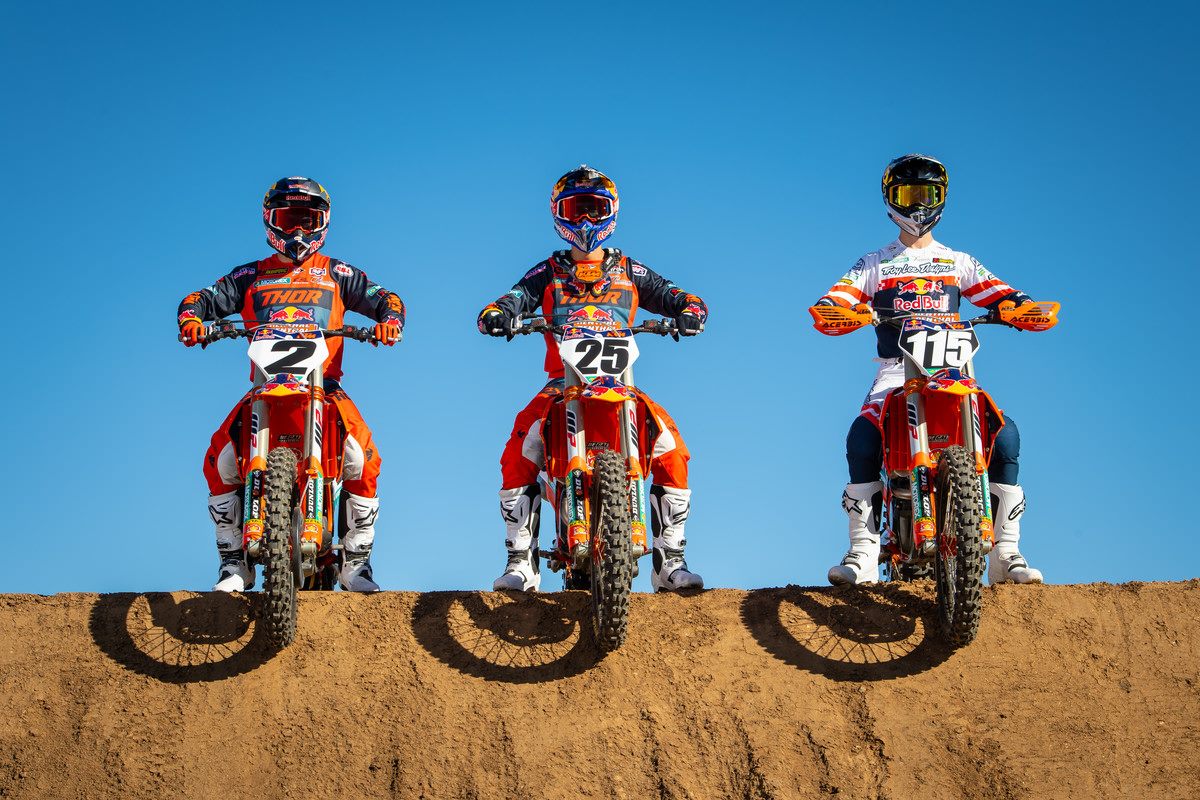 Red Bull KTM Factory Racing’s Marvin Musquin and Cooper Webb have put the final touches on their offseason preparations as they head into the 2021 AMA Supercross Championship with high expectations ahead of Saturday’s season opener in Houston, Texas. Rookie 250 cc rider, Maximus Vohland, will join his elite premier class teammates at Round 1, where he is set to make his professional supercross debut in the 250SX Eastern Regional division.

Just two days away from the first-ever season opener at NRG Stadium, a notable change from the 20-year tradition of Anaheim I season openers in Southern California, the Red Bull KTM Factory Racing Team is focused and ready to battle for a fifth AMA 450 Supercross World Championship in 2021. Despite an overall disruption to the traditional schedule, this year’s championship will boast a full 17-round series from January to May, including 10 rounds of the widely-popular KTM JUNIOR RACING SX program, presented by Wells Fargo, where the next generation of riders will go AMA Supercross racing for the first-time ever aboard the brand’s highly competitive electric minicycle – the KTM SX E-5.

Looking for his second premier class title aboard the KTM 450 SX-F FACTORY EDITION, Cooper Webb carries significant experience and familiarity into his third season with the Red Bull KTM squad. The 2019 450SX Champion narrowly missed the number one spot last season but it wasn’t without a fight as he defended his title all the way to the final round. As the 2020 championship runner-up, Webb welcomes the challenge to reclaim his crown in 2021.

Cooper Webb: “This season will be a lot different than normal – starting in Houston and with the schedule having a format of three races in a week – but I’m excited that we’re able to get back to racing, especially for me after missing a majority of the outdoor series with my back injury. The offseason went great riding and training with the guys down here at The Baker’s Factory. The bike is really good, we didn’t change too much, the chassis is the same and we’ll have some new suspension stuff that is pretty spectacular. I’m looking forward to racing in Houston, it’s always been a track that I really enjoy, the stadium is really nice and the dirt is always pretty dang good. I’m all healthy and 100% healed so I’m just looking forward to getting things started and trying to go after a championship this year.”

Perhaps the rider who is most eager to begin the season is Marvin Musquin, who was sidelined during last year’s supercross series due to a major knee injury. Recovered and stronger than ever, Musquin looks to secure his first title in the premier class as he lines up for his sixth season aboard the KTM 450 SX-F FACTORY EDITION and 13th season with the KTM family.

Marvin Musquin: “For the new year, my goal is to come back to my full potential after missing a whole Supercross season due to injury. I was able to race outdoors, which was great, but now it’s time for Supercross. Right now, I’m pretty happy with where I’m at. I wanted to have a smooth and consistent bootcamp/winter training – which I did – and now we’re only a couple days away from the start of the season. It’s super exciting because we spent quite a bit of time training and now it’s time to go racing. It’s hard to have expectations because there are a lot of good guys and I just want to get out there and execute my best and get back to racing Supercross like I know I can. I’m excited to go to Houston for over a week and race three times there, that will be new for me. It’s good news that we’re going to be racing the whole championship and I’m looking forward to getting started.”

Debuting aboard the #115 KTM 250 SX-F this Saturday, Maximus Vohland is Red Bull KTM Factory Racing’s newest addition but he is no stranger to the KTM brand as a longtime member of the Orange Brigade amateur race team. Now rising to the next career challenge, Vohland is ready to face a talented field of young riders as he enters the 250SX Eastern division.

Maximus Vohland: “I’m really excited coming into my pro debut this Saturday. There’s a lot of hype going on for this first round but I’m trying to just stay focused on myself. I’ve been putting in a lot of work during the off-season and have been feeling really good on the bike these last few weeks. I spent a lot of time testing with the team in Southern California and it’s been a really good learning experience for me to be surrounded by so much knowledge and experience. I’m looking forward to going out there and doing my best, staying injury-free and coming out with some good results.”

Ian Harrison, Team Manager: “We are very confident in the team’s abilities heading into the 2021 Supercross season. We had a really productive off-season with all the riders and we were able to fine tune our 2021 machine, which should really give them a good bike setup. The guys are healthy and strong so we’re looking forward to starting the new year on a high note this weekend in Houston.”

Returning for its 22nd year in 2021, the KTM JUNIOR RACING SX program, presented by Wells Fargo, will once again showcase the talents of young riders who get a once-in-a-lifetime opportunity to race on the very same tracks as their Supercross heroes. The 10-race schedule begins this Saturday, January 16 in conjunction with the opening round in Houston, Texas and concludes alongside the series finale on Saturday, May 1 in Salt Lake City, Utah.

For more information on KTM and its riders, please visit www.ktm.com/us.