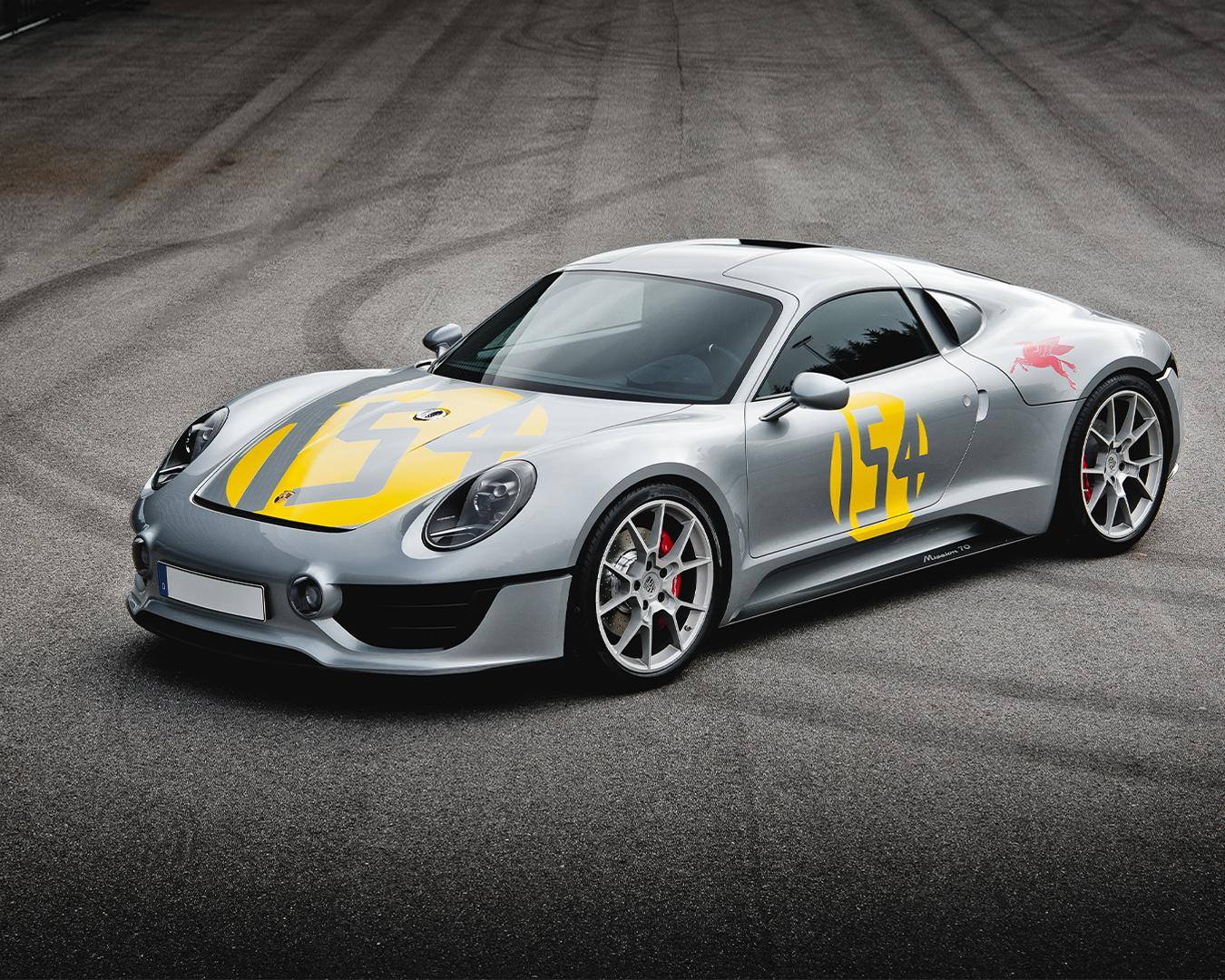 Normally we wouldn’t give a car company three stories from one press release, but the Porsche Unseen isn’t a normal situation.

The company’s decision to show off a decade of previously secret concept cars has been a goldmine for fans of the German brand. From the Le Mans racer to the road (the 919 Street) to the Formula E-based track day special (Vision E) Porsche’s creations have been amazing.

To conclude our series we’re going to be looking at the more interesting and downright wild creations that have sprung from the minds of the company’s designers when they’re given free reign.
Michael Mauer, Vice President Style Porsche, explained that the process behind the creation of these cars always begins with a sketch, moves to a 3D model and then to either a full-size scale model or an actual prototype. All these steps are needed to fully understand how the designs translate from paper to the real world.

“The virtual world is the first step, but you especially have to experience the unusual models in reality in order to understand whether a car has small, large or surprising proportions,” Mauer said. 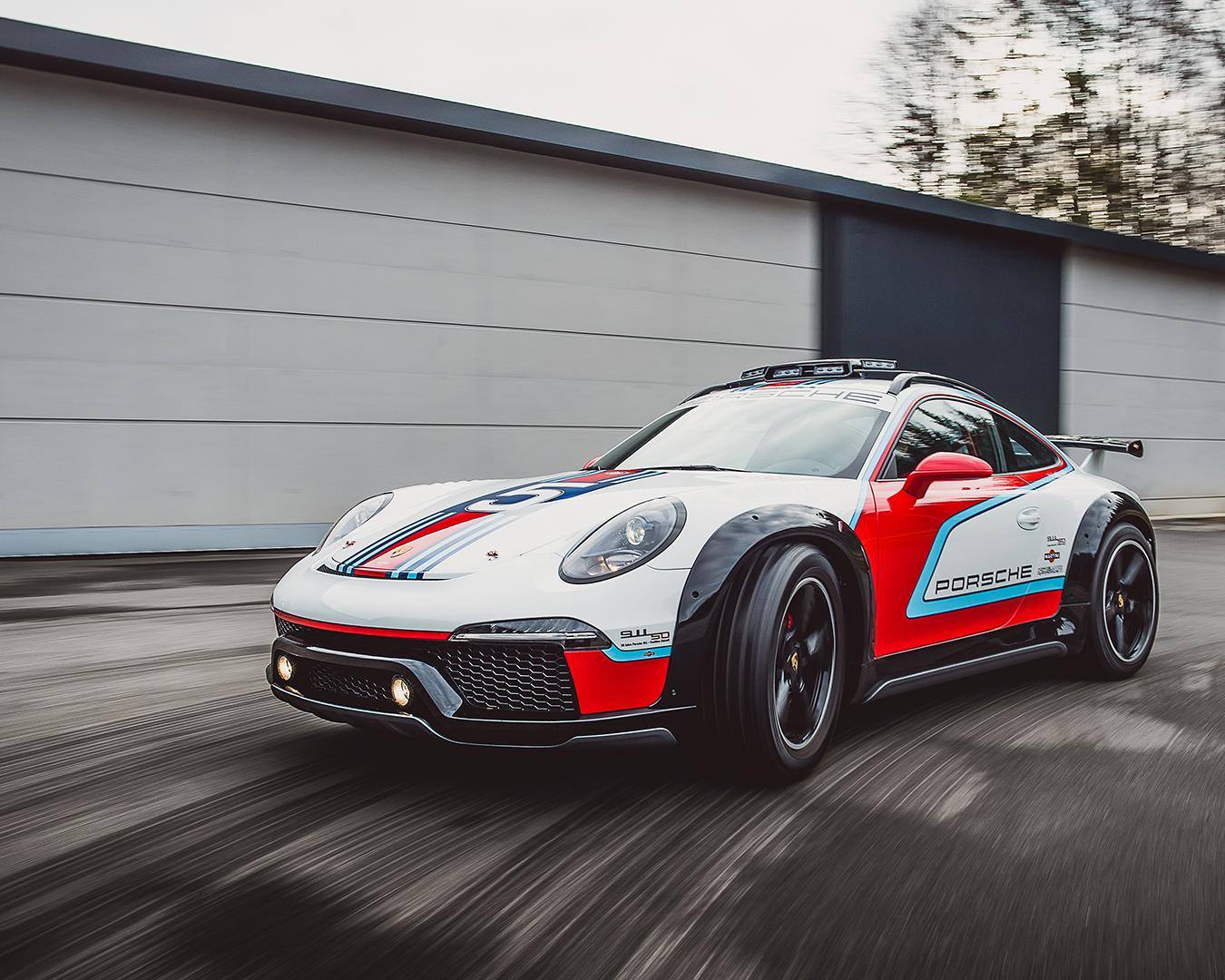 ‘Porsche’ and ‘Safari’ are two words that immediately evoke images of a rugged sports car tackling the wilds of 1970s rallies (including the Paris-Dakar) in the mind of any true Porsche fan. And it seems that’s the case for Porsche’s designers too.

This 2021 “mobile prototype” harks back to the 953 that entered the 1984 Paris-Dakar Rally, using a prototype four-wheel drive system. The Rothmans livery of the time is swapped for a Martini-based colour scheme but it has the same raised ride height, reinforced wheel arches and stronger bumpers that made the 953 such an icon.

There have been rumours from Europe that Porsche is seriously considering offering a Safari-style 911, with high-riding prototypes recently spotted circling the Nurburgring. Is this a sign of things to come… 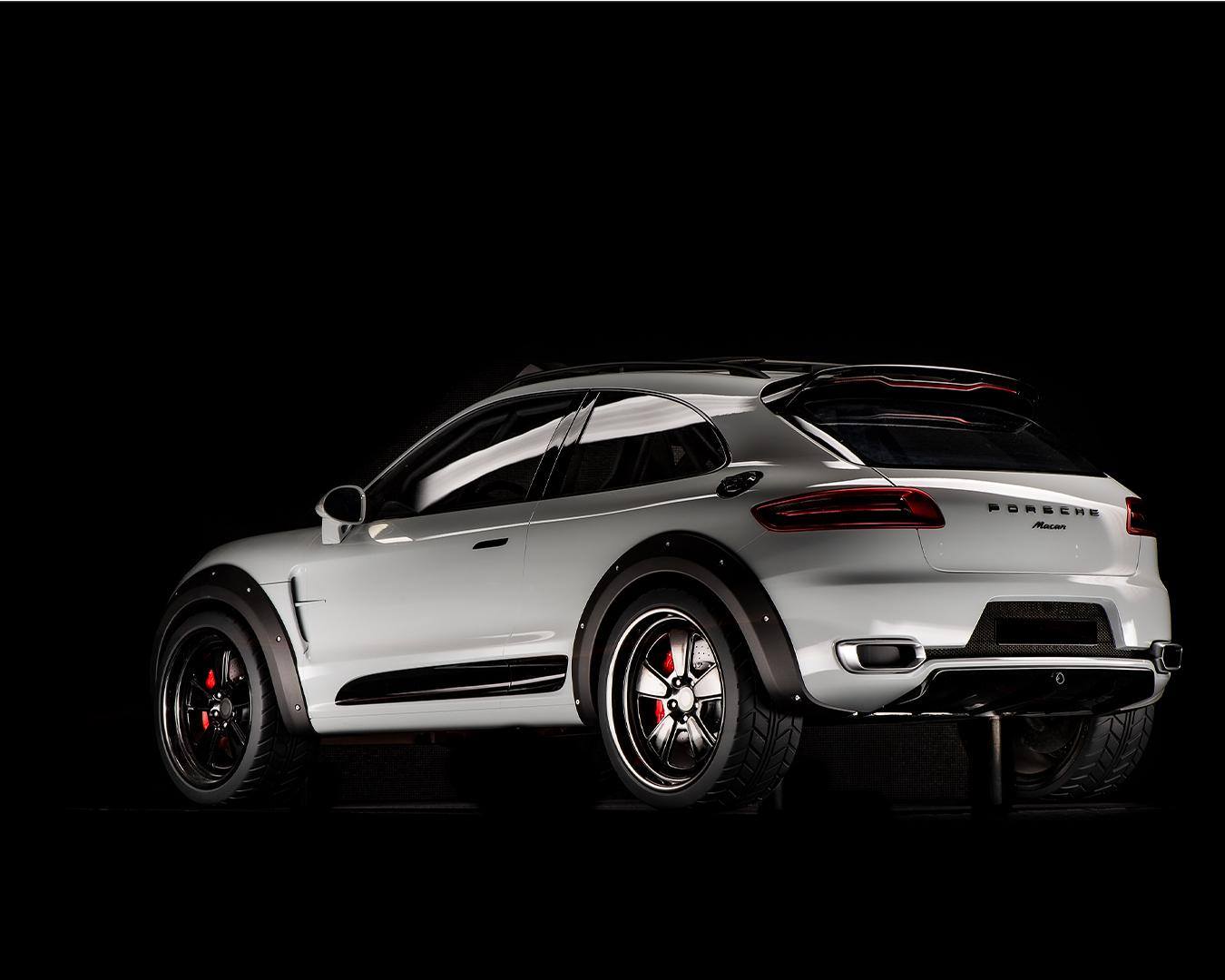 While Porsche used the 953 and then 959 to conquer the Paris-Dakar, it unfortunately never tried with its actual SUV models – the Cayenne and Macan. But that doesn’t mean they didn’t think about what its SUVs would look like if they did compete in cross-country rallies, hence this 1:1 scale model.

Featuring a unique three-door body as well as chuckier wheel arches the Macan Vision Safari certainly looks capable of getting its wheels dirty. And given the recent trend for ‘coupe-like’ SUVs maybe Porsche could revive the three-door idea for a future model. The Boxster is perhaps the most underrated model in the brand’s line-up. Often overlooked because it’s a convertible, and therefore seen as not a serious sports car, it’s razor-sharp handling disproves that thought as soon as you start driving it.

But there would be no doubt that this Boxtser Bergspyder is a serious corner carver. With its single-seat layout and giant Nurburgring sticker on the rear decklid, the designers have crafted an unmistakably track-focused machine.

Inspired by the 909 Bergspyder – the lightest racing car ever built by the company (just 384kg) – Mauer’s teams tried to strip as much weight as possible from the 981-generation Boxster to create this actual functional prototype. 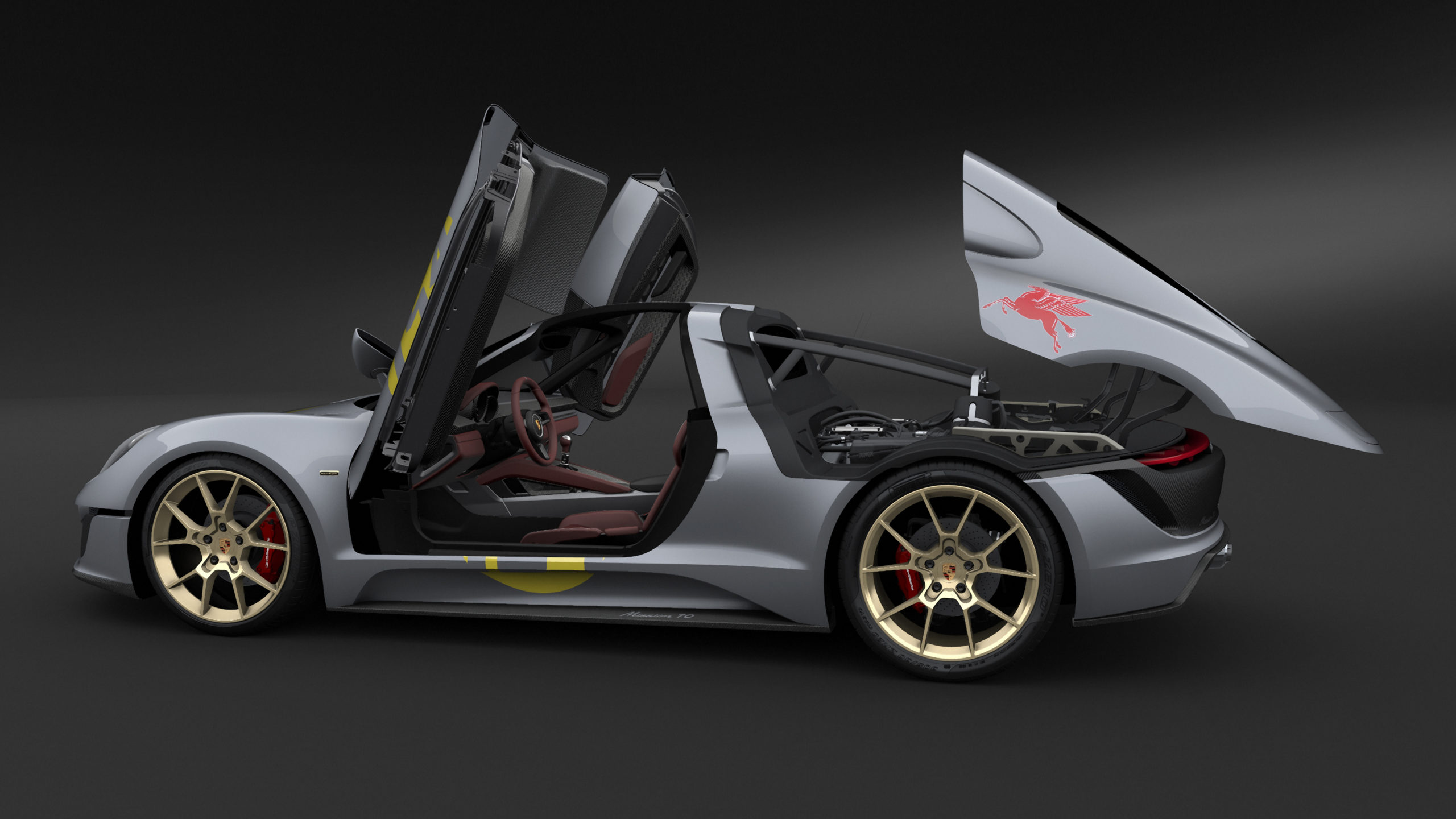 At a glance you might mistake this for an Alpine A110, but any serious Porsche spotter would immediately recognise its callback to the 1953 Porsche 550 coupe that competed at Le Mans.

As an ode to the original this full-size model has front and rear bodywork that opens in the opposite direction, as well as a racing number and Mobil Pegasus logo that were used in the ‘50s.

While it’s only a scale model, Porsche imagined a V8 engine would power this Boxster-based concept. What a shame that it never made it to production. 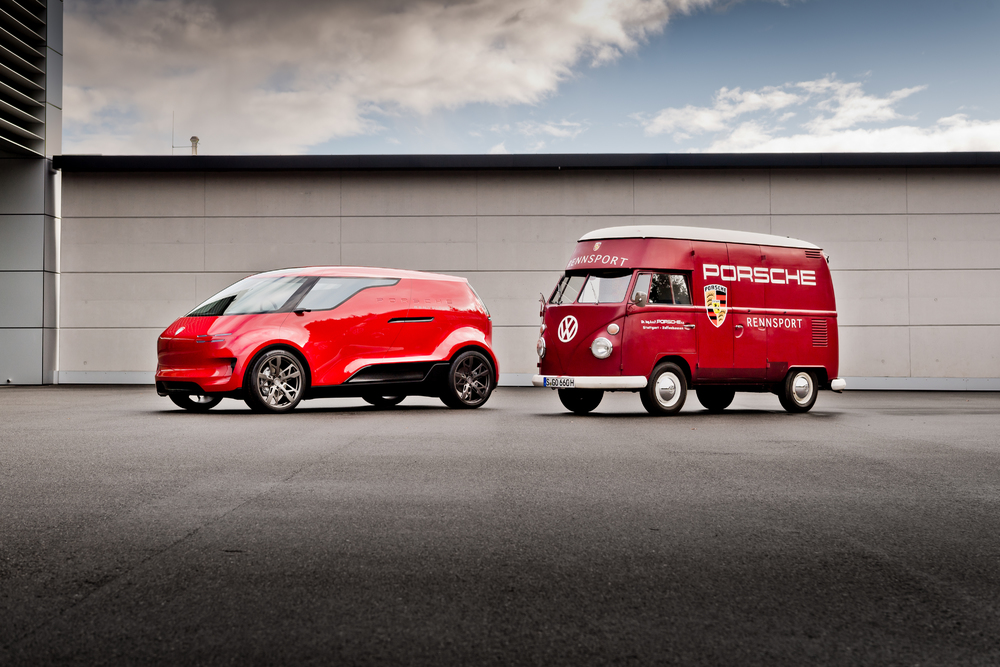 One of the main reasons Porsche has released these concepts is to show-off just how talented its design team car be when freed from the evolutionary styling restrictions created by its iconic 911, Boxster and now Cayenne models.

Nothing is more free-thinking than the Vision ‘Renndienst’ – a modern take on the company’s old Volkswagen Kombi used as a race support vehicle. Renndienst translates as Racing Services, and while the original series as a part and logistics support vehicle, this new one is an electric people mover.

There’s space for six passengers, with the driver seated centrally, sitting above the electric motors and batteries that run underneath the floor. 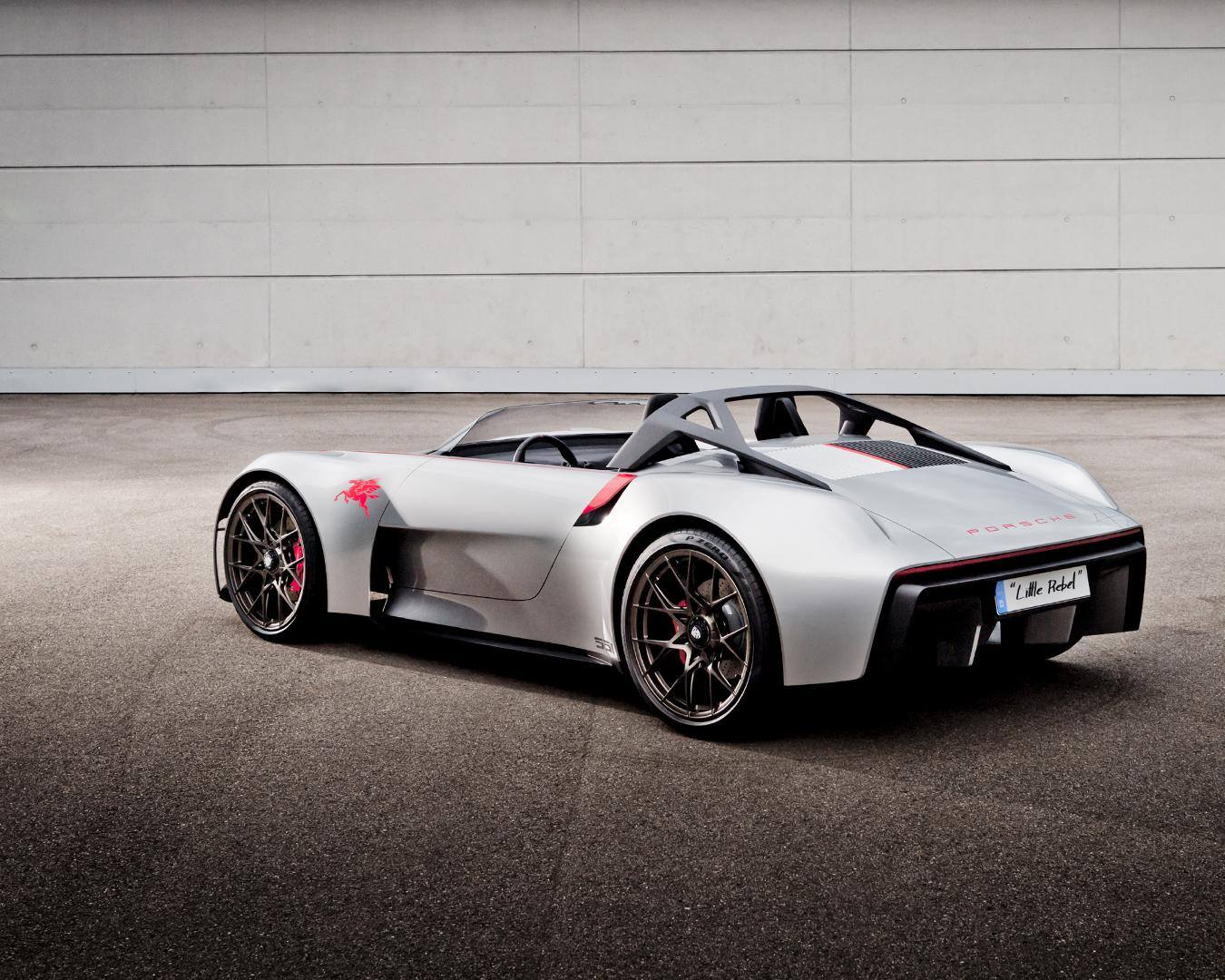 James Dean’s ‘Little Bastard’ is one of the most famous (or infamous, depending on your point-of-view) cars even built by Porsche. The 1955 550 Spyder has become immortalised by its famous owner, with both the actor and car enjoying an aura of coolness and sophistication.

No wonder then that the Porsche design team created this 1:1 scale model inspired by the 550 Spyder and even called it ‘Little Rebel’ and added numbers and Mobil logo like Dean.

But it’s not just a retro-take on the Boxster, it also allowed designers to think about how the next-generation of convertibles will look, with details like the new rollbar a possible precursor for future Porsches.