He won his F1 world title with Mercedes-Benz, but Nico Rosberg has helped arch-rivals Audi unveil its new electric performance car – the e-tron GT and its high-performance version, the RS e-tron GT.

“Electric mobility is the future,” the 2016 F1 champ said. “Of course the path to the goal is a long one. It’s great to see that Audi is taking this path with determination.”

READ MORE: Why Audi is taking on Dakar with an electric off-roader

Rosberg and di Grassi were just two of many celebrities that helped Audi conduct a virtual launch for its long-awaited electric sports sedan overnight, with actor Tom Hardy, designer Stella McCartney and singer Janelle Monae all drafted in to create hype around this new model. 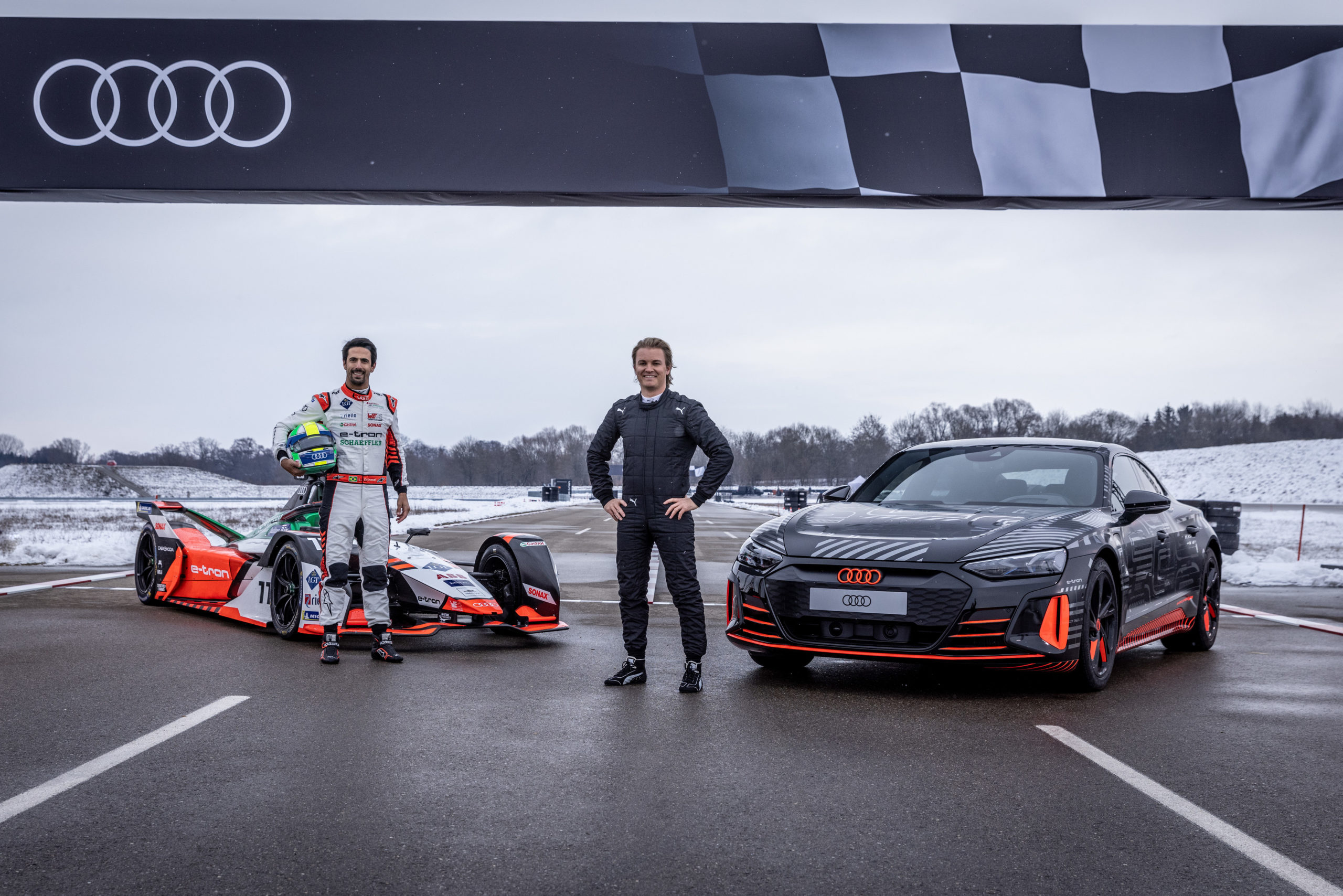 Not that the e-tron GT needs much hype, Audi has long-teased the arrival of the e-tron GT with a thinly-disguised concept revealed back at the 2018 Los Angeles Motor Show. Since then there’s been plenty of talk around what we could expect from a battery-powered sports sedan and Audi hasn’t disappointed.

Using the same platform as the Porsche Taycan, the e-tron GT electric motors make 350kW of power 630Nm of torque to provide it with genuine performance car credentials. In keeping with Audi’s quattro reputation, the e-tron has one electric motor on the front axle and one on the rear to provide all-wheel drive traction.

It also comes equipped with an 85kWh battery that Audi claims provides a driving range of 487km between trips to the powerpoint. While it’s a competitive range against its most direct rivals, the Tesla Model S and Taycan, importantly the e-tron GT is fitted with the same 800-volt charging system as the Porsche. That means it can get from five to 80 per cent charge in less than 23 minutes, and Audi claims that it can add up to 100km of range in just five minutes. If that’s not enough performance for you Audi Sport has its own version, the RS e-tron GT. It gets a more powerful electric motor that makes 440kW and 830Nm, enough to get it to launch 0-100km/h in just 3.3 seconds.

The RS e-tron GT will come equipped with “sports sound” as standard to ensure this special model has a suitable soundtrack. A pair of control units and amplifiers in the boot generate a unique sound that’s an amplification of the electric motors at work. The system is available as an option on the standard model.

Fitted to both is the Acoustic Vehicle Alerting System (AVAS) which produces a sound to warn pedestrians that an electric vehicle is nearby. Audi says the in its base setting (‘efficiency’) the system is louder than legal requirements, but can get louder and more noticeable for passengers in the ‘comfort’ and ‘dynamic’ drive mode settings. It’s not all about straightline performance though. The standard GT will come with controlled dampers, a rear-axle differential lock and Audi’s Drive Select handling system. While the RS version gets a controlled rear-axle diff lock and three-chamber air suspension as standard. Four-wheel steering is also available on both models.

The e-tron GT rides on 19-inch alloys as standard, while the RS gets 20-inch rims with the option to upgrade to 21-inch wheels and performance tyres.

Further cementing the e-tron GT’s place as a new performance hero of the Audi range is where it’s built – Böllinger Höfe. It’s the same factory that was built specifically to manufacture the R8 supercar and its GT3 racing variant; with the e-tron GT now added alongside those models. Audi CEO, Markus Duesmann, made it clear just how important this new model is to the four-ring brand’s future.

“The e-tron GT is a stand-alone Gran Turismo, reinterpreted for the future,” Duesmann said. “Its looks are a testament to premium automotive design. Bringing impressive driving performance, this is electro-mobility in the most emotive way. And with its sustainable concept, it takes a stand. Because it’s not just the drive concept that is sustainable. The entire production at our Böllinger Höfe site now has a carbon neutral energy balance.This sends an important signal – for the site, our workforce and the future viability of Audi.”

Both variants of the e-tron GT are expected to arrive in Australian showrooms in the third quarter of 2021, with local pricing and specifications to be confirmed closer to that time.