A newly-developed ‘torque splitter’ will help the upcoming Audi RS3 unleash its potential and drift, even though it will remain all-wheel drive.

The RS Torque Splitter replaces the Haldex rear differential that has long-served the RS3. It uses a pair of multi-disc clutches on each rear driveshaft to make “active, full variable torque vectoring between the rear wheels possible”, according to Audi. In simple terms it allows more drive to be sent to the outside rear wheel when cornering, which in turn helps reduce understeer. But, just as importantly for fans of smoking tyres, the RS Torque Splitter is able to send all the power to an individual rear wheel so you can drift.

Drift modes have become increasingly popular amongst European performance car makers as more and more models have had to switch to all-wheel drive to handle increased amounts of power and torque. Other cars that include a ‘drift mode’ include the BMW M5, Mercedes-AMG A45 and Ford Focus RS.

The RS3 has more grunt than before, even though it retains the same 2.5-litre five-cylinder turbocharged engine. The iconic five-pot now makes 298kW of power and 500Nm of torque, a 20Nm increase on the out-going model. 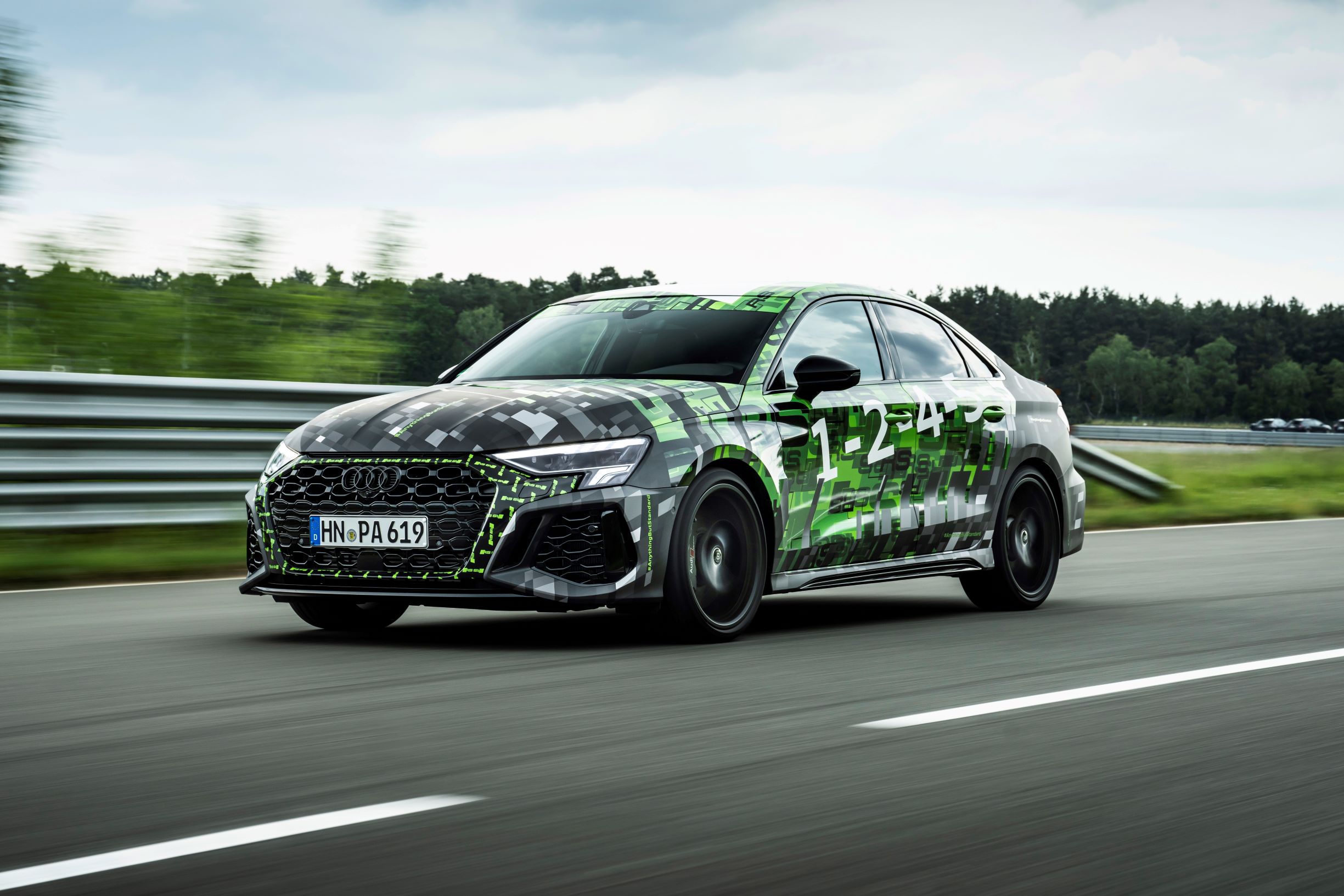 The combination of these changes, more torque and better traction, is the RS3 now accelerates faster than ever before, running 0-100km/h in just 3.8 seconds; a 0.3 second improvement on the old model. This was a key focus of development for Audi, with the company proudly claiming it is now “top in class” when it comes to running 0-100km/h, beating the 3.9 second claim of the Mercedes-AMG A45.

Audi has also increased the top speed of the model. The standard RS3 will run to a limited 250km/h but offers 280km/h as an optional extra. However, if that’s still not fast enough you can pay for the RS Dynamic Package that includes carbon ceramic brakes that bumps top speed to 290km/h. The German brand has teased the look of the new RS3, which will continue to be available as both a sedan and five-door Sportback, in these thinly-disguised preview images. As you can see, the Audi Sport bodykit gives the RS3 a more aggressive and purposeful look than the regular A3 range.

There’s a large single frame grille flanked by two very large air-intakes that help suck in cooling air for both the engine and the brakes. There’s also a vent behind the front wheel to further enhance the look of this crucial new model for the four-ring brand. The new Audi RS3 Sportback is expected locally next year

At the rear there’s a more aggressive rear bumper with air diffuser on both versions and a sizable bootlid spoiler on the sedan.