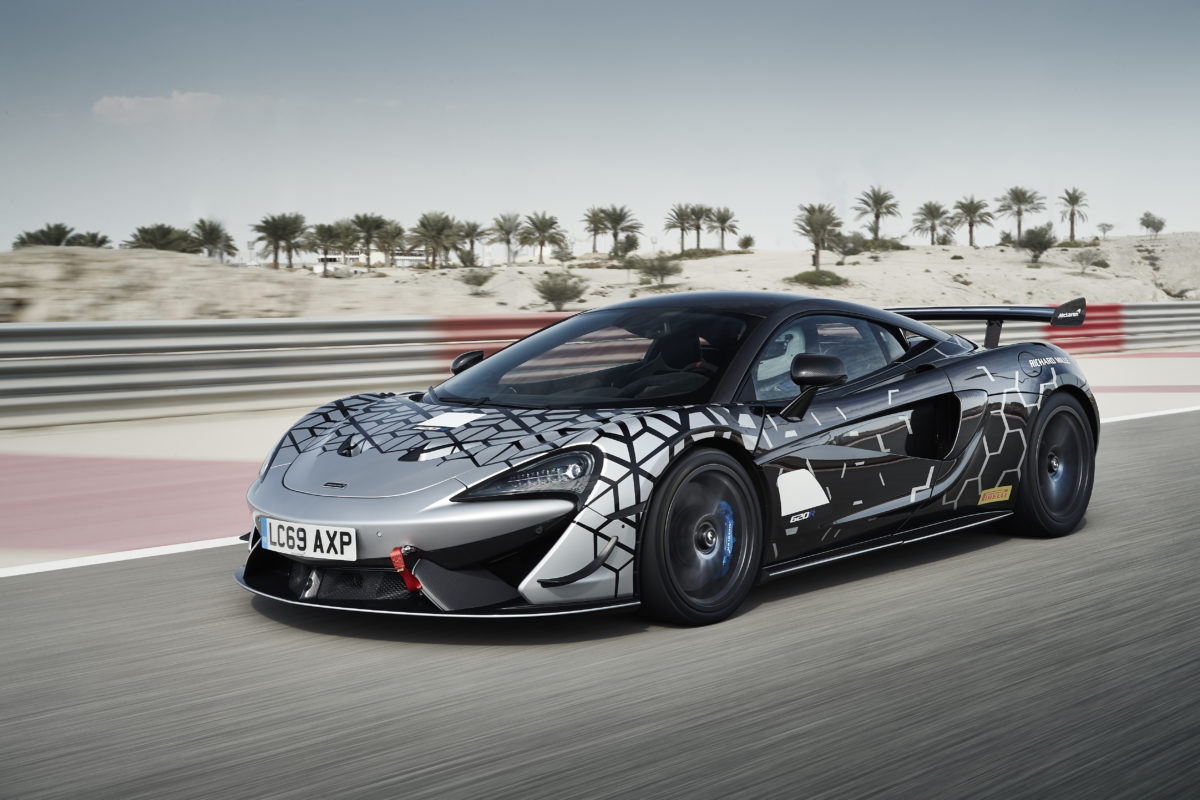 How do you celebrate a successful GT4 racing program? Well, if you’re McLaren you turn it into a street-legal, limited edition sports car.

Meet the McLaren 620R, a tribute to the on-track success of the 570S GT4; which itself started out life as a road-going sports car. But unlike the 570S-based 600LT mini-supercar, the new 620R can be driven on the road, but has the racetrack at the centre of its development.

The British brand has taken a range of components directly from the GT4 racer and adapted them for street use. These include the GT4 car’s recalibrated twin-turbo V8 engine, adjustable aerodynamics and track-spec adjustable suspension.

More powerful than the race car 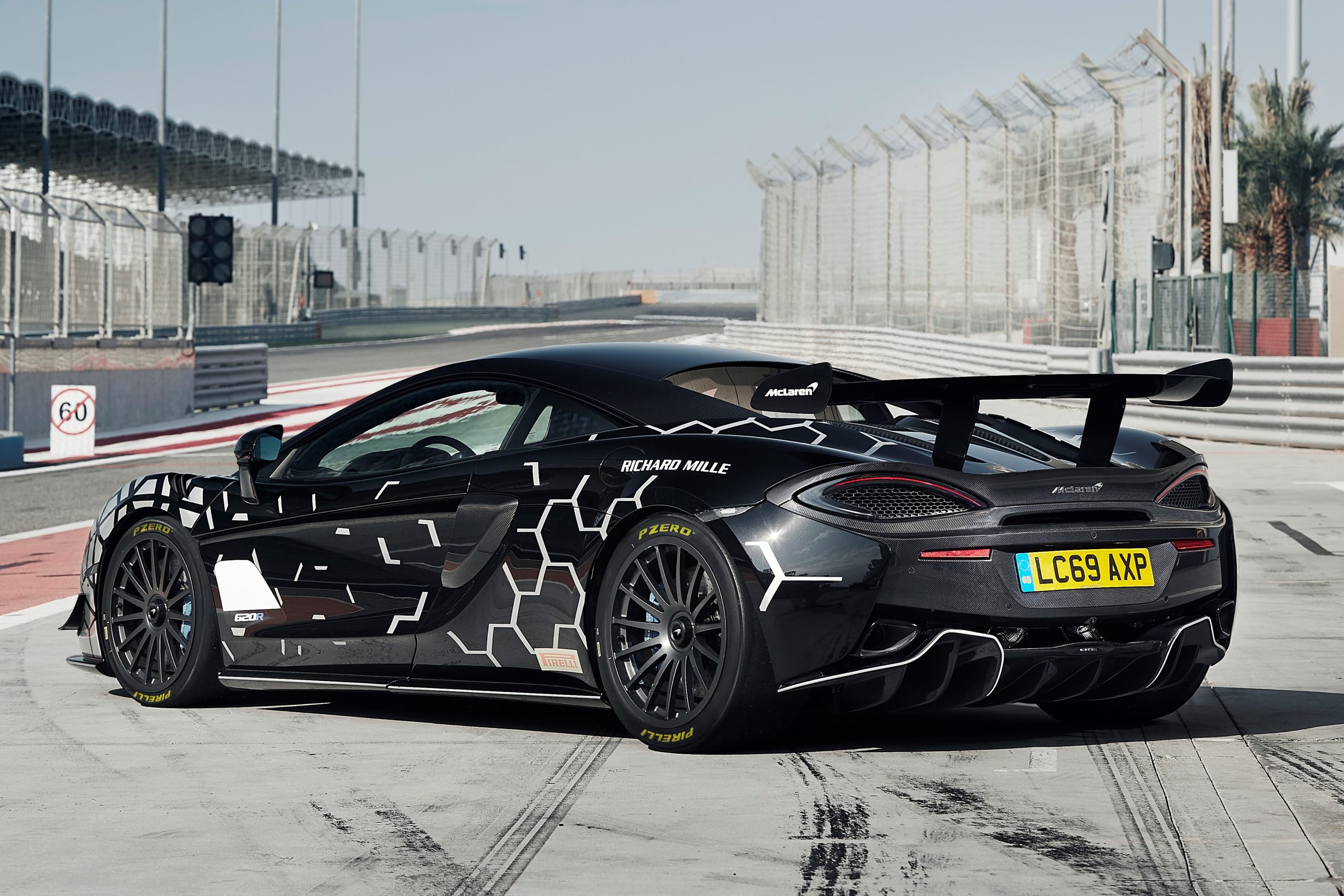 Built around the same carbon fibre tub as the rest of the McLaren range, the 620R is powered by the brand’s usual 3.8-litre twin-turbo bent-eight. But while the GT4 racing version is strangled by regulations to keep the competition even the 620R is unrestricted. Hence the name, which stands for 620PS (the German equivalent of horsepower), or 448kW in modern terms, with 620Nm of torque to boot. That makes it the most powerful member of McLaren’s Sports Series, edging the 441kW 600LT.

Maximising track time was the focus of the McLaren development team so it has integrated as many elements of the GT4’s equipment as possible. The suspension system includes the race car’s two-way manually adjustable coilover dampers, that allow the driver a massive 32 clicks of compression and rebound adjustment at each corner. Not only that, but the dampers themselves are 6kg lighter than the regular units on a 570S.

Then there are the tyres, with McLaren engineering the 620R so that owners can simply drive to the track and swap directly onto slick rubber without needing any further mechanical set-up changes.

For the road the standard tyre is a Pirelli P Zero Trofeo R semi-slick, wrapped around staggered 19-inch fronts and 20-inch rear alloy wheels. The optional Pirelli slick tyres have been developed specifically for the car by the Italian specialists working with McLaren. Fitting them increases the tyre’s contact patch by eight per cent over the Trofeo R, allowing for increased lateral G-forces when cornering.

Naturally the brakes have been upgraded too, with 390mm carbon ceramic discs up front, clamped by forged aluminium calipers. 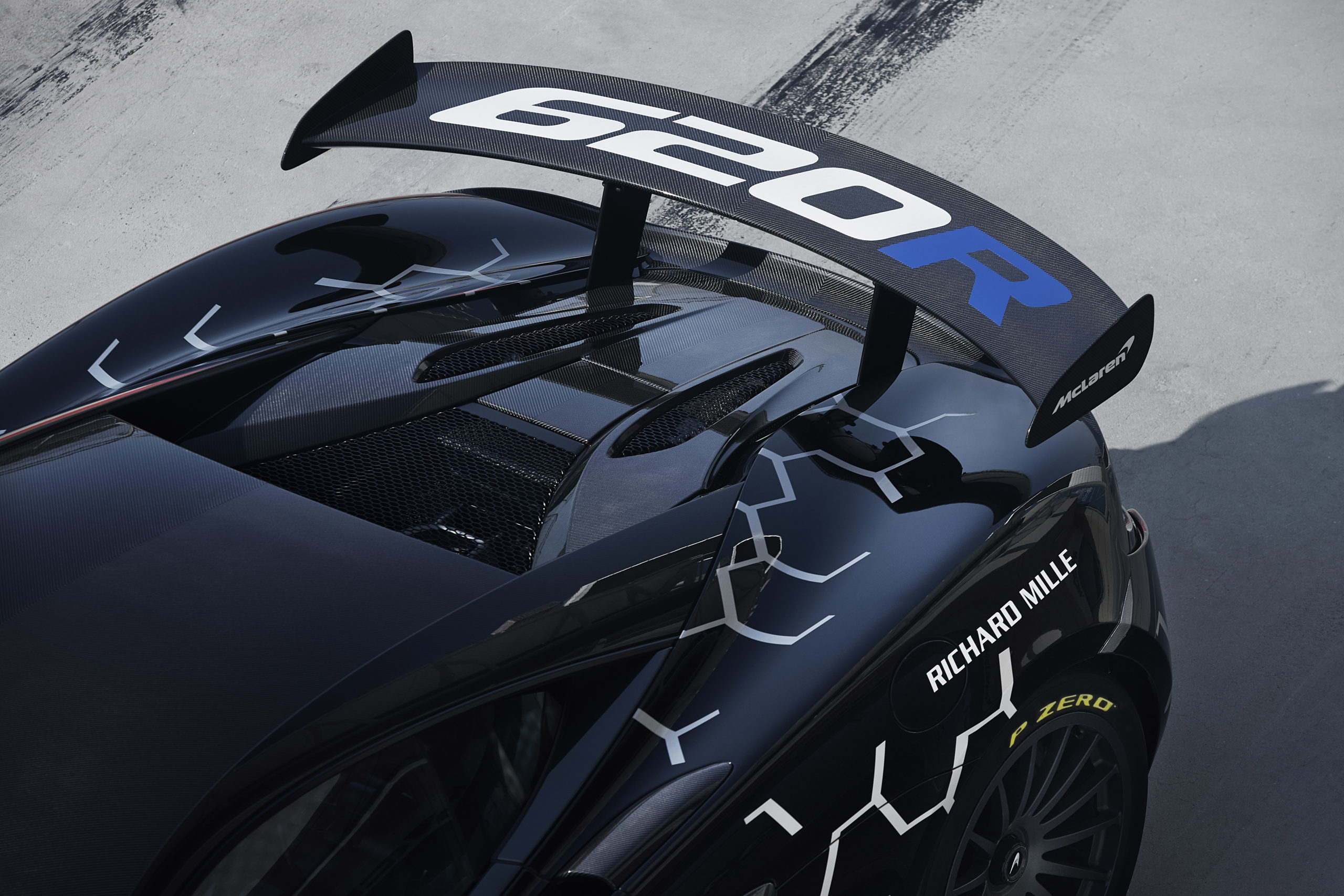 The aerodynamic package has also been lifted also directly from the GT4, with adjustable rear carbon fibre wing interchangeable with what you find on the 570S GT4, except for the addition of a road-required third brake light. But it still rises 32cm off the rear deck to supply downforce to the rear of the car while minimising drag.

At the front, the bumper, splitter, bonnet, air vents and dive planes are also taken from the GT4 to enhance downforce and cooling.

Inside the cabin has been stripped of air-conditioning, carpets, navigation and the stereo in a bid to save weight and shed lap time. Although, McLaren says you can option them back in if you prefer a few creature comforts.

McLaren said it was inspired to build the 620R after customers requested having a road car to match their racer.

“The McLaren 570S GT4 is a first-class GT race car that having won races in every championship it has competed in since its first appearance in 2017 is attracting an increasing number of customer racing teams,” explained Mike Flewitt, Chief Executive Officer, McLaren Automotive. “Now, in response to repeated customer requests, we have homologated that class-leading package for the road in the new McLaren 620R, a limited-edition, 620PS superlight coupé that is the perfect choice for an enthusiast wanting an authentic motorsport driving sensation – and performance to match – on both track and road.”

Only 350 examples of the 620R will be hand-built and each will be individually numbered, but McLaren isn’t saying how much they’ll cost. Only three colours will be available as standard – McLaren Orange, Silica White and Onyx Black, but customers with extra money to spend can get the brand’s customisation department, MSO, to finish it in whatever hue that desire – even a racing inspired livery similar to what appeared on several F1-inspired McLaren Senna GTR.